A Prolific Craftsman With a Wide Variety of Interests 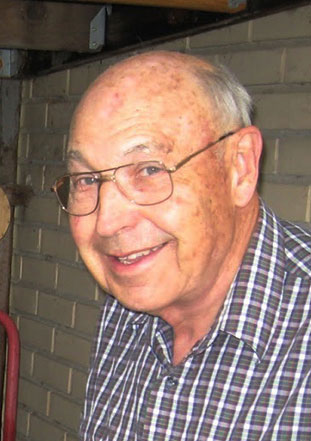 Birk Petersen made a wide variety of exceptional models and miniatures over his lifetime. In addition to the fine craftsmanship, much of Mr. Petersen’s work was delivered with a smile and a wink.

When Birk Petersen of Provo, Utah passed away in 2015, his family was unsure of what to do with all of the wonderful items that he had created. Mr. Petersen was a very productive model engineer for many years. The Petersen family wanted to honor Birk’s craftsmanship in a public fashion, so that his work could be enjoyed by others. We are pleased that they selected the Miniature Engineering Craftsmanship Museum in Carlsbad, CA as the appropriate place to do so.

Displaying this type of work and honoring the craftsman who produced it is exactly what Joe Martin had in mind when he started the Joe Martin Foundation over 20 years ago. The Birk Petersen collection, consisting of over 150 items, was introduced to the public at the museum’s tenth anniversary celebration on July 2, 2016. We thank the Petersen family for sharing this extensive collection, which demonstrates the broad interests and many talents of Birk Petersen.

The Wonderful World of Birk Petersen

Birk Petersen was born on May 1, 1933 in Axtell, Utah to James Raymond and Vennetta Petersen. His father worked 12-hour shifts at a sugar mill in Gunnison, and on several farms. Later on, Birk would follow his dad into the sugar mill. However, he always liked mechanical contraptions. He was likely born to be an engineer. The family still proudly retains the first model that Birk ever made—a wooden tractor—and the first tool box he received at age five.

As a young man, Birk enlisted in the Army and served as a welder. Later, he took advantage of the GI Bill to attend the Central Utah Vocational School in Provo, UT. Birk then started work as a draftsman at Pittsburgh Des Moines Steel in Provo, and eventually worked his way up to plant engineer. Birk married his sweetheart, Darlene on September 15, 1953 in Manti, UT. 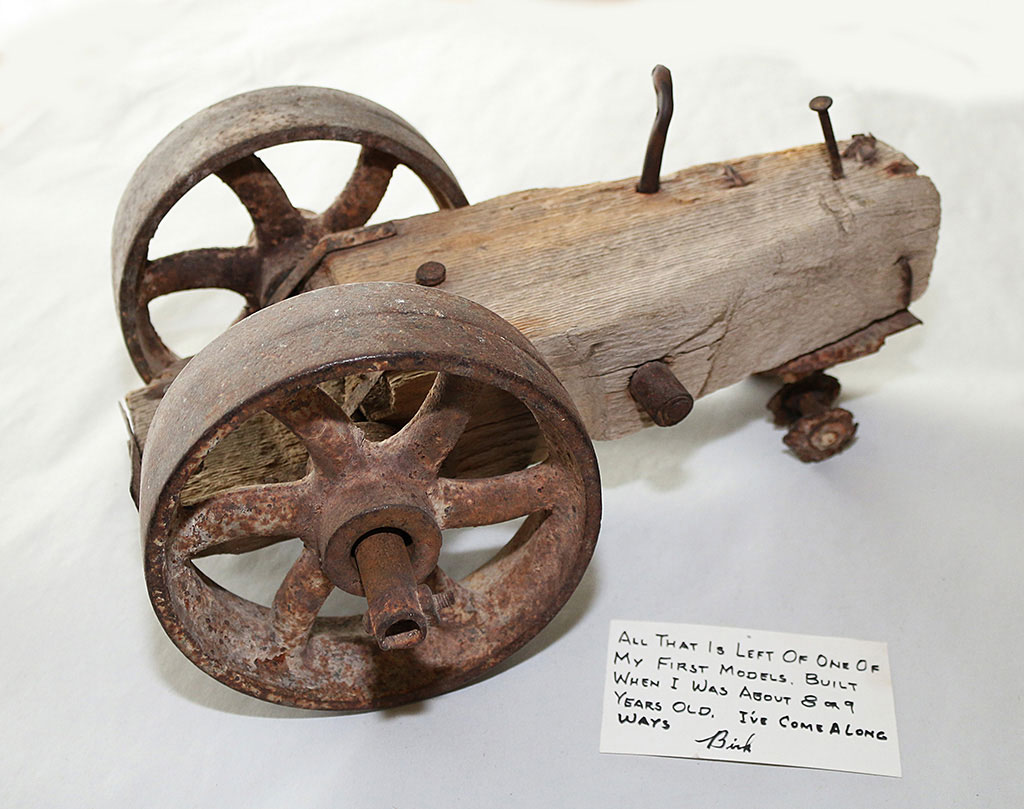 At about 8 or 9 years old, Birk made his first crude model of a tractor. This model is still on display as part of the Birk Petersen collection. 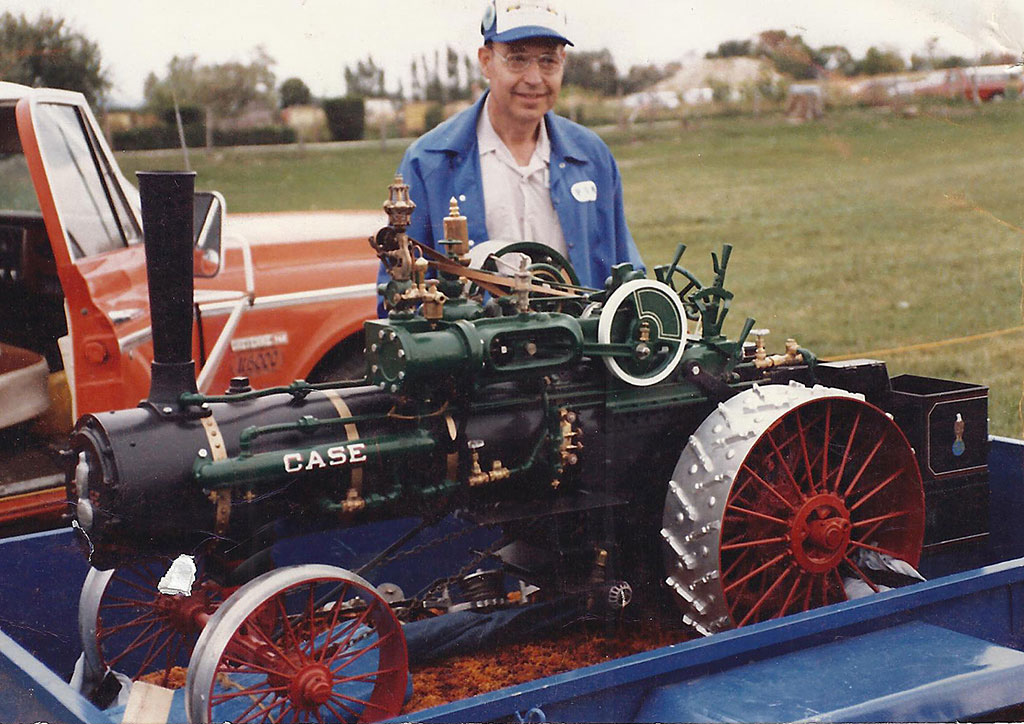 Birk Petersen at a tractor show with the 1/4 scale Case 65 hp steam tractor that he made in the 1980’s. The tractor took three years to complete.

Before that, he had served two years for Hammond Iron Works and Keys Tank. Birk’s work at Pittsburg Des Moines also include a two-year assignment at World Southern in South Carolina, where he served as plant engineering manager. All told, Birk’s engineering education was received over a 27-year period at Central Utah Vocational College.

In fact, Birk was one of three people honored for spending the most hours on continuing their education. During that time, Birk also taught adult education classes. Though he never achieved an actual degree in engineering, that never seemed to be Birk’s goal in the first place.

He took courses that gave him a chance to expand his vast knowledge of all things mechanical, along with anything else that interested him. As proof of his love of learning, Birk’s personal library was extensive, and often included books that reflected his research for different projects. 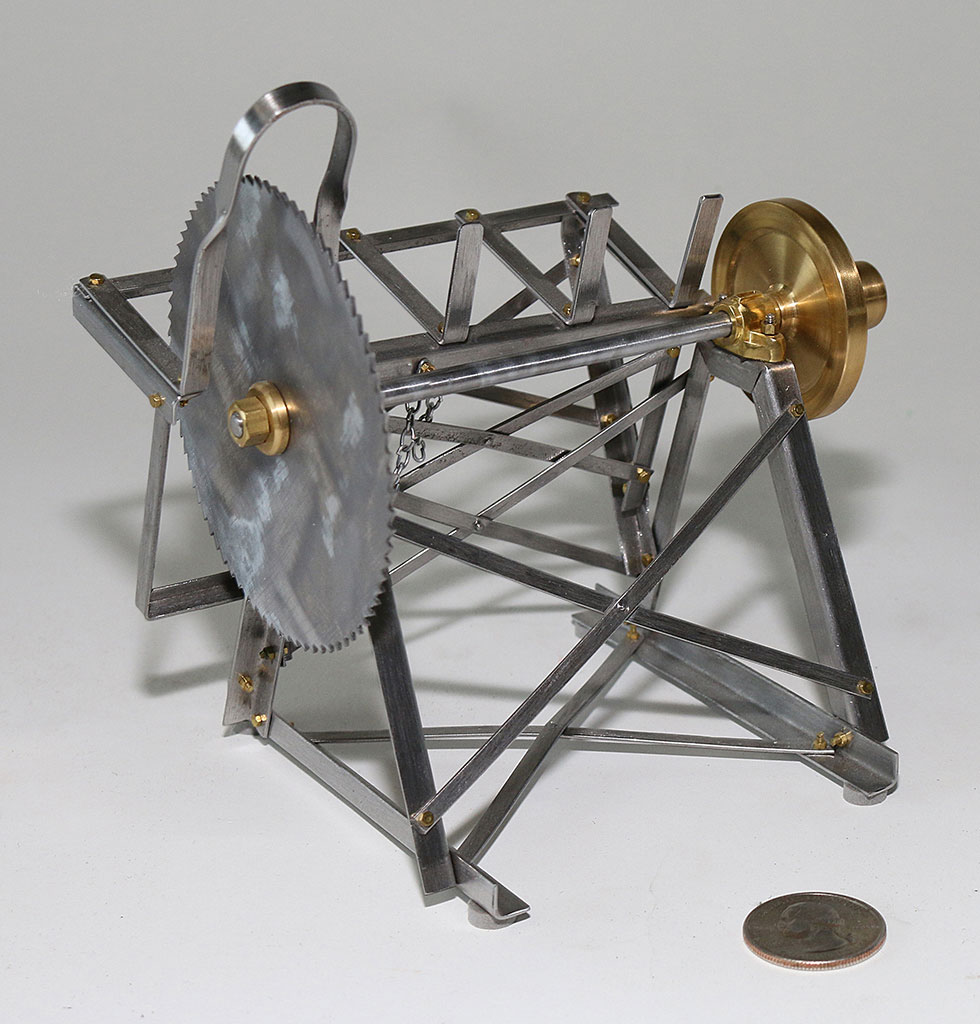 Birk’s miniature belt driven cord wood saw, which would have been used to cut firewood. A US quarter provides scale reference for the small model. 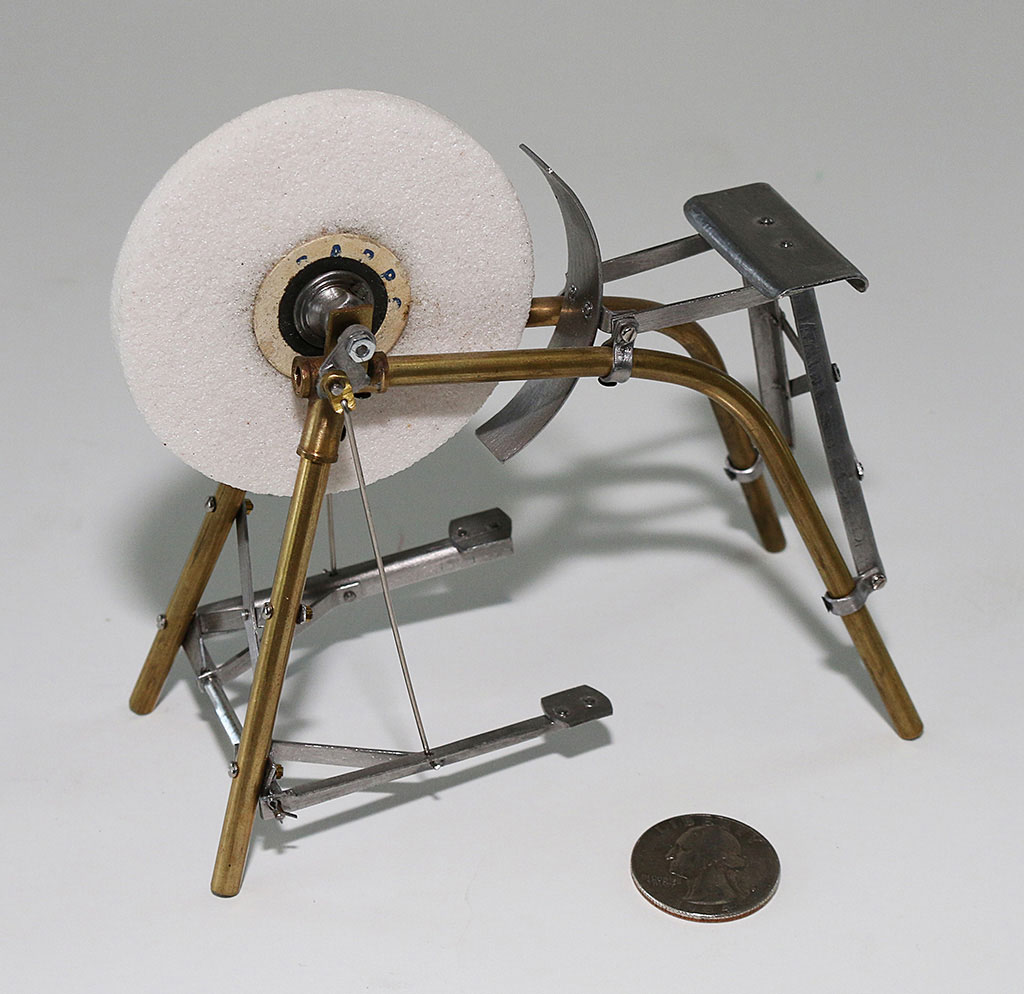 Birk’s miniature pedal-powered grinding wheel. The wheel is only about 2” in diameter. These grinding wheels were used to sharpen knives and other tools before electric motors.

A Passion for Machinery in His Career and Hobbies

In time, Birk’s first love of machining and metalworking eventually became his hobby. As a member of the Utah Antique Machinery Association, he collected and repaired antique gas engines and fabricated machines. Among the early machines that Birk made from the ground up was a 1/4 scale model Case 65 hp steam tractor, and a scale model sawmill that cut 1/4-size logs. His late wife Darlene noted, “I hardly saw him for three years when he was building that tractor.”

Later, Birk went on to build literally hundreds of projects. He made engines, toys, guns, a carousel, a musical wooden whistle calliope, and much more. Birk’s skills included everything needed to build the wide variety of projects that he undertook. This involved pattern making, casting metal, welding, machining, painting and carving wooden figures. If he needed a special tool for any specific operation, Birk simply made them himself. 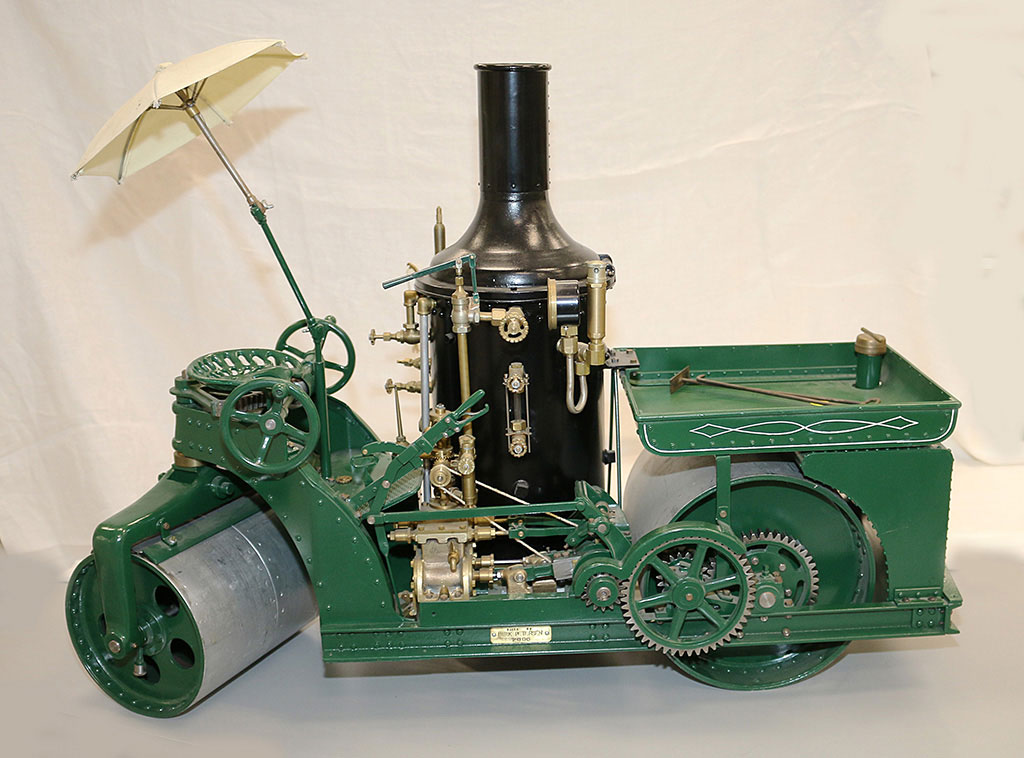 This massive model is a miniature duplication of one of the early pieces of road working equipment—the steam roller. This Buffalo Springfield steam roller was used for flattening the surface of roads. Birk’s accurate working model even includes an umbrella to shade the operator. He did all the castings himself, including the ornate driver’s seat. The Craftsmanship Museum display also includes Birk’s original hand-carved wooden pattern for the seat. 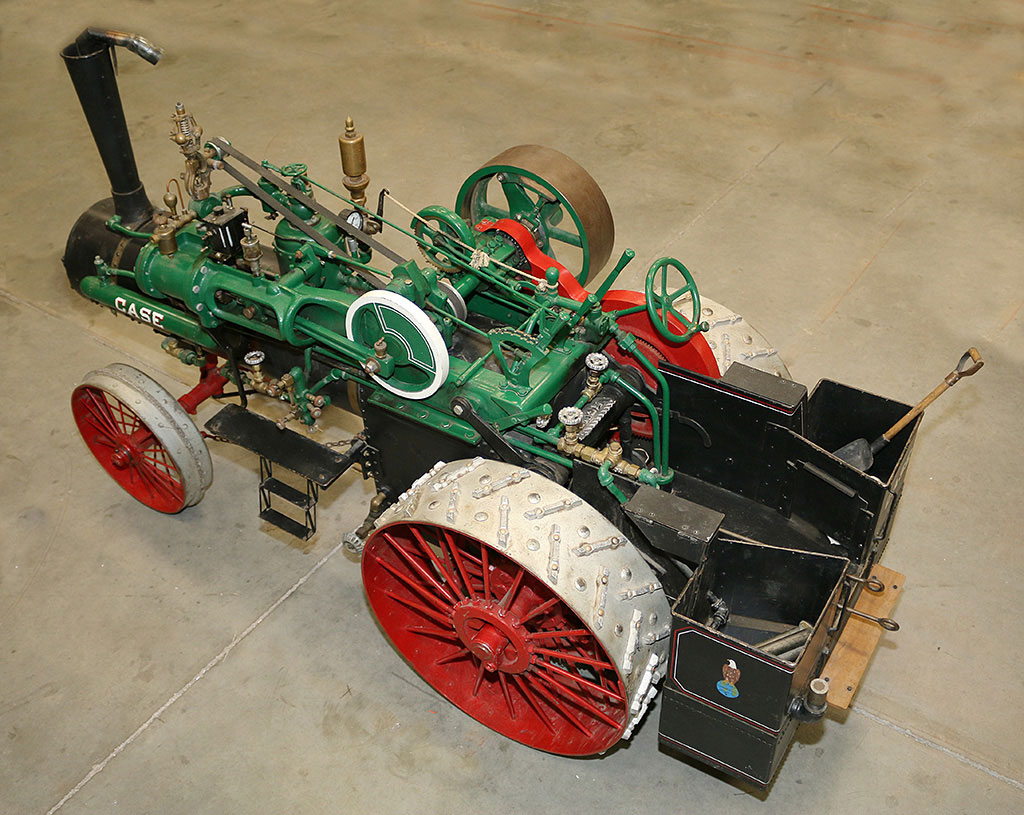 Birk completed his 1/4 scale Case 65 hp steam tractor in 1982. The boiler was tested to 475 psi. It took over three years to build. Birk started with a set of castings and plans, and proceeded to do all the machining, assembly, and painting himself.

Birk loved building steam engines, small scale models, and whimsical creations of his own imagination. He also loved showing his amazing collection to visitors. Some of Birk’s favorite visitors were the children who enthusiastically engaged with his models, many of which were functional to some degree. Birk also published an online blog documenting many of his projects. Watch a video of Birk demonstrating his box organ and some other creations for eager viewers. 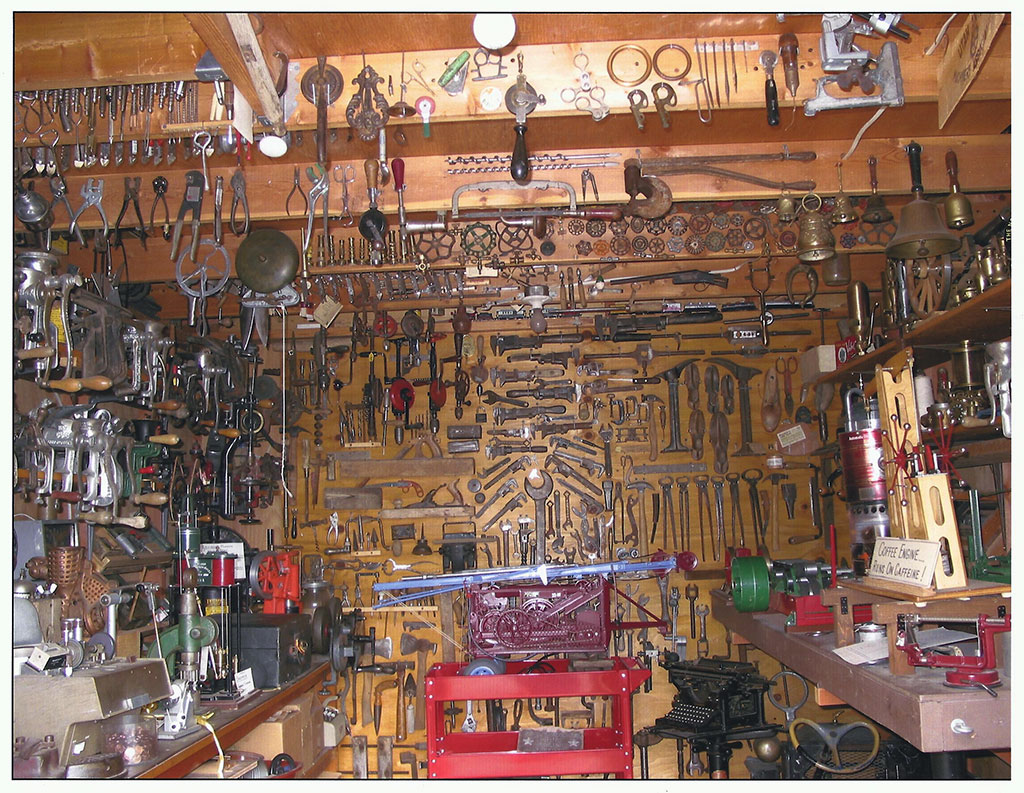 Birk’s carport, garage, and several outbuildings in his yard were packed to the brim with tools and treasures. These items were stuffed on every wall from floor to ceiling. This photo shows just a small portion of Birk’s collection, from tools to typewriters and everything in between. 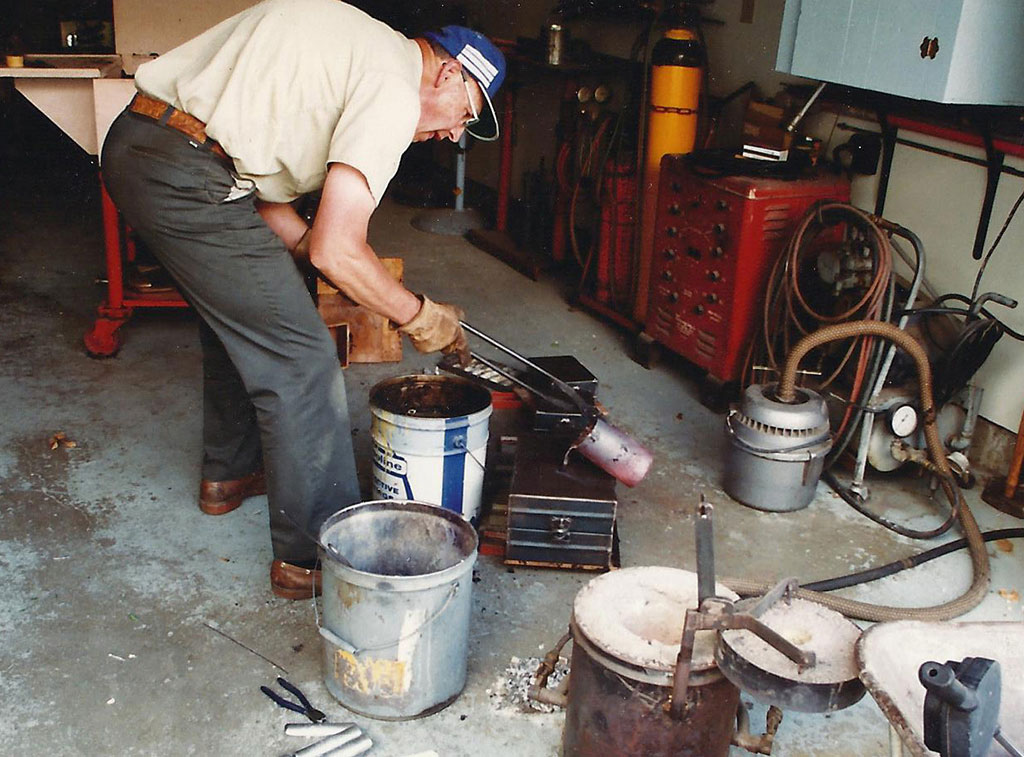 Birk liked to control every aspect of the design and build process. He’s shown here pouring molten aluminum into a sand casting pattern to make a part for an engine or toy.

Not Just a Builder, but Also a Collector

Along with his creations, Birk was also a collector of all things mechanical. His garage, carport and shop buildings were covered with items he had collected. This included egg beaters, meat grinders, can openers, gears, sprockets, and even faucet handles. If one was good, 20 were better. Despite the sophistication of his talents, the tools in Birk’s shop were not the reason for his excellent results.

It’s true that he had an extensive collection of hand tools, along with the basic machine shop tools like a milling machine, lathe, grinders, and saws. Even so, they weren’t fancy brand name tools. The fine results are a product of Birk’s skill more than anything else. Also, all of the machining was done without the aid of computer controls. 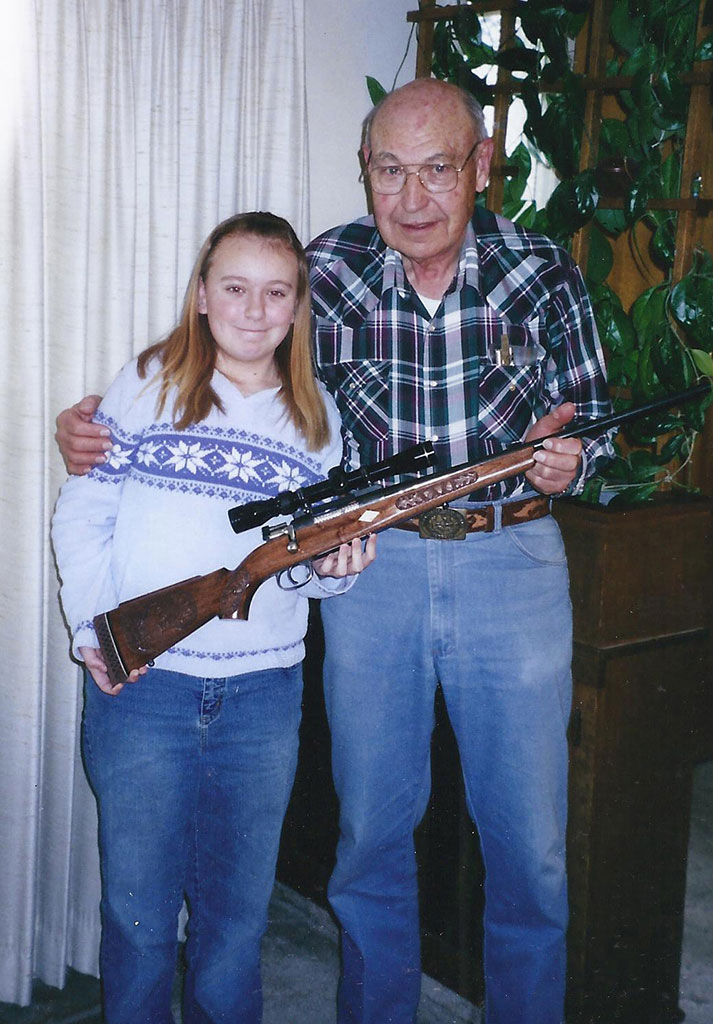 Birk presenting a rifle to one of his granddaughters. The stock was hand carved with a scene of a squirrel and leaves. Birk created several pistols and rifles in both full-size and miniature, being an avid hunter himself. 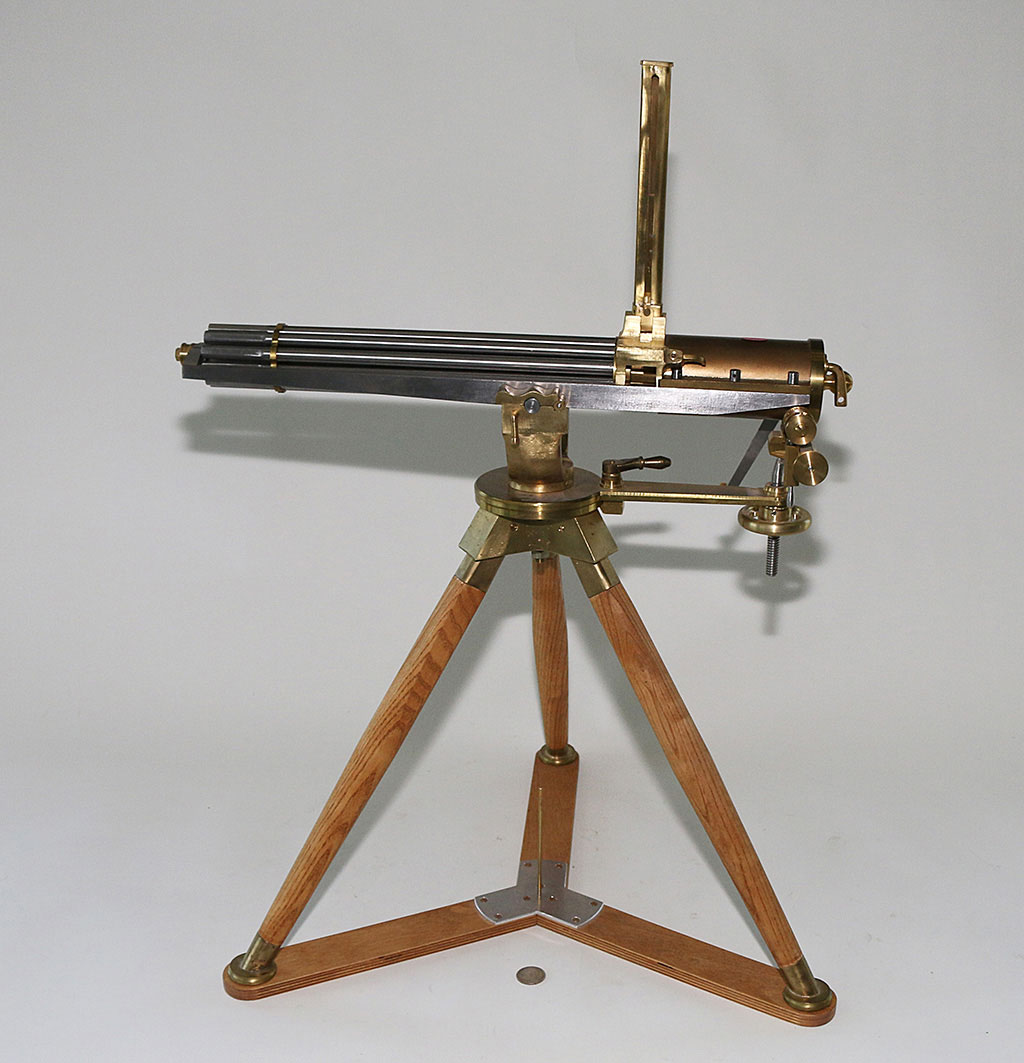 This functional 1/3 scale Gatling gun was designed to fire .22 caliber bullets. It’s mounted on a tripod and features a gravity fed magazine on top.

Building Toys With a Knack for Amusement

Notably, Birk’s sense of humor was evident in many of his creations. He loved puns and made several small pieces as “joke” projects. For example, Birk made a tiny coffin with a bolt inside titled, “Dead Bolt,” and also a small hammer that smacks a 25-cent coin which is called, “Quarter Pounder.”

The animations include a farmer milking a cow, a shoemaker pounding nails, chickens laying eggs, and a demonstration of just about every conceivable kind of geared motion. Birk’s other hobbies included restoring and remanufacturing antique machinery.

He built saw mills, steam and gas engines, rifles, pistols, and his wide array of hand-cranked animated toys. Birk also published articles on some of his projects in magazines like ModelTech, The Home Shop Machinist, Machinist’s Workshop, and Live Steam. 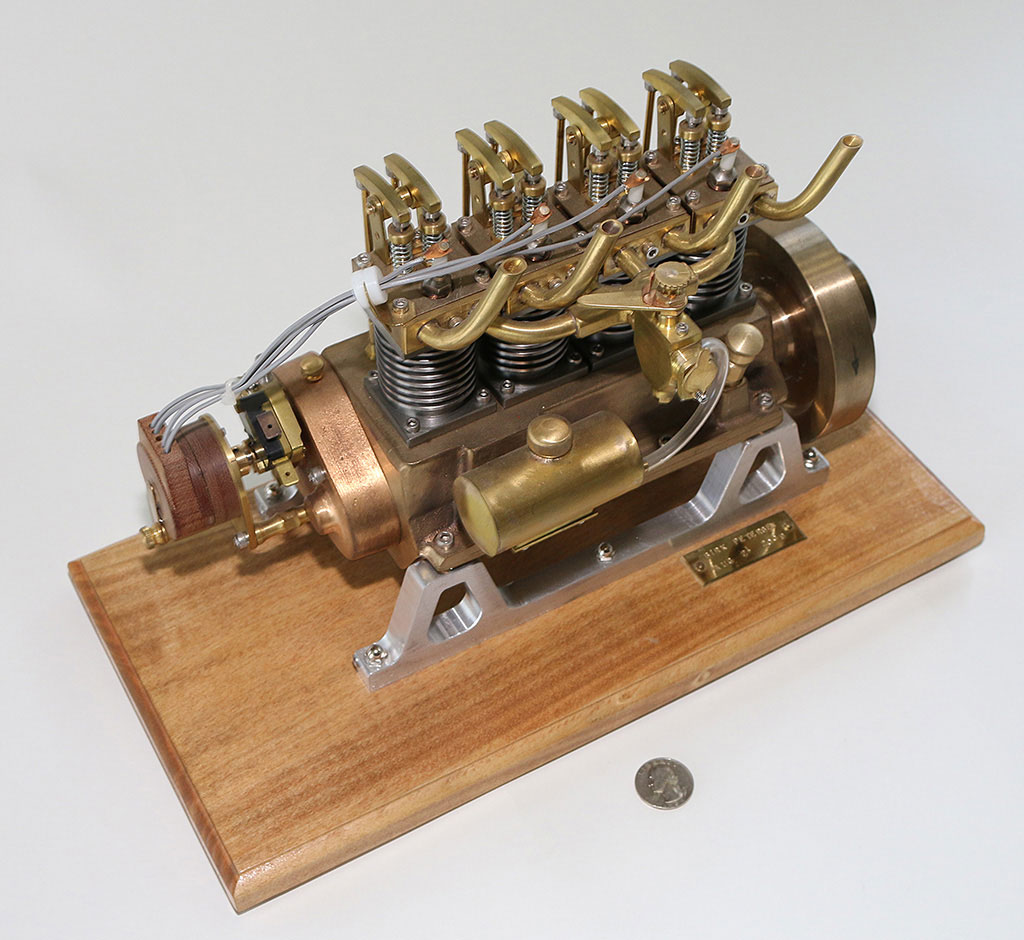 The Panther Pup is a 4-cylinder, 4-cycle inline engine model made entirely from brass. Birk built it from plans that were drawn by Bill Reichart. Two castings were available along with the plans, but Birk chose to cast his own parts. He then did all of the machining and assembly himself. 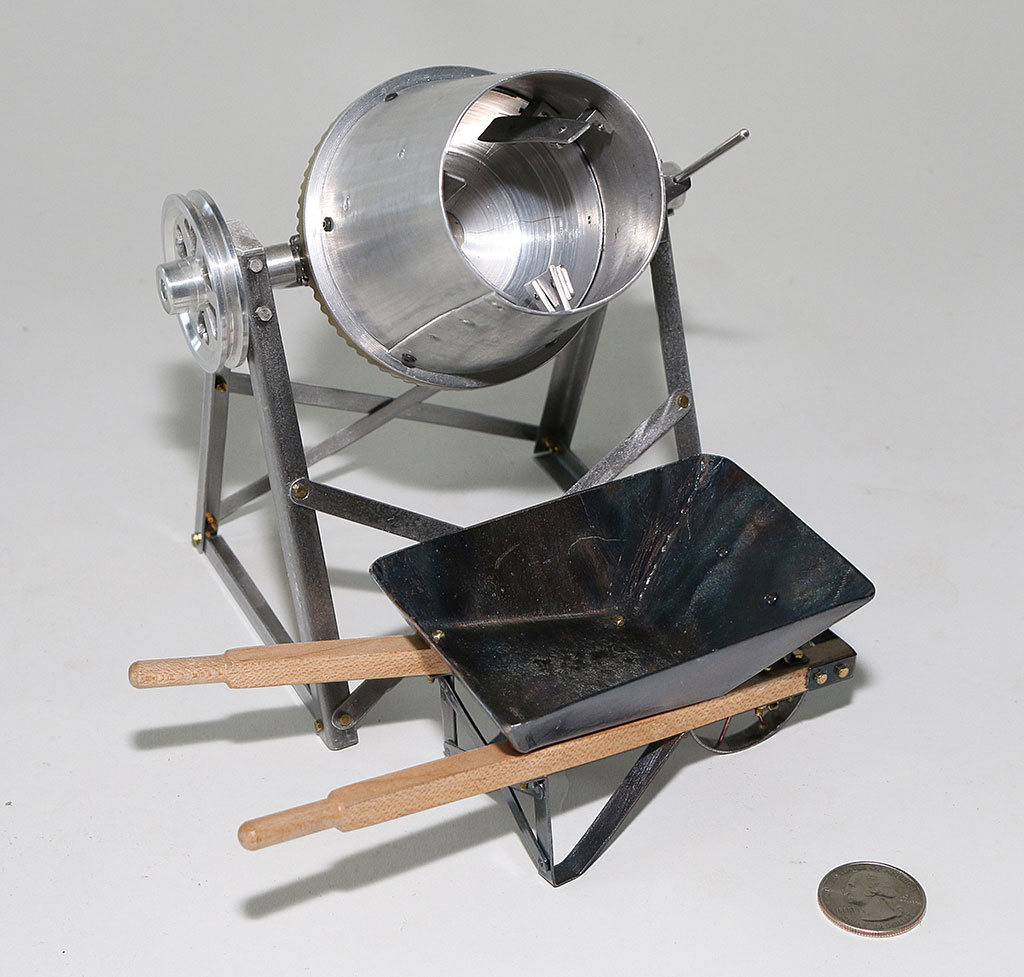 This miniature cement mixer was built from plans by Rudy Kouhoupt. Birk also included a handmade wheelbarrow in the same scale.

A Life Spent Exercising His Body and Mind

When Birk built projects for hobby, the design period often included reading about and learning new processes and techniques. His library of technical information was impressive. (It is now also available to visitors at the Craftsmanship Museum as part of our library.) In terms of physical fitness, before retirement Birk’s dedication to health and exercise included riding his bicycle to work every day. The daily ten-mile round trip wore out two bicycles, and Birk logged over 40,000 miles on a third.

Although he could have easily motorized it, Birk invented a bicycle-powered lawn mower so that grass cutting would still involve some exercise. Among his many activities, Birk was also heavily involved in the Boy Scouts for over 30 years. He served as a Scoutmaster and a merit badge councilor for over 20 different badges. Birk received the Silver Beaver award for his participation. Under his tutelage, over 150 boys moved through the scouting ranks to achieve the top rank of Eagle Scout. 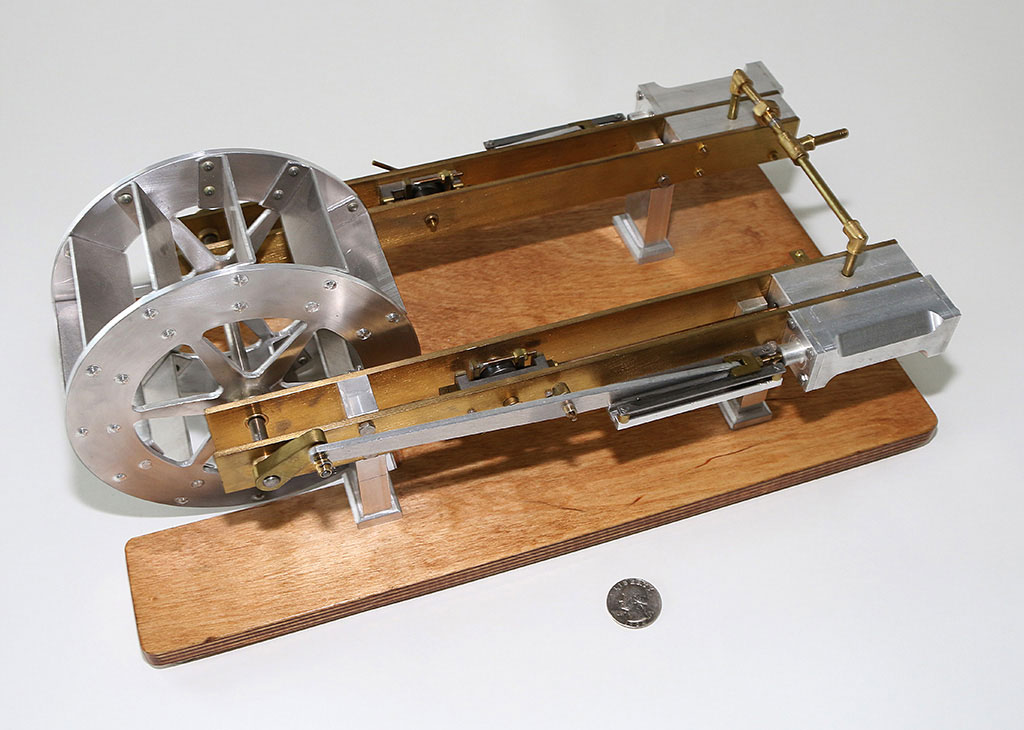 This riverboat paddlewheel is driven by a dual horizontal steam engine—all built by Birk. A US quarter provides scale reference. 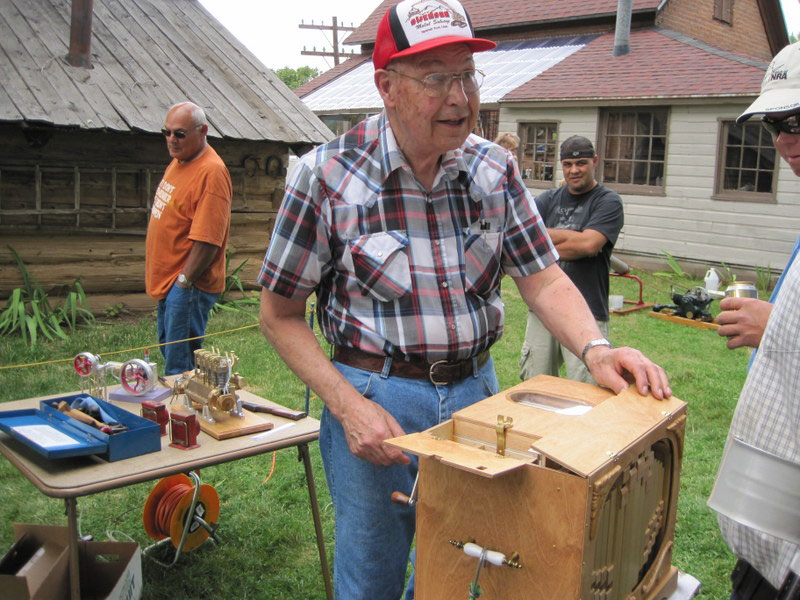 Birk was a youthful 82 years old when he passed away due to complications of surgery. Looking at the vast number of projects he created over a lifetime, we can only wonder how many more Birk might have produced, because he certainly wasn’t slowing down. He had mastered many facets of design, engineering, and production. Thankfully for the public, Birk’s family has kindly donated most of his life’s work for display at the Miniature Engineering Craftsmanship Museum in Carlsbad, CA.

Visitors can see the wide variety of projects that Birk made, and watch some of his hand-cranked animations in motion. His beautiful carousel still spins, and the box organ plays tunes to captivate an audience, just as Birk intended.