In Memory of Joseph H. Martin 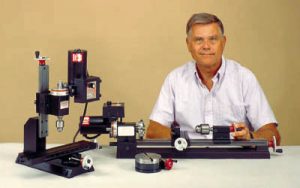 Joe Martin with the Sherline lathe and mill. The sale of Sherline tools provides the main funding to support the Foundation and museum.

Joe Martin grew up on the East Coast and started working in the building trades after graduating from High School in Cranston, RI. While employed as an asbestos worker, he found time between jobs to build and fly model airplanes. Radio control was still in its infancy, but the prospect of operating a model plane through take off, flight, and landing was a dream come true for him. He was an exceptional builder and innovator, and this was especially true when it came to making his own planes. As a result, his models were some of the most competitive among his peers. Joe was also one of the founders and early champions of the sport of Formula 1 aircraft racing. Despite these ventures being seen more as hobbies, Joe’s entrepreneurial sense and knack for improvement would help him to make a living out of it. After moving to California, Joe eventually started making parts for the newly formed radio control industry. He soon left the building trades to work full-time making components for the hobby he loved.

After the radio control giant Kraft Systems purchased Joe’s connector company, he decided to develop new products with them for a while. However, after some time Joe wanted to get back into a business of his own. He left Kraft, and started importing Sherline lathes from Australia to be sold domestically under the Craftsman label. Ultimately, Joe would go on to purchase the Sherline name, and to bring complete production of the tool line to the U.S. Over the course of more than thirty years, Joe built the Sherline brand into one of the most complete tool lines in the world. But after a while, Joe wanted to show his appreciation for the craftsmen who were using these tools for their own projects. 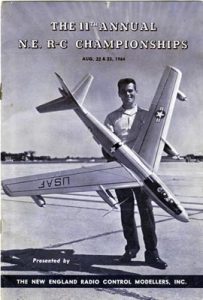 Joe Martin and one of his models on a contest program cover in the 1960’s.

In 1997, he started the Joe Martin Foundation for Exceptional Craftsmanship with a donation from his personal funds. Joe created the foundation to encourage and reward craftsmanship, placing a special emphasis on metalworking and woodworking of smaller scale. Through the foundation, and Joe’s vision, the Miniature Engineering Craftsmanship Museum was born. To learn more about Joe Martin, read his story in Making a Business Out of a Hobby. 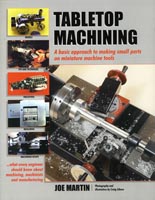 Joe also wrote a book on metalworking using small machine tools. It’s called Tabletop Machining, and can be purchased through Sherline as part number 5301. Anyone operating small machine tools can learn the basics of making precision metal parts with this book. The advice and setup photos can be applied to any brand of machine, but because Sherline machines are shown in the examples, the book is especially valuable for Sherline owners.

On February 12, 2014 Joe Martin passed away. We will honor the goals he established and see that they are carried on into the future as he intended.