Joe Martin Foundation Craftsman of the Year Award Winner for 2007 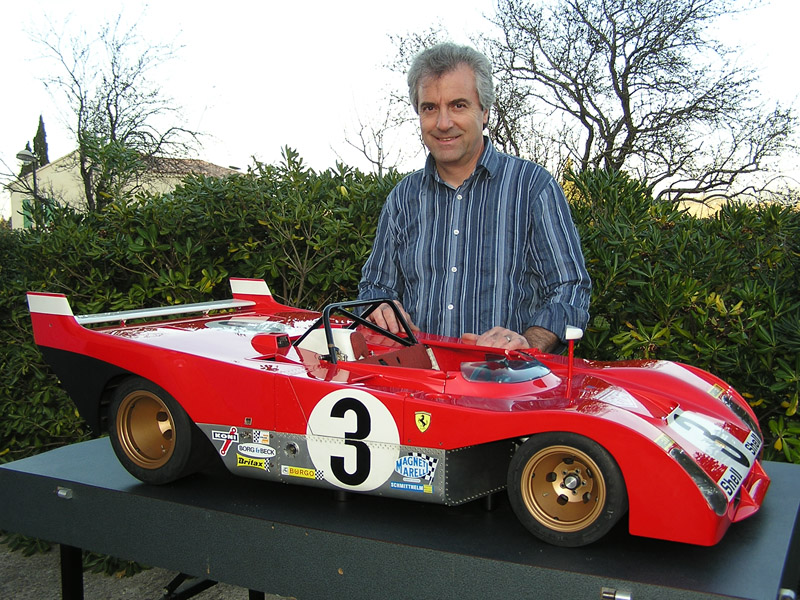 Back in the 1970’s, Pierre Scerri was a huge racing fan. In particular, he loved the look and sound of the Ferrari’s that graced the European races he attended. As a young telecommunications engineer, Pierre wanted very much to own such a car, but realized there was no way he could ever afford one. If he wanted to have a car like that, he would have to build one himself. He started by making drawings of each part of the car—a project that took three years in itself—working solely from photographs of the real car. Then, Pierre began the actual construction of the car.

This was a mammoth task, and the 12-year building process took Pierre on a journey through virtually every process needed to build the full-size car. He learned to mold his own rubber tires, cast his own headlights, make his own battery, weld the tube frame, and build the shock absorbers. He also had to undertake many delicate tasks, like making a miniature tachometer and other working gauges. Pierre learned the drawing and machining skills necessary for these tasks by reading books—he was never trained in these subjects while in school. 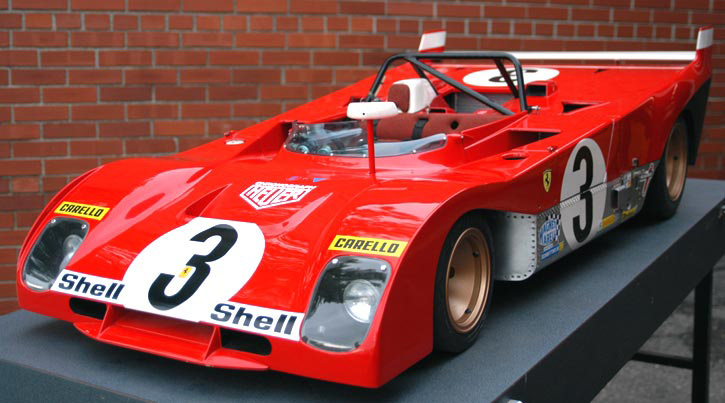 Pierre calls his Ferrari, “a dream—a car you can park in your dining room.”

Of course, Pierre also needed to build the running 100 cc, fuel injected, dry sump, flat 12-cylinder engine—the heart of the car. The engine itself took three years to build. In fact, just tuning the exhaust to get the proper “Ferrari music” took almost six months (and three different sets of exhaust pipes) before Pierre was satisfied.

In order to learn pattern and mold making for the castings, Pierre attended a foundry school in Marseille. The bodywork, upholstery, and electrical system all had to be fabricated from scratch. The only part that required some collaboration, because of its exotic metallurgy and tight machining specifications, was the gearbox.

For this, Pierre was able to work with Colleti, the famous builder of the full-size Ferrari racing gearboxes. They lent their expertise in making the actual gears used inside the cast case. The 5-speed box also has a working reverse gear. In total, Pierre estimates that over 20,000 hours were devoted to completing the car, which was finished in 1992.

After digging through leftover supplies, the upholsterer found an actual piece of the original material used in the full-size car, which Pierre then used for the model. Naturally, the pattern in the material is not scaled down to 1/3; however, Pierre felt it was worth the compromise to have the opportunity to use the actual material from the original.

Additionally, the fuel system in Pierre’s Ferrari is pressurized just like the real car. In order to get the car to run, fuel is added with an electric pump into the filler cap near the driver’s right side. An overflow bottle is inserted into a fitting on the cap on the left side. When the tank is full, fuel overflows into the catch bottle on the left side. The pump is then shut off, the fuel filler line is removed, and the catch bottle is removed—just as a pit crew would do it with the real car!

A little special oil is mixed with the fuel to keep fuel lines and other components from corroding. This is why you will see some smoke when the car is run. Pierre also noted that after being run many times since its completion in 1992, the engine has never been rebuilt, and the rings could probably use replacing. 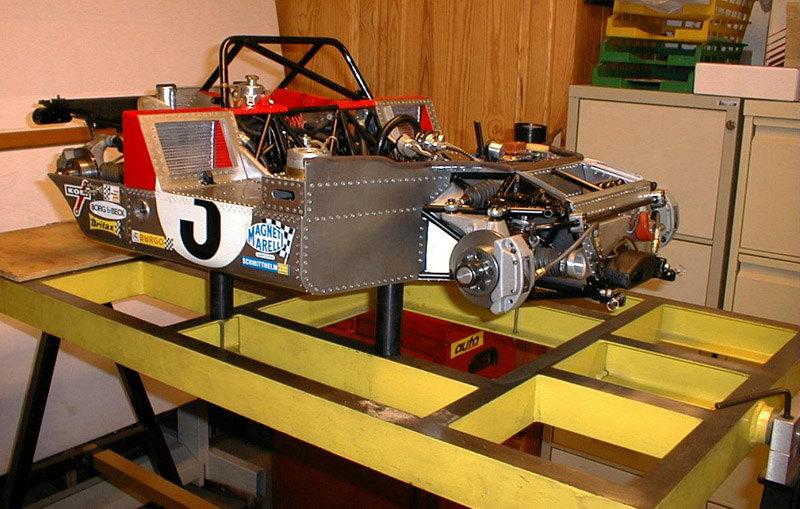 A right side view of the race car with bodywork and wheels removed. Notice the mounting table that holds the car, which can be rotated so that all parts of the model are easily accessible. 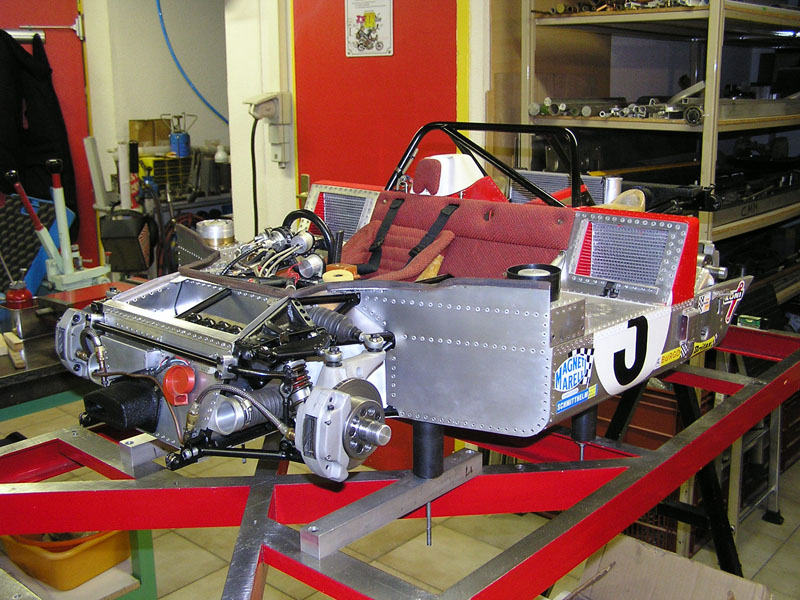 Another angle of Pierre’s Ferrari with bodywork removed.

At the time of this writing, a second car was under construction which would wear the number 30. The original #30 car won at Buenos Aires in 1972, with Peterson and Schenken behind the wheel. This model will run on gasoline, and be fired by 24 actual spark plugs (2 per cylinder). It will also have a built-in electric starter, which will work with the turn of the key, rather than the external starter used on the #3 car. Progress on the construction of this car can be followed on Pierre’s website.

Once completed, Pierre’s engine fired on the first try. Since then, it has been run for over 50 hours at the many shows and demonstrations that Pierre attends with the car. Impressively, there has not been a single failed part in all that time! This is a record of reliability that the real race car would probably envy. It all works too—ignition key, lights, clutch, gearbox, suspension, radiator, brakes, and so on. 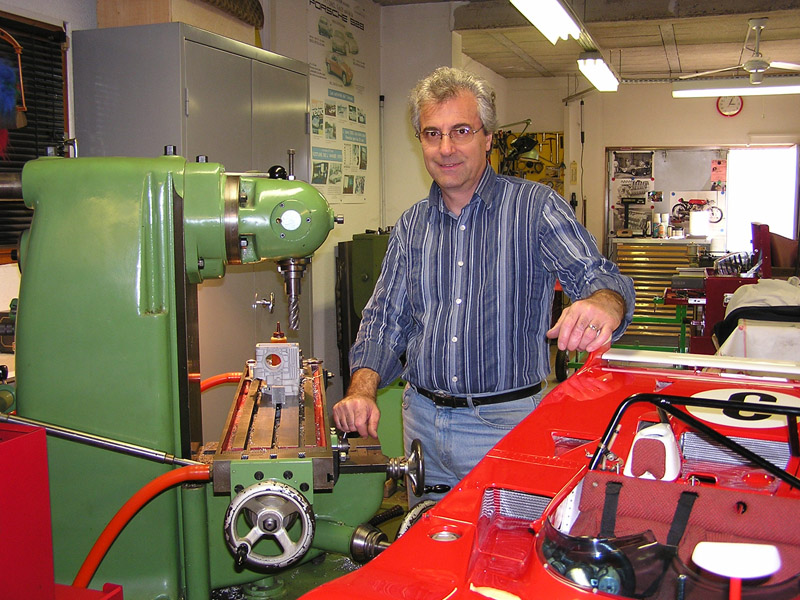 Pierre stands with the Ferrari in his compact but well-equipped shop.

What’s Next for Pierre and His Models?

Going forward, Pierre has plans to model additional cars. He noted that these include a second 312 PB, which is already underway, and a Ferrari P4, or perhaps a Ford GT. Fifteen years, however, is just too long to take for each future car. At this time, Pierre’s finished Ferrari spends part of the year in Avignon, France with Pierre. Then the model spends another part of the year in the United States, residing with Fine Art Models in Birmingham, MI.

To finance this operation, Pierre is building a larger shop to do restoration on full-size vintage race cars. He also plans to bring on more of a staff to help with production of future projects, speeding up the process and hopefully boosting profits.

In making every part of the small Ferrari, Pierre has become an expert in the processes needed to build a fully-fledged race car from scratch. With the growing popularity of vintage racing, this is a valuable skill to have. In the village where his new shop is located, several other restoration-related businesses are relocating next to Pierre’s property.

These include a leather/interior specialist and a paint shop, forming a one-stop restoration center for full-size race cars. The mayor and many locals are pleased with the prospect of the business, and the prestige this may bring to their area. In addition to working on full-size cars, Pierre will be able to continue with his love of miniature cars as well. 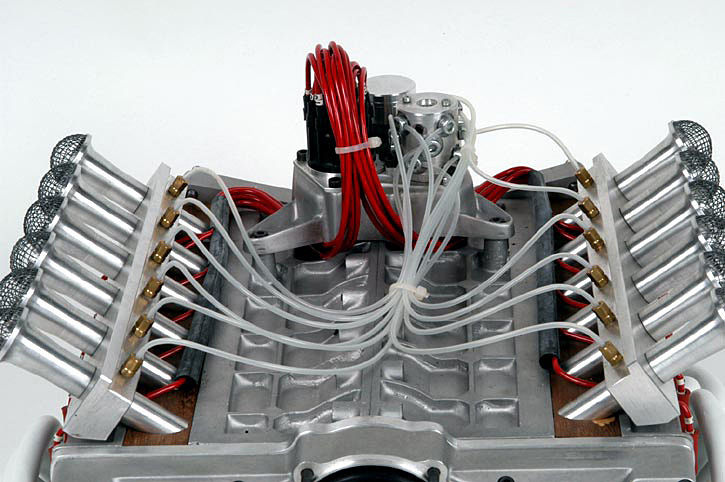 A top view of the Ferrari engine showing the 12 carburetors. 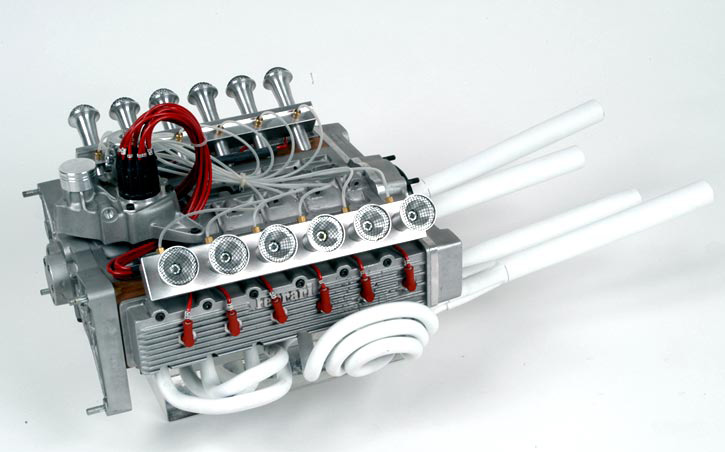 The 1/3 scale, 12-cylinder Ferrari engine removed from the car.

Pierre and His Ferrari at the NAMES Expo

Model engineers in the United States had a rare chance to view Pierre’s incredible car, and to meet the model maker in person, at the 2007 North American Model Engineering Expo in Toledo, Ohio. Pierre was there to accept his award from the Joe Martin Foundation as Craftsman of the Year for 2007. The show took place at the Seagate Convention Center. Joe Martin was there in person to present the award, along with a check for $2,000.00. During the show, Pierre fired up the Ferrari at least three times a day from Friday through Sunday.

Many viewers got to enjoy the wonderful sound and view the incredible detail of the model. We would like to thank Pierre and his wife for traveling all the way from France for the show. We would also like to thank Gary Kohs, of Fine Art Models in Birmingham, MI for transporting the car to and from the show for display.

More photos from the show can be found in Pierre’s photo section linked at the bottom of this page. 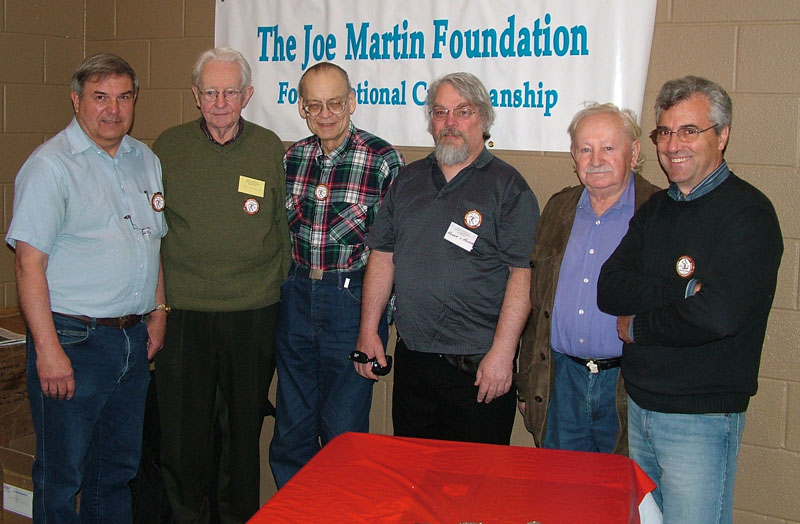 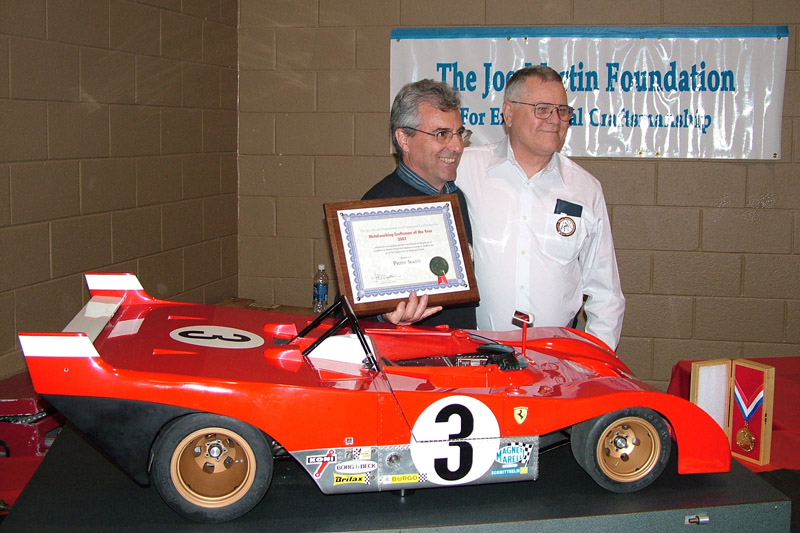 Joe Martin (right) presents Pierre Scerri with his award plaque and medal for winning the 2007 Craftsman of the Year Award. The presentation took place at the 2007 NAMES Expo in Toledo, Ohio. 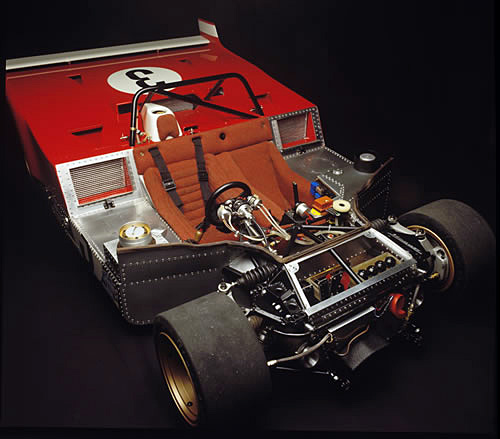 With bodywork removed, some of the finer details of the front suspension can be seen.

Additionally, an article by The New York Times features Pierre Scerri, along with fellow Craftsman of the Year, George Luhrs.