Joe Martin Foundation Craftsman of the Year Award Winner for 2001 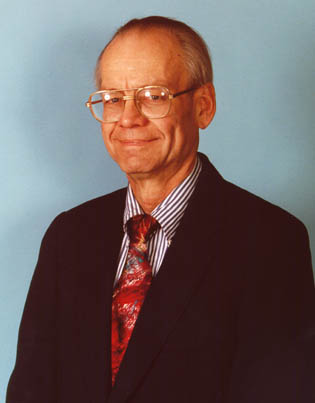 Among George’s credits are wins in the 2000 and 2001 Sherline Machinist’s Challenge contests at the North American Model Engineering Society Expo. Additionally, the Joe Martin Foundation has recognized him as the 2001 Craftsman of the Year. The following biographical information was provided by George Luhrs and his wife, Barbara. We regret to announce that George passed away on February 2, 2014. This page will continue to honor his life and work as the creator of the world’s smallest running ignition internal combustion engines.

George Luhrs built engines of all sizes for most of his life. As a child, he worked on all kinds of models, including free-flight and “U-control” airplanes, model boats, and model cars. George also fixed and rebuilt small engines, and started working on cars as a teen. In order to do these things, he learned how to use a range of tools, including the machine shop equipment needed to make and repair parts.

Later on, George worked his way through school in a machine shop. He would eventually earn a degree in mechanical technology. This prepared him to be many things: a metallurgist, tool and die designer, draftsman, machine tool operator, and mechanical engineer. All of these skills were used by George in both his business and miniature engineering. 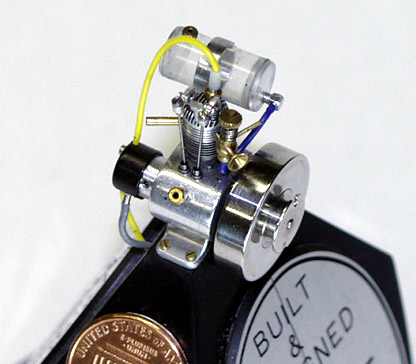 This single-cylinder, spark plug gas engine has a bore of 1/8” and a stroke of 5/32”. It displaces only .0019 cubic inches. George designed and built this tiny engine from scratch in 1996. He noted that it buzzes like a bee when running. Part of a US penny can be seen at the bottom of the photo for scale reference. (Photo courtesy of Thomas Oversluizen.) 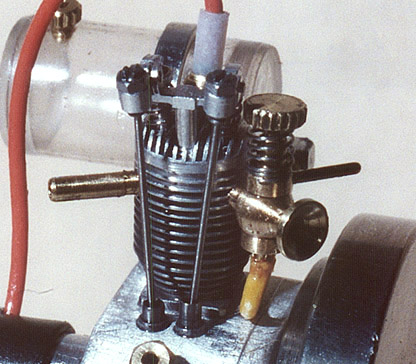 A close-up of the cylinder and carburetor from the same engine. The external pushrods that operate the valves can also be seen. At the time of this writing, nobody had yet to challenge George’s claim that this is the smallest running spark plug fired gas engine ever built. (Photo courtesy of Thomas Oversluizen.)

Shortly after graduation, George decided to set up shop in his own basement. For over 35 years, until his retirement in 1999, George was self-employed in the machine shop industry. Starting out, he mainly manufactured parts for aerospace corporations. Then he did developmental research and design work for several private firms. George has also designed and built unique machinery for a few local companies. He considered himself fortunate to have been able to earn his livelihood doing what he enjoyed most.

Over the years, when his shop machines weren’t tied up with work for clients, George would build models of engines. He also made many pieces of miniature equipment, such as a tiny drag saw, washing machine, cement mixer, water pump, grinder, and others. This work was done primarily to show how the engines were used.

George’s hobby equipment consisted of the same full-size industrial machinery that he used for business. He designed and built all of his own specialized tooling to use for the model engines. The various operations included gear cutting, miniature bolt making, and other tasks that required special cutters.

Now, George had several specific goals in mind. One was to build several running gas engines that were smaller and smaller with each new project. Both their physical size and the challenge of getting them to run reliably kept George interested and engaged. Every time he successfully built an engine in one size, he would try to make the next one even smaller. 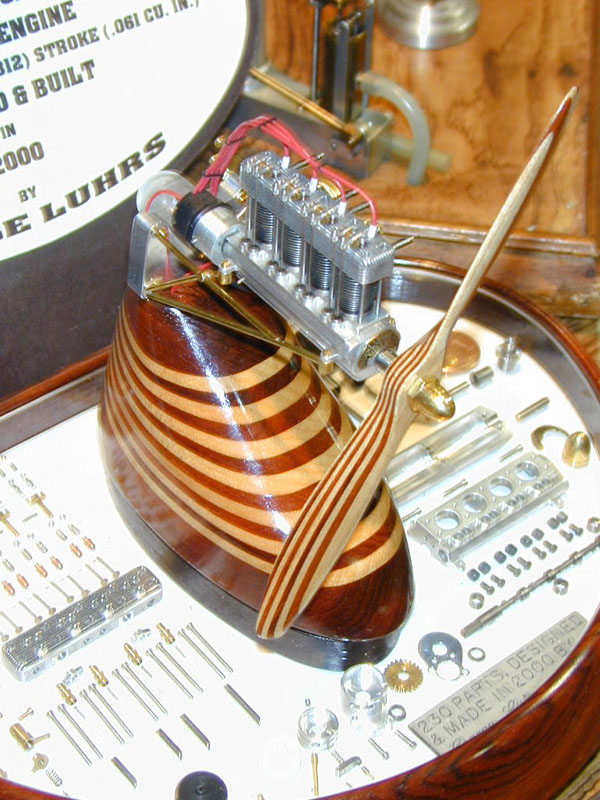 George’s miniature four-cylinder inline aircraft engine won the Sherline Machinist’s Challenge contest in 2000. The engine is displayed on a laminated wooden base, with matching laminated wooden propeller. The display base is mounted to a glass covered case, which houses all the components of a second engine. Viewers can see the 230 individual parts that make up the engine sitting above them. 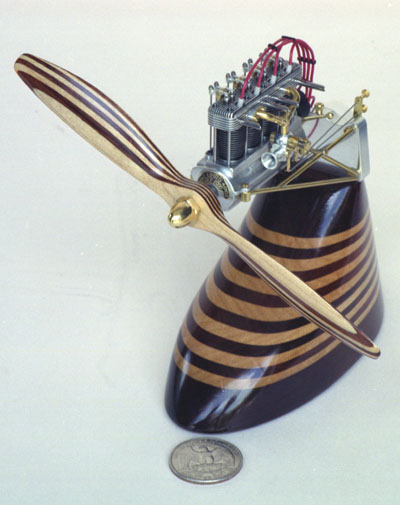 The tiny engine is shown here without the secondary parts displayed. The spark plug fired engine has a 1/4” bore and 5/16” stroke, for a displacement of .061 cubic inches. A quarter sits in front of the engine for scale reference. (Photo courtesy of Thomas Oversluizen.)

At the time of this writing, the smallest engine that George had designed and scratch-built was a 1/8” bore, 5/32” stroke, single-cylinder, four-cycle, overhead valve, spark plug ignition engine. The tiny engine runs, but George continued fine tuning it to function as well the others.

Then, he designed and built a four-cylinder, four-cycle ignition engine from scratch (pictured above), which won first place in the Sherline Machinist’s Challenge contest at the NAMES Expo in 2000. It took over 600 hours for George to design and scratch-build the engine to completion.

For the 2001 contest the following year, George switched to a radial design. He created a 5-cylinder radial aircraft engine with 1/4” bore and stroke, which took first place for the second year in a row. Up until the contest in 2000, all of the engines that George had designed and built were single-cylinder, four-cycle.

George’s goal going into the 2000 contest was to build a small, multi-cylinder, four-cycle engine—and one that could run reliably. The following year he built the 5-cylinder radial engine, expanding his range even further. 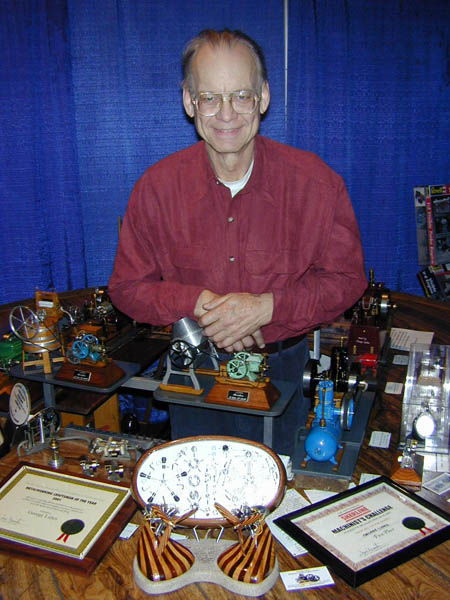 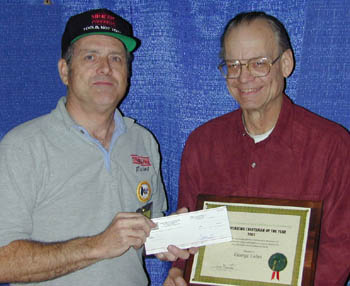 In the first photo, George Luhrs is pictured at his display booth for the 2001 NAMES Expo, showing off some of his engines and awards. In the second photo, George accepts his plaque and check from Joe Martin Foundation representative Craig Libuse (left) for winning the Craftsman of the Year Award in 2001.

All of George’s engines are overhead valve with spark plug ignition. The engines all run using homemade coils for make-and-break ignition. They also have miniature model airplane type coils to fire the spark plugs. These are mounted in battery boxes or in the base of each engine, so as not to distract from the engine itself.

The spark plugs that George made for these engines range in size, from 1/4-32 thread for the large engines, 6-40 thread for the mid-size ones, and 2-64 or 0-80 threads for the smallest engines.

Now, George’s other main goal was to show that there are still people who make things from scratch; that is, no kits and no castings. Most importantly, George wanted to promote model building as a hobby for younger generations, chiefly by passing along as much knowledge as he could.

Toward this last objective, George did a fair amount of work as a guest speaker encouraging interest in the hobby. He spoke at the local grade school, the Boy Scouts, model airplane clubs, and many live steam club meetings. 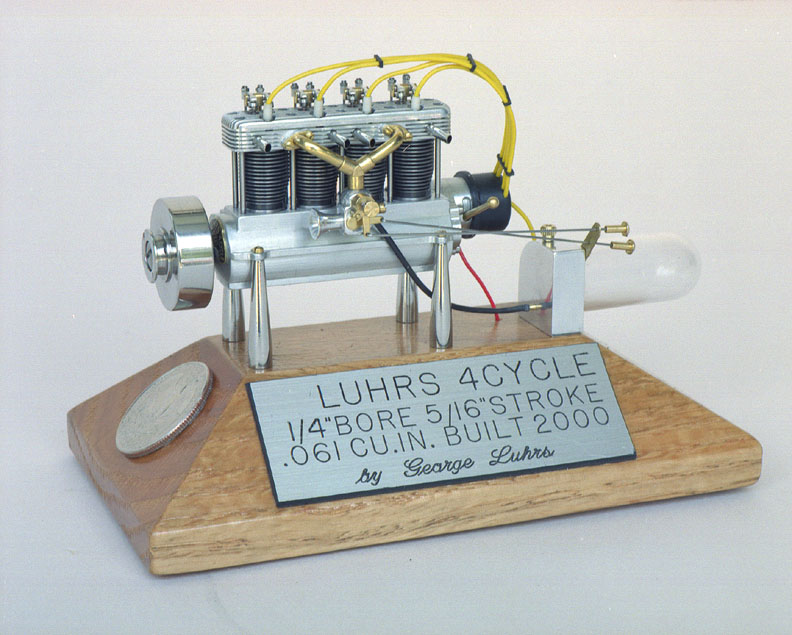 This is a second version of the miniature four-cylinder engine. George built this one to demonstrate that the engine could actually run. Tiny throttle controls extend to the rear where a small fuel tank can also be seen.

Along with public speaking, George also participated in numerous antique car shows every year. He always displayed his engines—along with either a 1930 Pontiac, or a 1960 Maserati. On many occasions, George’s tiny engines generated more interest than the antique cars!

Before his passing, George also spent time tutoring a talented newcomer named Jared Shoenly in the field of model engine building. When they first met, Jared was only ten years old. George noted that even then, the young boy had an incredible understanding of small engines.

For over nine years, Jared spent time visiting George and his wife to learn more about engines, and to gain hands-on experience in the shop. He eagerly absorbed all that George could teach him. At the time of this writing, Jared was an honors student in mechanical engineering at the University of Pittsburgh. Jared would soon be entering his own scratch-built engines at shows and contests, and hopefully taking what George had taught him to new levels. 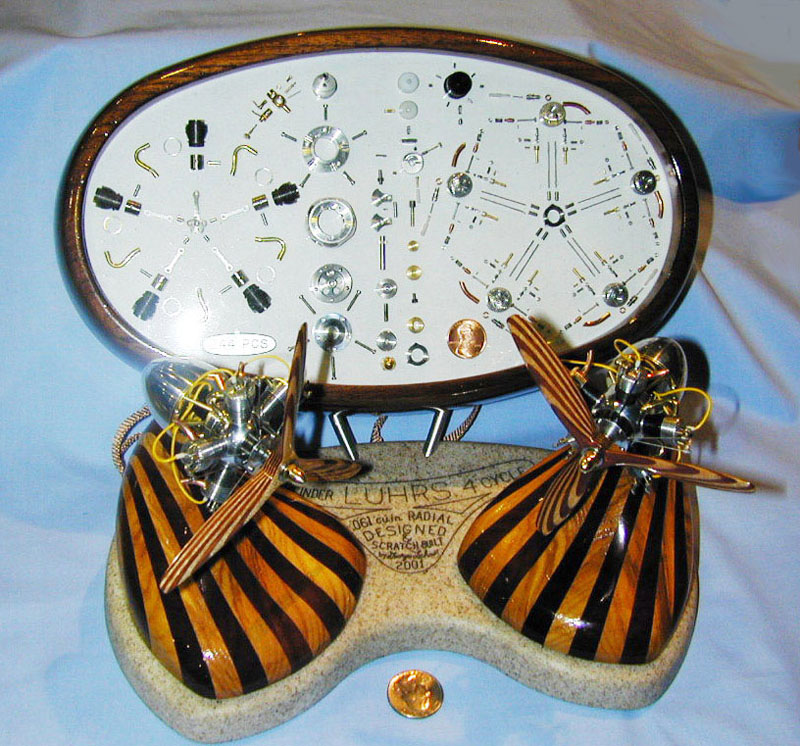 George’s winning entry in the 2001 Sherline Machinist’s Challenge contest—two tiny five-cylinder radial aircraft engines. Additionally, a third engine is broken down to its component parts in the glass covered frame behind them. The running spark plug fired engines have a 1/4” bore and stroke. 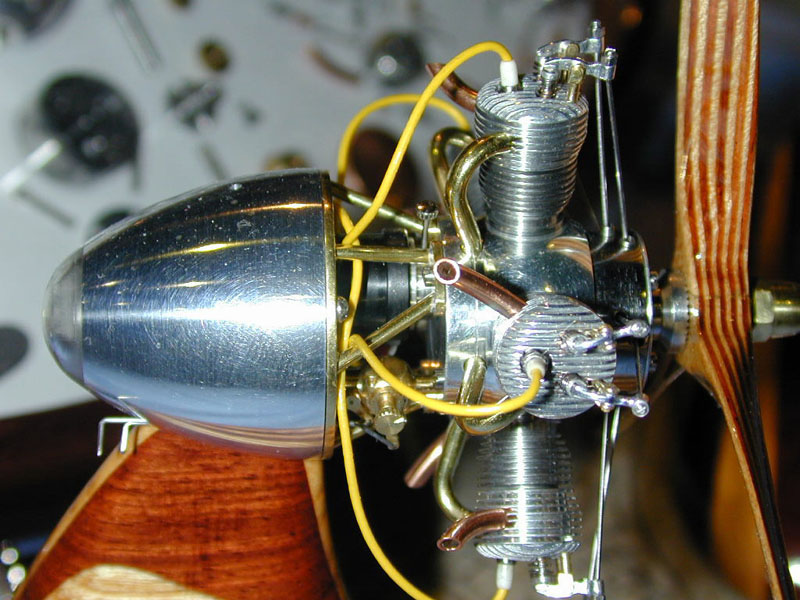 Yellow spark plug leads brighten up this miniature engine. Tiny throttle controls can be seen on the bottom side of the bullet-shaped fuel tank.

Jared’s parents have also worked to encourage the hobby, and have put on the Cabin Fever Exposition in Pennsylvania for over 20 years. The show has drawn many large crowds, and it pleased George to see new people enjoying the challenge of miniature engineering.

Additionally, an article from The New York Times features George Luhrs, along with fellow Craftsman of the Year, Pierre Scerri.