A Retired Machinist With a Love for Miniature Tools

Joe Martin Foundation Craftsman of the Year Award Winner for 1999 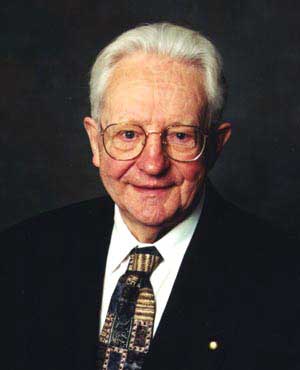 After he retired, Wilhelm “Bill” Huxhold of Ontario, Canada kept the best of his professional machinist equipment. He set up a complete home shop to finally start making his own projects. Bill is a three-time winner of the Sherline Machinist’s Challenge contest, and the 1999 recipient of the Joe Martin Foundation Craftsman of the Year Award.

Born in Germany, Wilhelm Huxhold was always interested in building things. The first time he saw a lathe in school, Bill knew that he would have to build a model of one. (Although, it would take many years until he completed that project.) Having shown an aptitude for this type of work from an early age, Bill followed in his father’s footsteps as a machinist. He entered an apprenticeship program in 1945 as a machine fitter (similar to a tool and die maker).

After completing his 3-year apprenticeship, Bill went to work at a glass factory. His machinist skills were put to use there keeping production equipment running. At the glass factory, Bill learned to make parts both accurately and quickly. Any broken machine had to be brought back on line swiftly, or production would fall behind.

Then, in 1953, Bill and his wife—along with their new baby—followed his brother in immigrating to Canada. Bill was hoping to find work in his trade. However, speaking very little English, he ended up taking a “temporary” job in construction that would last the next thirteen years.

This miniature drill press vise is just one of many scaled-down machine shop tools from Bill’s collection.

Eventually, Bill was able to secure a job with the Canadian government developing and realigning meteorological instruments. His machinist skills were finally being put to good use. About seven years later, Bill foresaw government cutbacks in the future, and began his own business in the same field. It wasn’t long before the government was his biggest customer. Bill retired in 1994, but kept the best of his shop equipment to outfit his roomy 15’ x 36’ home shop. 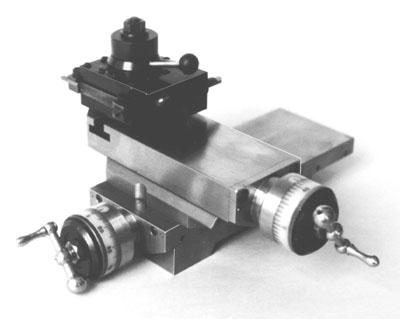 Bill’s first entry in the Sherline Machinist’s Challenge contest for 1996. He made this tiny cross slide and table as a last-minute decision—and mainly for his own enjoyment. It fit within contest size limits, so he entered it. Although it finished as a very respectable second place, that wasn’t good enough for Bill. 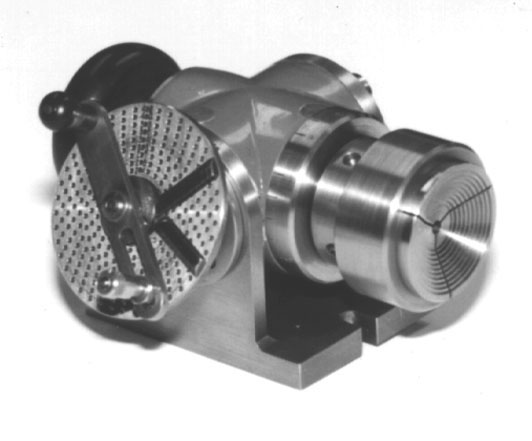 This miniature indexing head was another project that Bill made simply for the love of crafting miniature tools. A trademark of Bill’s work is the perfect finish on each part.

Now, retired is a curious word to use for a man who still spent six to ten hours a day, seven days a week, at work in his shop. However, retirement allowed Bill to work on what he wanted to build, making small and intricate models that he never had time to craft before. His years of work as a machinist gave him the blueprint for taking projects from start to finish.

Interestingly, Bill would start this process by watching TV. Of course, in truth Bill only sat in front of the TV, while his mind worked through each step that might be required for any given model. Every setup and cut was thought out in advance. Although Bill committed very little to paper, he knew exactly what each step would be prior to taking the first cut.

When building his models, Bill avoided relying on trial and error. Years of machining had taught him that such a strategy could get expensive. Even so, in retirement it wasn’t so much about money—but time—that concerned Bill.

Like many hobbyists, there were enough projects on his list to fill several lifetimes. Because of this, Bill tried to make his shop time as productive as possible. Working smaller and in greater detail allowed Bill to take his work to new levels. He noted, “Anything small becomes a challenge. Nowadays, I only do things which are a challenge to me.” 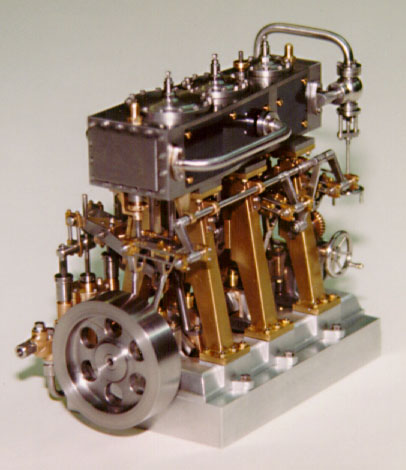 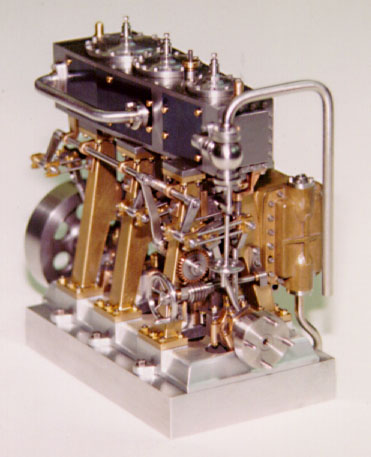 A rear view of the intricate engine.

Advice From a Master Machinist

After visiting the NAMES Expo himself, Bill got the chance to see many more projects from enthusiasts like himself. He picked up a few more tips to add to his wealth of knowledge along the way. However, for those who might think that it takes Bill’s level of experience and well-equipped shop to produce good models, he pointed to the work of Jerry Kieffer.

Jerry was the 1997 recipient of the Craftsman of the Year Award. However, Jerry had no training as a machinist, only eight years experience as a hobbyist, and a full-time job which limited his time. It is desire—not experience or expensive tools—that makes the difference.

The Joe Martin Foundation selected Mr. Wilhelm Huxhold as the winner of the 1999 Craftsman of the Year Award. We hope that Bill’s work will continue to inspire others to “think small.” The range of Bill’s projects on display here can be built with only a few dollars worth of materials, and small but versatile miniature machine tools. All you need is desire! 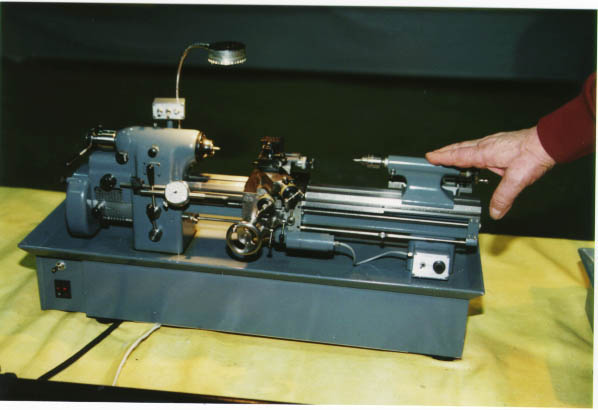 Another one of Bill’s miniature machines—a 1/6 scale Hardinge toolroom lathe. It is correct down to the engraved dials, and fully functional. In fact, the machine looks so authentic that upon returning from one trip to the US, Canadian customs officials did not believe that Bill had made the machine himself. They wanted to charge him import duty for a new machine! Eventually, Bill had to make a serial number tag to show that this was “Huxhold Lathe number 001.”

Finishing in second place in the 1996 Sherline Machinist’s Challenge contest did not sit well with Bill Huxhold. His entry that year had been a last minute decision, but Bill had plenty of time to get ready for the next contest in 1997. Reflecting on that time, Bill said he wanted, “to show that we can do a few things up here [in Canada], too.”

After searching for a project that offered sufficient challenge, he decided on a triple-expansion steam engine, and obtained a set of plans. Bill then scaled down each part by a factor of 2.5, reducing the overall size to fit within the 64 cubic inch maximum limit for the contest.

All told, Bill devoted four months to building the project, and ended up with a museum-quality model. It was certainly worthy of the winning votes awarded by spectators at the NAMES Expo in Wyandotte, Michigan.

In 1998, Bill spent even more time on a scale Corliss steam engine, which also took first place. Finally, Bill made a scale compound Corliss engine for the 1999 Sherline Machinist’s Challenge. It took over seven months to build, and won first place for the third year in a row. At the time of this writing, Bill planned to retire from the contest to free up time for other projects on his long list. 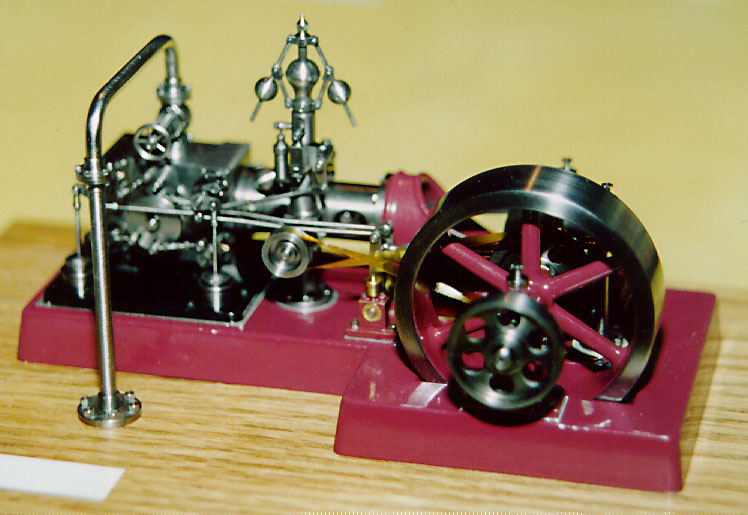 In 1998, Bill followed his triple-expansion engine with this even more detailed Corliss engine, which also took first place. 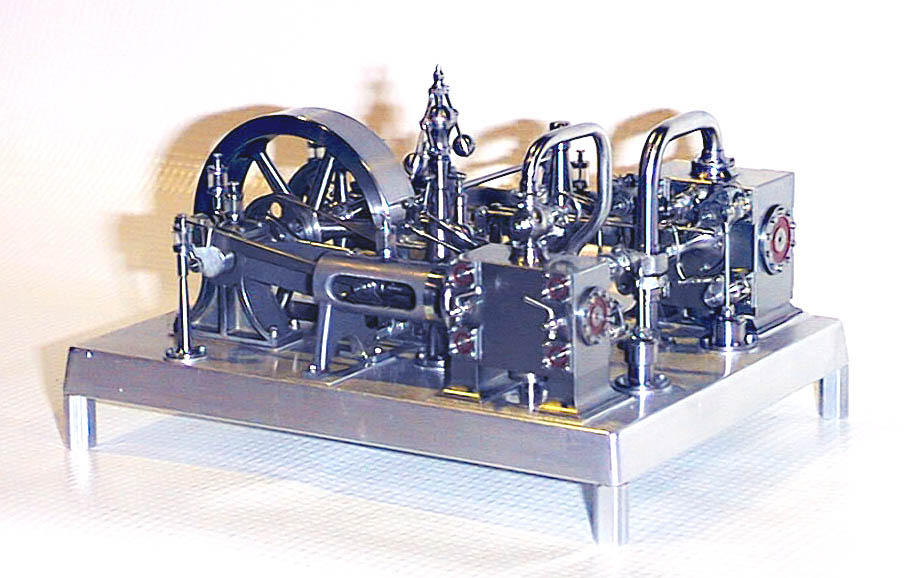 In 1999, Bill won his third straight Sherline Machinist’s Challenge contest with this compound Corlisss, made of stainless steel and Meehanite.