A Family Tradition of Model Making Turns Into a Profession

Joe Martin Foundation Craftsman of the Year Award Winner for 2013 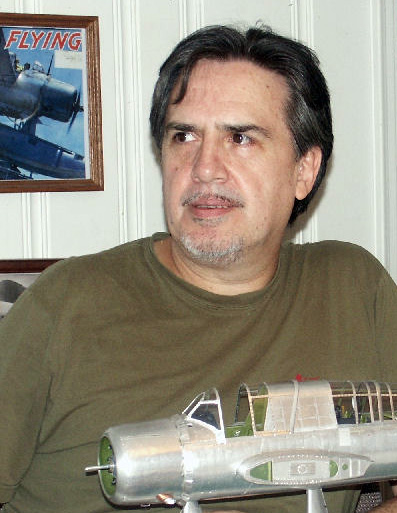 Guillermo Rojas-Bazan has pursued aircraft model building as a lifelong vocation. He started building models at a very young age. Throughout his career, Guillermo has produced a huge range of highly detailed metal models. Many of them now grace museums and private collections around the world.

Shortly after the Joe Martin Foundation publicized the work of aircraft modeler Young C. Park in 2002, several museum visitors asked if we had seen the work of Guillermo Rojas-Bazan. We had not, but a visit to Guillermo’s website left everyone amazed at both the quality and extent of his work. While Mr. Park was a dentist working in his spare time, Guillermo had produced a large body of aircraft models over the years for museums and private collectors. However, when we contacted him, Guillermo said that he was working under contract for a high-end modeling firm, and was not free to promote his own work at that time. He wanted us to wait until he was once again working on his own.

In 2013, that became the case. We took the opportunity to add Guillermo’s remarkable work to the museum’s website, and also to recognize Mr. Rojas-Bazan as the seventeenth winner of the Joe Martin Foundation’s top award. Guillermo was presented with his award for Craftsman of the Year on April 20, 2013, at the North American Model Engineering Society Expo in Wyandotte, MI.

Though some of Guillermo’s earlier models were built in smaller scales, he has built in 1/15 scale for many years. All parts are handmade. The fuselage and wing structures duplicate the original in sheet aluminum.  Details inside the plane that sometimes aren’t even visible once the model is completed are still there—the models are true to their original in practically every way. 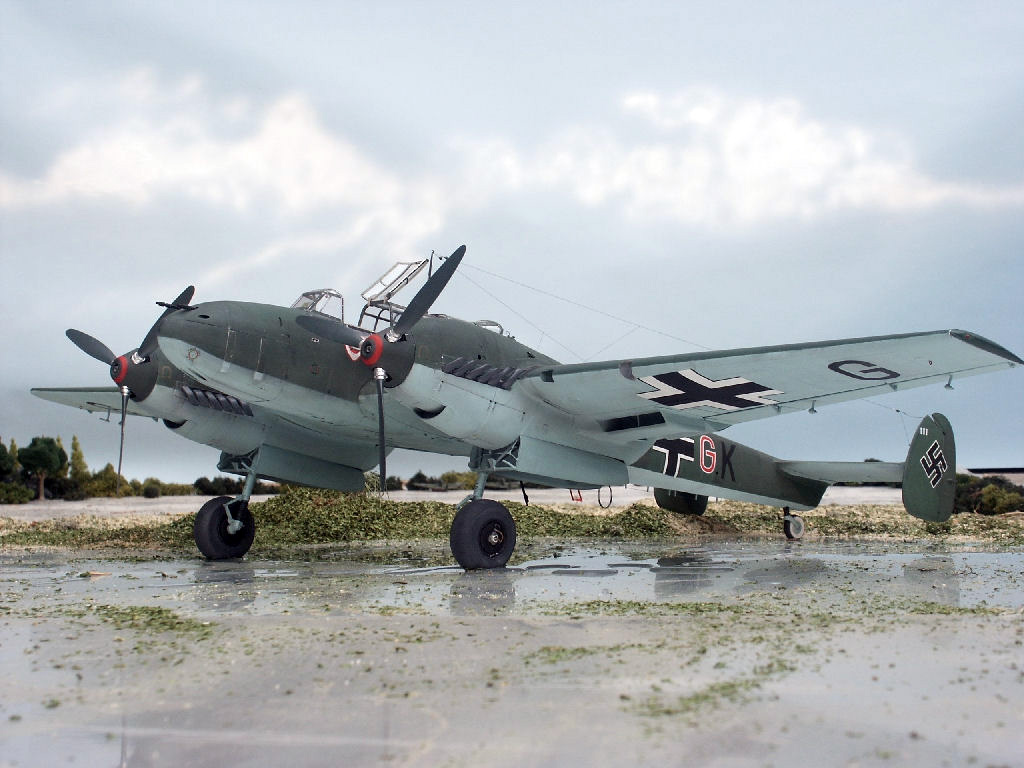 This 1/15 scale German Messerschmitt Bf 110C was built by Guillermo. Shown here posed in a realistic setting, the extreme detail of Rojas-Bazan’s scale aluminum model is on full display.

On top of that, Guillermo also incorporates working features like folding wings, hinged access panels, retractable landing gears, and control surfaces that are activated from the cockpit. He has even made electrically powered propellers and working navigation lights per the client’s wishes. Guillermo uses hand tools almost exclusively, which requires considerable skill given the scope of his projects.

We are most impressed that he’s been able to produce so many models without compromising the quality of his work. The models seem to get better as he demands more of himself, and his already prodigious skills continue to be polished to perfection. Guillermo prefers to create reproductions of propeller aircraft from the period between 1925-1945. 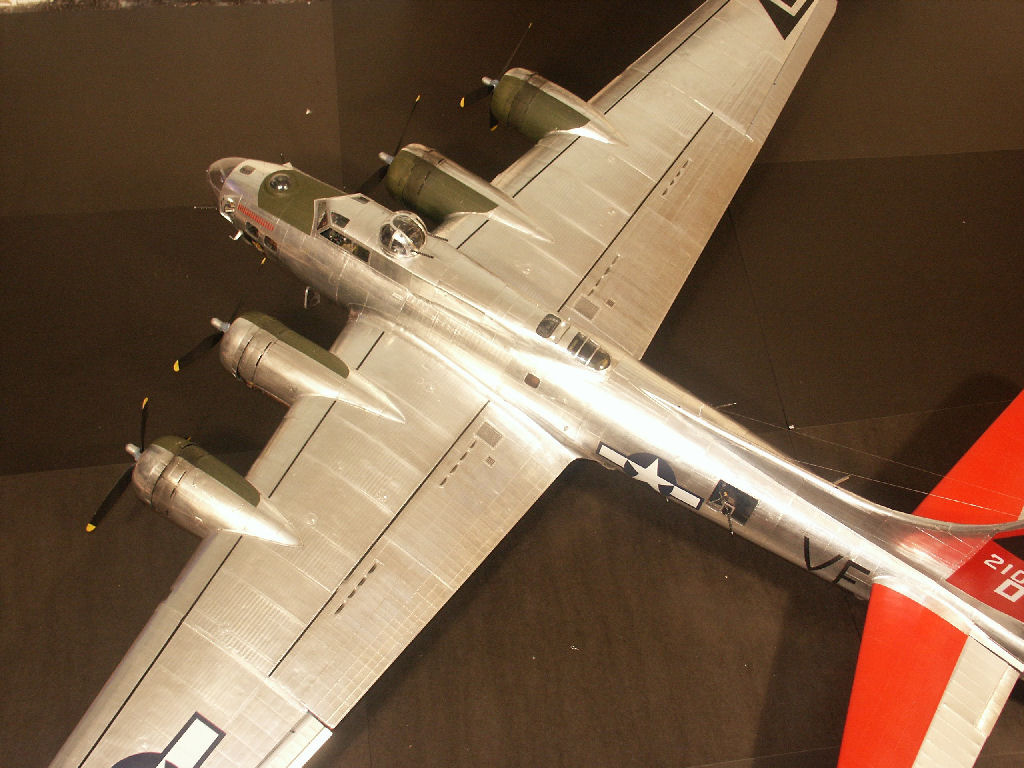 Even at 1/15 scale, Guillermo’s model Boeing B-17 is quite large, with a wingspan stretching over six feet! This project took over 4 years to build. Even the interior of the plane is complete to the smallest detail. 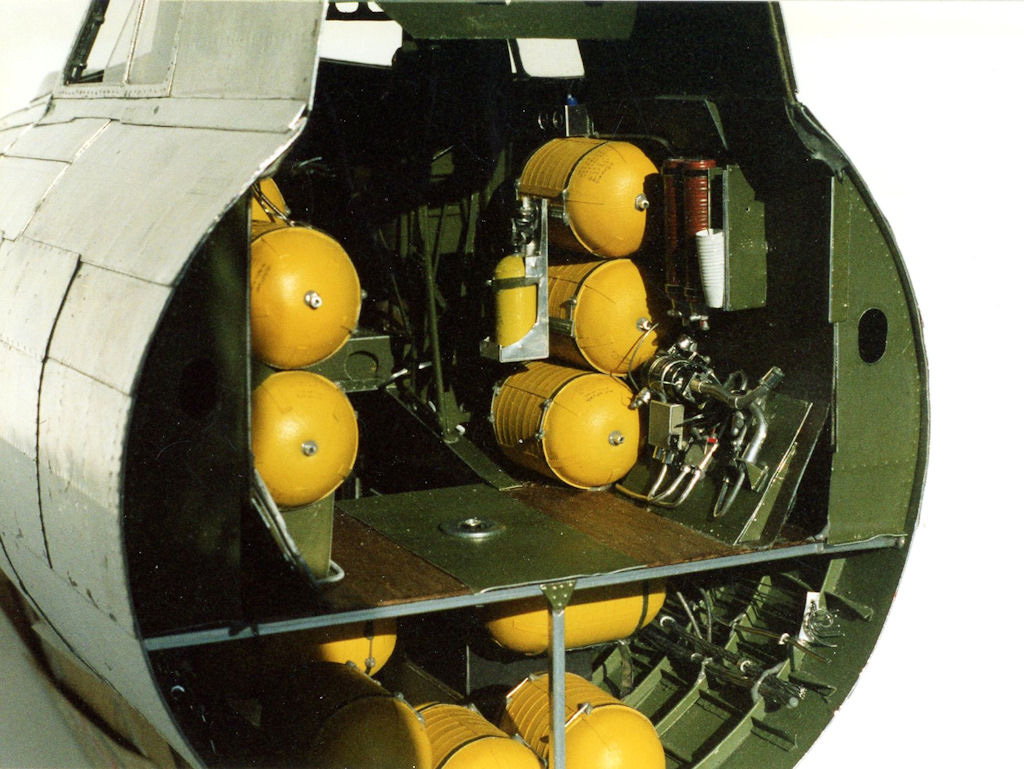 An interior view of Guillermo’s 1/15 scale B-17 Flying Fortress before assembly. Notice the yellow tanks holding oxygen for the crew, and a thermos holder with paper cups.

To be able to make a career out of model making is a rare feat, but it does have a downside. Much like car modeler Gerald Wingrove, Guillermo has not been able to keep any of his models, as they are what puts bread on the family table. To see his work in person, you would have to visit a museum or private collection where they have found a home.

For the next best thing, we can at least present photos of Guillermo’s incredible work here. Guillermo had also planned to bring his partially constructed model of a Japanese Mitsubishi A6M “Zero” fighter to the NAMES Expo, offering a unique opportunity to view his work first-hand.

Before Guillermo Rojas-Bazan was born, his father was already a well-known model aircraft maker in Buenos Aires, Argentina. As noted in newspaper stories of the time, Guillermo’s father built highly detailed tinplate models. However, his father didn’t build them for sale, but rather for the viewing pleasure of family and friends. Guillermo would follow in his father’s footsteps, and started building models from an early age.

Like many young modelers, he started with plastic kits. However, by the age of eight Guillermo wanted to build a model of a Martin B-10 bomber, for which no kit was offered. So he created his own scratch-built model of the bomber from cardboard. As Guillermo grew older, he continued scratch building models in wood and tinplate, eventually graduating to sheet aluminum. He had obviously inherited his father’s skills. 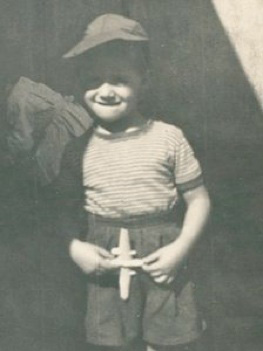 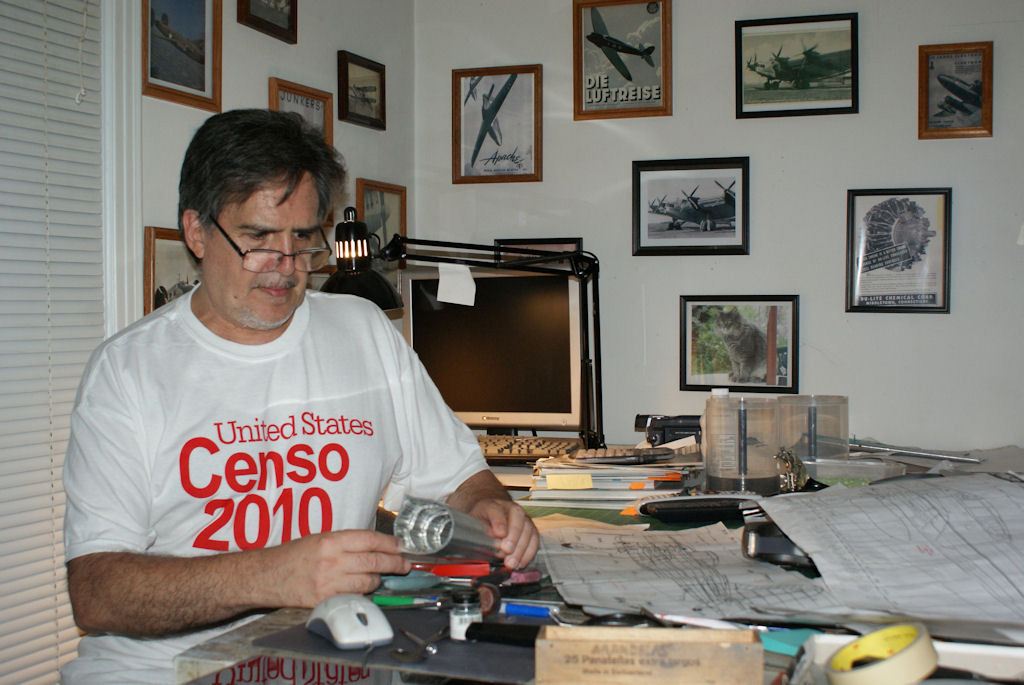 Guillermo at work in his model studio.

In 1981, Guillermo’s hobby led him to a job with the Argentine Air Force and the Instituto Aeronaval (Naval Air Institute). He worked as an aviation illustrator, draftsman, and builder of his unique sheet aluminum scale model aircraft for exhibition in museums—where they remain on display today.

Later, in 1988, Guillermo moved to Spain. There he produced replicas for a London gallery of aviation art, and also built models for serious collectors in both Europe and the US.

In 1990, while working on a commission in Israel for the Israeli Air Force, Guillermo met and married his wife Clarisa. She was employed as a social worker there, and the pair wed in 1993.

The couple eventually moved to the United States in 1994. For 15 years, Guillermo built 1/15 scale models for a company that specialized in super-detailed collector models. After that stint, Guillermo returned to the marketplace on his own as a builder on commission. 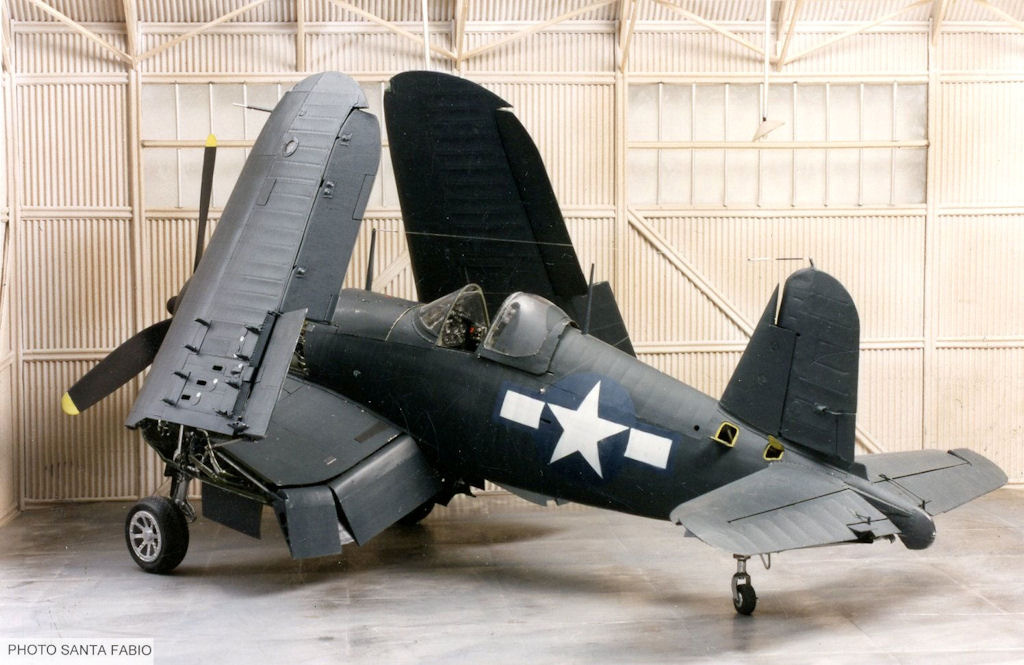 The gull-wing design of the F4U Corsair is one of the more iconic in WWII aircraft design. For carrier duty, the wings had to fold up so more planes could be stored on deck and in the hangar bay. The wing design created an added challenge for the 1/15 scale model. 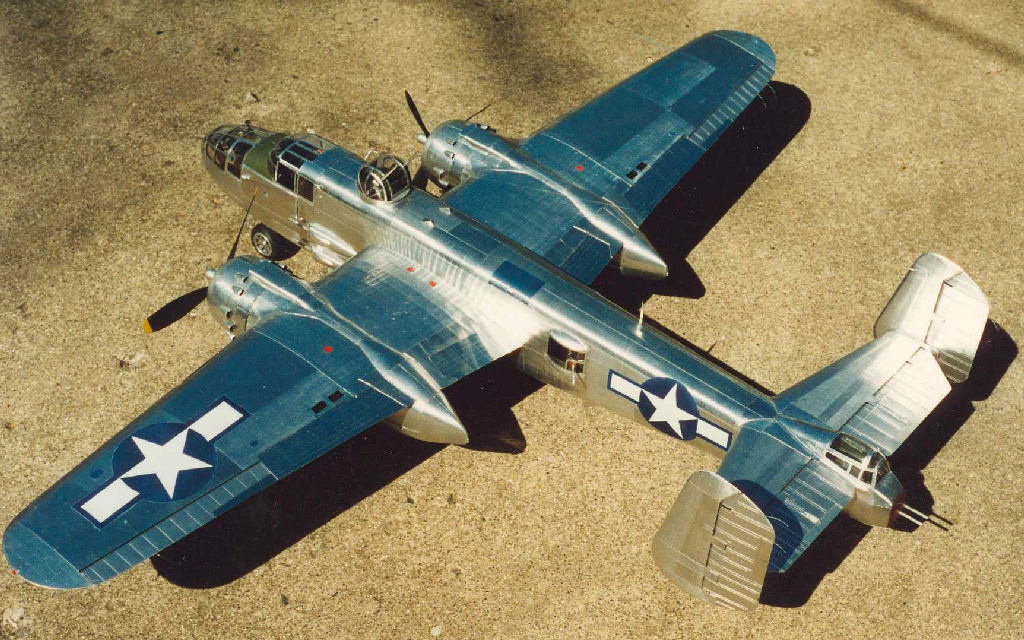 Another sizeable 1/15 scale model built by Guillermo—the North American B-25 Mitchell. Although smaller than the giant B-17, the wingspan of this model still reaches over 42”.

Choice of Scale and Projects

Now, Guillermo notes that building in the larger 1/15 scale takes much longer than working in the smaller 1/24 scale—which is what he started out with many years before. This limits how many models he can build, and also drives up their price, which limits his market. For example, Guillermo’s 1/15 scale B-17 model, with a wingspan of over 60”, took four years to build!

There are not many buyers willing to pay a craftsman’s salary for four years on one model. In the future, Guillermo plans to work in both 1/15 and 1/24 scale, maintaining the incredible amount of detail and function even in the smaller models.

Working in both scales allows Guillermo to build more models, and satisfy more clients, while still producing museum-quality work. The smaller models also offer the advantage of easier transport and display, while still capturing the look and feel of the real aircraft.

To date, Guillermo has built well over 200 detailed metal models. As an additional challenge for his latest project, he is also working on producing a DVD to document his methods. This would be a great resource for model makers around the world. 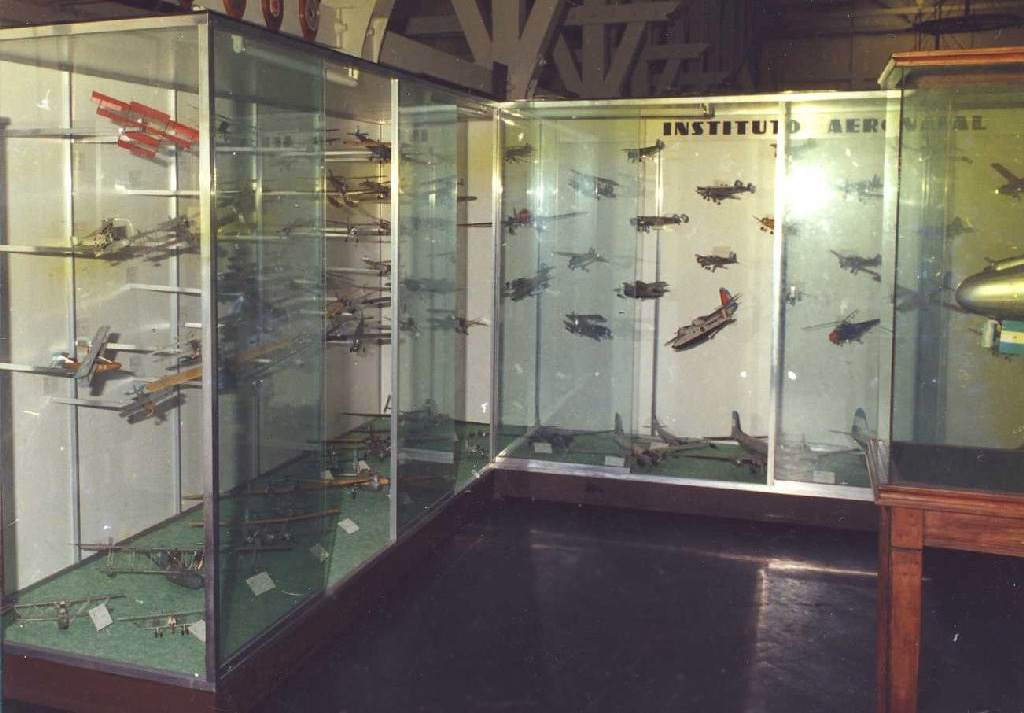 This display case shows just part of the impressive collection of models that Guillermo built for the Naval Air Institute in Argentina. 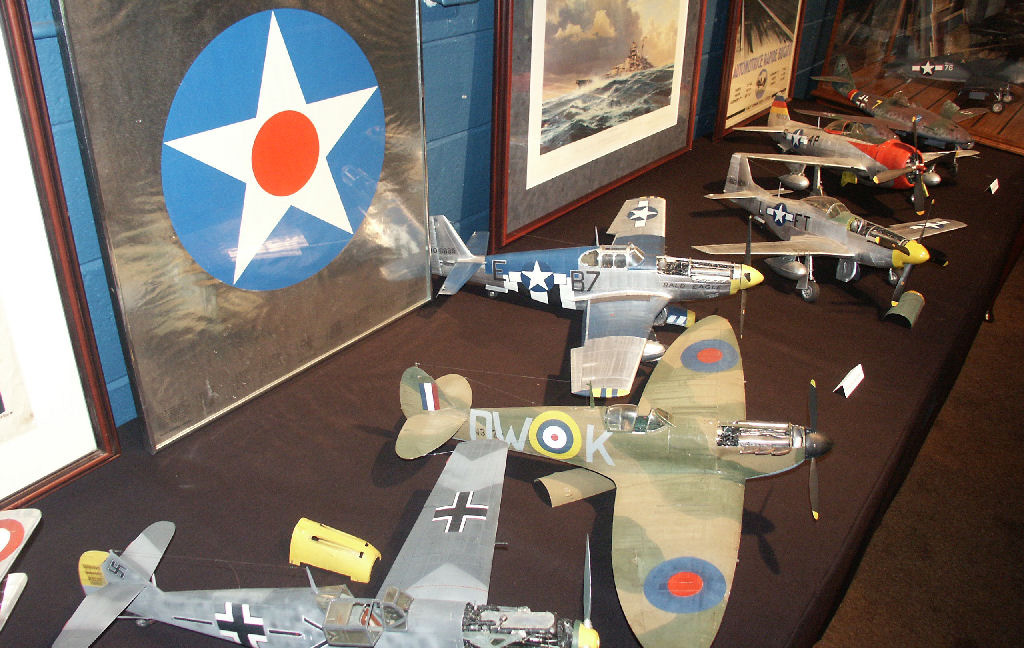 A collection of Guillermo’s 1/15 scale aircraft models on display.

When asked what kind of tools he uses, Guillermo noted, “I do not use electric machines in the construction of my models. I do everything by hand. I know that many people don’t believe me, but this is what I am going to explain and teach in my first commercial DVD tutorial that I hope to have ready this year. The only electric machine that I use is the compressor for my airbrush.”

“I also do not use molds or casting techniques to reproduce objects in series,” Guillermo added. “Everything is made by hand. For example, for my B-17, I built the 10 machine guns one by one, totally by hand. (The same with the engine cylinders, actuators, etc.)”

Mr. Rojas-Bazan also remarked, “I do not have only one favorite model, I have several. Many of them are planes from the period between 1920 and 1939, before WWII (golden age of aviation). These include the Northrop Gamma, Boeing B-15, Boeing YB-17 (prototypes on the great B-17), Martin B-10, Vought Vindicator, Curtiss Hawk III, Junkers G-38, Junkers G-24, Heinkel He70, Fairey Battle, etc. Many of these aircraft were not good machines, or have not been very popular, but I like them aesthetically.” 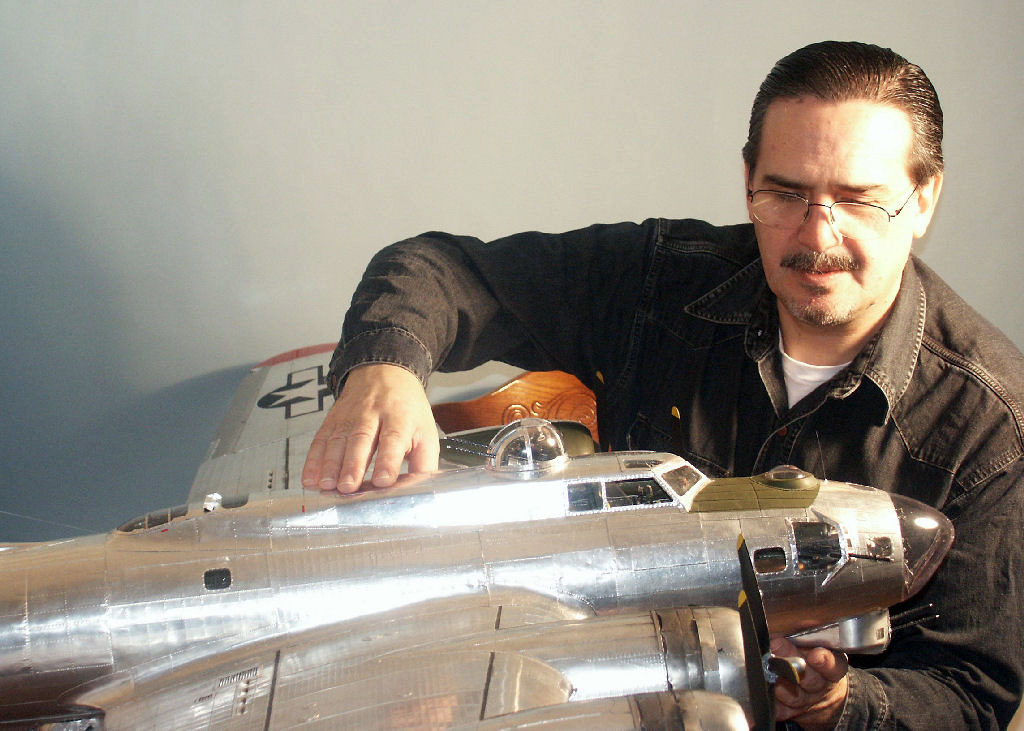 Mr. Rojas-Bazan with his model B-17, lending a sense of scale to this large masterpiece.

Mr. Austin ended up being a collector, and also the US agent for the sale of Rojas-Bazan’s models for years. He also noted, “Like other examples of fine aviation art, Rojas-Bazan’s aviation sculptures help to preserve the history, technology and art of legendary aircraft. He helps to keep memories alive.”

According to author Ann Cooper, writing in an article for Private Pilot magazine in 1994, “One former WWII P-51 pilot and collector remarked, ‘It’s like looking at the real aircraft through the wrong end of a pair of binoculars. The details in this Rojas-Bazan model are the best I’ve ever seen—the lighted and instrumented cockpit, guns and ammo belts in the wings, the fuselage, wing and tail panels, operating controls, navigation and landing lights, the prop, the details in the wheel wells. It’s exactly as I remember the aircraft I flew. This model is incredible.’” 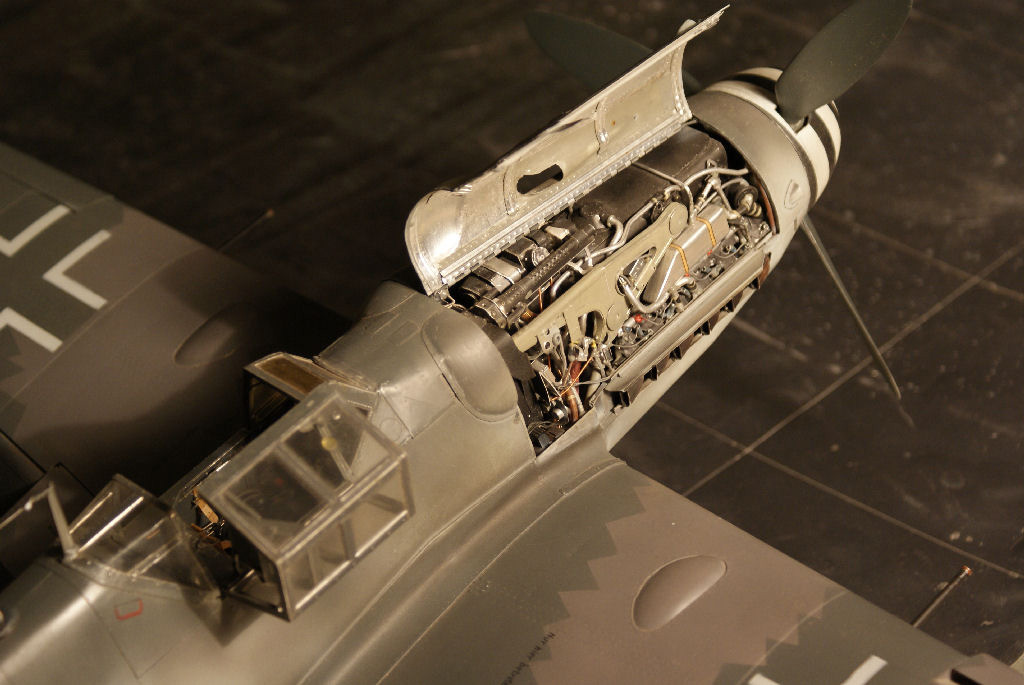 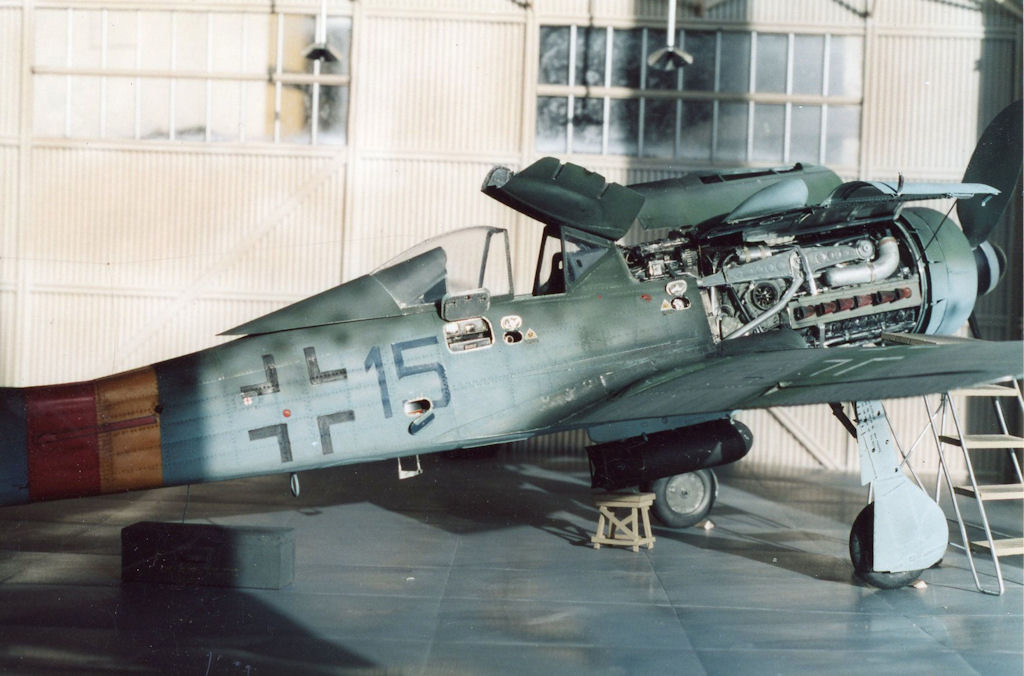 Ms. Cooper also noted, “One aircraft museum curator in Washington D.C. expressed the opinion of many when he said, ‘These models far exceed typical museum quality. Their actual sheet-aluminum construction is the perfect medium. You can’t fake the look of real aluminum any other way. Where was Guillermo when we were asked to make a model for President Bush?’”

In his article about Guillermo’s work, Mike Knepper wrote in Cigar Aficionado magazine (September 1995): “These models are fine art, requiring the same level of skill necessary to create a museum-quality painting or sculpture. Some might scoff that they’re ‘just model airplanes,’ but that’s like saying Mozart’s string quartets played ‘nice tunes.’ We’re talking the Mozart of modeling here.”

Guillermo now lives with his wife, Clarisa, and their son, Roy in Royal Oak, Michigan. 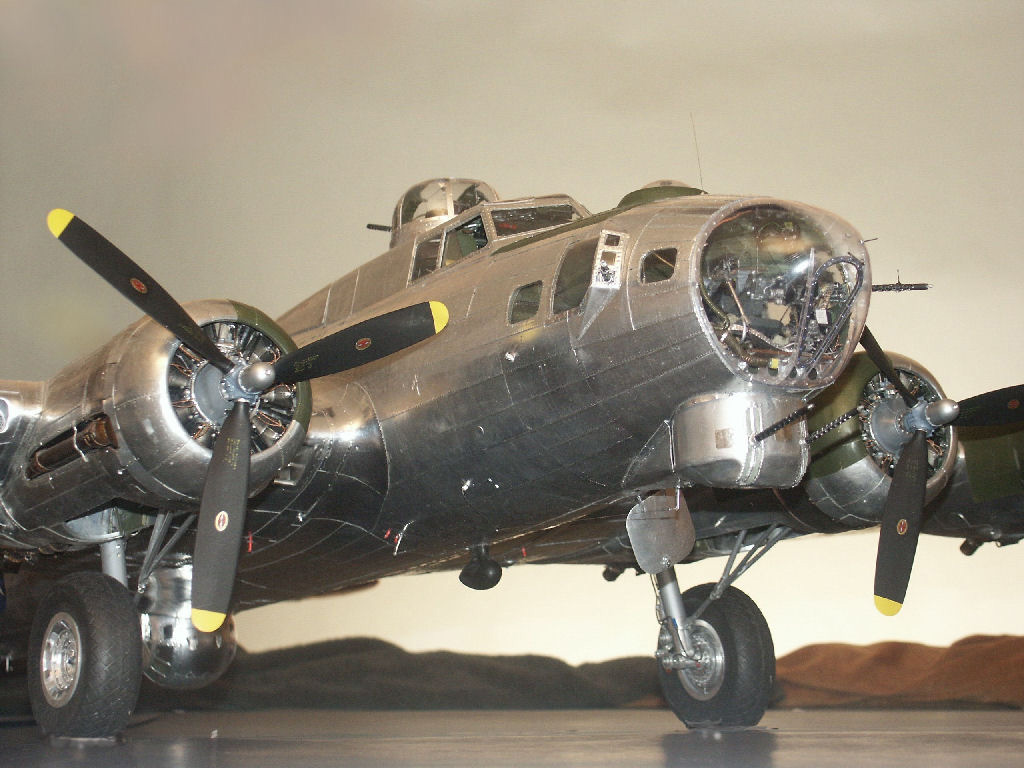 A low angle view of Guillermo’s model B-17 reveals even more detail.

At the time of this writing, Guillermo has just finished building his 1/15 scale Japanese Mitsubishi A6M2 “Zero” fighter from WWII. It took a while, because he is also making the accompanying DVD tutorial that will eventually be available to modelers. The model itself has already been sold, and currently resides in Japan. Guillermo now plans to turn his concentration and skills to models in smaller scales, while also making videos detailing the construction process. 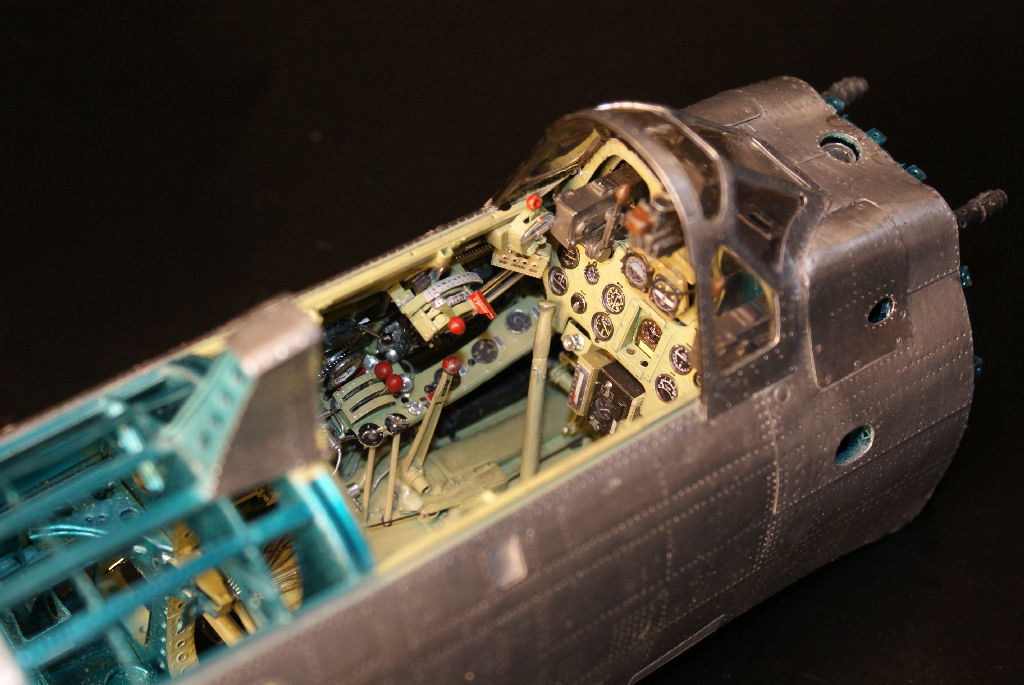 This photo shows the port side of the A6M2 Zero cockpit under construction, with the seat removed to show the floor. 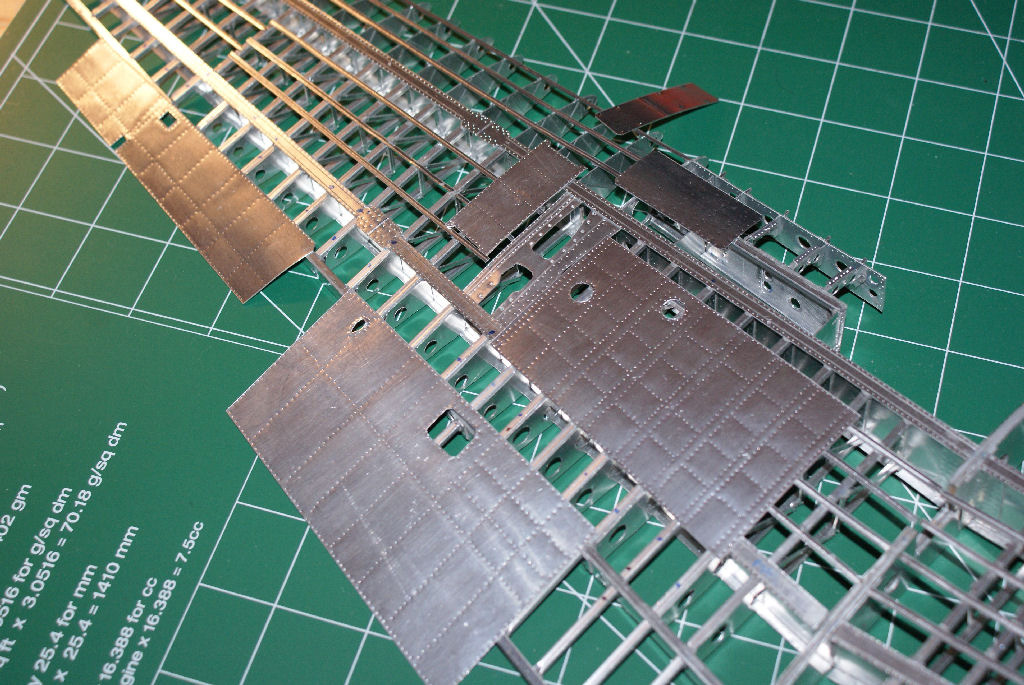 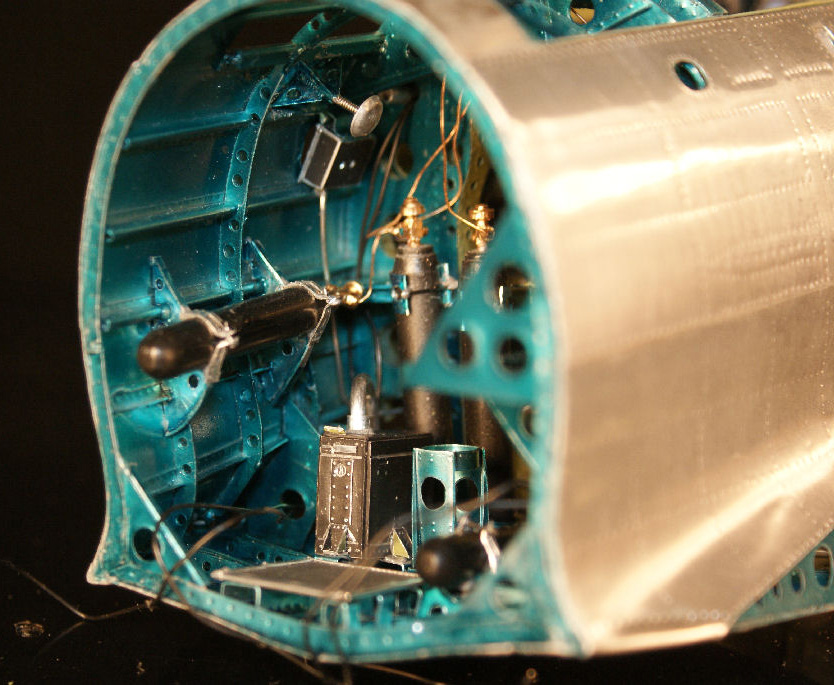 More cockpit and fuselage interior details have been added here. 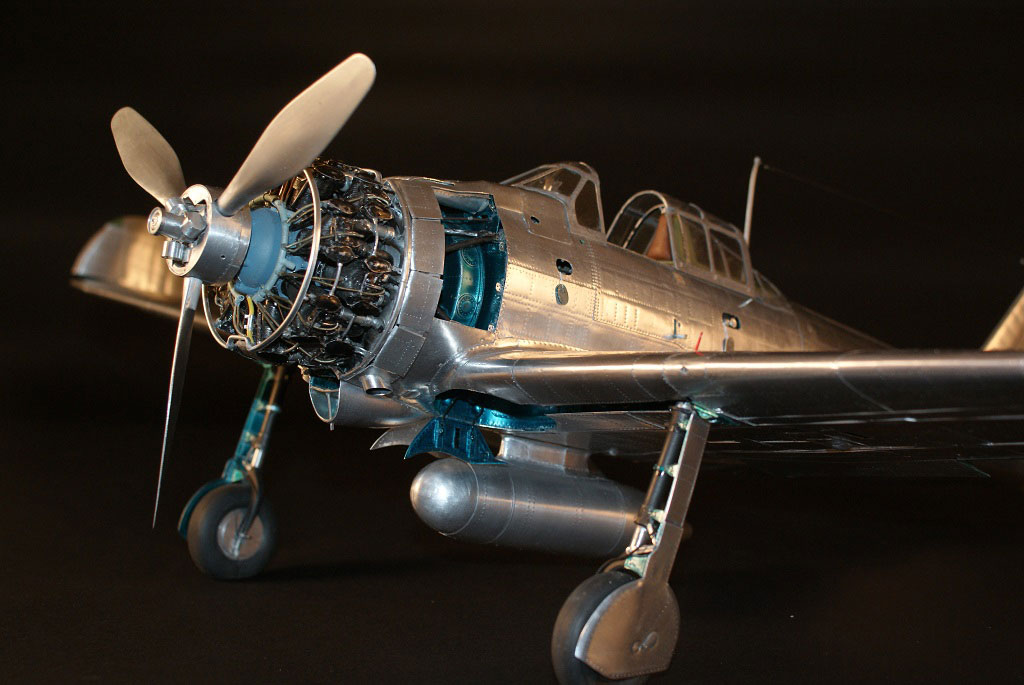 At this point, the plane is nearly completed. This photo shows the Zero with its engine covered removed. 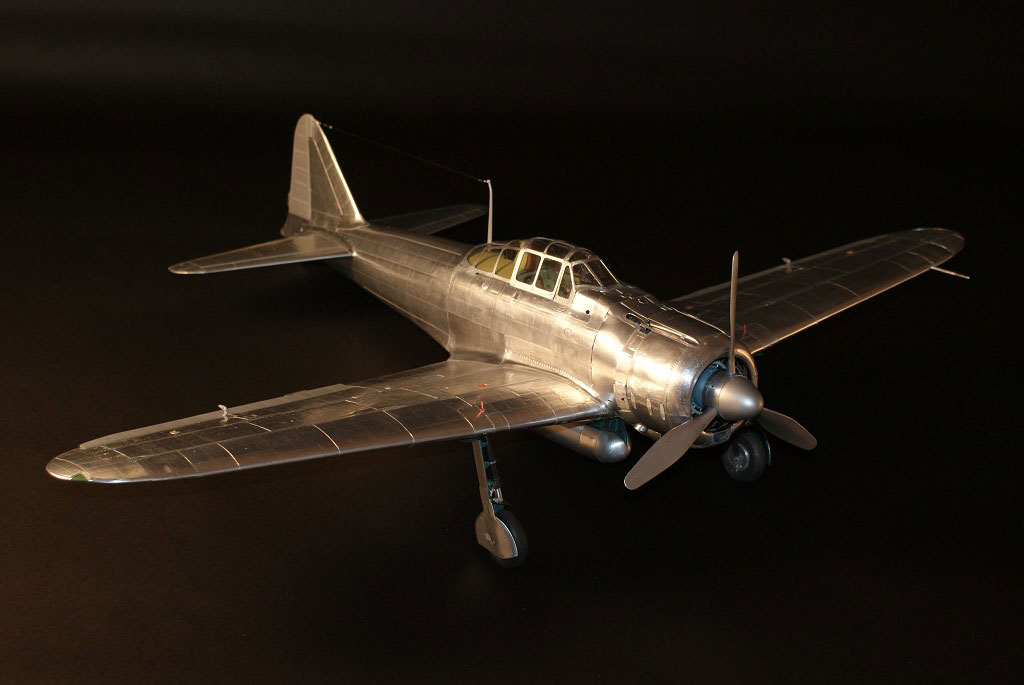 Craftsman of the Year Award Presentation

On April 20, 2013 Guillermo was recognized with the Joe Martin Foundation Craftsman of the Year Award. The award was presented by foundation director Craig Libuse at the 2013 North American Model Engineering Society Expo in Wyandotte, MI. Congratulations to Guillermo on becoming the 17th craftsman to win this award. Five previous award winners were at the show to offer their congratulations as well. 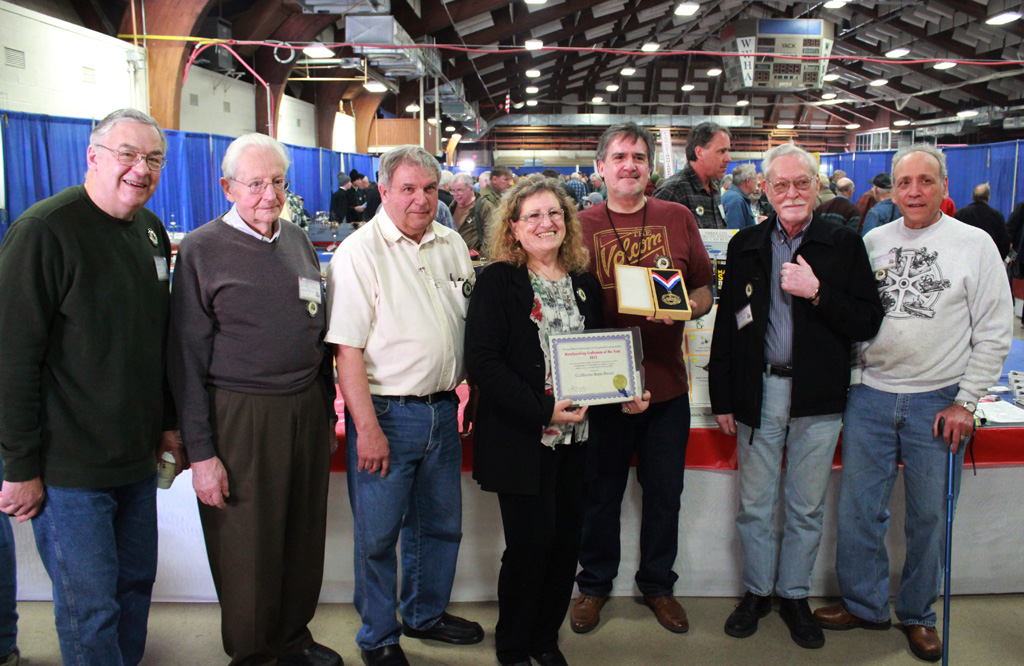 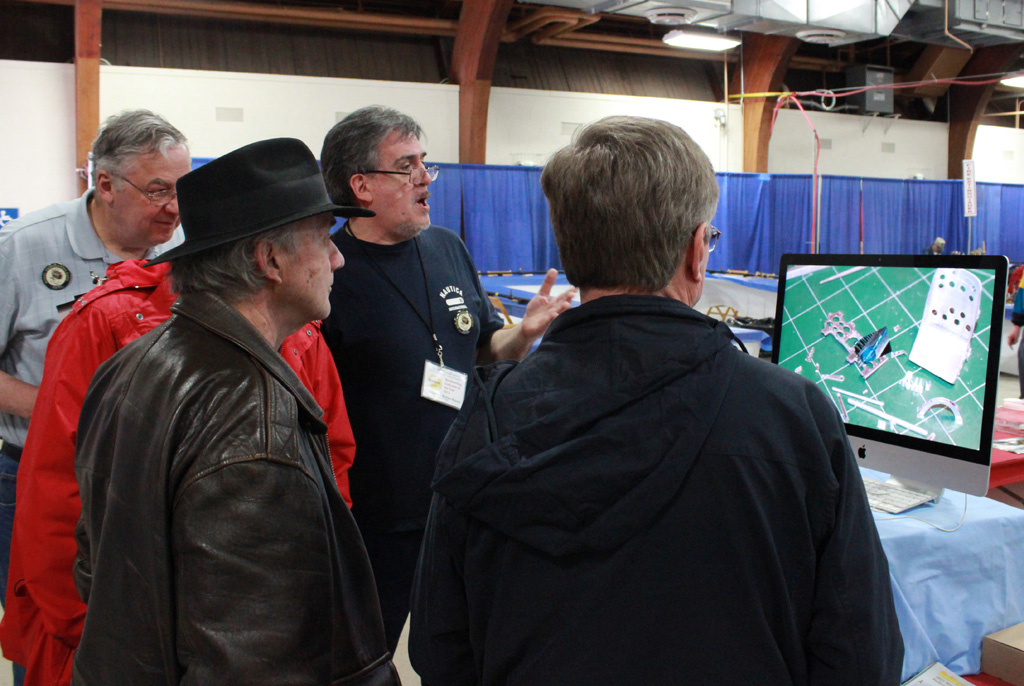 Rich Carlstedt (left) looks on as Guillermo explains his model making process to visitors at the NAMES Expo. 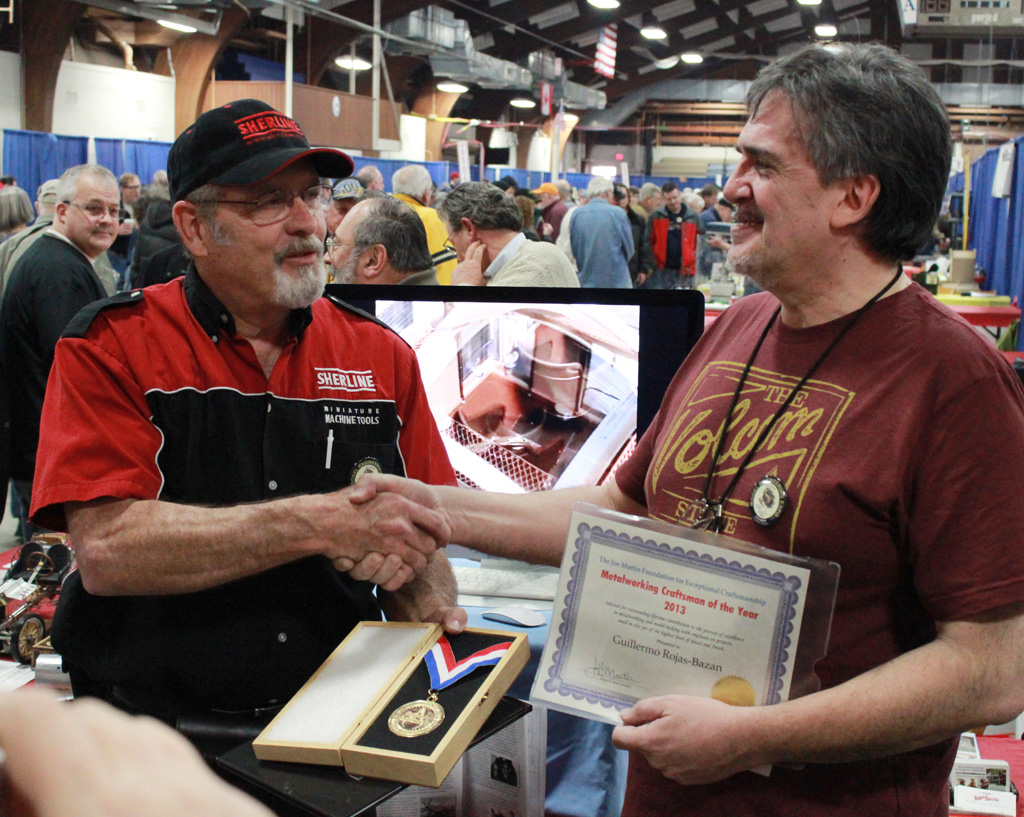 Additionally, Guillermo has provided a vast collection of photos of his work for display on our website.