Joe Martin Foundation Craftsman of the Year Award Winner for 2008 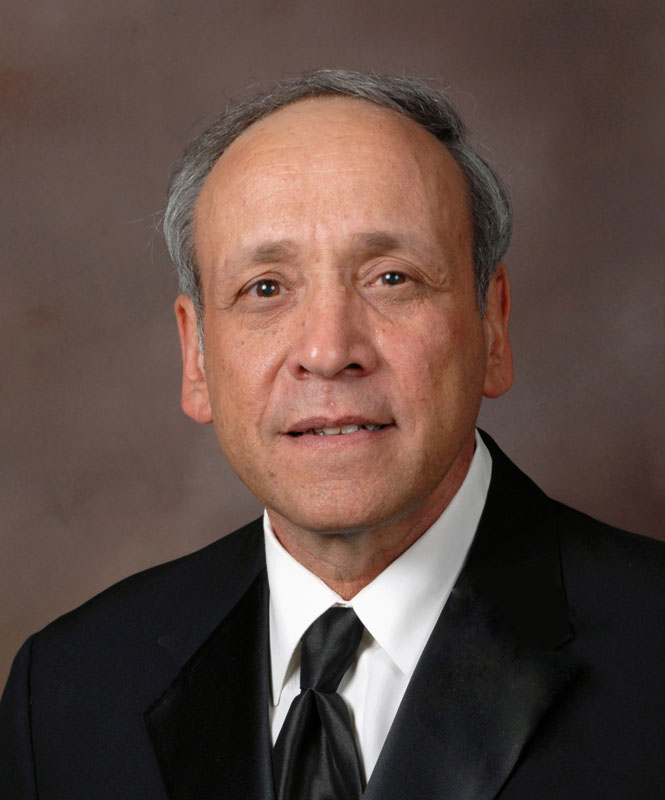 Ron Colonna’s work came to the attention of the Joe Martin Foundation in 2002 through the recommendation of Robert Washburn, former publisher of Strictly I.C. magazine. Ron’s work covers engines in both live steam and gas. He has contributed much to the hobby of model engineering, especially through the book and articles he’s written about his projects.

A Builder With a Knack for Engines From an Early Age

As a child, Ron always enjoyed building things. He would spend most of his time working with his father’s tools while his friends were out playing ball. From an early age, Ron made many of his own toys. On a regular basis he would turn out things like boomerangs, animal traps, model airplanes, go-carts, and more. Not having much money to spend, many of Ron’s projects involved trips to the junkyard, or a perusal of the neighbors’ discarded items.

Model airplanes were a big part of Ron’s early interest in engines. He was always disappointed when his models didn’t turn out like those pictured on the box. Eventually, Ron joined a local model airplane club. After talking with and learning from the pros, his models started to look more presentable. Whenever an engine didn’t perform the way he thought it should, Ron would work it over. He polished ports, swapped parts, and blended fuels until it started easily and ran with increased power.

Eventually, Ron progressed to bigger engines such as those found on lawn mowers, mini-bikes, and go-carts. At one point, Ron and his older brother built a go-cart from old bicycle frames. They straightened some tubing, and put things together according to a set of plans they’d found in Popular Mechanics. A neighbor gave them the engine. He had taken it apart stuffed it in a fruit basket to toss in the trash. Ron rebuilt it instead, and had it running like new in no time.

Now, all of Ron’s courses in high school were college prep, even though he wasn’t sure he ever wanted to attend college. In his last two years, Ron attended a technical school program in electronics. He would go to tech school in the mornings, and then high school in the afternoon. Ron enjoyed the program, and he learned enough to earn some money fixing appliances for the neighbors. Just through word of mouth, that work almost got to be a full-time job.

Once he graduated, Ron took a job in the local steel mill. He worked on the casting floor of the blast furnace for six months. Even though the money was good, it was hot and heavy work, and not exactly what Ron wanted to do. He would soon sign up as an apprentice millwright. This kept Ron in touch with the mechanical side, and he learned how to repair some very complex machines. As an added benefit, the job included a four-year deferment from the military. The Vietnamese War was raging on at the time, and Ron wanted no part of that. However, he finished the program in a little over a year. Ron kept taking and passing all the tests, all while making more money as he came closer to becoming a Journeyman. As soon as he took the final test, however, Ron was considered a course graduate. His draft papers showed up in the mail before his Journeyman’s papers would. 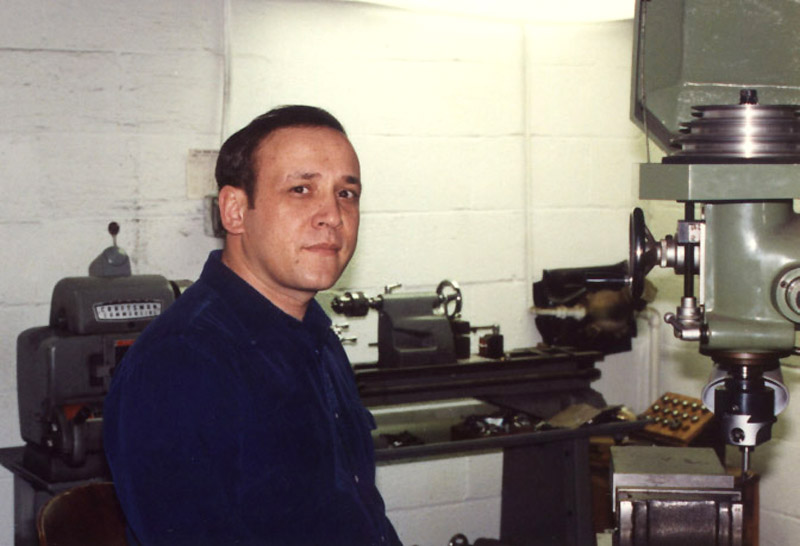 Ron in his shop at the mill. His 12” Craftsman/Atlas lathe is in the background. This shop is quite modest in size, and takes up only one corner of the basement. 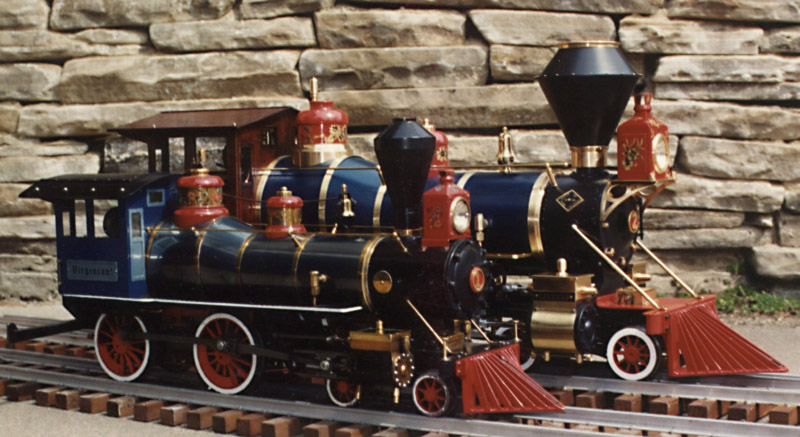 This photo shows the first locomotive Ron ever built, LBSC’s Virginian in 3-1/2″ gauge. The larger version is behind it for comparison.

As a result, Ron was drafted and sent to Vietnam in the spring of 1968. He ended up in an armored unit, and spent a little over a month in combat before being severely wounded by a spinal gunshot. He was retired from the army on a disability pension at the age of 21. Being a partial paraplegic, Ron was eligible for a free education. He attended Penn State University and earned a degree in Mechanical Engineering.

After college, Ron got married and started working part-time for a company owned by his uncle. He helped to design and build pollution control monitoring equipment. Tess-Com produces this type of equipment and sells it to heavy industry companies around the world. While working for his uncle’s company, Ron designed a package using specific ion electrodes that is still being sold today. It was around this time that he acquired a lathe, and began using it to make some small parts for these types of instruments. A milling machine followed shortly afterward.

Since Ron was only working part-time, he found some free time for model building. He was still building model airplanes, but had progressed from U-Control to Radio Controlled planes. With his machining skills improving, Ron thought he would try to build a steam locomotive. He decided to build LBSC’s Virginia in 3-1/2 inch gauge, and joined the West Penn Live Steamers club shortly after completing it. The engine ran extremely well, and Ron had the live steam bug. Shortly after that, he became an associate member at the Pennsylvania Live Steamers

Ron went on to build several other locomotives including: two versions of the Virginia design in 3-1/2 and 4-3/4 inch gauges; a Pacific type locomotive; a Consolidation; and a Hudson—all in 3-1/2 inch gauges. He also built a Case traction engine in 2-inch scale, and a model of an amusement park locomotive in 1-inch scale for Crown Metal Products. 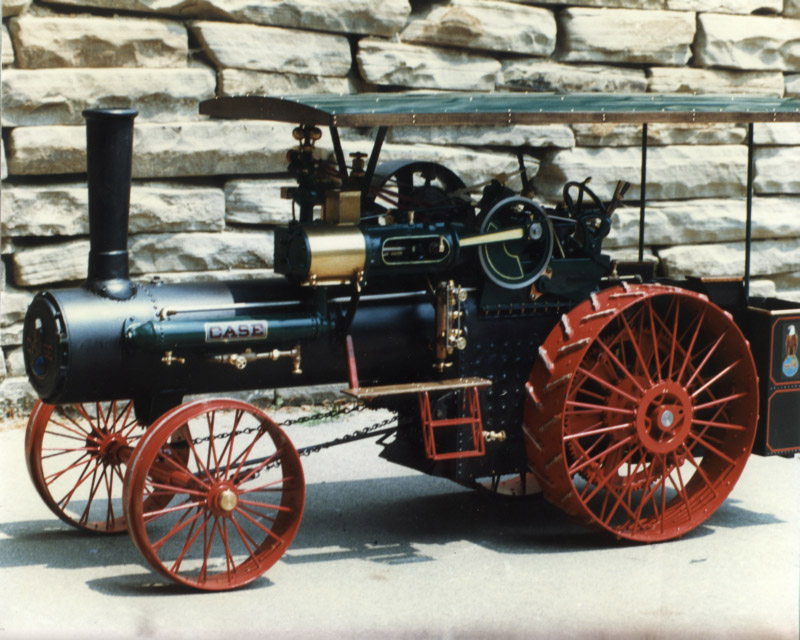 It took Ron two years to complete this 2″ scale Case traction engine. He ran it at several steam shows, but it mostly worked in the backyard.

As a change of pace, Ron started building internal combustion engines. He became acquainted with Robert Washburn after reading a construction article in Home Shop Machinist magazine. Ron built Robert’s “Sky Charge” engine, and corresponded with him about some of the finer points of its machining. Robert would later publish Strictly I.C. magazine, and asked if Ron would like to build an engine with an accompanying construction article. Agreeing to this, Ron settled on the quarter scale “Cirrus Mark I,” which was a Merrit Zimmerman design.

For this project, Merrit supplied the castings and drawings while Ron machined the engine, wrote the build instructions, and took photos of the work in progress. After completion, Ron ran the finished engine alongside Merrit’s original at the second annual NAMES (North American Model Engineering Society) Expo in Ann Arbor, Michigan. Ron was happy and relieved when the engine ran well, and his article received good feedback. He would continue to build IC engines, and took them for display at the many model shows he’s attended over the years. He runs them whenever someone asks, and many times when they don’t! 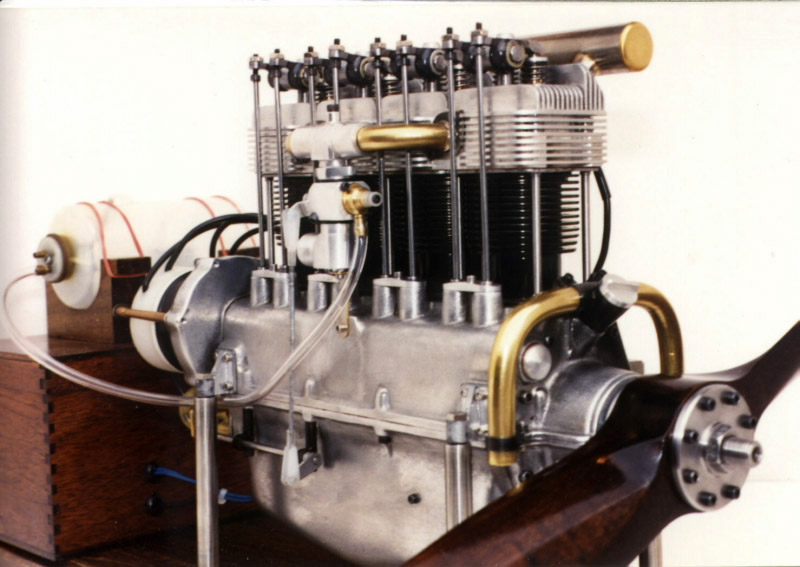 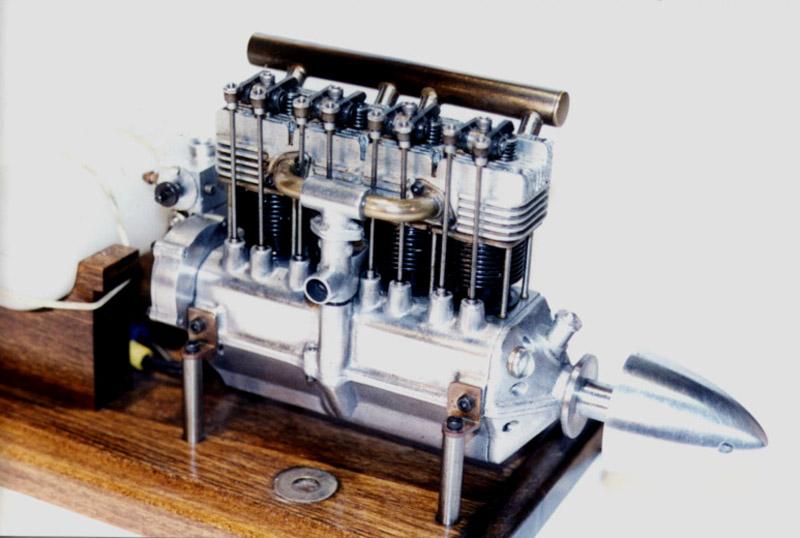 Now, there was one project which Ron considered his most work intensive of all. That project was a quarter scale Offenhauser 270 racing engine. He built the engine from bar stock, produced all the drawings with CAD, and wrote a book of instructions to show others how to do it. Ron had heard about the powerful and famous Offy’s while growing up, but his interest peaked after his oldest son gifted him a book about them.

Ron was able to pick up a couple of side view drawings, and looked up some articles that Robert Washburn had referred to him. A few photos from the book, along with those two drawings and descriptive articles, were all Ron had to work from. He’s since met many many model builders who have been interested in the engine and the respective plans. Several people have actually gone on to build the engine following Ron’s instructions, and sent photos of the finished projects to him.

Interestingly, Ron feels an attachment to these engines—even though others have built them. He noted, “It’s a great feeling and a great hobby.” Of the 1500 or so books that Ron sold in past years, he knew of at least 50 engines that had been built from his plans. He’s built a few more engines since then, including a Novi V8, but he didn’t make plans for those.

Ron remarked that most builders need a lot of technical assistance when building the model (Offenhauser), and that takes a lot of time. Ron noted that sometimes people also asked him why he built a part in a particular way, rather than the way that person might have approached it. While it was a satisfying technical exercise to document the build, it required a lot of extra time that could have been spent building his next engine. If you noticed that very few model engineering projects are documented with plans, Ron could probably tell you why. 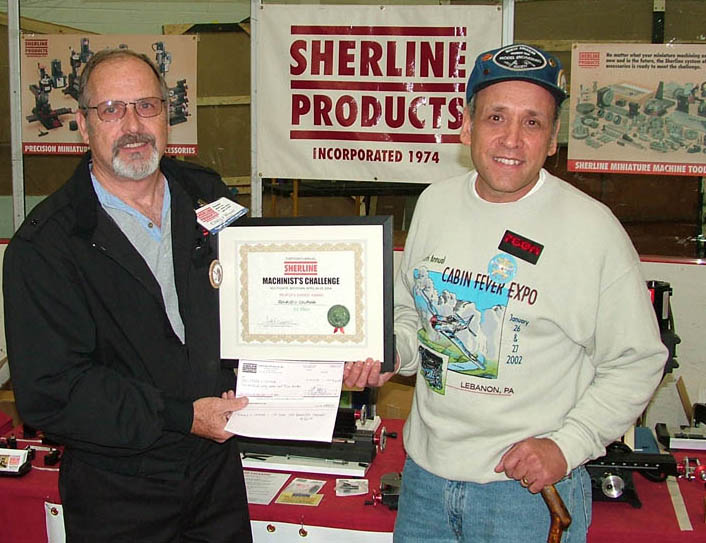 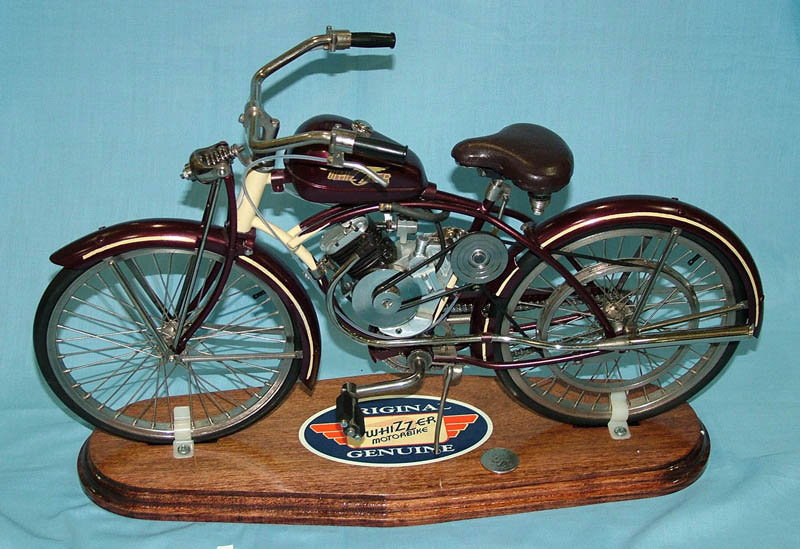 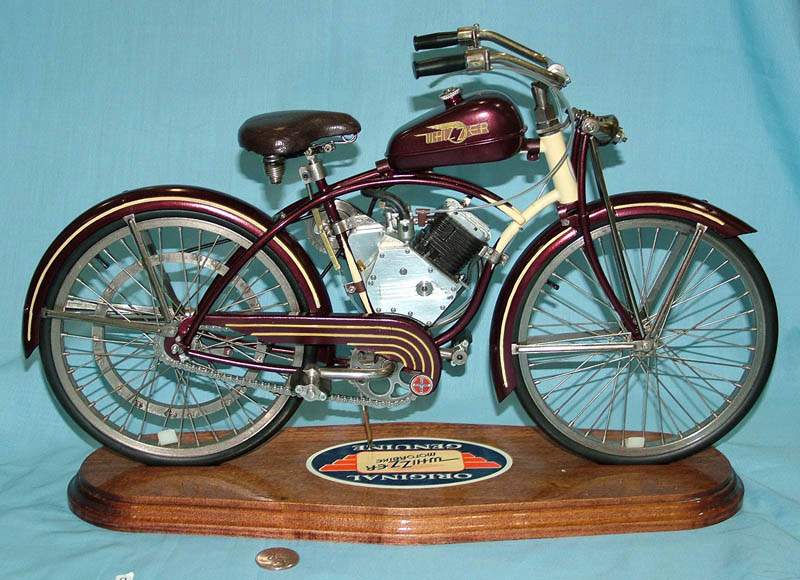 In the lefthand picture, Ron (right) receives his plaque and award check from former Foundation director Craig Libuse at the NAMES Expo in Detroit. Ron won the 2004 Sherline Machinist’s Challenge contest. Ron’s detailed “Whizzer” motorbike (center and right photos) took the top prize in the contest for miniature machining craftsmanship. Awards in the contest are based on votes cast by spectators at the show, who pick their favorites from all entries presented.

In 2008, Ron was selected to be the twelfth person to receive the Foundation’s top award. He was selected because of his extensive contribution to the hobby through his construction of many engines, and also for the additional steps he’s taken to pass on some of that knowledge to others. This includes Ron’s writing of magazine articles, as well as the book he wrote on building an Offenhauser 270 engine. Additionally, his skill in this field is validated not only by how good the engines look, but also the fact that each is a strong, reliable runner. As a past winner of the 2002 Sherline Machinist’s Challenge contest, Ron’s work is also obviously popular with show goers who inspect the projects in person. In recognition, Ron received an award plaque and a check for $2000.00 at the 2008 NAMES Expo. His work was displayed there in a special area set aside for the winner of this award, where he could run his engines and discuss their construction.

Watch some videos of Ron’s engines running on YouTube.

View more photos of Ron’s extensive engine collection, as well as the many other model engineering projects he’s undertaken.