Now, it’s no stretch to say that engraving is what Roger is best known for. Although his skills and interests branch in many other directions, this field is where the core of his talent is best displayed. His work is highly sought after among gun collectors who want the very best engraving on their special pieces. Because of his training as a gunsmith, Roger is not only capable of engraving a new gun, but also restoring and re-engraving old ones. More examples of his work are shown below. Additionally, some of Roger’s other firearm work can be seen on his miniature gun projects page. As a disclaimer, all engraved designs shown below are copyrighted by Roger Ronnie, and may not be copied or reproduced in any form without written permission. 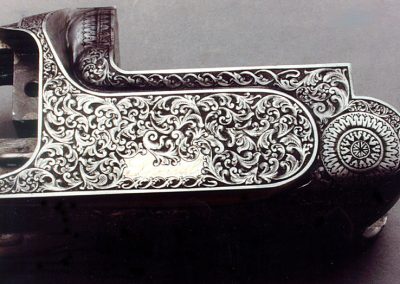 This over/under shotgun by Perazzi is engraved with an intertwining early American style scroll. Note the three dimensional “rope” style of scroll that wraps around from one side of the gun to the other. The word, “Special” is inset here, but difficult to see at this stage of the process. 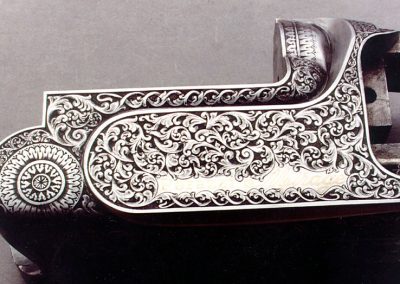 The golden inset words don’t show up well at this point, because the metal is in the “white” stage. Once the gun parts are blued, the gold inlay will stand out better against the darker metal. In this image the words, “Perazzi Mirage” are inset. 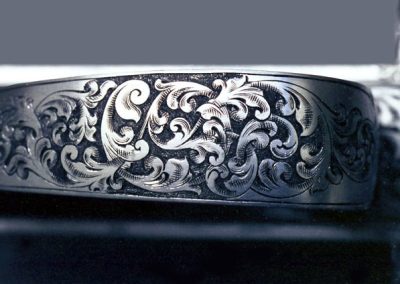 The trigger guard for the Perazzi shotgun. 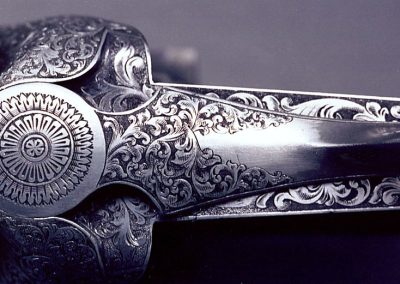 A close-up view of the top of the Perazzi. 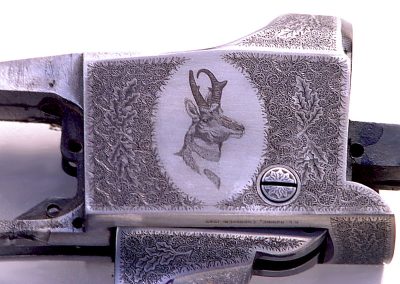 A Ruger No. 1 with antelope engraving surrounded by English style scroll with oak leaves. 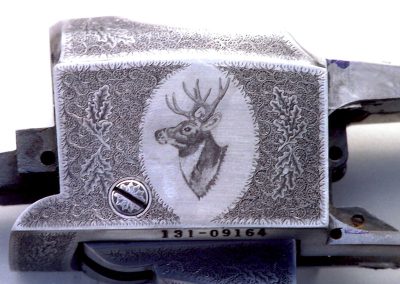 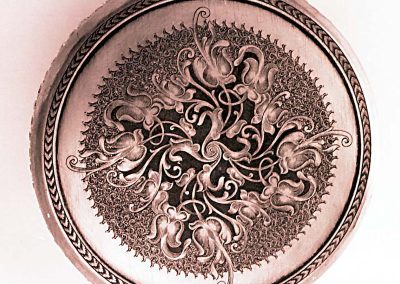 The backside of a Tissot pocket watch engraved by Roger. The small scroll is about 1/16” in diameter. This project took about 125 hours to complete. 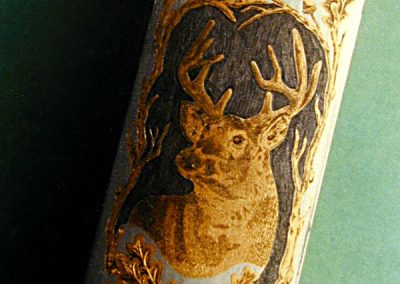 A multi-color engraving of a white-tailed deer adorns this part.

An engraved trigger guard for a Mauser type action. The Grizzly bear marks it’s territory by scratching as high as it can reach on a suitable tree. Just a little higher than this engraved bear can reach are the marks of a larger Grizzly. The bear is turning around wondering where this big fella might be. There is more than meets the eye with some of Roger’s engraving, and these elements of humor and storytelling add even more to the artistry. 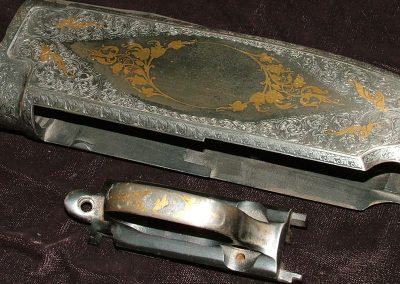 A rifle receiver and trigger guard get Roger’s special treatment. That includes both engraved scrolls and inlaid color, which are intertwined. 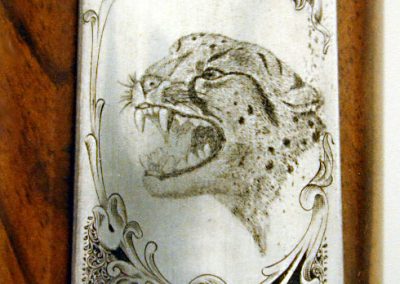 A cheetah floorplate is mounted to a gun.

One of Roger’s most recent engraving projects is for a 1910 Lefever “Thousand Dollar Grade” shotgun. The following photos show a preview of the engraving that will adorn almost every visible part of the shotgun. To see the finished shotgun, visit Roger’s miniature guns page. 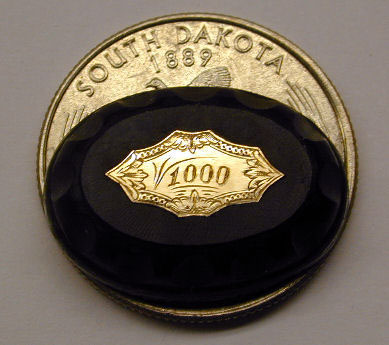 This photo shows the special engraved gold ornament that goes on the shotgun grip cap, sitting on top of a US quarter for scale reference. The ornament identifies the gun as being the rare Thousand Dollar Grade model. Roger had to grind special gravers to do some of this extremely small work. 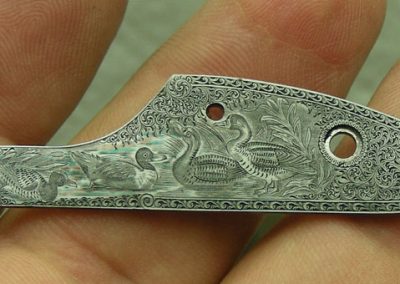 A side plates for the shotgun. While this plate covers less than one square inch in area, it’s richly engraved with ducks and scrollwork. The words, “Lefever Arms Co.” on the left are a mere 0.0145” high. 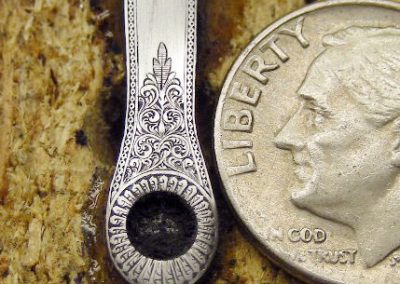 Extremely fine engraving on the top tang is put into scale when placed next to a US dime. 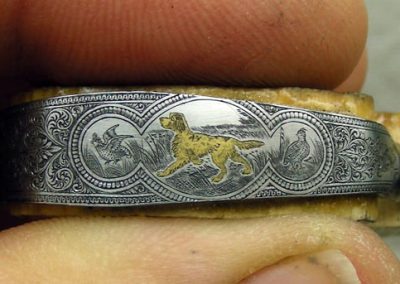 The unfinished trigger guard, with birds and an inlaid gold hunting dog. 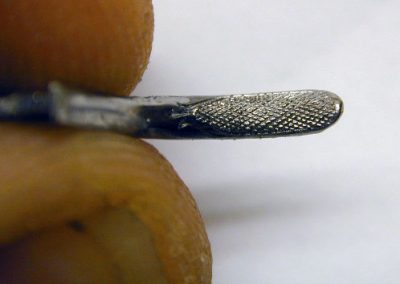 The trigger has very fine checkering.

The following photos show a sample of another one of Roger’s latest projects. This engraving work is for a full-size Ruger #1. It involves both gold inlay work as well as intricate engraving covering almost every surface of the receiver. Roger worked on this project for most of 2013, and submitted these photos in December of that year. 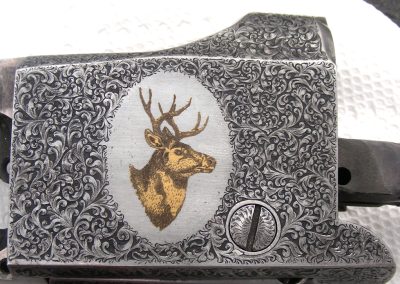 Note the realism of the gold deer head—a specialty of Roger’s. 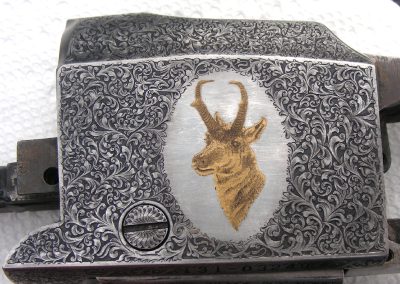 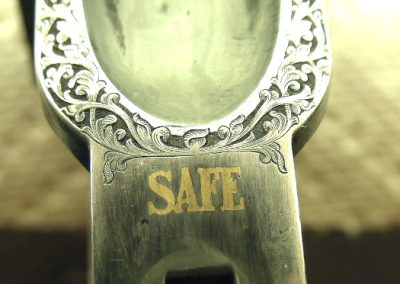 The gold inlay work will show up better after the parts receive their blued finish. 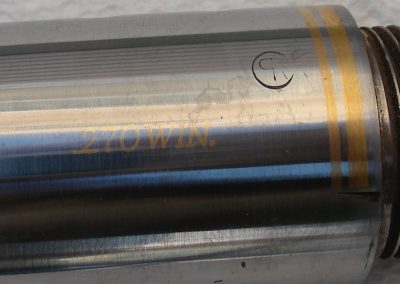 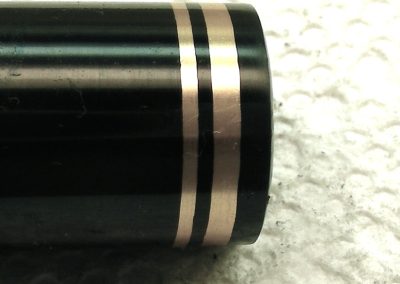 These last photos were taken after the bluing process was completed. 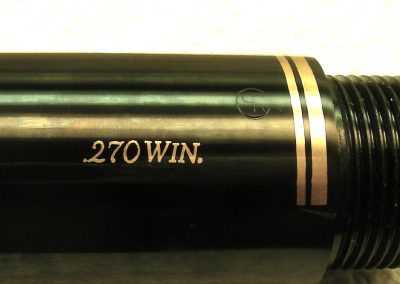 The gold inlay work on the Ruger barrel shows up much better in this stage. 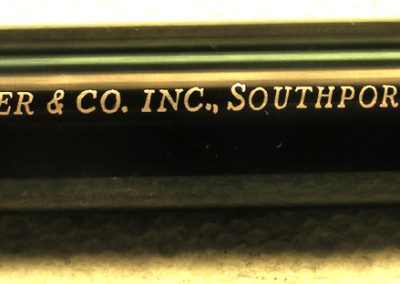 Sherline is proud to confirm that Roger Ronnie uses Sherline tools in the production of some of his small projects.