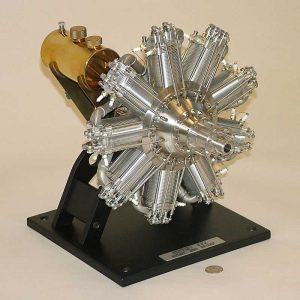 Paul Knapp constructed this model with the help of Lew Blackmore’s book, Bently BR2 and computer aided design (CAD) drawings by Bill Mazak of Arizona. The engine is machined from stainless steel with aluminum cylinders and heads. The engine burns regular gasoline on spark ignition, has a pressurized lubrication system and a carburetor like its full-size counterpart.

Paul built four of these engines—two in stainless steel like this one and two of aluminum.. To see a video of one of the aluminum versions power a model airplane called the Gigantic by Robert Cooper with an 12-foot wingspan on its maiden flight,

see http://www.youtube.com/watch?v=dSYp1jFz6_E. This flight purportedly broke two world records on December 4, 2009—the first flight by a 1/4 scale rotary engine and the first flight by a model of a Bentley BR2. Photos show the engine mounted to the firewall, the Gigantic about to land after its first flight and the people involved: (L to R) Mac Hodges (pilot), Ray Williams, Dale Cavin, Robert Cooper and Paul Knapp.