Honoring Scientific Instruments of the Past While Expanding on Their Possibilities 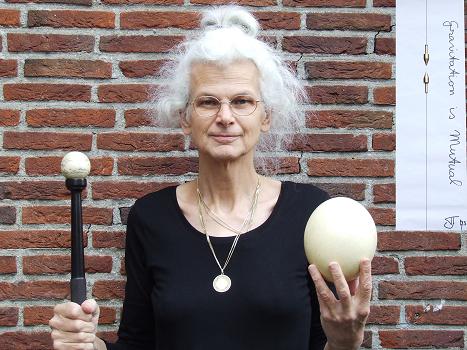 Tatjana Joëlle van Vark, of the Netherlands, has focused her work on subjects that are not typically approached by the ordinary craftsman. When describing her projects, it’s hard to decide where to begin. However varied her creations may be, one thing can be certain—the craftsmanship and attention to detail in each piece is unmistakeable. Most of Tatjana’s creations have complexities that go far beyond surface appearances. The superb craftsmanship is almost a necessity because of the intricate nature of these objects.

In fact, Tatjana’s masterful craftsmanship is evidenced by the mere fact that these projects function properly, because their mechanisms could never be reproduced by an amateur. Whether or not you are able to achieve a full understanding of the function of each object, you will certainly be able to appreciate their surface beauty. As you gain more understanding of the function, additional layers of beauty are revealed.

Explanations of the objects are relatively brief. The beauty and purpose is for each individual to discover for themselves. To quote Tatjana, “Verbalisations involve personal semantic reactions, yours and mine. Verbalisations tend to exclude reality. Just look, maintaining internal silence, until the meaning of my work becomes clear. Then share my lifelong joy in the mystery of Reality, with its surprises, limitations and instabilities.” 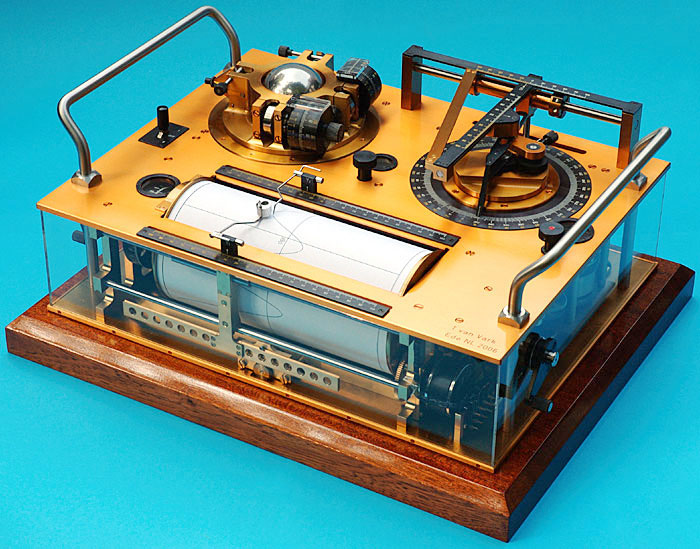 Tatjana’s elaborate Harmonium. (All photos of the Harmonium courtesy of Tim Samshuijzen) 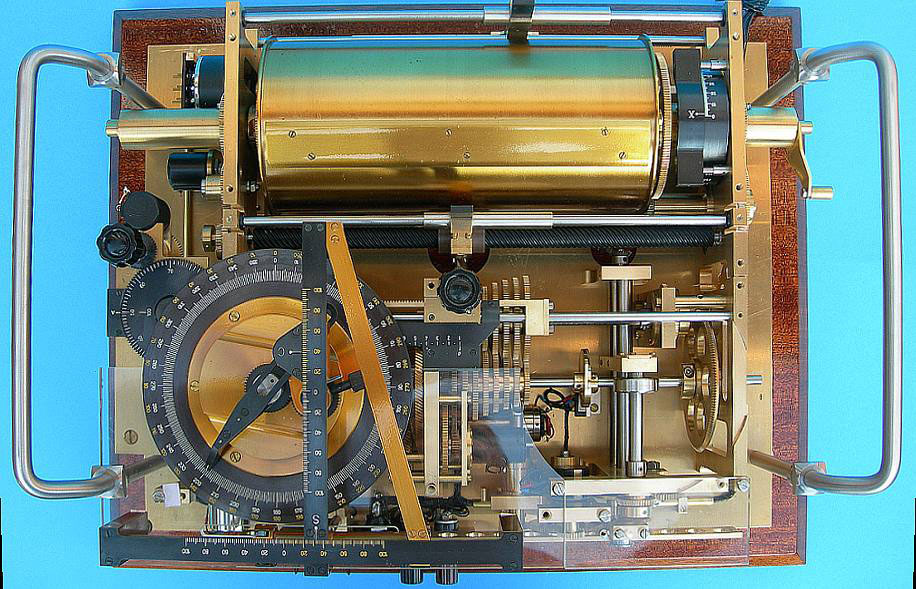 An overhead view of the Harmonium.

Tatjana is someone who, in the period of the renaissance, would have been called homo universalis. A person with interests and skills in many areas: artistic, cultural, mechanical and scientific. As an independent researcher, Tatjana’s work has taken her into many regions of scientific study. She started early, building an oscilloscope from scratch at age 14.

For a living, Tatjana worked as a scientific consultant for large technological firms, the government, and military institutions. Using science and instruments as her tools for analysis, she studied complex problems to get to the very root cause, and hopefully offer solutions. 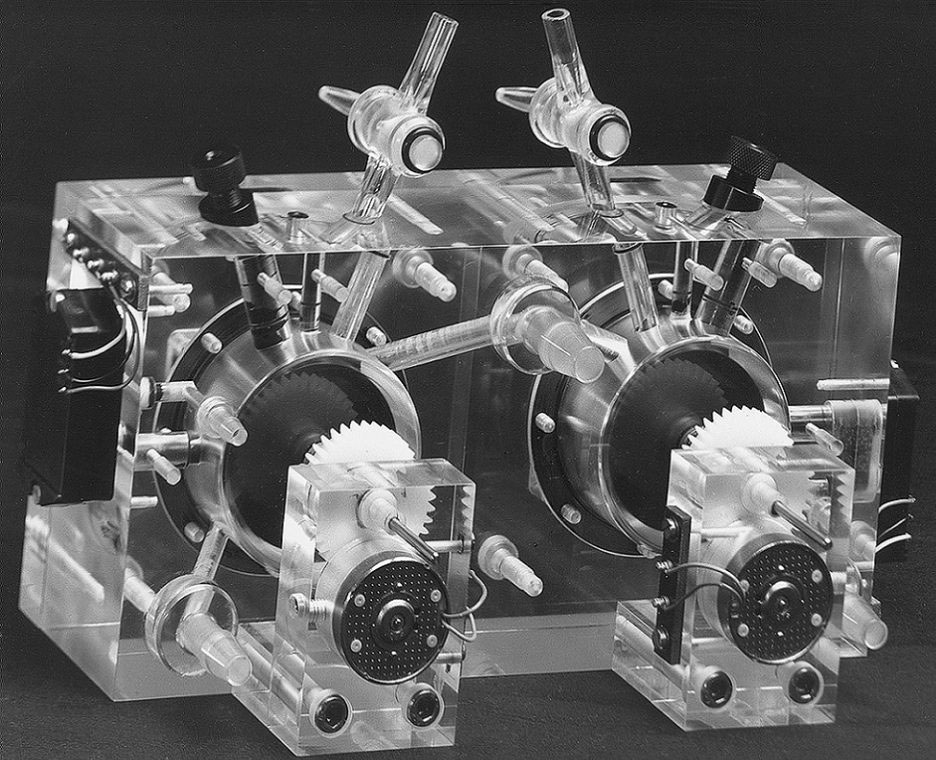 Tatjana’s machined plexiglass sample from 1984. There is absolutely no way to hide mistakes here. (Photo courtesy of Tim Samshuijzen.) 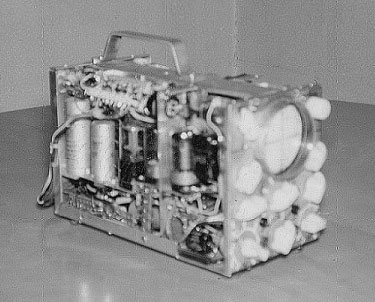 Tatjana built this oscilloscope in 1958, when she was just 14 years old. Her interest in scientific instruments was established at an early age.

In doing so, Tatjana has been able to explore many areas of study in electronics, including power systems and logic systems in relays and electronics. In fact, she has a complete operating electromechanical telephone and telex switching system in her home.

In the field of cryptology, Tatjana did work that resulted in the design and construction of an improved version of the famous Enigma cipher machine from World War II. She also worked on aircraft avionics, navigational inertial guidance systems, radar, and weapons control systems. In her home, Tatjana has also restored a highly complex, functional navigation and bombing system from the English Vulcan bomber.

Tatjana’s work took her into the field of optics, including lens coating by vapor deposition. It also included ventures into organic chemistry with the production of instruments for the pharmacology industry. That included making IR/UV spectrophotometers, and analytical and micro balances.

Additionally, Tatjana has also produced working models of historically significant telescopes and other instruments, from barometers to polarimeters. 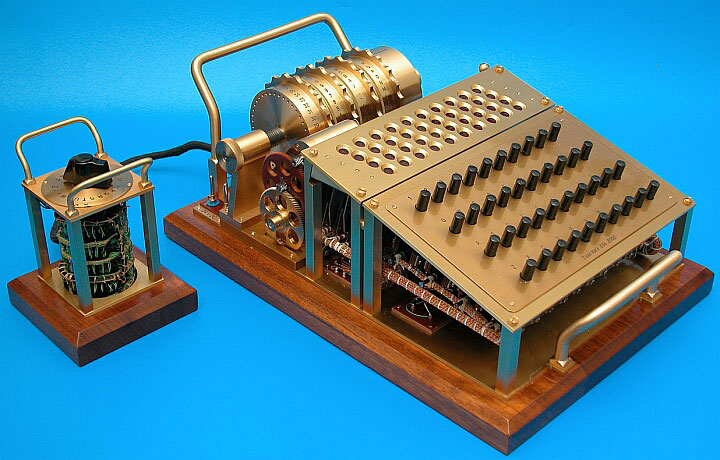 The capture of a famous German Enigma coding machine, and the subsequent breaking of its code, was a key event in WWII intelligence gathering. Tatjana says her cryptograph is not an Enigma machine, but is based on the same principle. (All photos of the Cryptograph courtesy of Tim Samshuijzen) 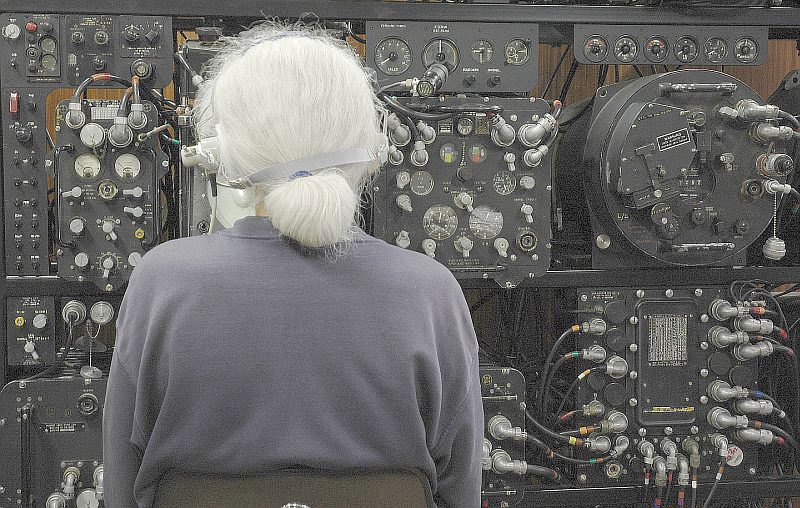 A rebuilt navigation and bombing system (NBS) resides in Tatjana’s home. The NBS includes an H2S Mk 9A, and Navigation, Bombing and Computer (NBC) of the type used in British V-bombers Victor, Vulcan and Valiant. (Photo courtesy of Tim Samshuijzen.)

Although many of her projects appear to be simple reproductions, these instruments often include improvements that came as a result of Tatjana’s deep analysis and understanding of the underlying principles of the device. One constant in all the projects, however, is the stunning craftsmanship, attention to detail, and fine finishes that make each piece a pleasure to behold and study.

This is made possible in part because Tatjana has put together a fine collection of high quality machine tools in her own shop. Following the classical tradition, many of her pieces are signed and dated by the maker: TJvV fecit. With permission and the help of her friend and webmaster Tim Samshuijzen, we have included images of some of Tatjana’s most impressive projects.

Tatjana’s personal website has a more complete selection of detailed photos from Tatjana’s broad array of projects. Her poems often augment the work as well—another aspect of her talents. The most important feature to be honored here, however, is the wonderful craftsmanship with which these projects were constructed. Whether or not you understand the function of the project, take note of the care and precision with which each part was built and presented. This is scientific craftsmanship taken to the highest level. 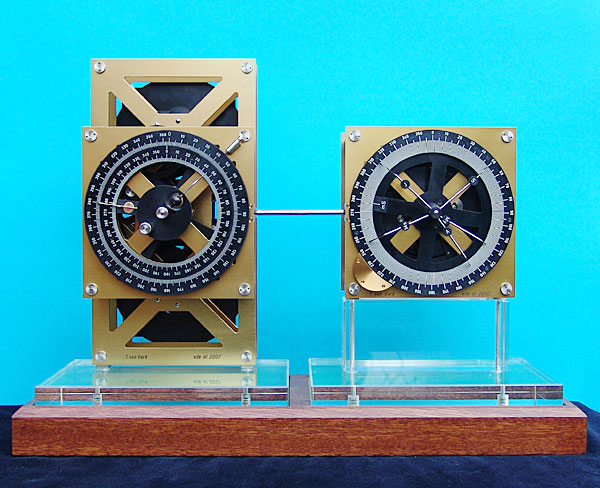 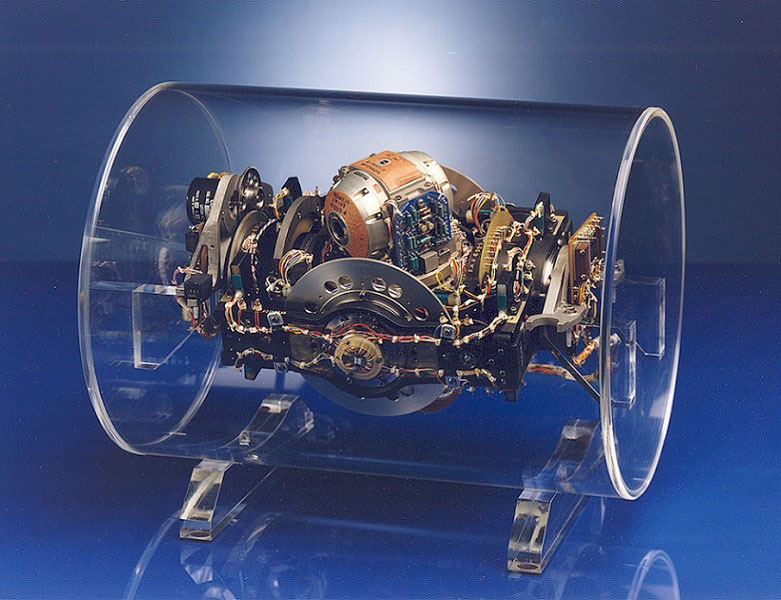 Tatjana sent in some photos and a description of her workshop. Her machining skills are completely self-taught. Tatjana’s workshop isn’t large, but the machines are high quality, keeping up with the demands of her precision work. The following is Tatjana’s description of her own machines:

“The remark that you make about the desirability of a description of my workshop facilities is a good one, therefore let me present my cast-iron friends:”

“The lathe (1978) is a non-standard Myford super 7, it has the optional extended and hardened bed. I added digital read-outs, in those days not common at all, and a variable DC drive controlled by the hand wheel in front of the stand. Pulling the hand wheel in the zero position before rotating reverses the direction of the motor. In the zero position there is active electrical breaking, a great convenience. Practically all Myford accessories were acquired over the years.” 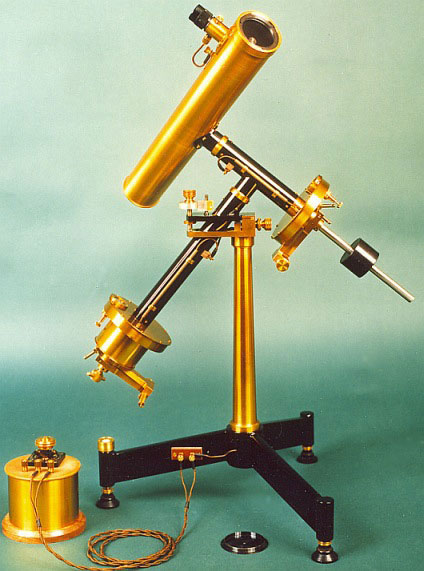 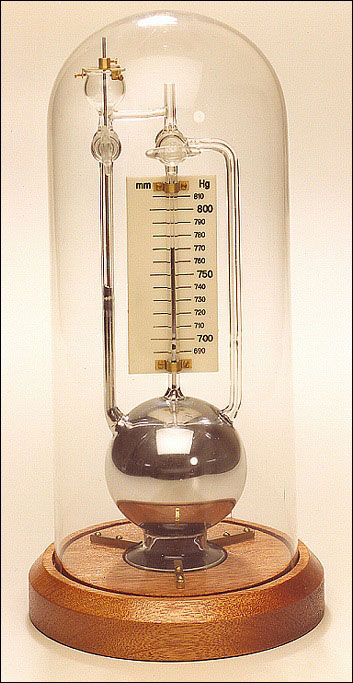 A vacuumless barometer made in 1977. (Photo courtesy of Tim Samshuijzen.)

“The milling machine (1983) is a Deckel FP-1 with a wide range of accessories, some homemade. It is not NC, but is has a system that allows servo positioning from the keyboard, but only on one axis at a time—either to an absolute position or incrementally. The machine is shown in an elementary gear cutting configuration. Please notice the ‘overhead traveling crane’ contraption, a must (for me) to handle the heavier accessories safely.”

“Next, a Deckel GK-21, an occasion, a 3D copying and engraving milling machine acquired a few years ago. Before that I did all engravings on the much older Lienhard machine. For the Deckel there is a small grinder, Deckel SO, to make or sharpen special cutters.”

“Then there is the necessary sheet working equipment (1977) of modest size, 65 cm working width. Shears, bending machines, inside corner cutters and a punch.”

“Of course there is a collection of measuring equipment of good quality.”

“So far the machine shop, as you see is a modest outfit, nothing exotic or supernatural. I do my own electroplating, by the way.” 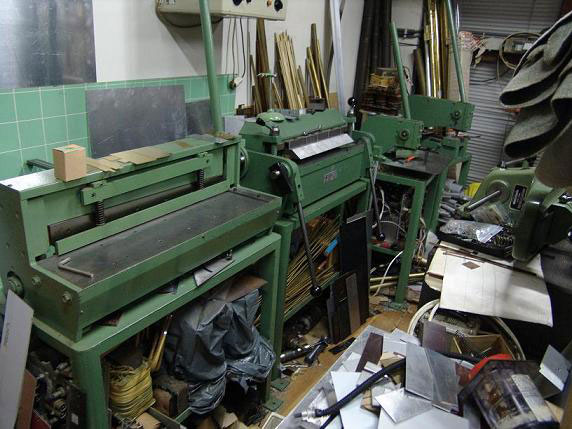 Tatjana noted that her shop contains “nothing exotic or supernatural,” although the projects that come out of it certainly contain a little metalworking magic. Some of her sheet metal bending equipment is shown here. 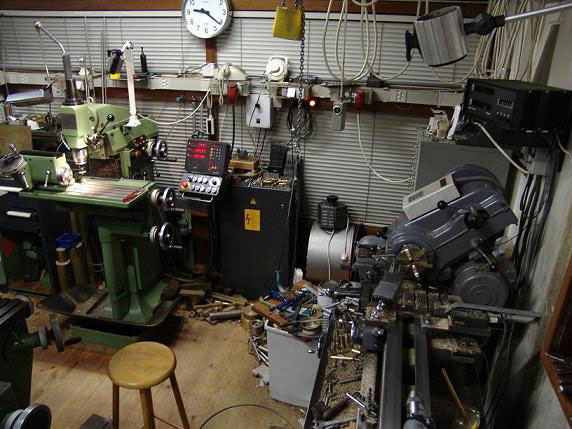 The Deckel FP-1 mill and Myford lathe can be seen here.

The projects shown on this page are just a few from Tatjana’s wide range of work. We chose to highlight those that feature her machining skills most prominently. Her own website covers many more projects that delve into other areas of scientific inquiry. We also would like to thank Tim Samshuijzen for permission to reproduce his excellent photographs of Tatjana’s work.

Watch a video of Tatjana demonstrating and explaining some of her wonderful projects. The narration is in Dutch, but the video is instructive regardless.