Bill Brown surrounded by some of his creations.

For some background, William T. “Bill” Brown, and his wife Roberta, lived in a Victorian home in Redlands, California, for over thirty years. Their home was believed to have been built in 1881 by Frank E. Brown (no relation), who was one of the founders of Redlands. Bill and Roberta were both active community members, and each of them liked to participate in creative hobbies. Over time, Bill garnered a lot of attention for the collection of pedal cars he constructed. He was frequently invited to show them at special events in Redlands, and throughout Southern California. At one point, he had a collection of some 70 cars—at least 20 of which were made by Bill personally.

For Bill, creativity meant hours of design and meticulous craftsmanship. The focus of his creativity just so happened to be on toy autos and assorted trucks, which children would pedal up and down the driveway (known as pedal cars). Bill’s creations, however, are works of art—gleaming painted metal with polished chrome and brass trim, and spoked wheels made from scratch. Bill’s pedal cars were in a league of their own, and his skill as a craftsman is evidenced by these creations.

We regret to inform that Bill Brown passed away on September 27, 2007. We are grateful to have had the opportunity to gather this information, and the photographs from Bill, when he was added to our craftsmen list back in 2004. 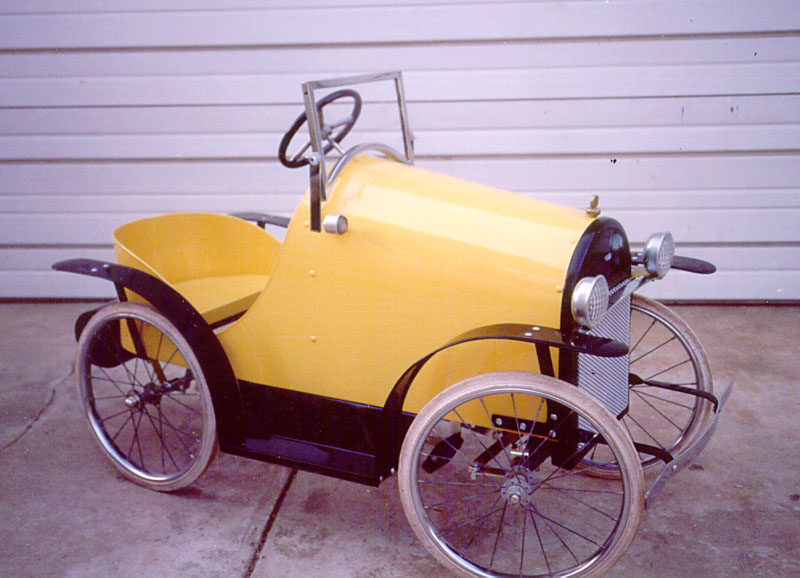 Bill’s first metal pedal car was not built to represent any particular vehicle. It did have a lot of appeal, though, and he found it really fun to build, so he just kept going from there. 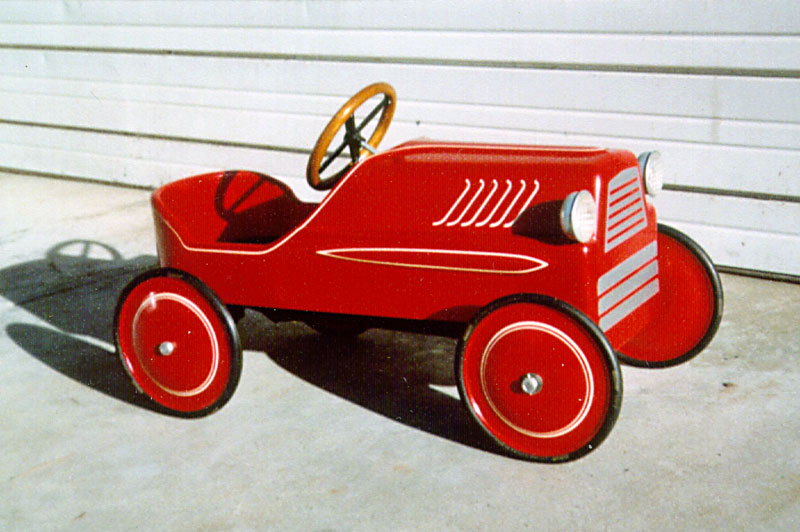 Bill’s first pedal car, which was actually made of wood.

What Started as a Display Turns Into the Main Attraction

It all started when Roberta Brown wanted a rocking horse and pedal car to display the dolls she had made. Bill had previously built a beautiful wooden wagon from a picture he found in an old Sears catalog. The antique replica wooden wagon was emblazoned with “Redlands” on the side, and was filled with teddy bears in the entrance to their home.

Taking up Roberta’s request, Bill’s first pedal car was built from wood, and patterned from a Garton hot rod photo found in a book. This wasn’t too difficult an undertaking because Bill had worked in auto body repair for most of his life.

In the late 1960’s, Bill had grown tired of restoring real Model A’s, and began the hobby of building and flying gyrocopters. A gyrocopter is a rotary wing aircraft that looks like a small helicopter. The difference is that it’s pushed by means of a propeller, and the blades that rotate overhead are only powered by the craft’s forward speed. It takes off and lands like an airplane, rather than straight up and down like a helicopter.

From 1964-73, Bill became an active gyro pilot flying at El Mirage dry lake. He also became a member of the Popular Rotorcraft Association (PRA) Chapter 1. Bill designed the first gyrocopter to use a Volkswagen engine, and flew it in different places in California. He also put the gyrocopter on a trailer and flew it in Raleigh and Edenton, North Carolina. Eventually, Bill would donate the aircraft to the San Diego Air and Space Museum in Balboa Park. 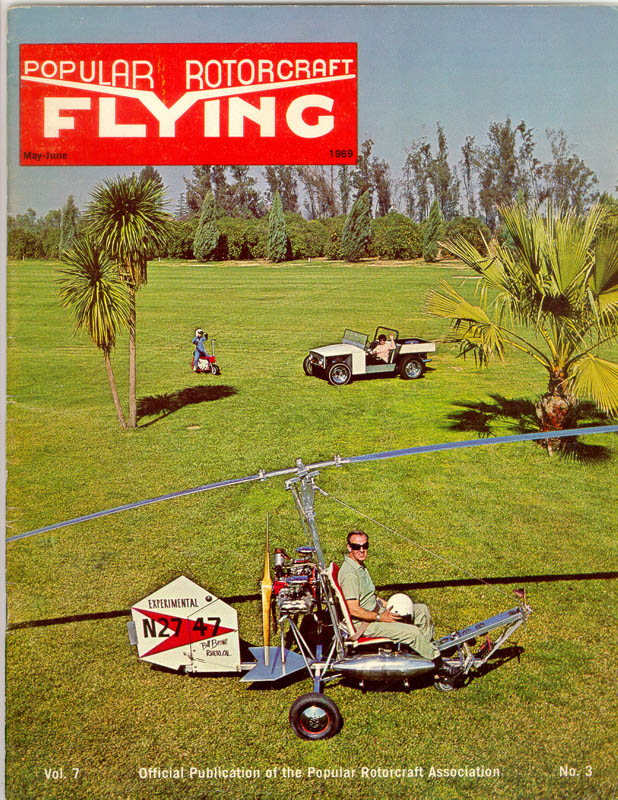 Gaining Years of Experience in the Body Shop

Having owned a body shop, and being in the auto body repair business for all of his life, Bill had plenty of experience and knowledge to build his pedal cars. It didn’t take long for him to start making the cars from metal, rather than wood. For the cars, Bill handmade the body, fenders, windshield, bumpers, running gear, wheels, and even the grills. All of the work on the hand-built cars was done by Bill himself. He would make the wooden spoke wheels for the pedal cars with a band saw and wood rasp. It took an average of 250 hours to build a given car. Additionally, the chrome and accessories could run from $800 to $1200 per car.

He also restored some 40 other old pedal cars. 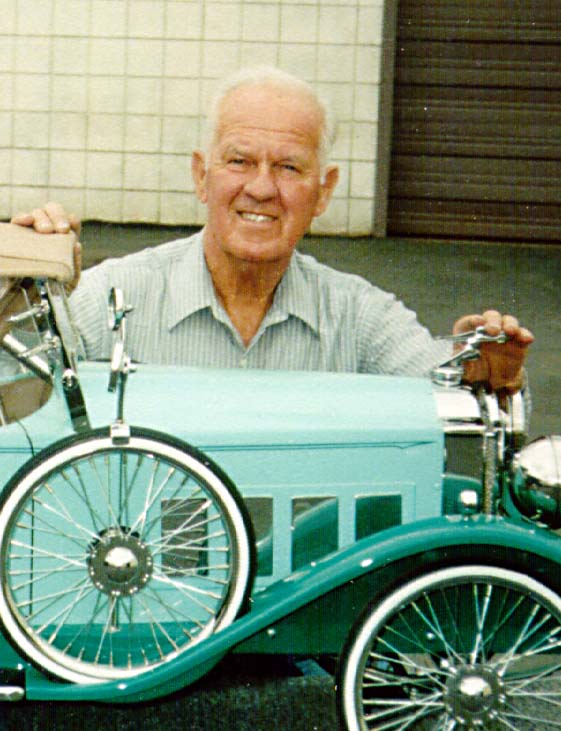 “People get mad when I tell them the cars aren’t for sale,” said Bill in the December, 1997 issue of Reminisce magazine. “But if I sold ‘em, it would get to be a job. I find pictures of antique autos and then build them from those. They’re not to scale—they’re a reduced version.” He went on to say, “I like to accomplish something. It feels so good when people admire the cars and say they look nice.”

”If I had to describe Bill Brown in one word, it would be craftsman,” said Craig Fleetwood, editor and publisher of Pedal Car News, in a 1994 article. Bill says that making pedal cars from scratch brings him great satisfaction. “It’s a creation, just like anybody building a work of art. I’m more pleased with one I make than one I restore.” 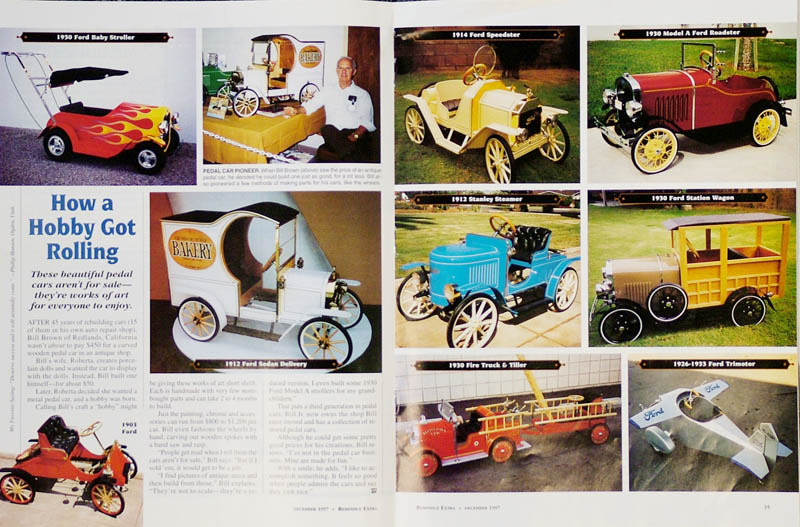 A nice article in the December, 1997 issue of Reminisce magazine features Bill and his cars.

When Bill makes the cars, he starts with a flat sheet of metal, very few tools, and no physical plans. Then, he bends, molds, cuts, and sculpts until he creates a fully fledged car. Perhaps surprisingly, the cars are fairly accurate replicas of the real vehicles, only there is no engine, battery, or solar panels. Instead, the vehicles are moved along by the rapid shuffle or pedaling of a child’s feet.

“I start building from the front, and hope the back end comes out like I want it to,” said Bill. When working in his auto body shop, Bill would spend slow hours making pedal car parts. He noted that there weren’t an abundance of tools for crafting metal. He had a metal bench, welder, small press brake, drill press, and a hammer and dolly (a piece of metal held in your hand to back up the metal you’re hammering on). In constructing pedal cars, he essentially became a sheet metal worker. Bill noted, “That’s flat metal, and different than body and fender work. When you’re doing body and fender, you’re taking it to where it used to be. With sheet metal, you’re taking it where it’s never been.” 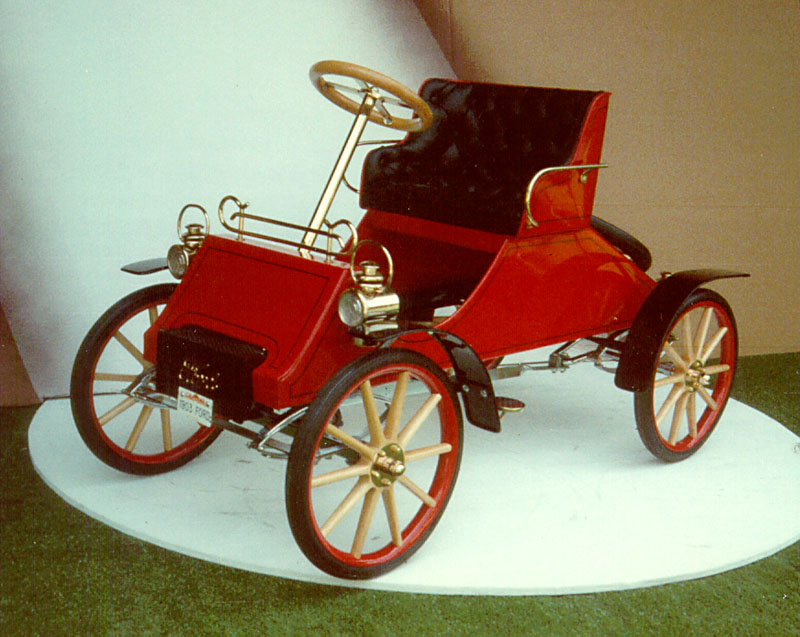 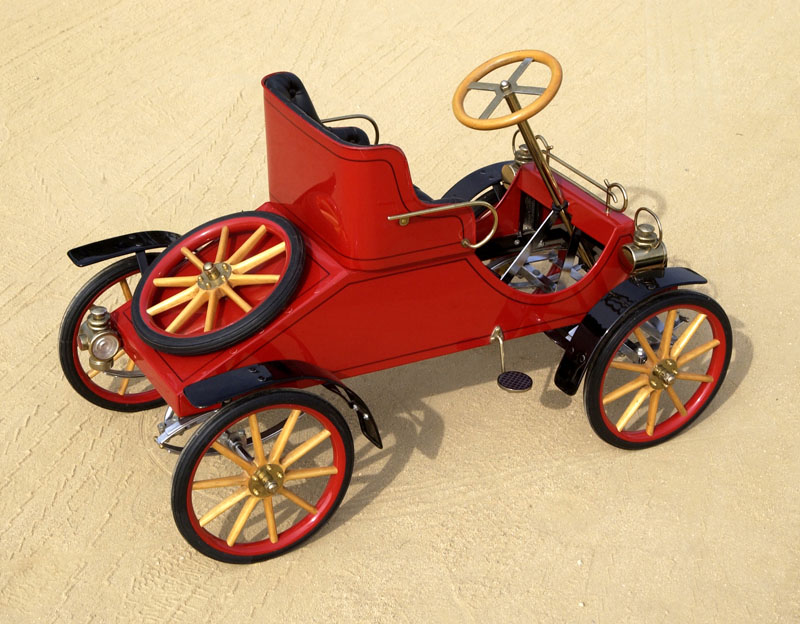 The Ins and Outs of Collecting and Restoring

After he got started building his own pedal cars, Bill developed an interest in restoring some original pedal cars. Many of the cars that Bill would restore were originally built in the early to mid-1950’s. It would usually take him about 2-1/2 to 3 months to complete a car, whether he was building or restoring. He also hired a professional in San Bernardino to do the upholstery and striping on his cars, but every other facet was done by Bill himself.

Now, the old pedal cars that Bill found at auction houses could sell for anywhere between $100 to $3000, depending on their age, rarity, and condition. When restored, they could sell for up to $5000. Bill would find the old cars in a variety of places, including antique stores, thrift shops, and occasionally peoples’ garages. “There are a lot of things hiding in the weeds out back behind sheds that people are all too glad to be rid of,” remarked Bill.

Showing His Cars at Prestigious Events

As he progressed, Bill found it difficult to part with the cars on which he had spent so much time building. He really wanted to see his cars in a museum one day. Fortunately, some of Bill’s cars were indeed shown at a number of venues. They were displayed for one three-month period at the Petersen Automotive Museum in Los Angeles. Then, some of his cars were featured at the San Bernardino County Museum in 1996. He also exhibited his pedal cars at many shows, including the Concourse Car Shows at Torrey Pines, Palos Verdes, Santa Barbara, Beverly Hills, and other car events in Southern California.

At some of these shows Bill even had the opportunity to meet several celebrities. Jay Leno was a fairly frequent visitor to some of these shows, and one time Bill even spoke with film director James Cameron about the Stanley Steamer car that the director owned. For a while, Bill would actually keep nine of his crafted pedal cars stored in loaded position on a truck so they were ready to take to the next show. 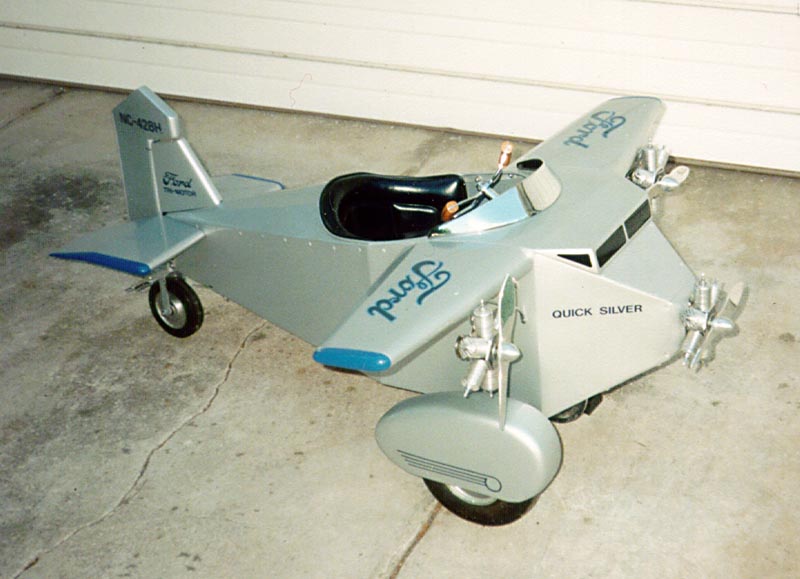 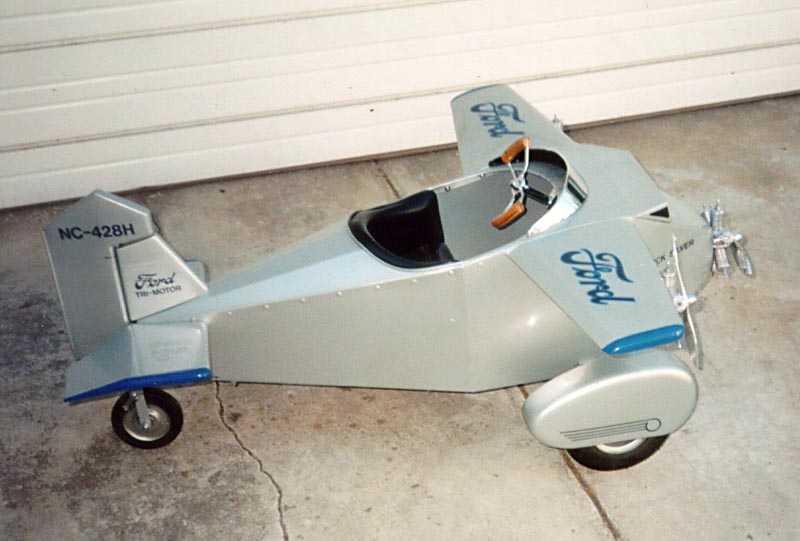 Pedal cars weren’t only modeled after cars. Tractors, airplanes, and other vehicles were popular among early manufacturers. Here, Bill has modeled a Ford Triplane.

Satisfaction Comes From Perfecting the Craft

Bill once remarked, “I guess that even after spending my life fixing regular cars, I didn’t quite get enough of the work. One of the very first things that I do when I start restoring an old car is to take the dents and dings out of it. You have no idea how many dents a child can put into a car this small.”

Out of the five early manufacturers of pedal cars, none are in business today. The deluxe pedal cars were bought only by the wealthy in the 1920’s and 30’s. Bill said that restoring old cars and creating new ones both require different skills. The new cars take more imagination, while old ones require undoing the damage of decades past. “There’s real satisfaction in creating something that works as smoothly as a pedal car,” said Bill. “You really can take one and get it to the point that it’s just about perfect.”

Originally a native of West Virginia, Bill later moved to Ohio and joined the Navy at age 17. He served from 1945-46. Afterward, he went on to work for an Ohio Ford dealership where he learned the body and fender repair trade. Bill moved to California in 1950, and established Brown’s Auto Works in Rialto, CA in 1959. He would eventually sell his business in 1973, and it was repurchased by his son 15 years later.

During this time, Bill also taught school for nine years in the Regional Occupational Program (ROP) at San Bernardino Valley College. His classes included body shop, frame, and related subjects. In 1985, Bill retired from another business that he owned—Brown’s Enterprises. They manufactured equipment for body shops and sold internationally. After retirement from his body shop, Bill established a workshop away from home for manufacturing measuring systems. When that slowed down, he started making pedal cars.

When asked about the early influences in his life which led him to building pedal cars, Bill said, “Mostly it was all by myself. When I came out of the Navy, I wanted to be a mechanic, so I went into body and fender work. But really it was my wife. It’s her fault (for wanting a wagon for her dolls).” 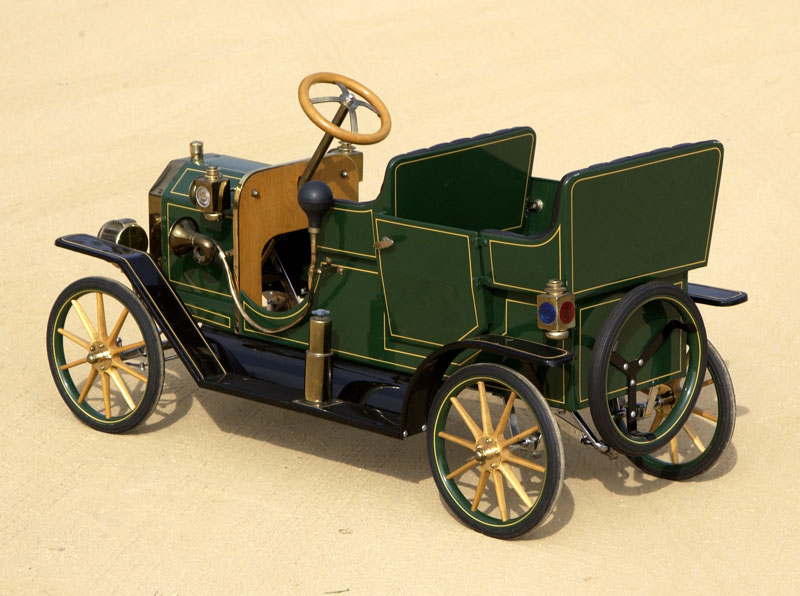 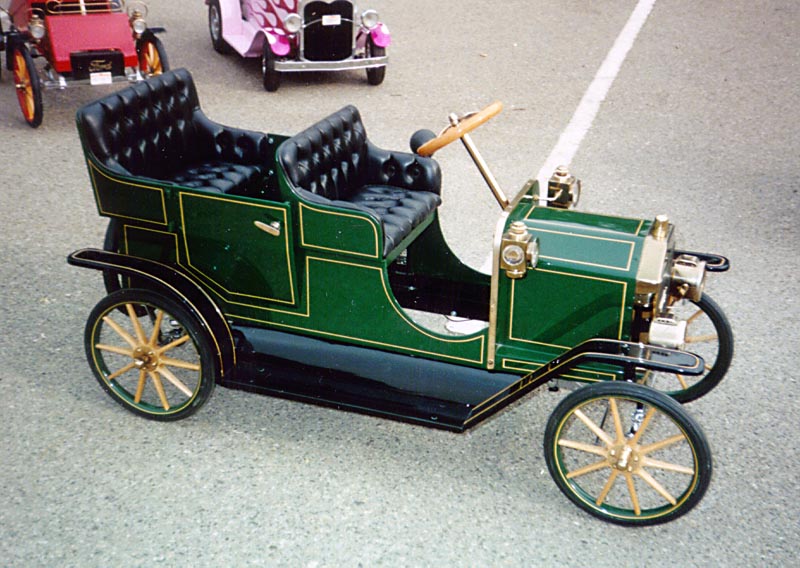 Bill’s advice for craftsmen, and really anyone trying to develop their life’s work is to, “Make sure you’ve got a hobby you really like.” When he gave talks to young kids, he told them, “When you like something, learn to do it well, and then get good enough at it that you can make money at it.”