Museum Quality Dioramas Freeze a Moment in Time in 3D 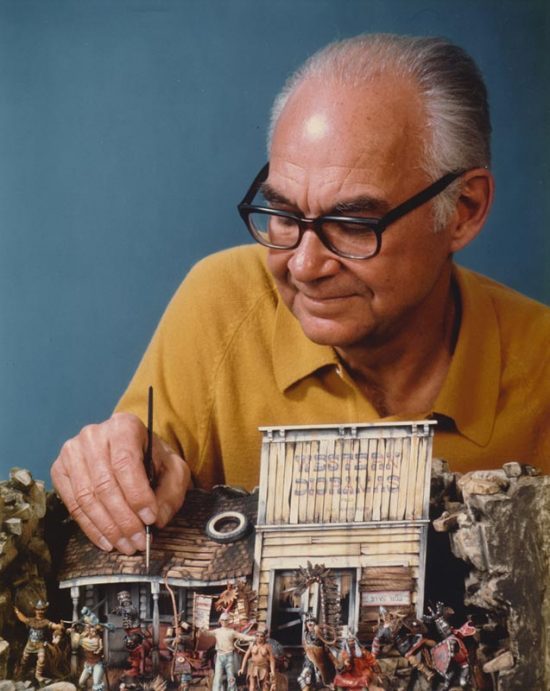 Dioramas are a form of art that preserve not just an object, but an entire scene or moment in time. They might be populated with dinosaurs, armies, historical figures, or countless other features. Ray Anderson put a great deal of time and thought into building an effective and encapsulating diorama. He built over 100 of them, and even published a book illustrating many of his techniques. In order to represent large expanses in a small area, certain tricks of perspective, lighting, and color are used to achieve a desired impression. Ray’s craftsmanship skills are evidenced by his dioramas, many of which are now in museums or private collections. Some of his favorite subjects to document are scenes from the historic American West, but Mr. Anderson has illustrated a wide range of scenes through his dioramas.

From Engineering to Model Making

Ray earned his degree in mechanical engineering as a young adult, and then worked in management positions within the automotive and aerospace industries for 30 years. From 1972 onward Anderson worked full-time on his miniatures. His specialty was boxed dioramas. Ray first won a “Best of Show” award in 1968, and his work would continue to be rewarded over the years in both England and the USA. He was the second person to be made a Grand Master of the Miniature Figure Collectors of America. Ray’s book, The Art of the Diorama, was published in 1988 by Kalmbach Books, and it remains an outstanding reference for miniature figure makers and diorama modelers. Material for the book was drawn from articles that first appeared in Fine Scale Modeler magazine. 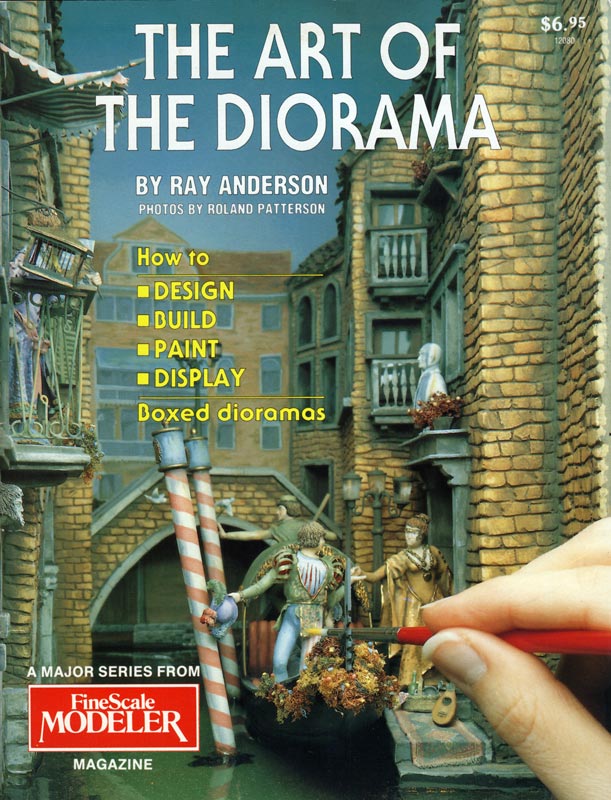 This is the cover of Ray’s book on making dioramas. Used copies can still be found online. There is also a copy in the Craftsmanship Museum library.

An Interest in Building Began Early

Mr. Anderson recalled that even as a child, he always had a workshop and a passion for building things. In his teenage years, he entered the Fisher Body Coach contest that was sponsored by General Motors. The company would supply plans for a vintage coach that represented the “Bodies by Fisher” model used in early GM cars. The coaches were quite ornate, and Ray completed a beautiful model which is pictured below. Unfortunately, it took quite some time to build, and by the time Ray was done the contest had been discontinued. Years later he worked on full-size cars including the restoration of a 1925 Grand Prix Bugatti. Moving forward, Ray’s interest would shift to live steam. He completed a miniature live steam locomotive using a set of plans and castings from Little Engines of Lomita, CA. 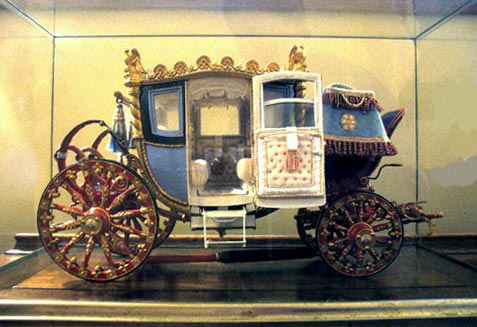 One of Ray’s first projects was this Fisher Body Coach, which was built for a contest put on by General Motors. 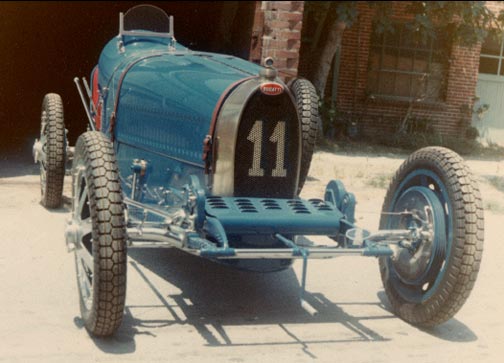 Ray helped with the restoration of this full-size 1925 Grand Prix Bugatti. 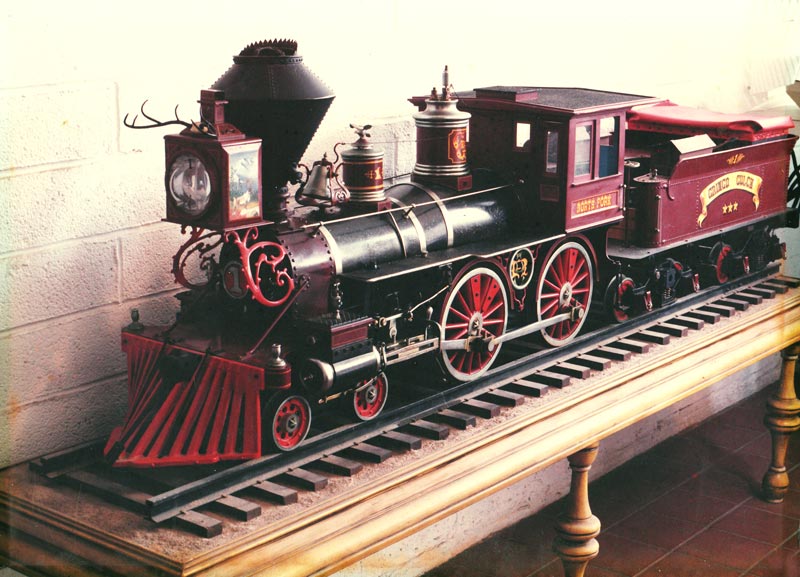 Following his interest in live steam locomotives, Ray built this 4-4-0 from a casting set.

A Start in Modeling Figures Leads to Dioramas

While staying in New York once, Ray saw some beautiful 54mm lead Napoleonic soldiers. He felt inspired to make something similar. However, most of the lead figures that Mr. Anderson saw were crude, with their clothing often made from lead toothpaste or paint tubes. Luckily, it was around the same time that Ray discovered some very detailed plastic Napoleonic figure kits made by Historex. These figures could be modified by adding dissolved plastic with a brush, and clothing could be made with plastic-coated Kleenex. Additionally, hair, fur, and other textures could be added using the hot tip of a soldering iron. He found that the settings could also be created with Durham wood flour putty. These developments would allow Ray to begin producing his boxed dioramas, as he was able to create detailed figures along with an appropriate surrounding.

Creating an effective diorama required solving many problems for Ray. Lighting could be controlled using small, cool long-life fluorescent lights. Easy access to the scene could be achieved with magnetic latches on the case front. For the backgrounds, a lot of experimentation went into the painting techniques. By manipulating color and perspective, he was able to achieve amazing results—such as simulating a 2000ft deep canyon in a space only 1-1/2 inches deep. Ray also developed techniques using clear resin to imitate water in every form—from quiet pools to raging waterfalls. He had gathered the tools and materials needed to model nearly any scene. Ray even attempted to show the passage of time in his work, making two dioramas of the same scene, but as they might appear 100 years apart. His work often included an element of humor as well, which helped to engage the viewer on a more personal level.

In addition to his favorite subject, the American West, Ray depicted a wide range of scenes in his works. He made dioramic scenes of historical significance, fantasy scenes with dragons, and even an outer space scene featuring a stranded astronaut. Almost any subject can become the basis for a well-told story taking place inside these small dioramas.

In his book, Ray offers some advice to diorama builders in saying, “Always—that’s ALWAYS—make sure that each diorama you set out to build has a story to tell!” Ray took his own advice when considering how he could make his hundredth diorama particularly special. He decided to model the High Altar of the 17th century Benedictine Abbey in Weltenberg, Germany. After completing the Altar, Ray said he lost some of his interest in building more dioramas because he could not find a subject more difficult than that one. 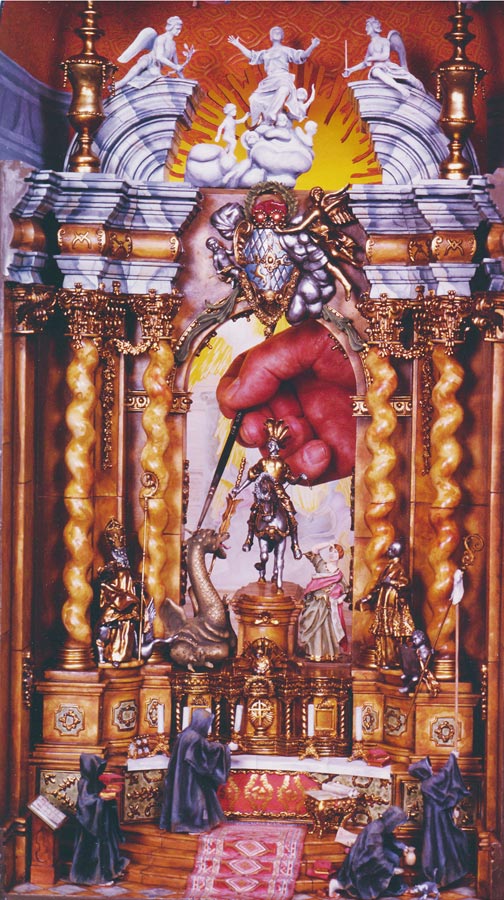 Ray’s hand with a paint brush provides some scale for this scene. Converted from Historex 54mm military figures, enlarged to about 60mm tall. Ray made the clothing from Kleenex coated with dissolved plastic. Many of the ornate, repetitive details were cast in epoxy using RTV molds. Most of the patterns are made from styrene. Small neon light bulbs are hidden behind the front wall to light the scene from behind.

What Makes a Successful Diorama?

In his book, Ray cites ten important elements that make for a good diorama subject. After building many pieces, he noted that the following things will help any diorama:

Ray notes that like any long list of rules, these aren’t meant as strict guidelines for every single diorama. Rather, understanding the reasoning behind each tip is key to understanding what makes an interesting scene. Ray also feels that an element of humor should be included in each scene if possible. He says that, “While many viewers are turned off by serious or unpleasant subjects, humor has universal appeal. Humor also helps break down the ‘fourth wall’ by providing the viewer with something he can easily relate to.”

From the Real World to the Virtual World

After many years of diorama building, Ray turned from physical models to computer graphic animation. He noted, “It is interesting that at 91 I have turned back to the diorama concept, but this time I have placed a 3D model of myself back 150,000 years to visit with the Neanderthal. I have also reduced my size to 10 billionth of a meter to take you on a tour of the human cell.”

Obviously, Ray likes a challenge. You can see some of his computer work on YouTube by searching for “Our Other World: The Cell”. This is the first segment.

In the dedication to his book, Ray summed up the experience of having to find unique solutions for his complicated dioramas in an era without the convenience of the internet. He writes:

“This book is dedicated to all my fellow box builders who have had to develop the many diversified skills required on their own—the hard way. Like me, most have spent countless lonely hours at their workbench, agonizing over a problem and wondering whether there might be someone to help. In the early days of boxed dioramas kindred souls were few and far between, and even protracted pondering over a problem eventually yielded the same old conclusion: ‘Solve it yourself!’”