Below you can view several of Ray’s detailed dioramas. Click on images for an enlarged view. 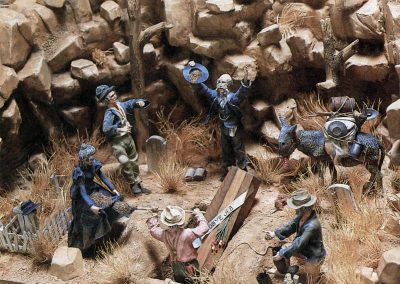 This diorama is based on a true story. As the figures dig a grave to bury old prospector Jeb, they discover gold. Note that the preacher’s hat is full of gold nuggets, and the grave digger is shoveling gold into the widow’s apron while a friend in the lower right fills his boot. Details to set the scene include the widow’s bonnet set on another grave marker, and the pack mule loaded with gear. 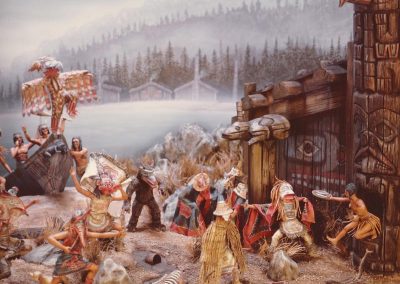 “The Coming of the Killer Whale People”

This piece includes a misty background painting to give the scene even more depth. The puddle in the center is styrene, and was installed before pouring the groundwork. The converted Historex figures are about 60 mm tall, making the scale approximately 1/25. 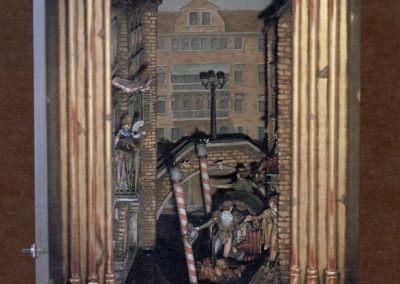 An example of a more ornate outer case can be seen in this Venice canal scene entitled, “Venezia.” The frame was covered with genuine 23-carat gold leaf and then abraded, allowing the red undercoating to show through and establish an authentic older look. 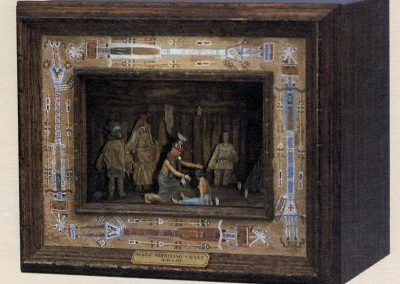 This box includes a complex double-molding front frame with Native American paintings in the matted area. Ray finishes each box so that it may be displayed comfortably, even in rooms with formal furnishings. 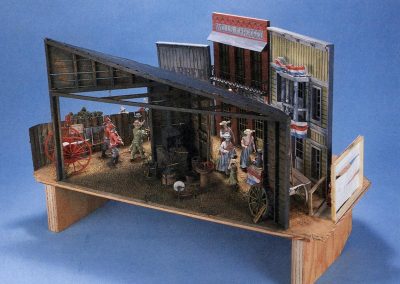 One of Ray’s favorite subjects was the 19th century American West. This diorama depicts a parade, but the point of view is from inside a blacksmith’s shop. This first photo shows how the scene is constructed with the use of many interesting angles. 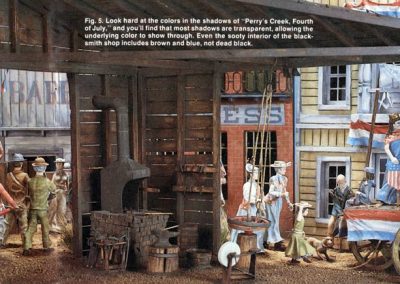 This second photo shows what the diorama viewer actually sees. Though much of the foreground is shrouded in shadow, the actual scene takes place in bright sunlight outside. Ray noted that his use of color includes many transparent layers. Even the sooty interior of the blacksmith’s shop is built up using brown and blue, not black. 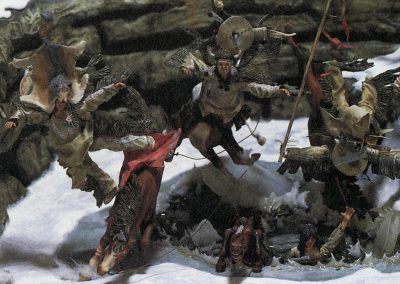 This western scene displays a full range of water-making techniques. The froth, splashes, and ice flows are a combination of shaped acrylic and filled-polyester putty. The scene itself is full of detail, particularly in the clothing and animals. Additionally, the modified sculpted figures display a lot of action as they tumble from their horses and break through the ice. You can even see snowshoe tracks where the trapper that these figures are following had already walked in front of them, only without going through the ice! 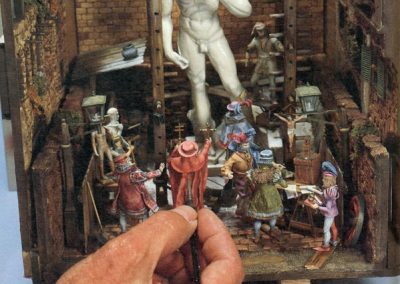 This boxed scene entitled “Il Gigante” portrays the sculpting of Michelangelo’s colossal “David” in 60mm scale. Although the sculpture of David is 14 feet tall, this tiny diorama fits in a box only 1 foot wide and deep. Most of Ray’s figures start out as plastic soldiers, which he cuts, trims and repositions before adding details like clothing and hair. The final step, shown here, is painting. Another trick to make a small space seem larger to the viewer is to “force” the perspective by having the side walls angle inward, and taper slightly. This can distort perception in an effective way for the viewer. 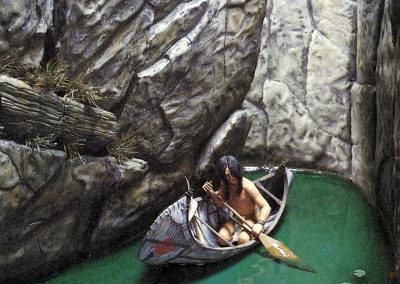 This untitled scene of a Native American in a birch bark canoe depicts a calmer water condition using multilayer colored polyester resin. Lily pads float on the water surface, and a big catfish swims lazily to the right of the canoe. The canoe paddle extends down into the water. 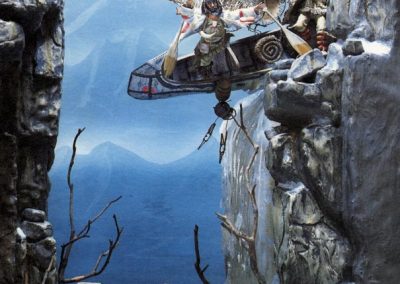 “A Problem on the Powder River”

This diorama displays dramatic action. As a canoe carrying explorers is launched over a waterfall, figures and their traps go flying. The rear figure tries to save himself by throwing a rope over a tree stump, but will it work? 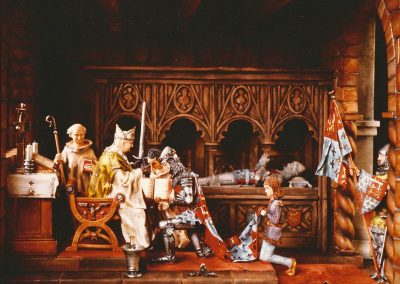 This historical scene shows John of Gaunt (father of King Henry IV of England) in 1359. The significance of historical subjects in diorama scenes isn’t always apparent to viewers. Ray learned over time that certain elements are needed beyond simple historical accuracy to make a scene appealing to the audience.