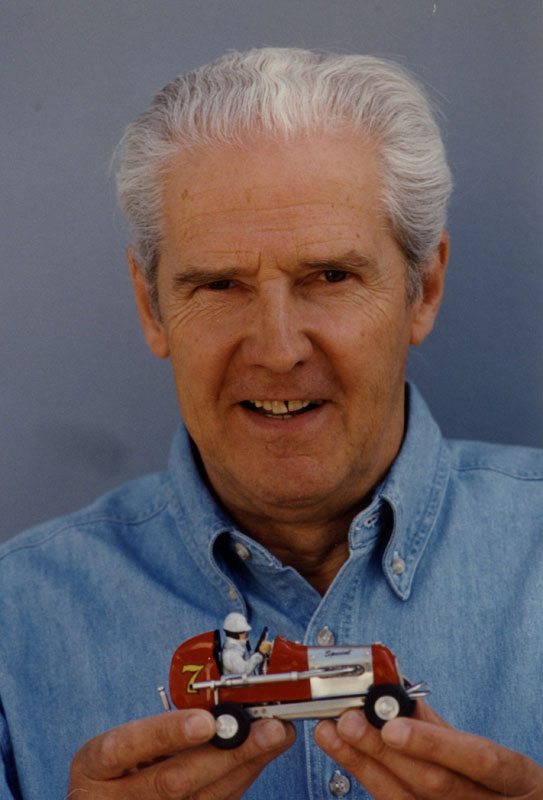 Building Engines for the Fun of It

When Joe Martin decided to get into sports car racing in the early 1990’s, he had to get a competition license through the Sports Car Club of America. One of his instructors there, Scotty Hewitt, shared similar interests in fine tools and small precision projects. Both gentlemen had knowledge to share with the other, so they worked out a trade—race car lessons in exchange for miniature tools and basic machining instruction.

In hindsight, both later admitted that they didn’t think the other had much chance at success in these ventures. Fortunately, both were proven wrong. Joe went on to race vintage cars and Formula Ford, winning the San Diego Region Formula Ford title in the 1990’s. Scotty went on to win one of the only contests for miniature machining in the world—and he did this not once, but three different times.

To start, Scotty’s exciting background in the world of speed, combined with his exuberant attitude, made him an enjoyable craftsman to be around. The following page tells a little more about the man, along with his fun creations.

Born and raised in Glasgow, Scotland, William James Hewitt became known as Scotty because of his uniquely colorful Glasgow accent. Scotty’s racing involvement began in Scotland during the 1950’s, and it continued for many years.

Over the course of his career, Scotty raced against the legendary Jim Clark, crewed for the famous Ecurie Ecosse team in Europe, raced speedway bikes and stock (salon) cars in Britain, and ran Jaguars in Cal Club races during the 60’s and 70’s. From 1985-1996, Scotty held a half dozen Regional Championships in GT-5 and G production, driving Datsuns and Triumph Spitfires. He went on to become an SCCA driver instructor for many years, and received the “Driver Instructor of the Year” award from Cal Club in 1996. 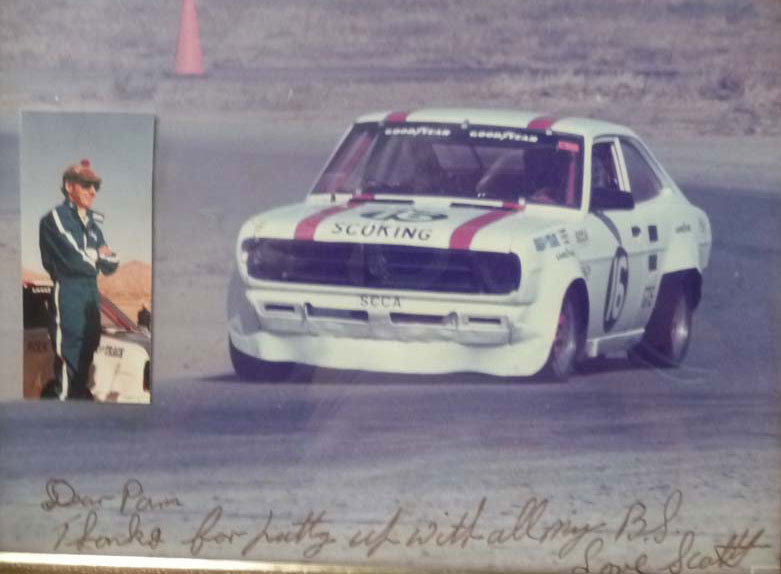 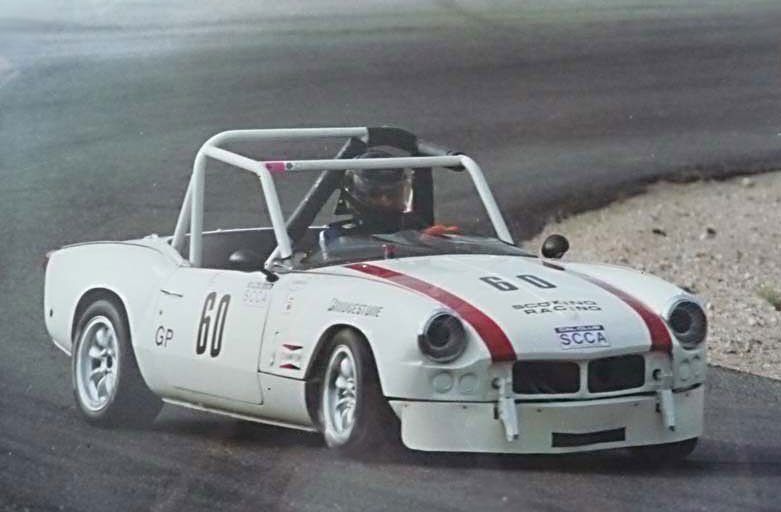 Following a long career as a mechanic (primarily for Jaguars), Scotty went on to work with Triumph, Rover, Jaguar, Maserati, Lotus, and Jensen automobiles as a service engineer. In those roles, Scotty represented the factories and worked for the importers. This work gave him an opportunity to travel to Italy, France, Canada, and Hawaii. He always looked for unique toys during these trips.

In 1973, Scotty started a mail order business with a catalog called, “Miniature Cars of the World.” That catalog kick-started the toy business that would keep Scotty’s interest for years. In 1993, Scotty opened the Wee Toy Shop in Sherman Oaks, CA. Unfortunately, the store was destroyed by the Northridge earthquake on January 17, 1994. 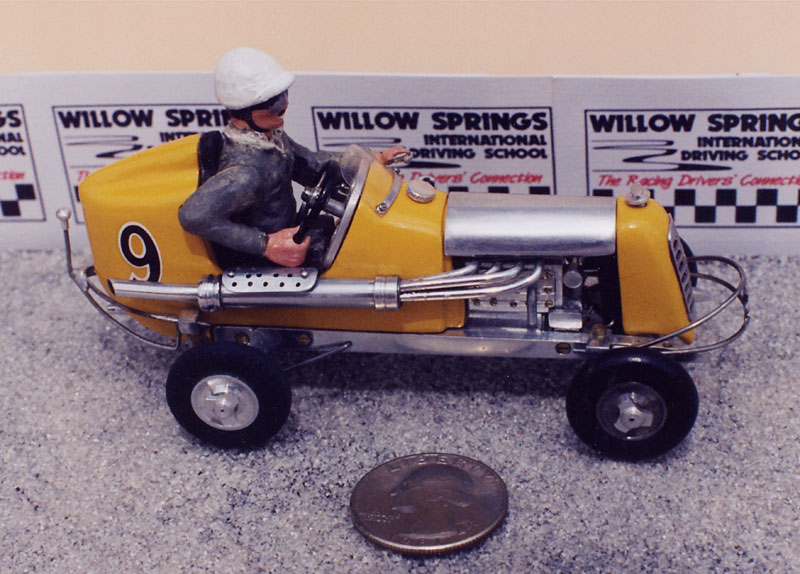 Scotty’s prize-winning model from the 1997 Machinist’s Challenge Contest—a quarter-midget style race car powered by CO2. This car exhibits more engine detail than his previous work, along with a diorama backdrop of a dirt track for added effect. The extra details in this project lend themselves to the sense of fun that is apparent in almost all of Scotty’s work. 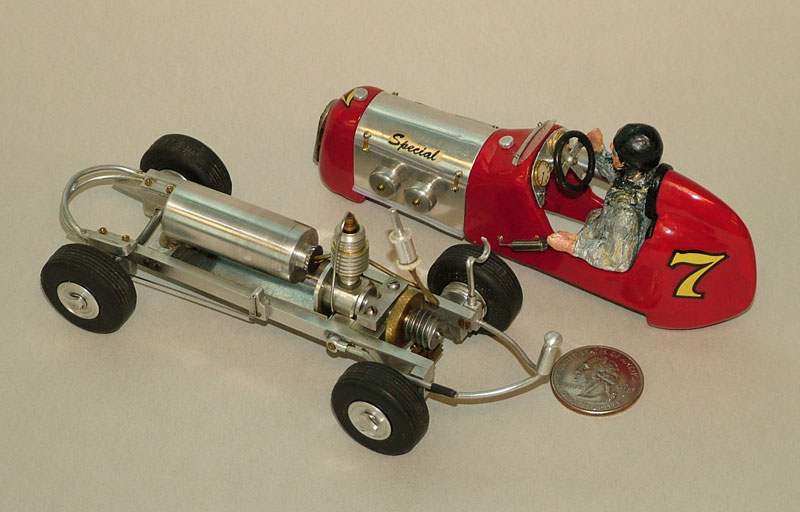 Scotty’s first CO2-powered race car, #7, which won first place in the 1996 Machinist’s Challenge. A small cylinder is charged with CO2 to power the geared rear end. Scotty carved both the body and the driver by hand, too.

Throughout the course of his career, Scotty utilized his mechanical engineering skills to create a variety of toys that actually function. Scotty’s micromachining began with the purchase of a Sherline lathe and mill. The Sherline Machinist’s Challenge, which is held at the North American Model Engineering Society Expo, has always been open to worldwide entries. The competition was irresistible for Scotty. He proceeded to win third place in 1993, then both first and fifth place in 1994, and then first place again in 1995, 1996, and 1997. Additionally, Scotty won another award at the 1997 Pacific Rim International Model Engineering Exhibition, in the “Steam Engines, Marine” category. 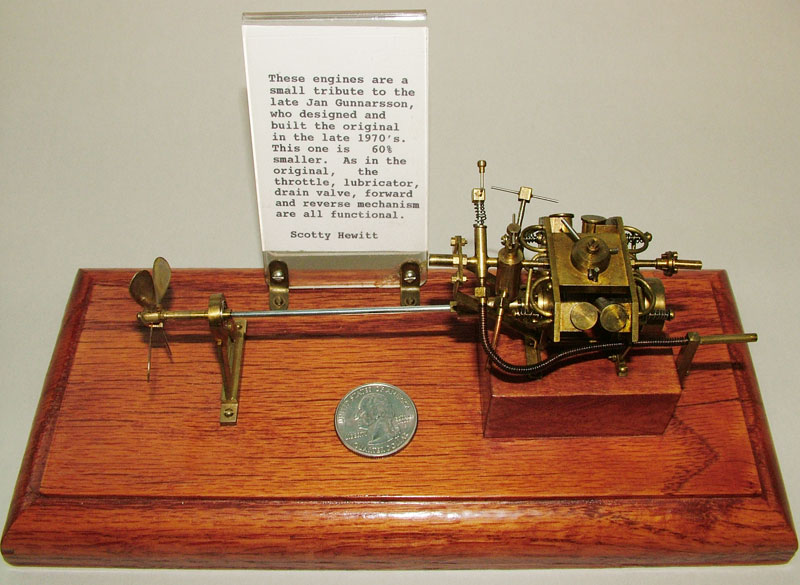 Scotty didn’t just build tiny race cars—this miniature V-4 marine steam engine shows a wealth of detail in a compact size. The model was scaled down to 60% of the full-size engine. Scotty modeled it after an engine designed by Jan Gunnarsson in the 1970’s.