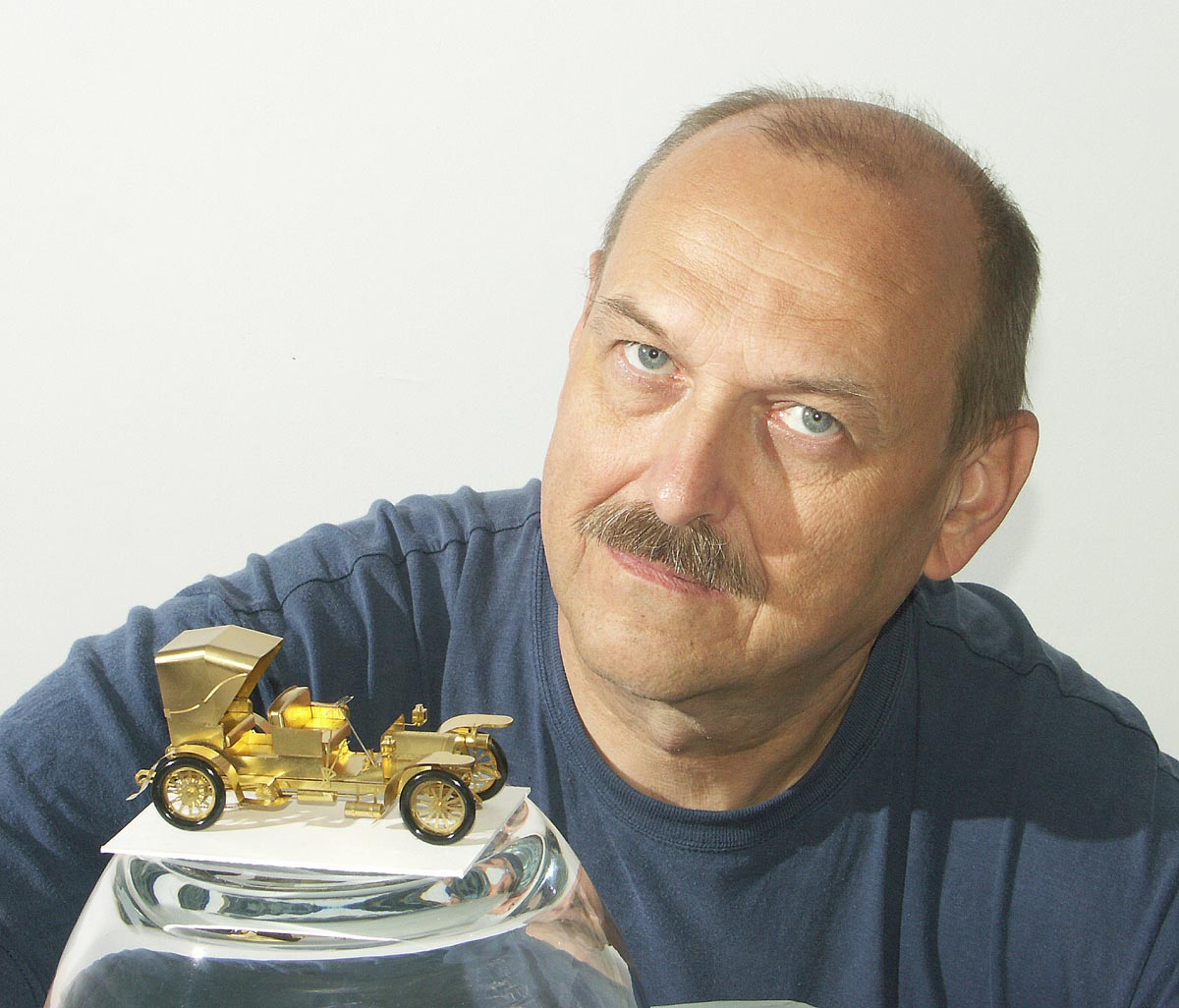 Szymon Klimek of Poznań, Poland is seen with one of his artistic and delicate brass models.

Blurring the Lines Between Model Making, Jewelry, and Art

It’s difficult to classify the work of Szymon Klimek. Ultimately, we chose to include it in our “machining and metalworking as art” section; however, the model engineering, model making, and even the mechanical jewelry sections would have been appropriate as well. Szymon’s solar-powered steam engines could certainly be displayed at any model engineering show. But what about his tiny brass hat boxes, or his small wrapped gift boxes, or even the flowers in his tiny coaches? Szymon has combined art and model engineering in a unique blend to produce artistic pieces that defy categorization.

Much of this intricate work can be seen on Szymon’s personal website. Additionally, there are video links near the bottom of this page that show some of Szymon’s tiny engines in operation.

Szymon (pronounced Simon) Klimek was born in Poznań, Poland in 1954, to a family blessed with artistic abilities. He went on to achieve a Master of Science degree in engineering, and noted that he always had good manual skills. Szymon was familiar with how to work with thin sheet metal, and decided in 2004 to build a small model locomotive with a coal wagon (tender). The model has a total length of 80 mm. (It can be seen below). From there, Szymon went on to build miniatures with other themes, including gift boxes with floral motifs, cars, stationary steam engines, and locomotives. By 2009, he had already completed over 100 miniatures.

Szymon noted that the hardest part of his process is finding or making the drawings for the original designs. He doesn’t work to any set scale. The eventual presentation is often inside of a glass goblet, which helps to determine the scale of the objects being made. Szymon then draws the shapes from a given set of plans onto sheet brass—anywhere from 0.1 mm to 0.08 mm thick—and cuts them out. He manually forms the shapes (no fancy machine tools), and then glues them together before applying a clear lacquer finish. The assembly process is time-consuming, and requires a great deal of precision and focus. 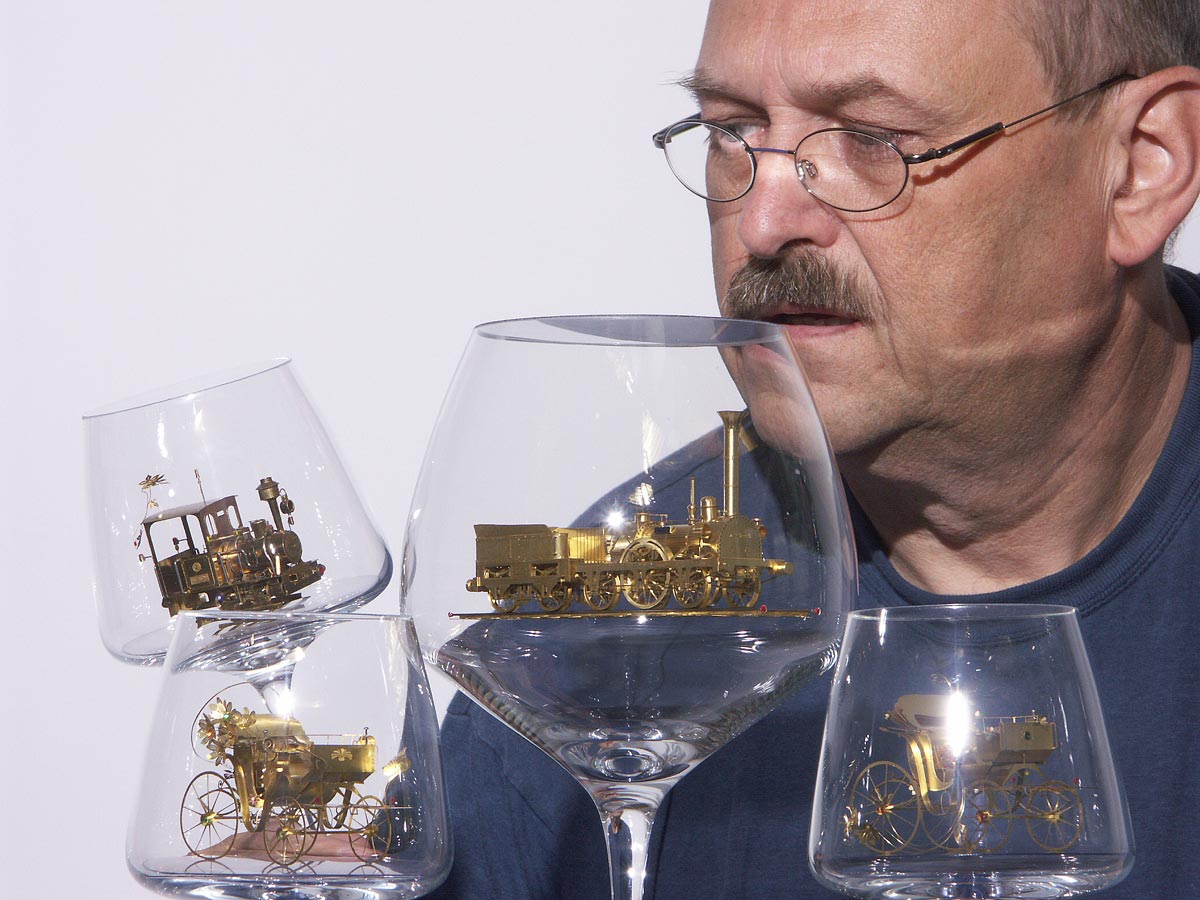 Glass goblets serve to display and protect these delicate works of art, while also lending a sense of richness and class. Pictured here are some miniature trains and coaches. 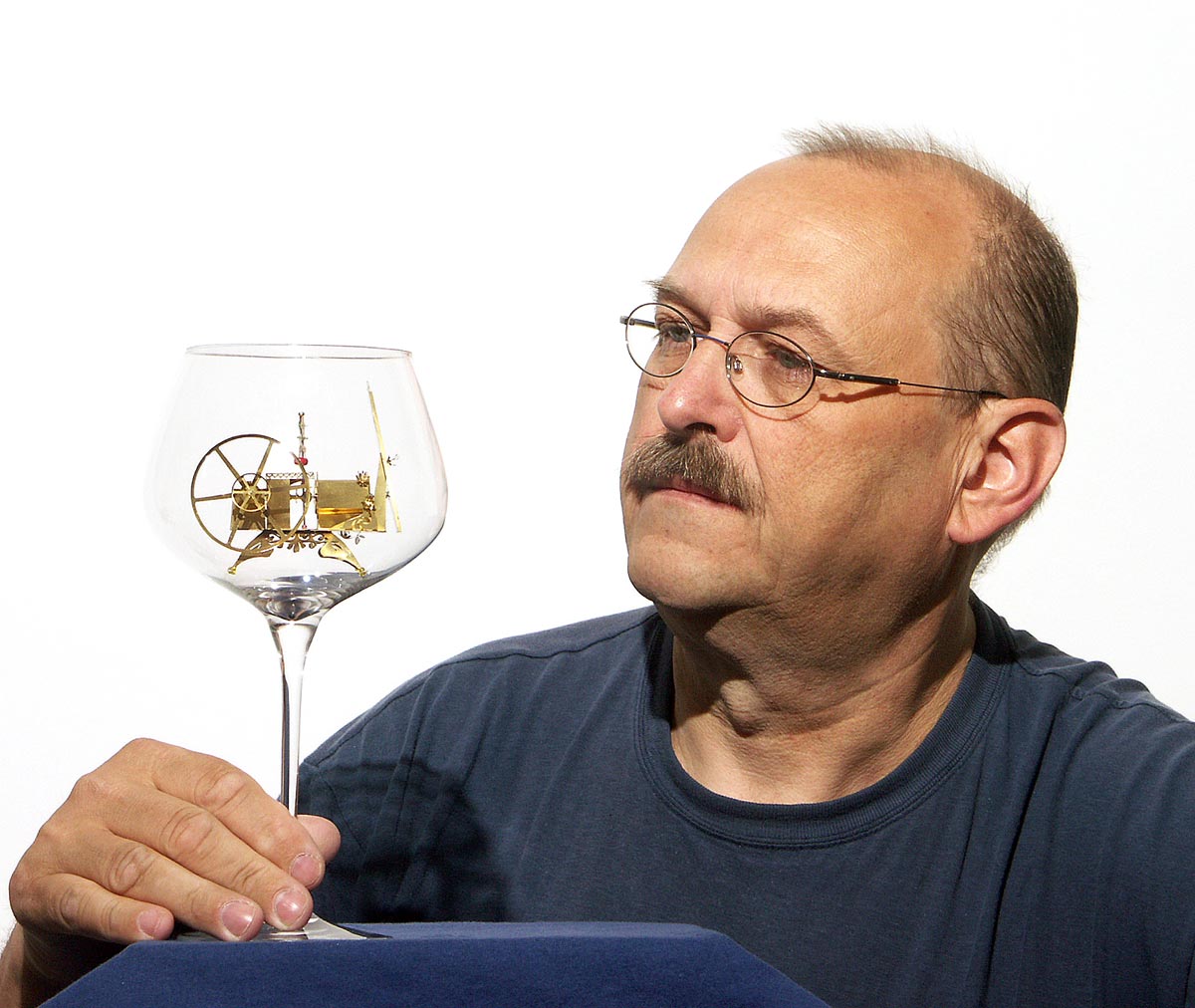 Szymon inspects one of his miniature solar-powered engines.

If Szymon feels that the basic design needs to be livened up, he adds elements like floral motifs, ribbons, or glittering zircons (Swarovski). Because of the delicate nature of these models, he encloses them in glass goblets, usually about 25 cm high. Szymon’s more recent steam engine creations are run by small electric motors powered by solar cells, adding the element of motion.

At the time of this writing, Szymon had remained non-commercial. However, that changed when he launched his own website featuring a gallery of his miniatures. He planned to offer these and other creations for sale. The decorative miniatures in goblets can serve to decorate elegant interiors, and are quite the conversation starters. 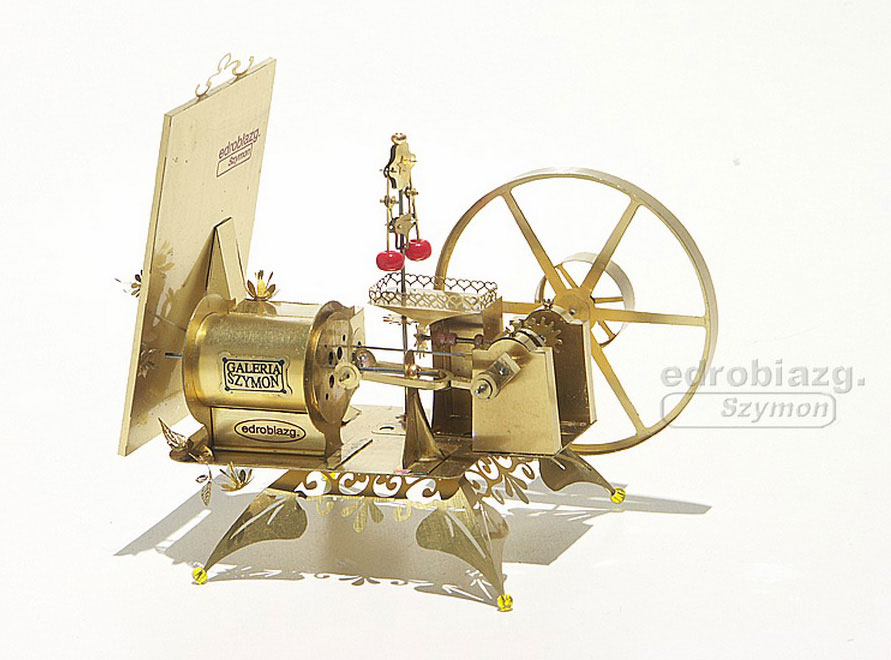 One of Szymon’s tiny solar-powered steam engines sits atop a fanciful and ornate frame. The brass engine is fully functional, and powered by the small solar panel on the left. It begs the question: is this model engineering, art, or both? 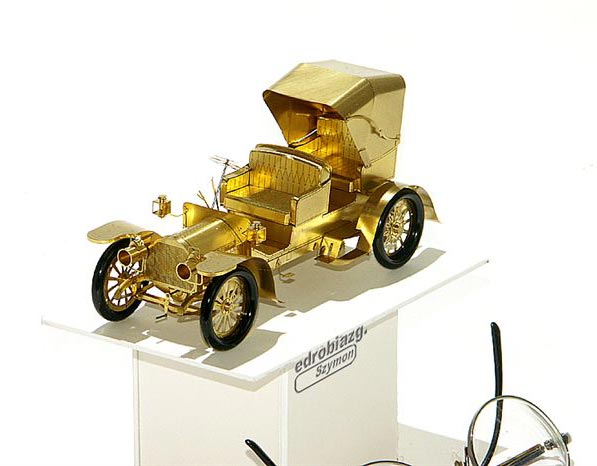 Along with his personal website, Szymon has uploaded several videos on YouTube showing his work in action, or on turntables so you can see every side. All of the videos can be found on Szymon’s YouTube page, but we’ve also highlighted several here: 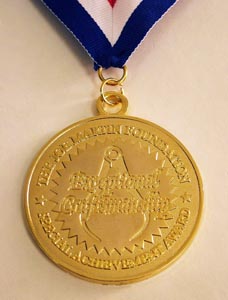 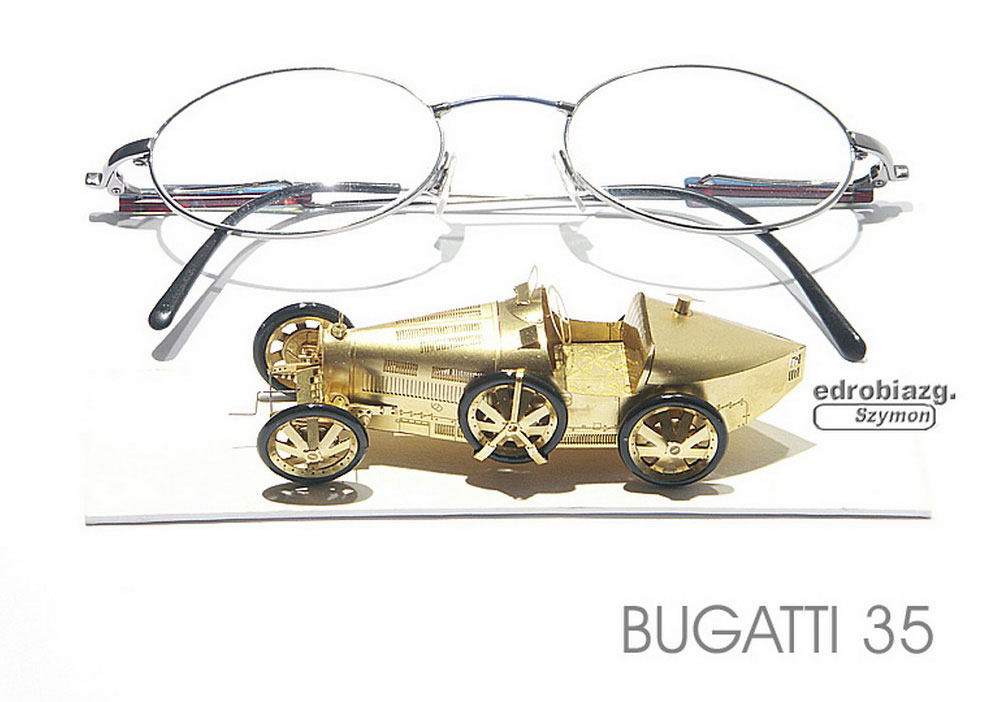 Szymon’s miniature brass Bugatti is dwarfed by a pair of glasses.

In September of 2009, Szymon Klimek was presented with a Lifetime Achievement Award from the Joe Martin Foundation. This award is a recognition of the unique and artistic nature of the work that Szymon has produced. He received an award certificate, an engraved gold medallion, and a check for $500.00.

In November of 2009, Szymon Klimek shipped some exemplary pieces of his finest work as a donation to the Miniature Engineering Craftsmanship Museum. The first miniature, an Adler 2-2-2 locomotive, comes from the early days of steam, and pulled Germany’s first commercial trains. Designed in 1835 by Stephenson in England, the train was in service for 20 years before eventually being replaced by more modern locomotives. A replica of the engine was being restored in Germany for the DB Museum in Nuremberg. The following year, Szymon also donated a second miniature of a Victorian steam engine for display at the Craftsmanship Museum. Both models are pictured below. 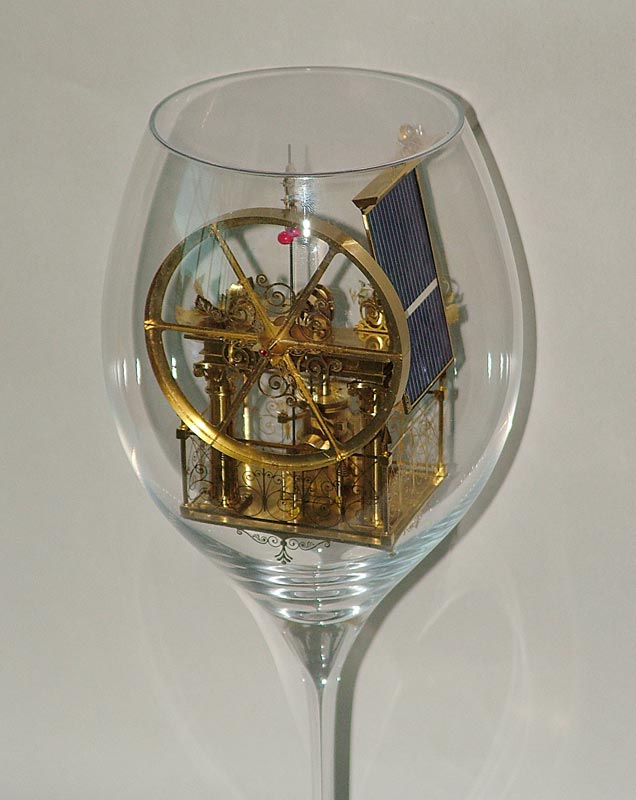 The second sculpture that Szymon donated to the Craftsmanship Museum. This piece is named “Susi,” after the tiny brass snail of the same name sitting atop the solar panel. This ornate Victorian steam engine actually runs, although not on steam. The solar panel powers the engine via a hidden electric motor—using only the light of a 30-watt bulb—to run inside of its sealed glass goblet. 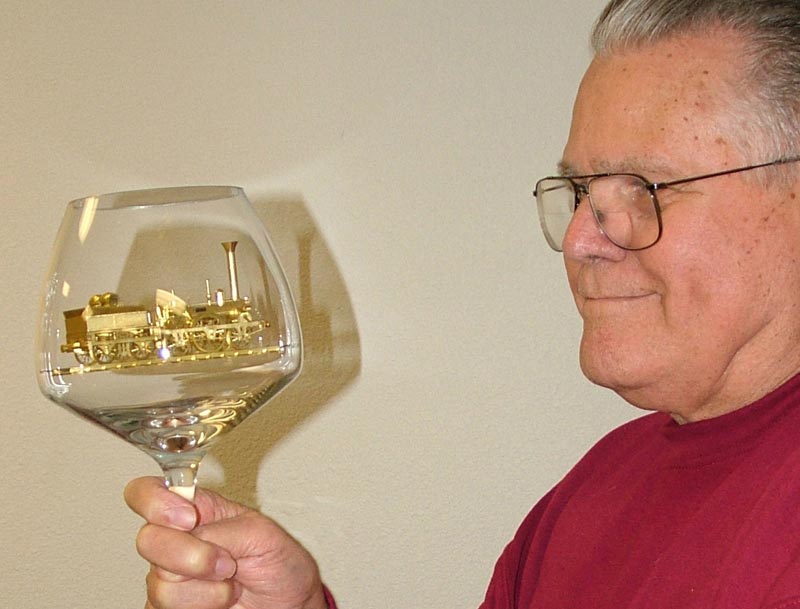 Joe Martin taking a first look at the newly donated Adler locomotive model, built by Szymon Klimek. Mr. Martin selected Szymon for the Lifetime Achievement Award after seeing photos of his work; however, after seeing an actual example in person, Joe was sure he made the right choice. Photos do not do justice to the quality and delicacy of these superb models.