Below you can view more photos of Steve’s remarkable craftsmanship. Click on images to enlarge. All engraved designs are copyrighted by Steve Lindsay, and may not be copied or reproduced in any form without written permission. 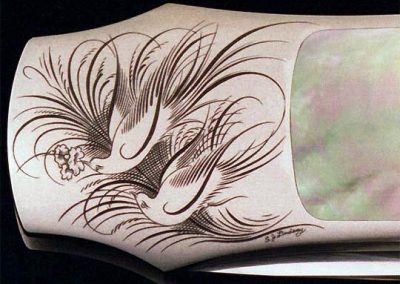 This folding knife was made by Steve Hoel, and engraved by Steve Lindsay. The handle has lack lip pearl inlays.

A calligraphy type line engraving style was used on this knife. 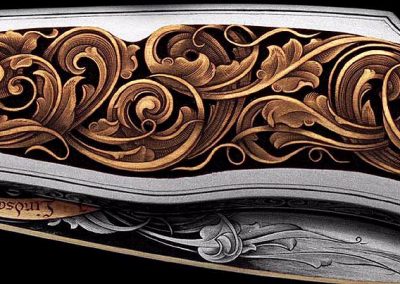 A closer look at the first knife that Steve not only engraved, but crafted in full. 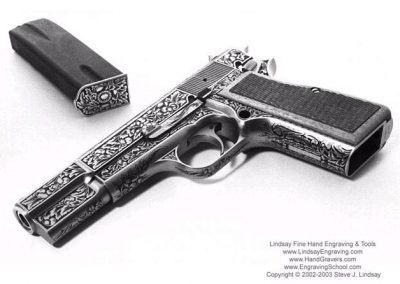 This handgun was featured on the cover of the January, 1987 issue of Guns Magazine. 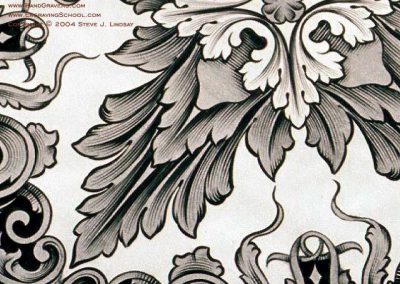 This close-up of Steve’s work shows the perfection of line thickness, spacing, and design that makes his craftsmanship stand out. 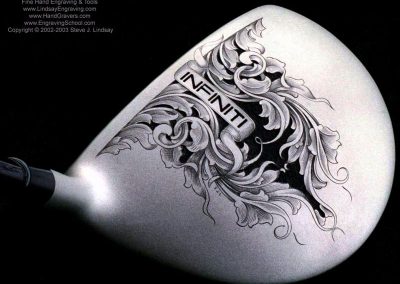 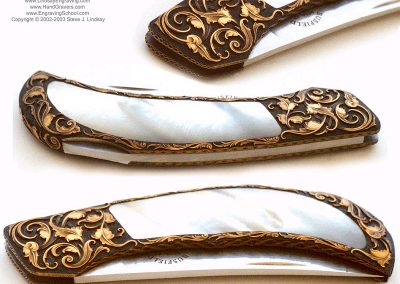 A folder made by Jack Busfield from 416 stainless. Steve covered 100% of the stainless with raised, sculptured 24K gold inlays. The handle is white pearl. 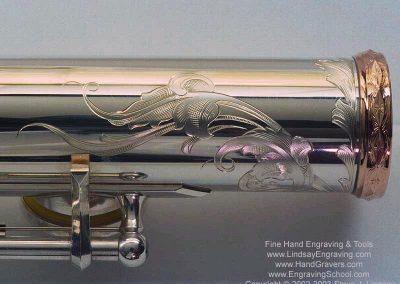 A silver flute with engraved design. 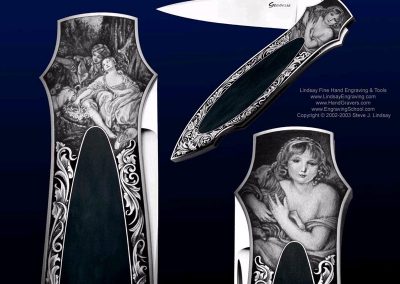 This knife was made by Rick Genovese and engraved by Steve Lindsay. In addition to graphic patterns and animals, people are sometimes the subject of Steve’s engravings. 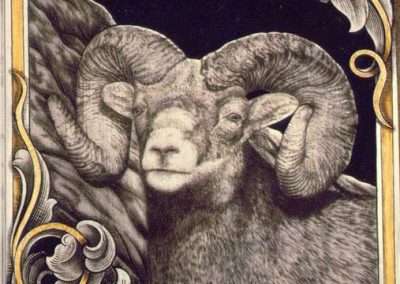 This big horn sheep shows the expertise of Steve’s art and engraving technique when it comes to animals. 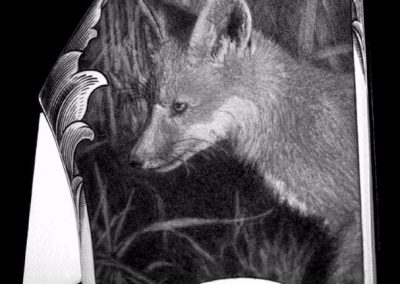 Another folder knife made by Hoel and engraved by Steve Lindsay. This one has apple green jade handle inlays. The fox scene is bulino engraving, and the scroll is banknote style line engraving. 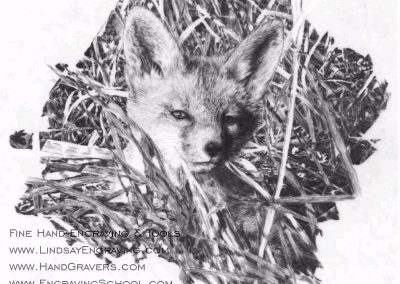 This drawing of a fox was also done by Steve. The artistic quality of his engraving work is based on his ability to produce expert designs from his own artwork. 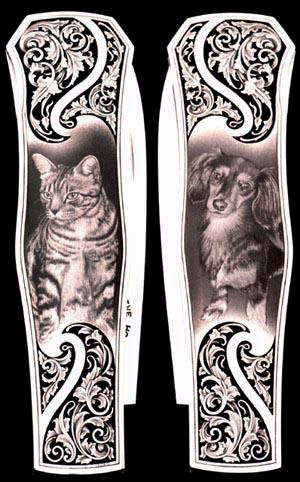 Another all metal folder from Mr. Hoel. Steve Lindsay made the scroll designs with banknote engraving. 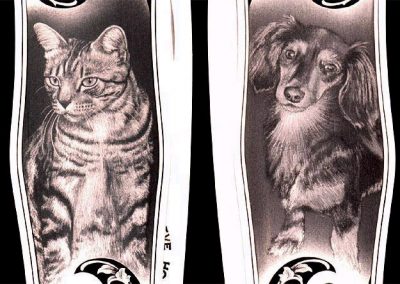 The dog and cat scenes are bulino stipple engraved. 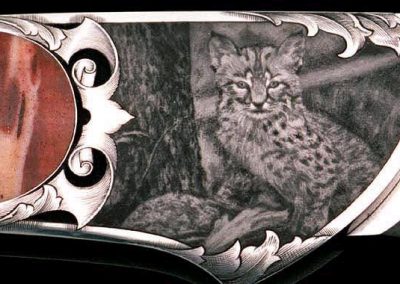 This Hoel folder has stone handle inlays. The fawn and bobcat kitten scenes are bulino engraving by Steve.

Lindsay made the scroll designs in banknote line engraving. 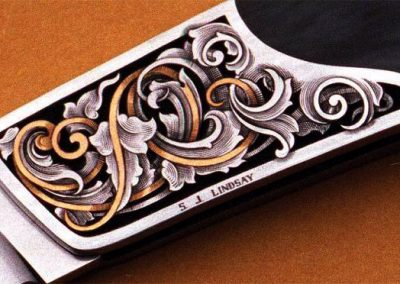 This folder also has jade handle inlays by Steve, along with bankroll engraving on the scroll. 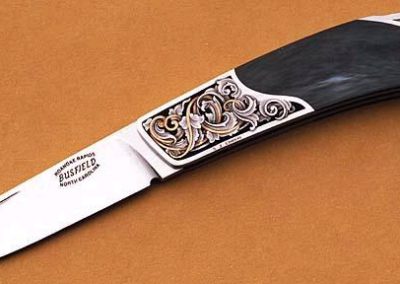 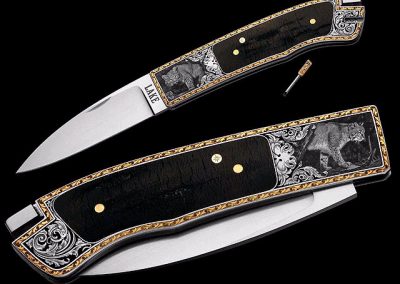 This folder was made by Ron Lake and engraved by Steve Lindsay. Notice the small screwdriver, which is normally hidden in the butt of the knife. 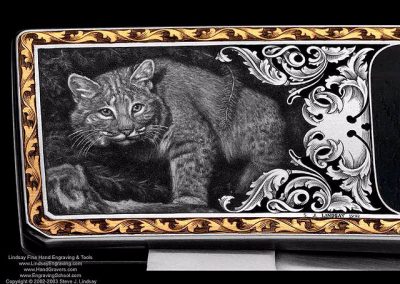 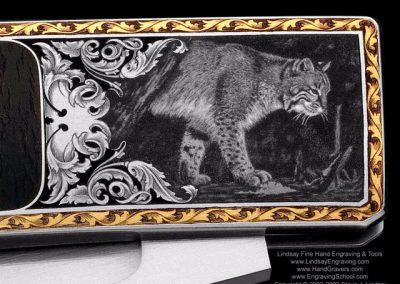 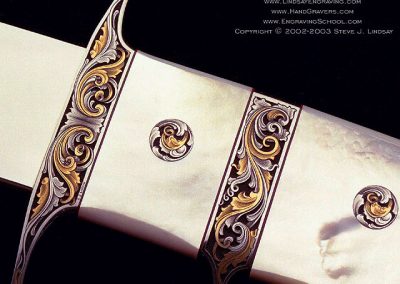 This knife was made by Steve Johnson and engraved by Steve Lindsay. 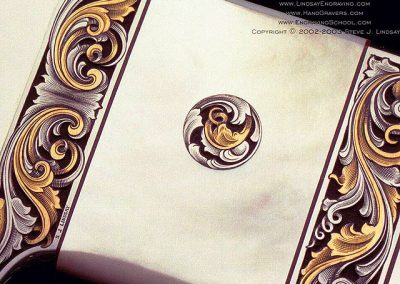 The knife has a banknote scroll design. 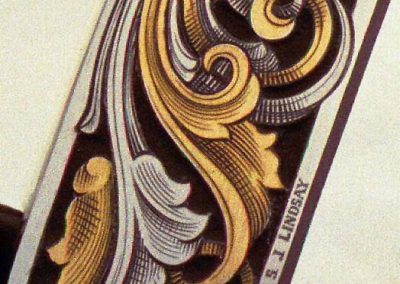 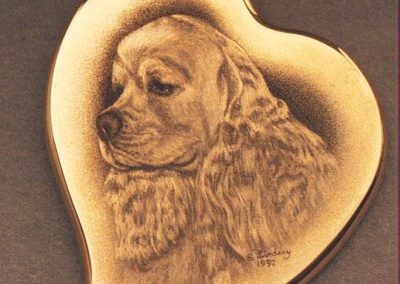 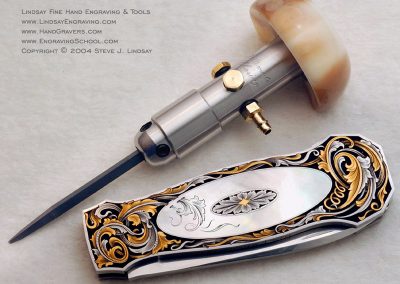 One of Steve’s custom AirGravers sits next to a custom engraved knife. Notice the engraving on the graver, too.