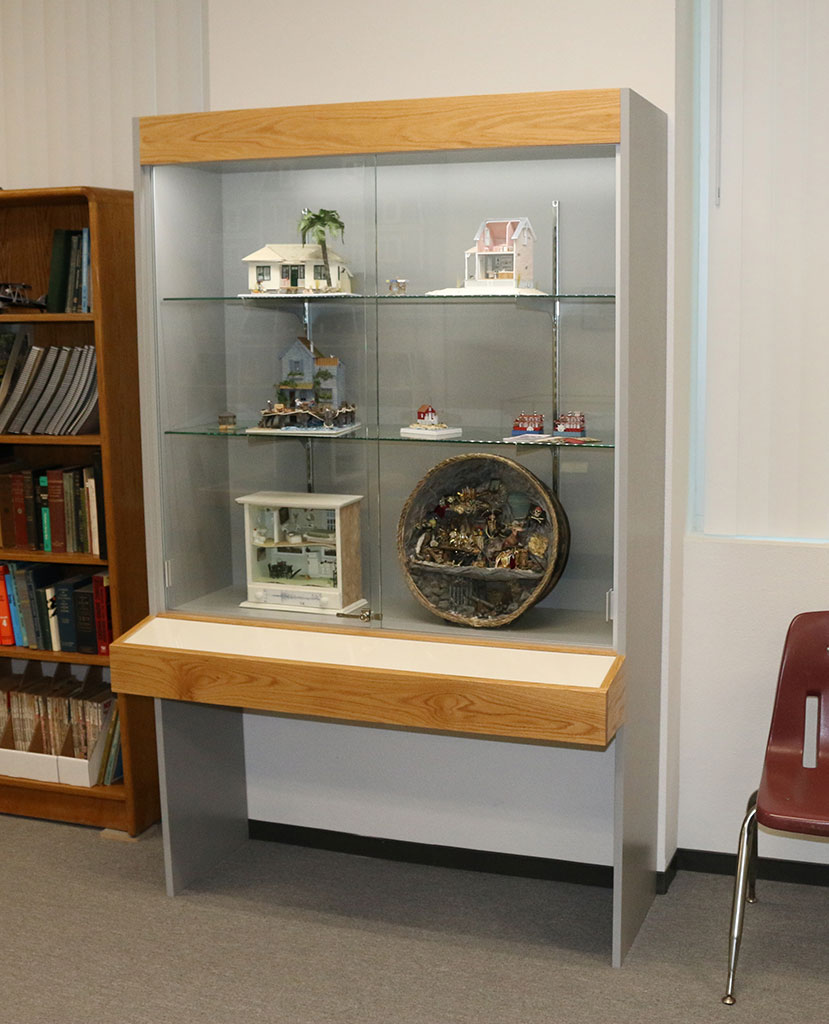 A selection of miniature houses and rooms built by SDMC members.

The San Diego Miniature Crafters (SDMC) organization consists of members who devote their time and artistry to creating miniatures. The scale of these miniatures can range anywhere from 1/144 to 1/12. Some models are complete structures, like dollhouses, while others are single rooms built with a theme or story. There are also individual pieces of furniture or other tiny items built to scale. The members of SDMC attend meetings as well as local and national conventions, often taking part in seminars and classes on miniature making techniques. While the group regularly puts on displays of their own, several miniature makers and their remarkable projects are featured here. The level of detail in these miniature creations is truly astounding.

Read a little more about some of the individual SDMC modelers, and how they got involved with miniatures. Note that this is not a complete list of SDMC members. 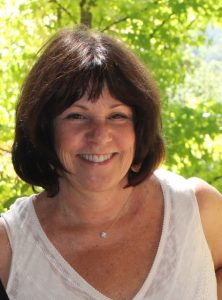 Debi has built four of the displays featured in this article. Her pieces are titled, “Les Chocolats,” “Decisions, Decisions,” “Bones and Booty,” and “Who let the dogs in?” Debi also helped coordinate the displays on this page with other group members. 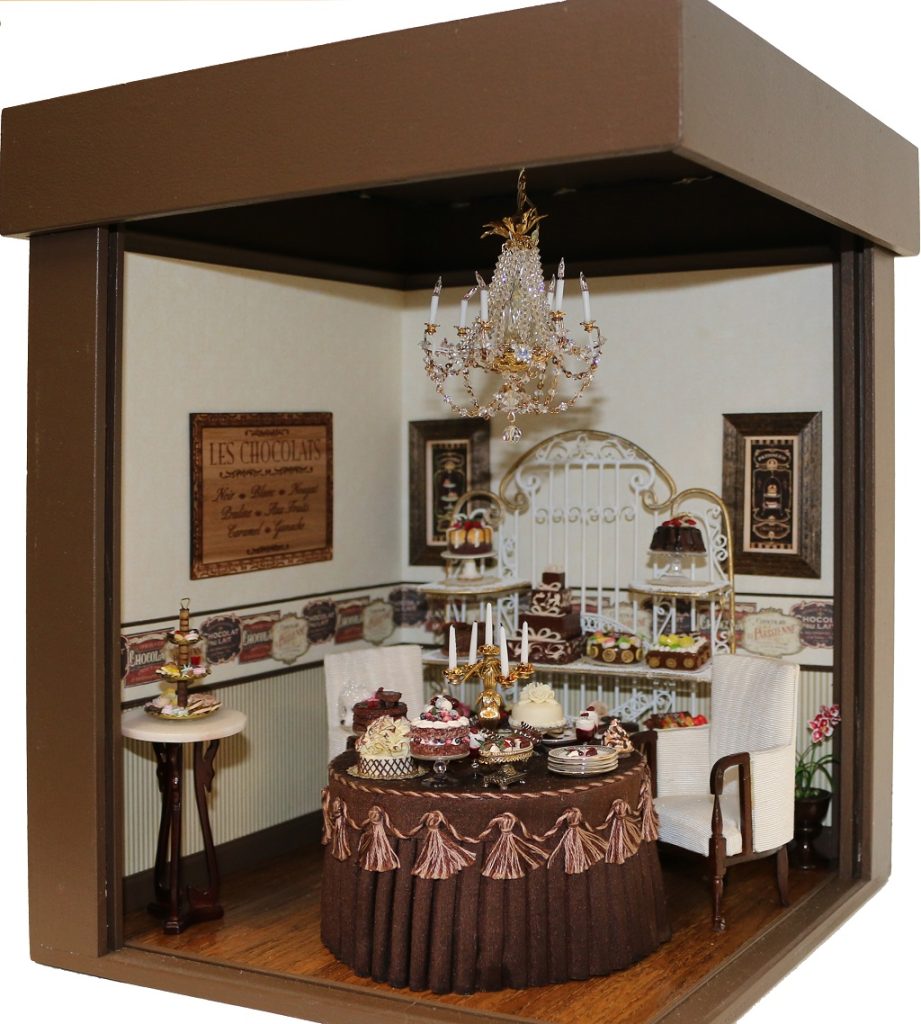 This miniature chocolate shop scene titled, “Les Chocolats” was crafted by Debi Cerone. It seemed like the best way to represent her years of collecting chocolate goodies. 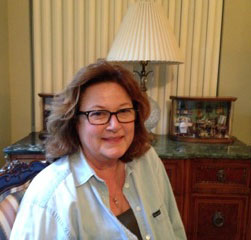 San Diego native Leslie Hopwood has been making and collecting miniatures since childhood. Having attended most of San Diego Miniature Crafters’ 41 annual shows, she finally joined the club in 2006. 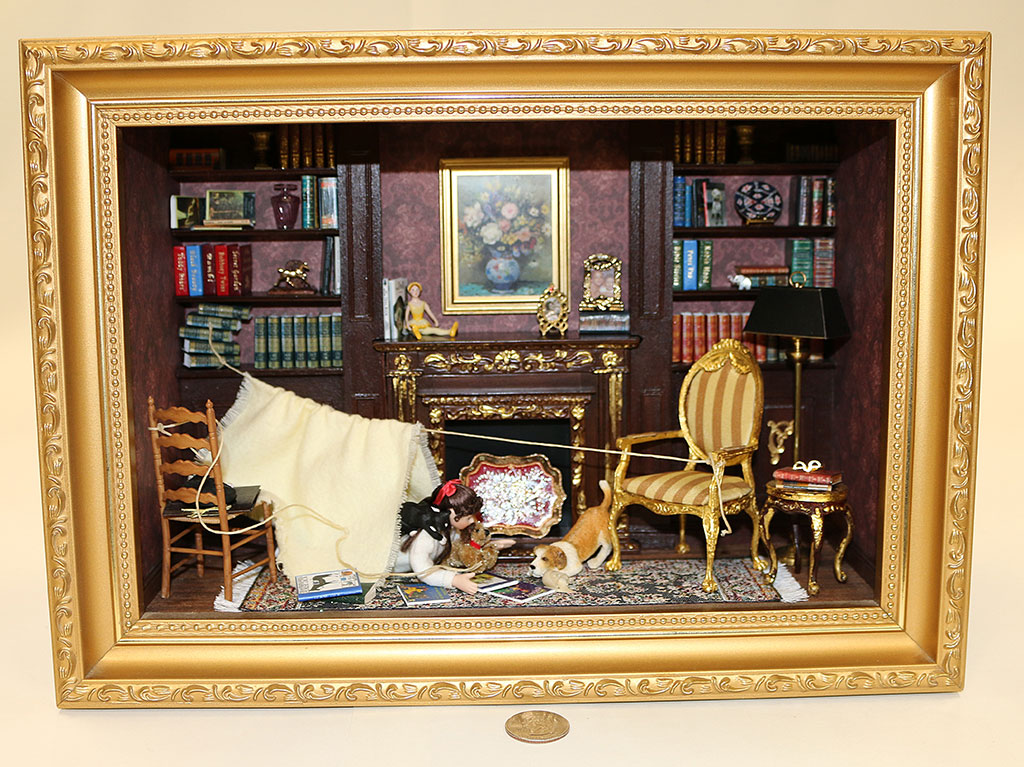 Leslie Hopwood built this miniature room as part of a club project to build a library in a framed box. This 1/12 scale room is titled, “A Place for Picture Storybooks.” The tiny library was inspired by Leslie’s family, and fond memories of rainy days with tent building and reading. 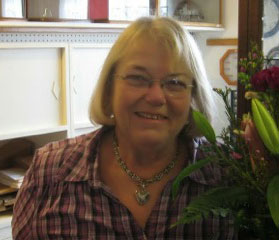 Michael’s parents were skilled artists who encouraged her creativity as soon as she could hold a crayon. She has been learning the art of miniatures over the past 40 years. Currently, she has a class of 30 children who meet at her shop, “Ms. Peggie’s Place,” to learn skills no longer covered in public schools. Her need to pass on her mini-making knowledge is joyfully fulfilled each time she sits with her students. 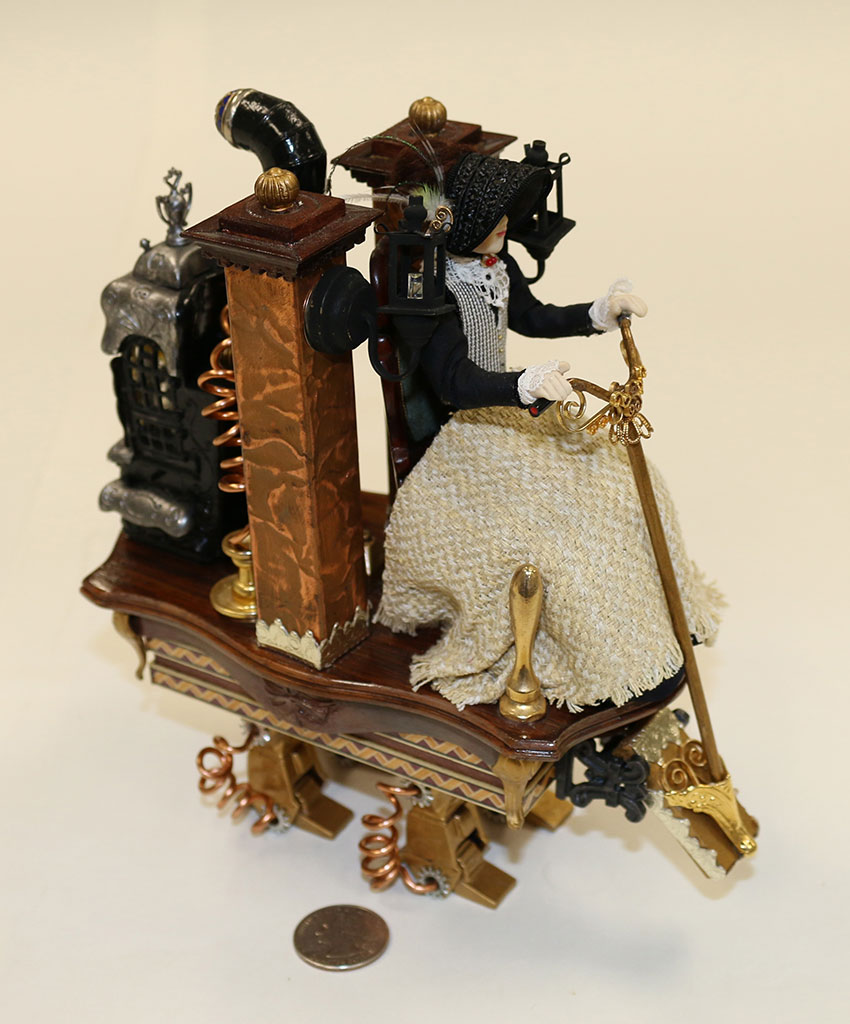 This 1/12 scale miniature titled, “People Mover” is from the collection of Michael Sue Nanos. The steampunk movement imagines a Victorian age with fabulous mechanical contraptions powered by steam. Throw in some Jules Verne and there you have it. 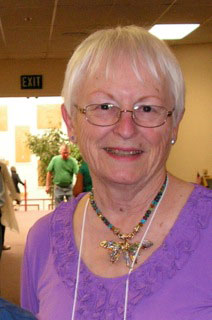 Growing up in San Diego, Jackie Hoefert was always interested in tiny things. She joined the San Diego Miniature Crafters in 1997, and began as a one-inch scale miniaturist. However, she soon began working at a tiny 1/4”:1’ scale. 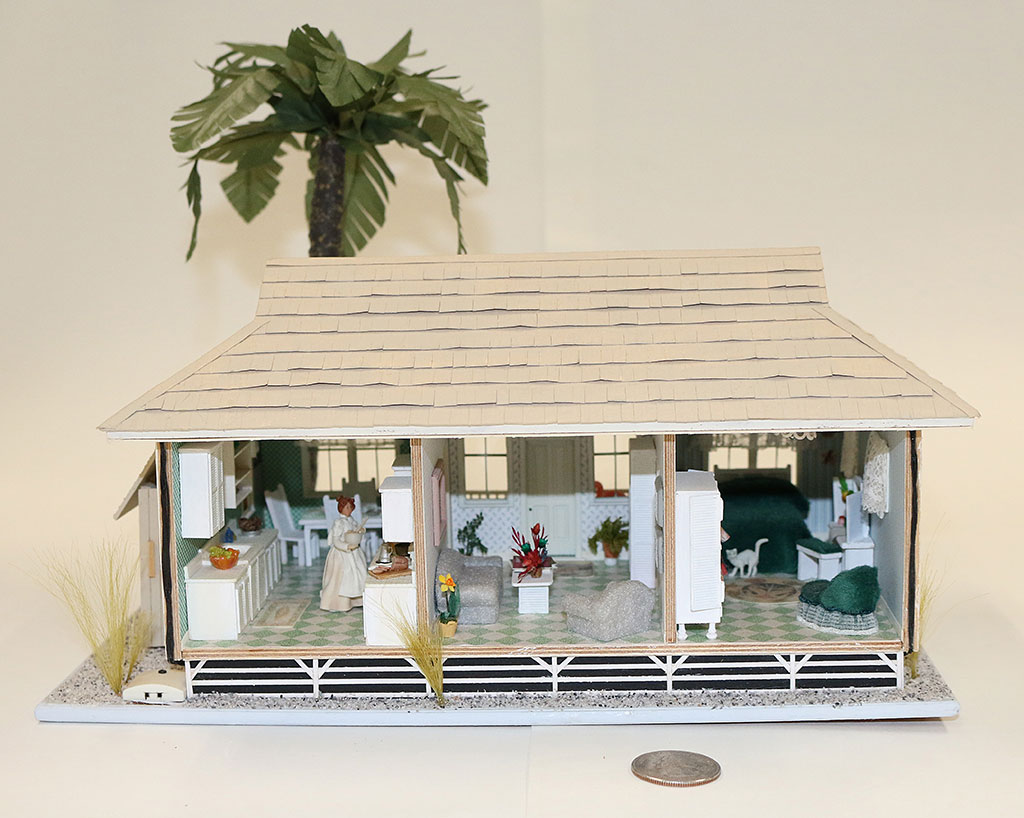 Jackie Hoefert’s miniature resort home, dubbed, “Florida House,” has a wooden exterior and paper shingles. The home was built at a scale of 1/4”:1’. The tiny structure is open in the back to reveal interior detail. 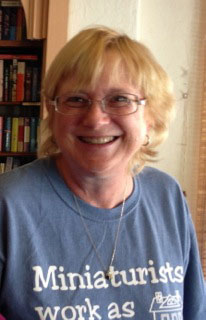 As a child, Peggy’s mother brought home new dresses in large boxes. She would cut up the top of the boxes to build a house plan in the bottom. Peggy broke up other toys to make things for her houses. Little did she know that there was an entire craft world out there making things in small scale!

Thirty years later, in 1983, Peggy found a series of classes being offered at Michael’s craft store. People in the class started talking about clubs and a national organization (now international), and Peggy was hooked. In miniature, many skills are required—wood cutting, painting, decorating, etc.

Peggy joined San Diego Miniature Crafters (SDMC) after she retired in 2012. She became the Southern California state representative for the National Association of Miniature Enthusiasts (NAME) in July, 2015. 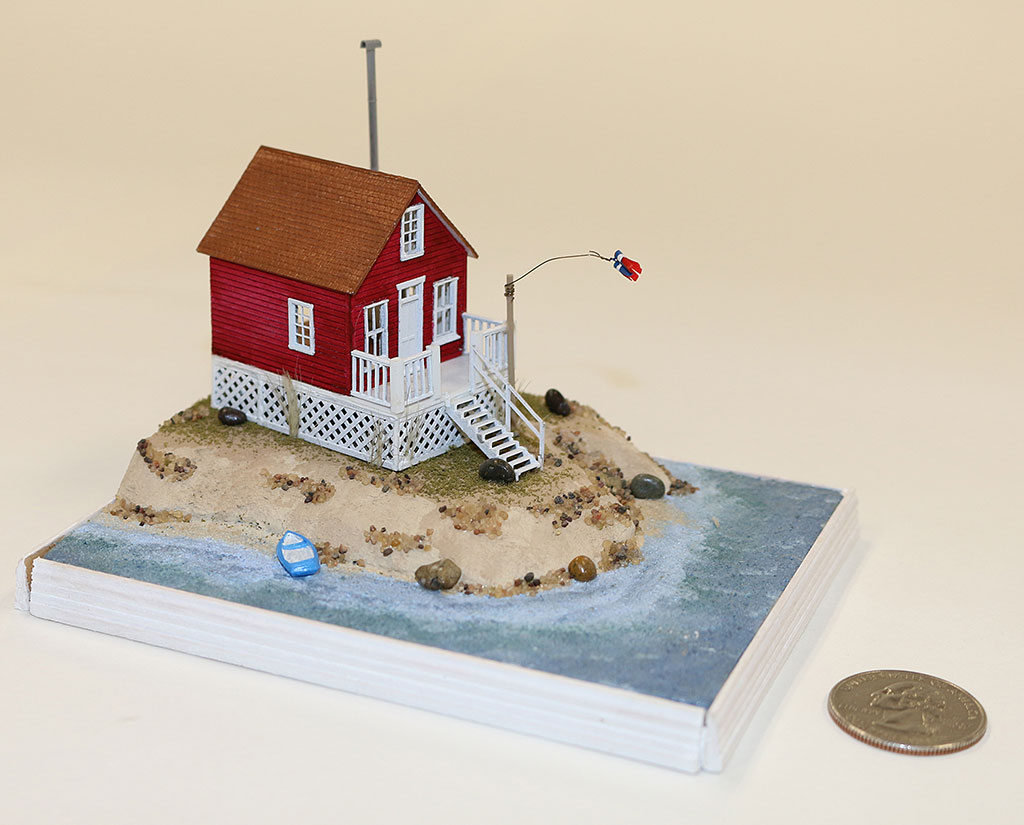 Peggy Boggeln’s miniature “Beach House” was built at an incredibly small scale of 1/144. The little beach house was completed in 2008. The building process started out as a Grandt Line kit, with Peggy supplying the details and adding an ocean. 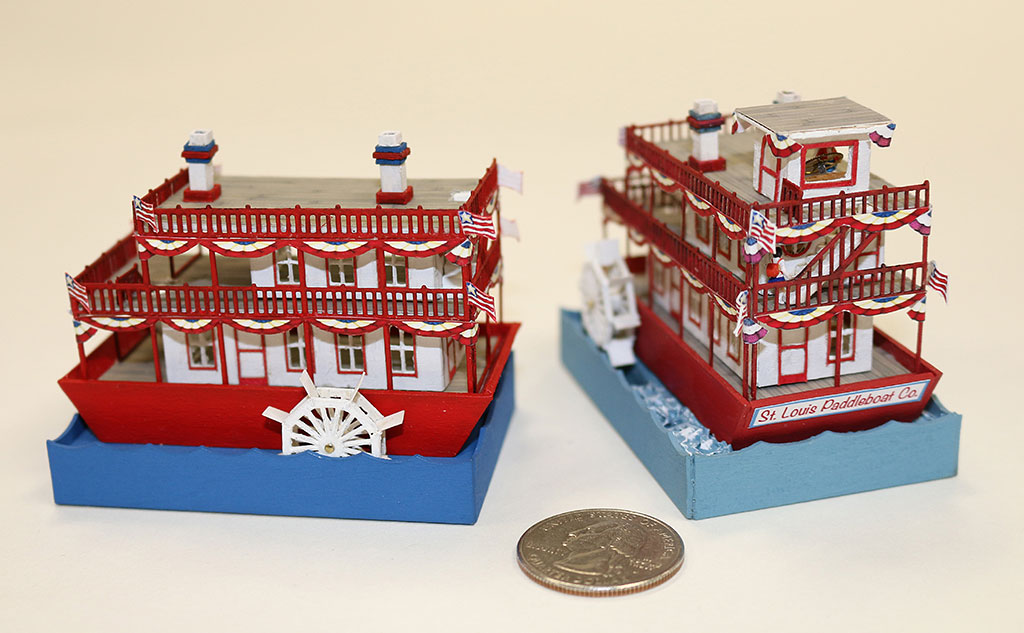 These 1/288 scale Paddlewheel Boats were made by Peggy Boggeln and Jackie Hoefert. 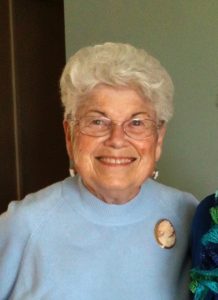 Although born in Chicago, Anita claims San Diego as her home, having moved here as a young girl. One of Anita’s most treasured items is a small family of tiny Asian dolls she made over 70 years ago.

Anita began working on miniatures again after she started taking her daughter to the Doll and Toy Emporium in Old Town San Diego. She has an eye for the delicate, and likes to incorporate things that remind her of family. One of Anita’s dollhouses, built by her and her husband, contains a treasure trove of family memories. Anita’s many room boxes represent the things and people she loves most. 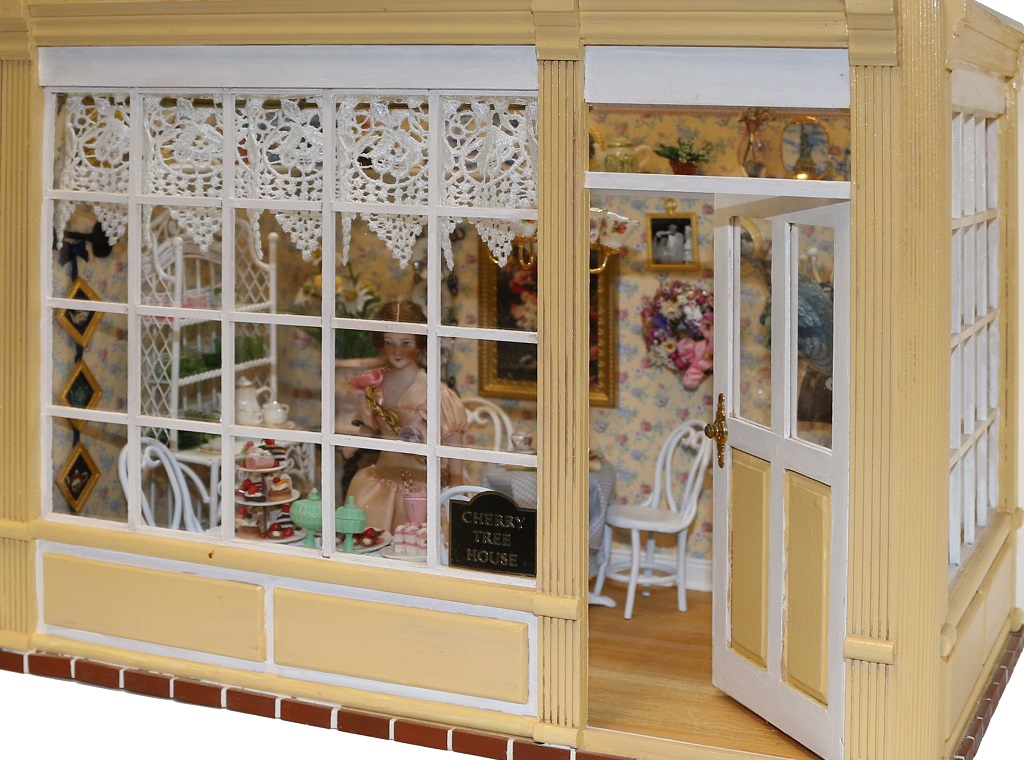 Anita Kirwan titled this miniature, “Cherry Hill House Tea House & Baked Goods by Leona.” At Anita’s house, you don’t simply have a cup of tea—you have tea poured from a lovely teapot, snuggled under a tea cozy. 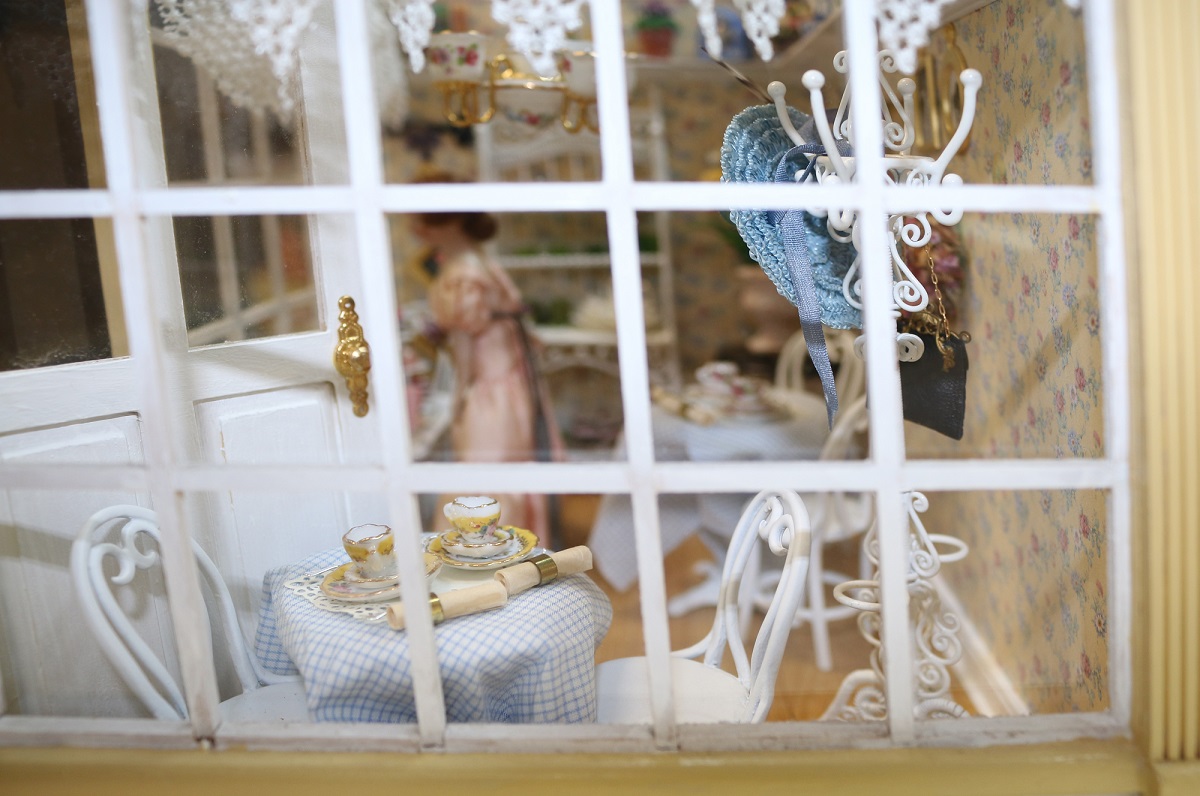 Anita’s miniature shop is filled with memories of delicious desserts baked by her many Italian aunts. 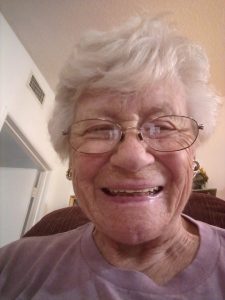 Buff is a Chicago native who came to San Diego via Naples, Italy, and Sugarloaf Key. In Florida, she kept busy as a Naval wife, mother, and owner of a pet monkey! Always imaginative and creative, Buff enjoyed a couple of art classes in college, and later took interior decorating classes for fun. Her work life was very detail oriented, having retired as a technical writer making instruction manuals for computer component assembly.

Buff has unleashed her imagination through her work, which embraces an expressive and often humorous spirit. She is a mentor to many miniaturists, always encouraging original ideas and embracing resourcefulness.

This miniature trailer scene made by Buff Greaney is titled, “Feelin’ Groovy.” Buff’s mini trailer started out as an RV, but with careful attention it was crafted into an airstream with a hand-painted exterior.

The inside of Feelin’ Groovy was created entirely from Buff’s imagination. The cozy interior is filled with handmade items, from woven wicker chairs to lights and bedding. The miniature scene is a timeless invitation to sit, relax, and enjoy what life has too offer! 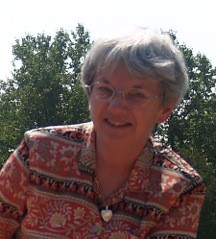 Sheila began working in miniature in the 1980’s, when her husband bought her a dollhouse kit. Sheila’s career life has included fine art, teaching art history, computer game design, animation, and other related interests. Over the years, working on miniatures has allowed Sheila to apply her imagination and creativity to new endeavors. Creating these detailed miniature scenes, along with the many items and figures that bring them to life, continues to be a very satisfying experience for Sheila.

Sheila McKisic has made a few miniature scenes from Alice in Wonderland including, “Mad Hatter’s Tea Party.” For the tea party, all the props and characters were made from scratch. The tree trunk was made from paper mache, the walls are wood surfaced with Sculpey, and the roof was made from fake fur. The figures were modeled, and then body parts were attached with pipe cleaners. They were then painted, wigged, and dressed. Sheila notes that it’s more fun (and forgiving) to make unusual characters than those representative of real people. 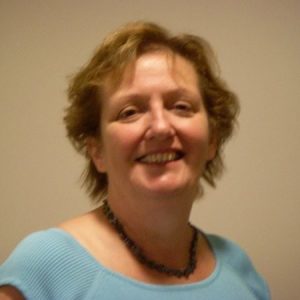 Julia is the artist who conceived of turning a metal Biscotti tin from an antique fair and turning it into an Italian bakery. 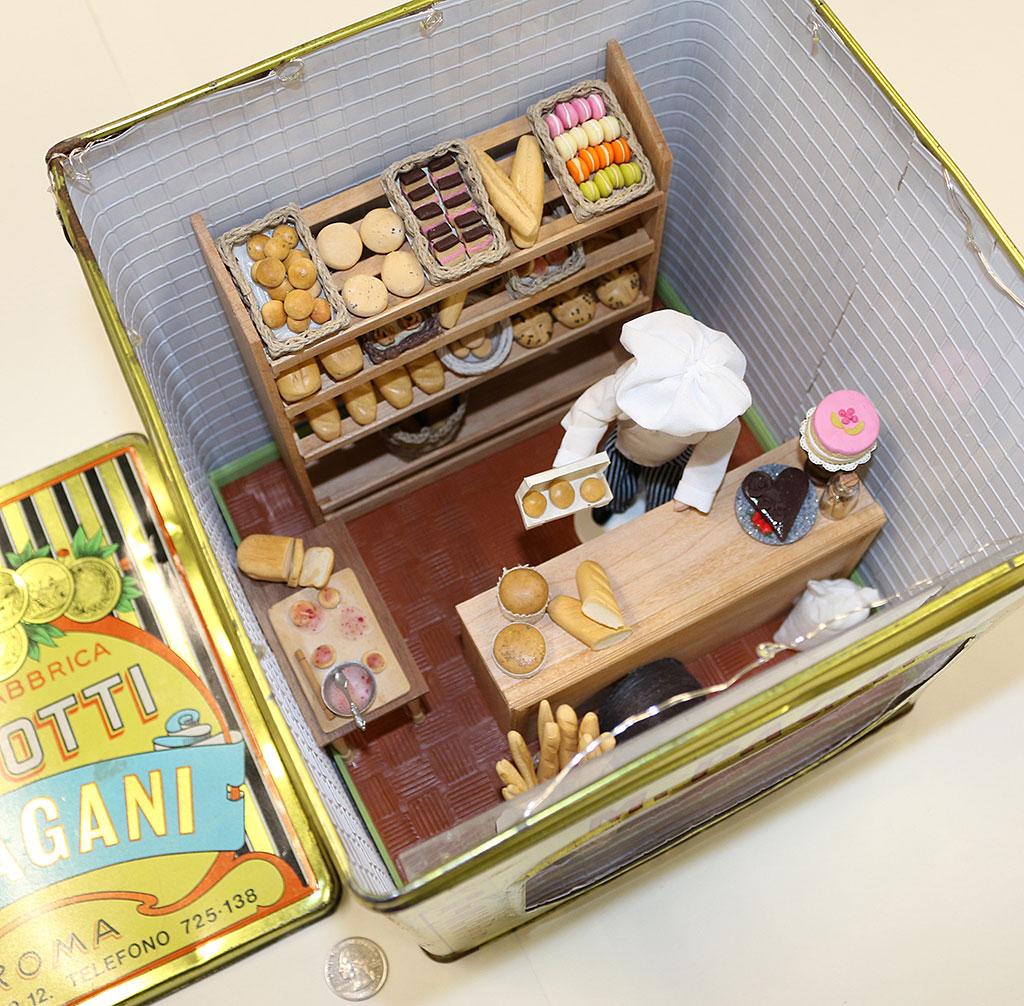 Julia Tollafield built her 1/12 scale “Italian Bakery” inside a vintage biscotti tin, which she found while rummaging around a mid-west antique fair. Everything inside the bakery was made by her, with the exception of the doll, which Julia purchased and dressed. 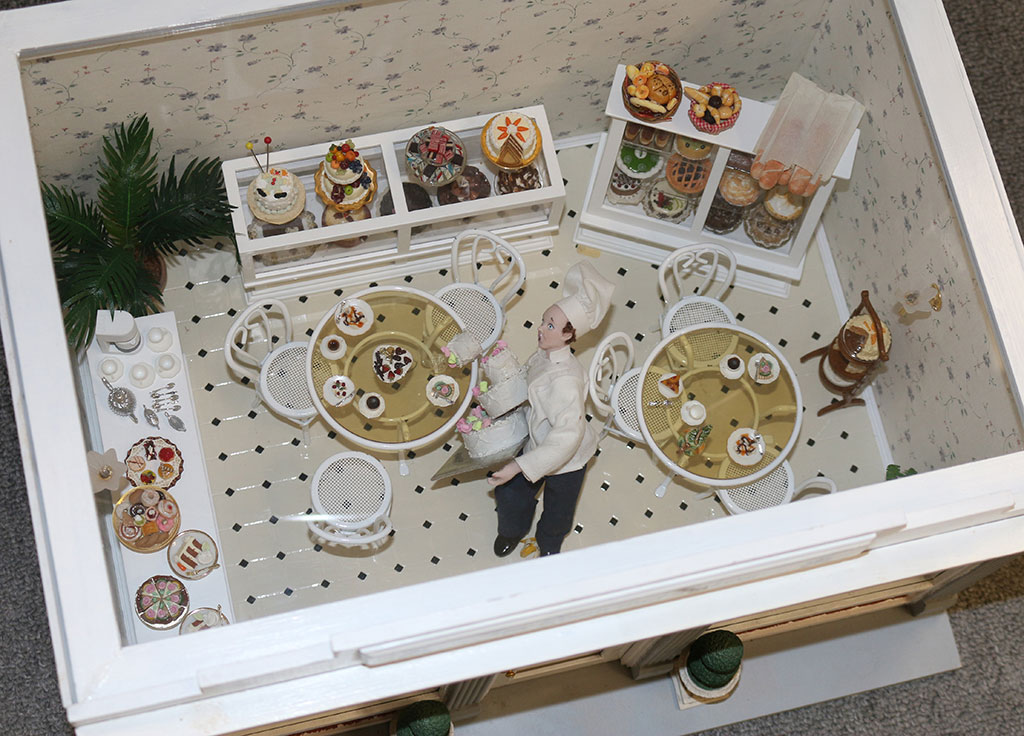 Jeannie Napolitano built her “Tea Room and Bakery” at 1/12 scale. This miniature is an example of crafting with a sense of humor. Handcrafted and dressed, the bakery chef has lost his balance slipping on a banana peel. This chef was sculpted and dressed by doll maker Fern Vasi.

Once a nurse on the Santa Fe Railroad, later working for the Flying Tigers, Coronado resident Jeannie Napolitano has been crafting and collecting miniatures for more than two decades.