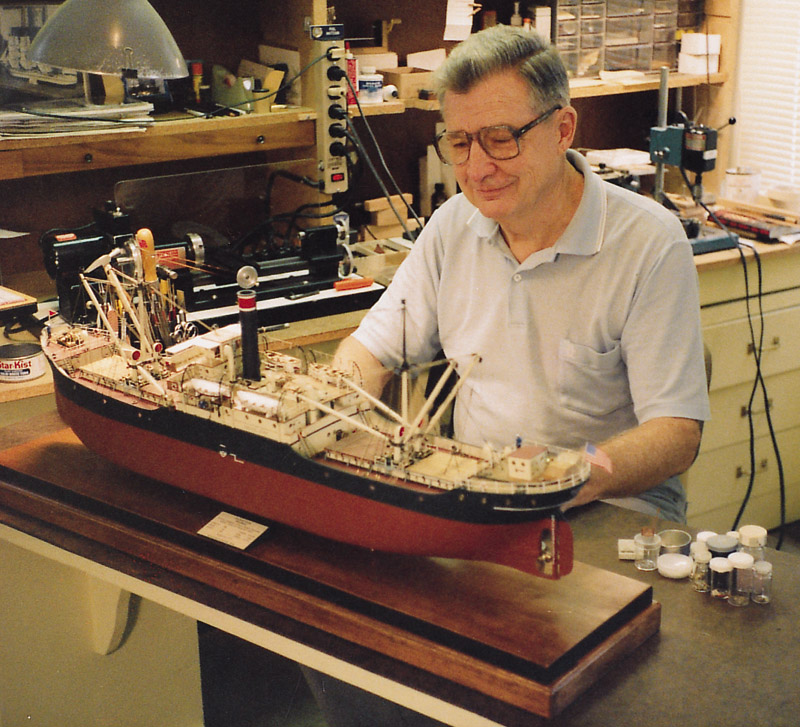 Phil Mattson puts the finishing touches on his model of the Pacific Star tramp steamer. He built the model in his home shop in La Jolla, CA.

Phil Mattson is one of those rare individuals who has taken craftsmanship and living to the next level. He is a true artist and humanitarian. Few people on this earth have impressed me more on either count. My desire to make others aware of Phil’s magnificent work is the reason I decided to give Phil a special recognition award.

The transformation from craftsman to artist is a difficult one, because the craftsman must first master the skills of a tradesman. This step cannot be bypassed, which is not the case for many so-called artists of today.

Artists have the luxury of being able to work with the media of their choice; however, the subject a modeler has chosen to build dictates the media they must work in. This in turn usually requires that more than one skilled trade must be mastered to produce that perfect model. 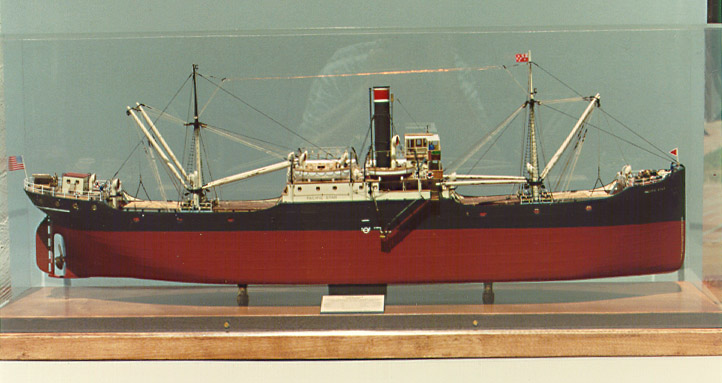 Consider a sculpture of a pleasing shape that the public finds amusing. It could be a row of old Cadillac cars painted white and half buried in the ground, or a curtain across a canyon. The builder of this sculpture is immediately considered an artist, and may go on to find fame and fortune because his or her work is simply different.

If this artist had to get to this level by first being a superb craftsman—who could produce work with craftsmanship close to or equal to that of the great classical artists—before their work could be considered art, it would be a different story.

Exactly when Phil crossed the line between craftsman and artist is difficult to determine. Though somewhat overshadowed by the list of his overall accomplishments, his attention to detail—even on parts that will never be seen in the finished model—is something that strikes people looking at his work.

I remember perfectly crafted canons set in place on his present project of the British warship, Alfred. Most of the 74 canons were down in the bowels of the ship, and only the tip of the barrels could be seen on his completed model—but they were there and perfect in every detail. Phil would consider it “cheating” to take a shortcut.

His “ship builder in a bottle” theme of an old man building a ship in a bottle is a perfect example of craftsmanship taken to the level of art. I found the result similar to a Norman Rockwell painting, but consider the engineering and planning that had to go into creating this masterpiece. The quality of his work speaks for itself. 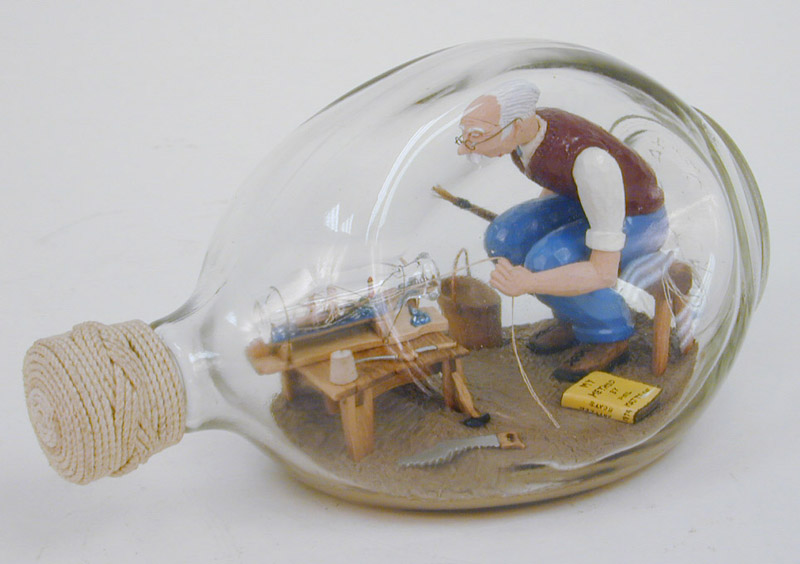 This tiny model is more than just a ship in a bottle—it contains an entire story. Within the glass, a ship builder is at work constructing an even smaller ship in a bottle. The figure was carved in several pieces, which were inserted into the bottle and assembled inside. The entire scene includes 52 separate pieces. 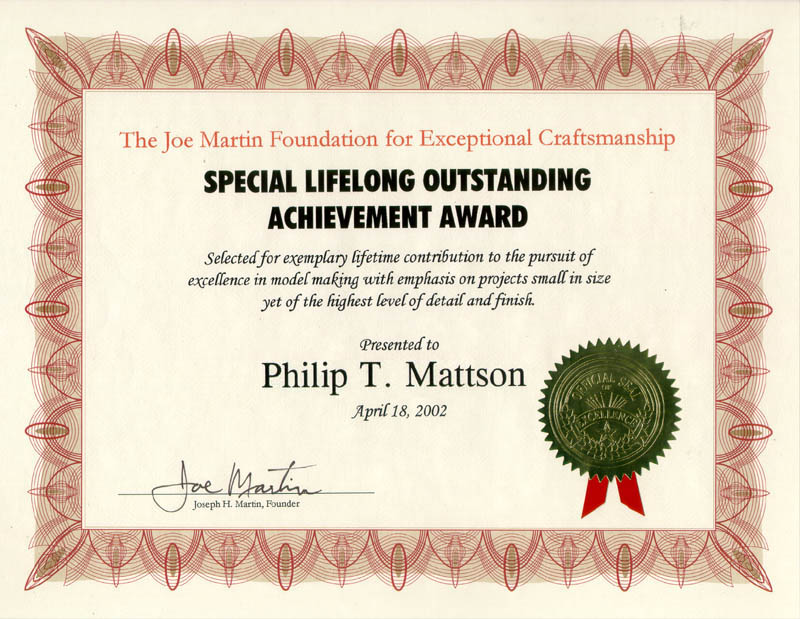 In recognition of his attention to detail, the outstanding craftsmanship of each and every part of his models, and his mastery of so many varied techniques, The Joe Martin Foundation for Exceptional Craftsmanship is presenting a special award for lifelong achievement in the field of modeling to Phil Mattson.

Starting with his first award from the Philadelphia Commercial Museum at age 13 to this award 69 years later, Phil Mattson’s life has been devoted to a quest for excellence in craftsmanship.

In recognizing Phil’s achievements, we hope it will encourage others to accept nothing less than the best they can do in modeling, and all endeavors they attempt in their lives—for craftsmanship is not only a skill that is learned with practice, it is an attitude that carries through to all aspects of your life. 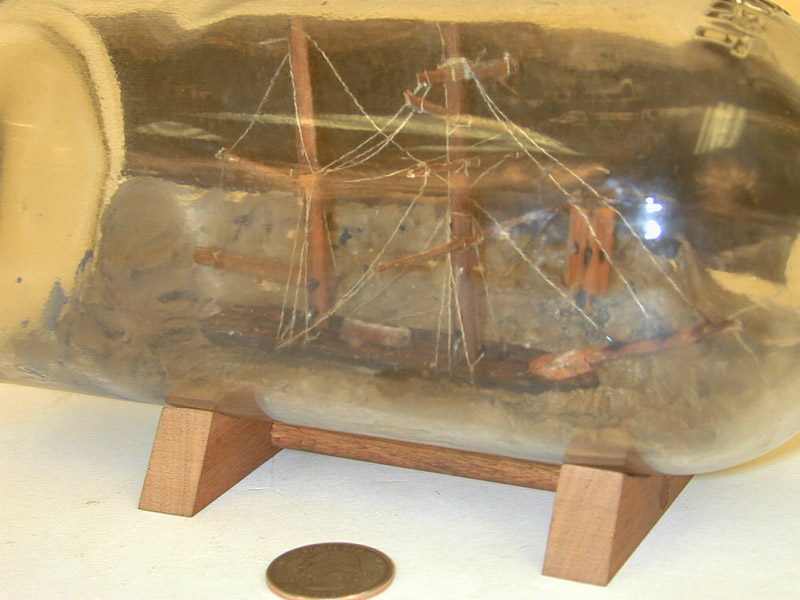 At age ten, Phil made his first attempt at model building with this ship in a bottle. A US quarter gives scale reference.

When Phil was a young boy, a handyman who worked for the family gave his dad a ship in a bottle as a gift. That model sat on his father’s desk, where it could be observed, but not touched. Phil was so intrigued by the model that at age 10 he decided to build one himself. The handyman showed Phil the basics, and from that point forward he was off on his own.

However, times were tough during the Great Depression. The Mattsons lost their family home to the bank and were living with relatives. Materials and tools for hobby projects were not easy to come by, but Phil’s family supported his efforts any way they could.

His first model was made from whatever materials were on hand, and was fairly crude by expert model making standards. However, the model stood the test of time, and remained in Phil’s collection for many decades. At age 13, Phil built a large detailed model that won second prize in a ship model competition for the Spirit of Youth Exposition, at the Philadelphia Commercial Museum. He was sick on the day of the presentation, and had to stay home; but his mother took the model to the museum in a taxi for him. Phil was still proud of that first award, but had since lost track of the ship model. 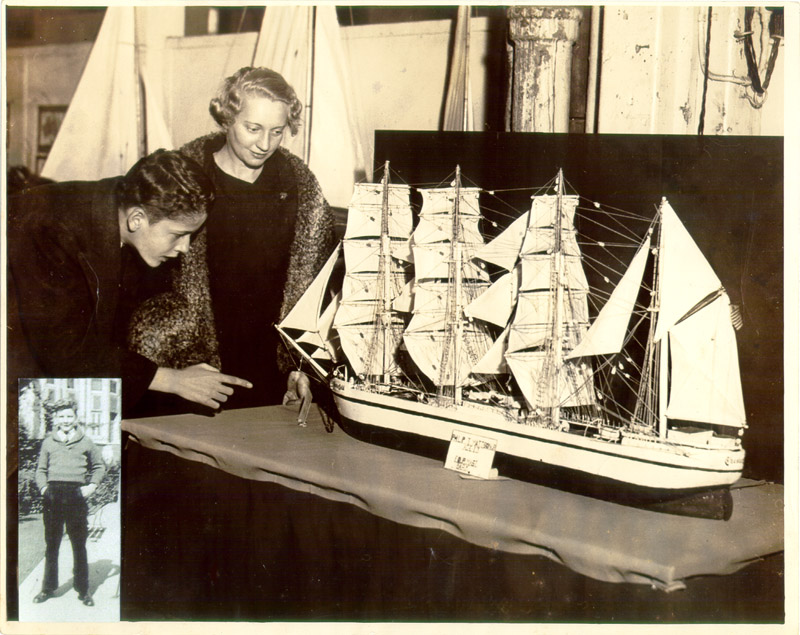 Phil’s prize-winning model ship, which he built at just 13 years old. It’s shown here on display at the Philadelphia Commercial Museum. The museum’s curator and a friend are shown with the model, as Phil was sick during the presentation. The small inset photo shows Phil as a young teen.

Phil’s Life and Career Outside of Model Making

In 1943, Phil was drafted into the Army as a private. Because of his training in mechanical engineering and machine design at Stevens Institute in New Jersey, he was assigned to the Manhattan Project in New York. This was the top secret project to design the first atomic bomb. Phil would become a Master Sergeant and specialist in seals and pumps. He ended up working for several contractors making specialized equipment during the course of the project.

After the war, in 1946, Phil left the army and studied physics at George Washington University. Along with his studies, Phil was also working for the Johns Hopkins Applied Physics Laboratory in Silver Spring, MD. This led to an assignment working on the first subsonic guided missiles until about 1950. From then until 1958, he worked for Vitro Corporation on ordinance projects including torpedo guidance systems.

From 1958 until his retirement in 1978, Phil worked for General Atomic in San Diego on the design and construction of nuclear power plants. He became the supervisor for the high level “hot cell,” where the highly radioactive material is worked on with remote telemanipulator hands. A lot of special jigs and fixtures had to be designed to get this sensitive equipment to work safely and efficiently.

When Phil had entered the service and married his wife, Helen, in 1943, his spare time was in short supply. Phil’s modeling projects were put on hold for many years until his kids entered college. The Mattsons had three children: Claudia is a high school science teacher, Greg is a medical doctor, and Rebecca is a career planner at Humboldt State College. By the mid 1960’s, Phil finally had some free time, so he got back into modeling.

Although, he did take about 12 years off between 1972-1984 to build a 40’ motor-sailboat in his back yard. (Though he and his wife had plans for long-distance sailing adventures, the reality of seasickness took the fun out of open ocean sailing for them, and they sold the boat a few years after its completion.) Throughout his life, Phil was always interested in boats and sailing. In addition to his detailed models, Phil built many pond sailers—both free-sailing and radio-controlled. He also enjoyed wood carving.

The John Ericsson was a whaleback Great Lakes freighter, designed by Captain A. McDougall. It was built in Superior, Wisconsin in 1896. The ship was named after a friend of Captain McDougall, who was the inventor of the first screw propeller. It was designed to carry freight on the rough waters of the Great Lakes. Phil’s model is 24.75” long.

Practice Makes Perfect, Even for Experts

As a matter of interest, Phil was asked why two of the tiny models he built were of the same ship, but at different scales. The first Norwegian trawler was about 2” long, while the second was about 1″ long. Phil noted that after long spells of working on his house, or on full-size projects, it would take a while to regain his modeling skills. So, he would first build the smallest model that he could. Then, when his skills were honed, he would build it again at half the size of the first model!

At that point, he could confidently return to work on whatever scale ship model he was building at the time. Fine scale modeling, like any skill that involves dexterity, requires constant practice in order to stay sharp. Even craftsmen of Phil’s skill level must sometimes work up to (or down to) certain projects with a little practice beforehand. 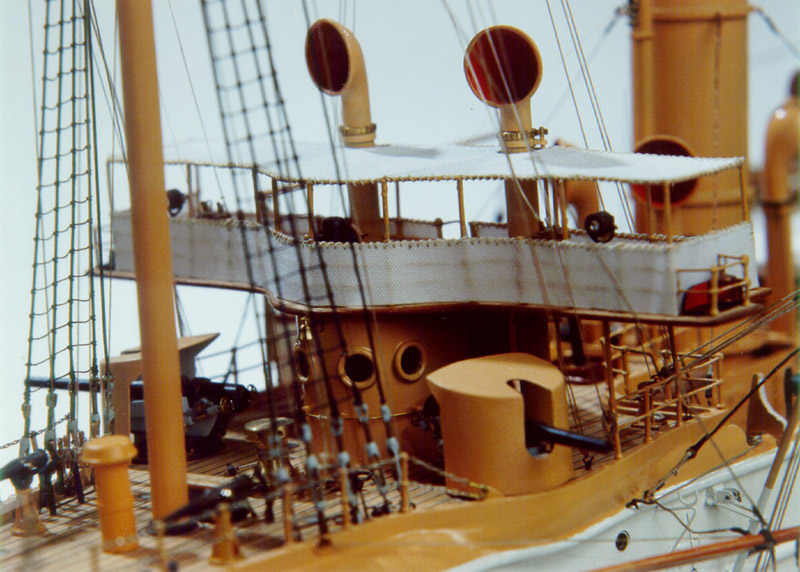 Details from the USS Bennington model. Phil built this ship between 1990-92. This photo shows some of the canvas-covered bridge details, and armored deck guns amidships. The model was built for the San Diego Maritime Museum, where it was put on display. (Photo: Mike Barth) 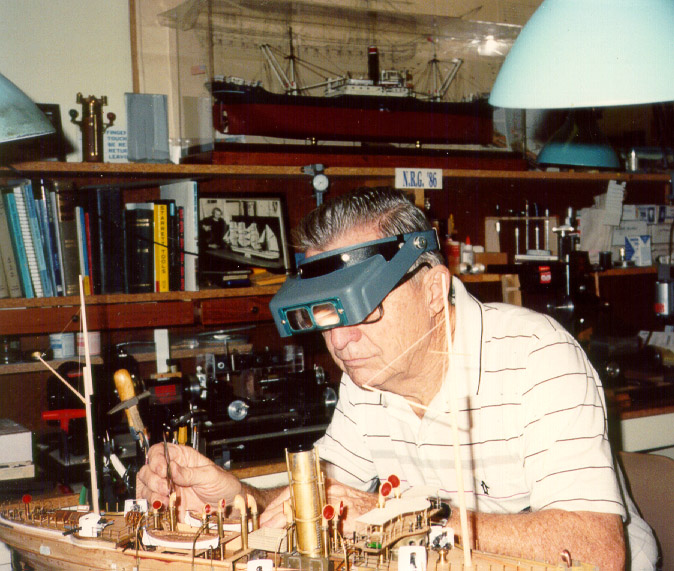 Phil Mattson working on the USS Bennington model in his home shop.

Along with model building, Phil also wrote several articles on ship modeling for both Model Ship Builder magazine, and the Nautical Research Guild. He was also an active member of the San Diego Ship Modeler’s Guild, and attended their monthly meetings. Before his passing in March of 2013, Phil’s last scale model was of the 74-gun British ship of the line, HMS Alfred. From his first award at the Philadelphia Commercial Museum to his 2002 Lifetime Achievement Award, Phil Mattson’s modeling career spanned over 69 years of excellence, and showed no signs of slowing down well into his 80’s.