A Collection of Magnificent Motorcycle Models From Spain 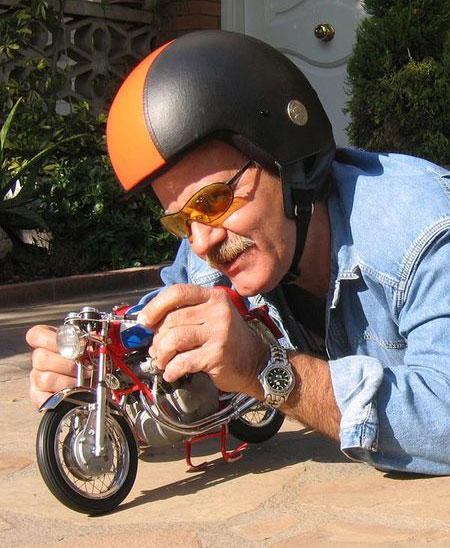 The work of Pere Tarragó first came to our attention when a link to his website began circulating among several of the world’s best model makers. They noted that his work was highly detailed, and virtually flawless. One look at the photos of his motorcycle models proved this to be true. Despite the fact that Pere lives and works in Spain, his website offers several translations. The history below was adapted from Pere’s written biography. Additionally, Mr. Tarragó submitted several photos for publication here.

What started as a hobby is now a full-time business, as Pere builds motorcycle models on commission. He prefers to model his creations by measuring and scaling down parts from a full-size motorcycle.

Because he takes measurements directly, Pere’s early selection is mostly based on bikes that he has owned, or models that are more available in Spain. These include Montesa, Bultaco, CZ, MV Agusta, etc. However, Pere has also modeled classics from Indian, Henderson, Griffon, and NSU. Though many of these bikes may not be familiar to American riders, the quality of the models themselves are on par with the real motorcycles. Pere’s scale model bikes are truly beautiful. 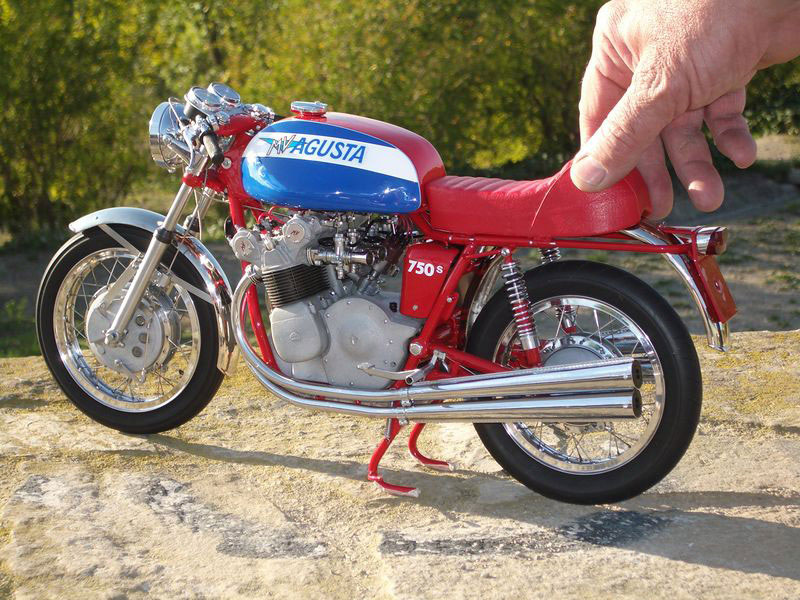 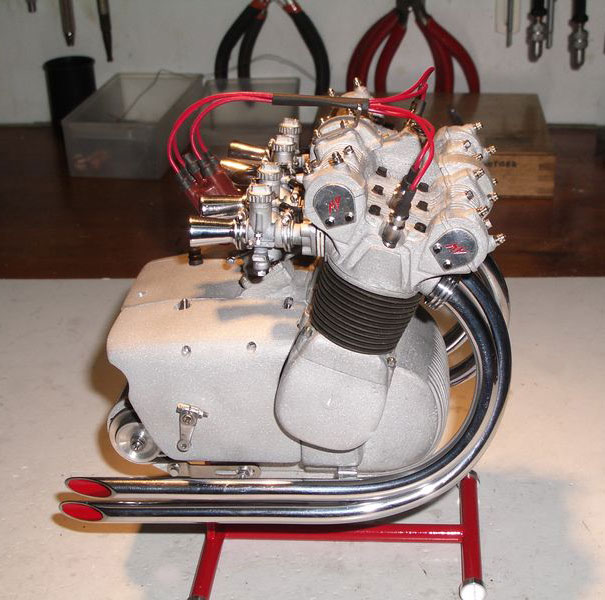 The 1/5 scale engine for Pere’s MV Augusta model. The level of detail in every component is impressive.

When he was a child, Pere Tarragó took his first steps into the model making world with Meccano pieces (similar to Erector Set). However, Pere immediately wanted to build more than the supplied pieces allowed. He began to add his own pieces, and more realistic finishes, for a better final result. When he was 16, Pere made his first car model with zinc plates and welded tin—still taking advantage of some pieces from Meccano.

Eventually, Pere completed a series of seven cars for his first collection, which increased the necessity for perfection. He continually wanted to learn more, and to improve the fits and finishes of his pieces. Pere quickly found that he needed more and better tools to obtain the results he was looking for. Conventional tools were no longer enough, as he needed his own very specific tools to meet some unique needs. 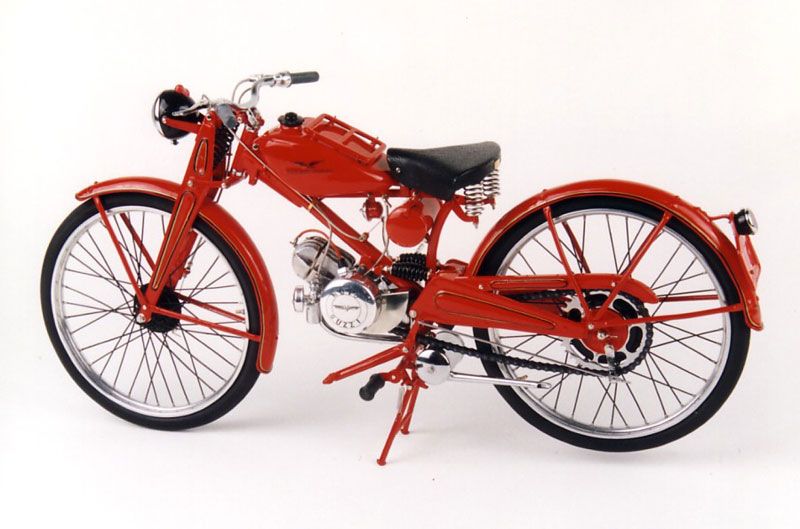 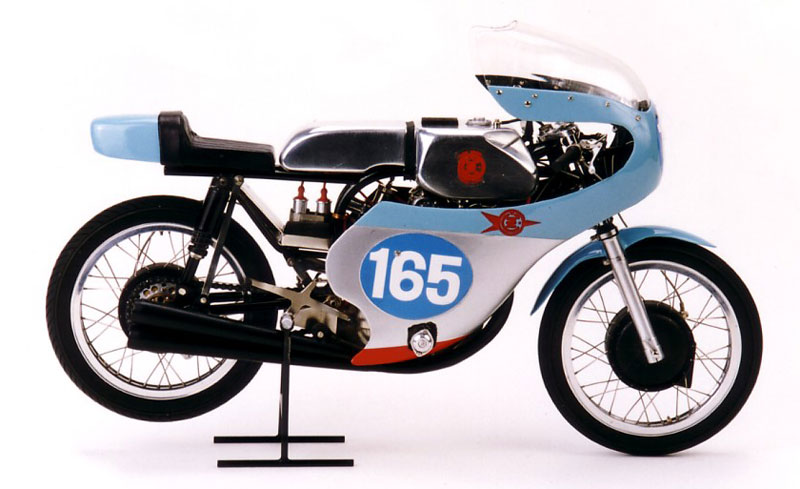 During the next ten years, Pere experimented with all kinds of tools—lathes, milling machines, autogenous welding systems, and more.Since he was a big fan of motorcycles himself, Pere began to build small classic bikes. He started with Bultaco, Ossa, Montesa—all bikes that he owned at some point—built at 1/6 scale.

The quality of these creations was such that several magazines became interested in Pere’s work, and a number have published articles on the scale motorcycles. The high standard of his models has also attracted several organizations and companies to promote his work. 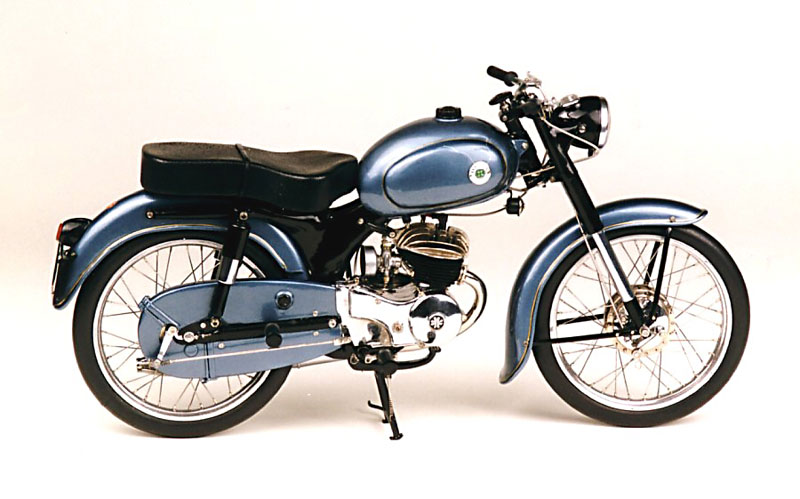 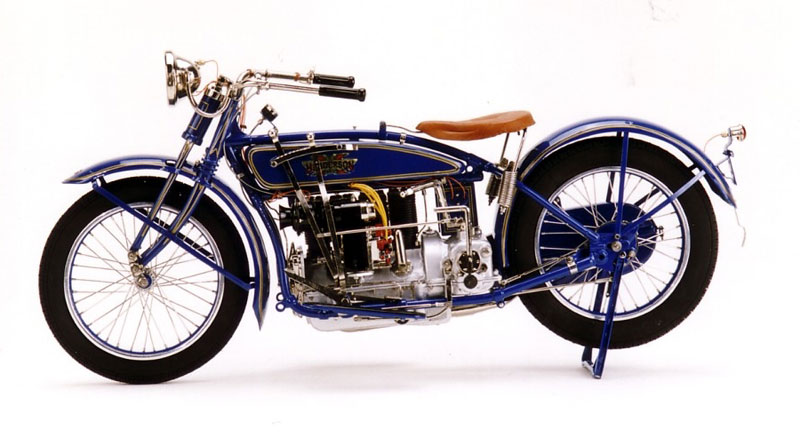 In order to build a scale model, Pere always starts off by referring to the original prototype. First, he observes the motorcycle in full detail to become completely familiar with its general lines; otherwise, he might lose some key details. Pere then begins to copy or trace the elements that involve engraving, decals, silk screening, or other graphics from the real motorcycle. Those elements are the only ones that he doesn’t make in his own facility. 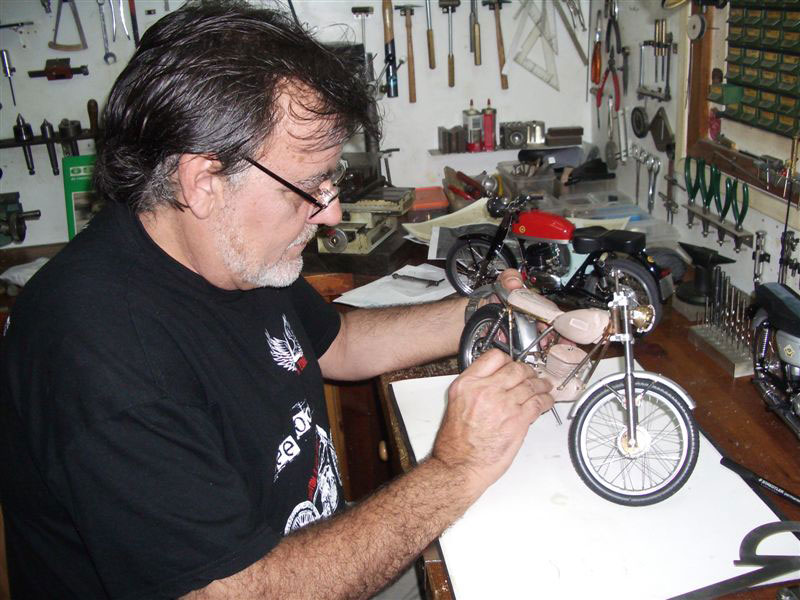 Pere at work on his 1/5 scale OSSA 250 trial bike. This is a replica of the Mick Andrews trial bike. Pere noted that these bikes each take about 600 hours to complete. 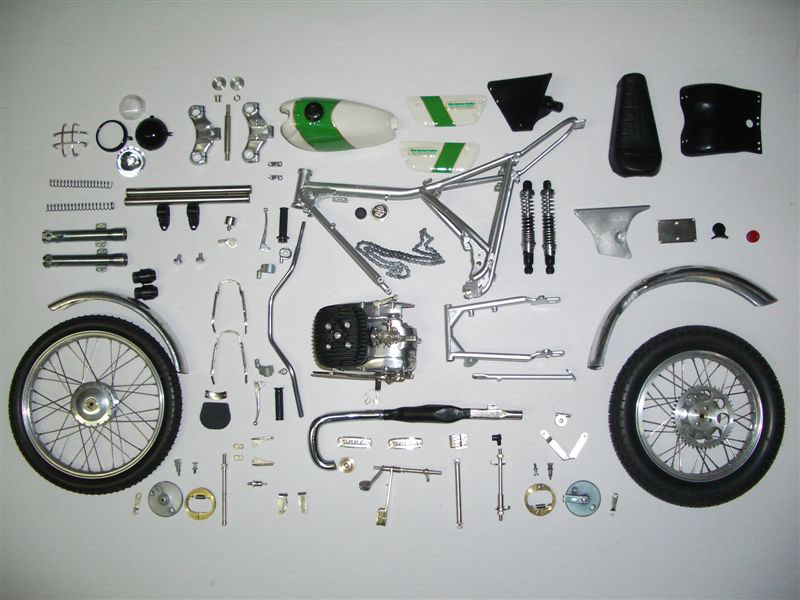 Components for the 1/5 scale OSSA trial bike are laid out before assembly.

Once a given model is finished, Pere checks and adjusts the operation of all mobile elements of the motorcycle. These components include the brakes, clutch, wheels, transmission, etc. Then, he completely disassembles all of the pieces and gives them the finishing touch. This includes polishing, nickel or chrome plating, and painting as required. Finally, Pere begins the reassembly process, which takes approximately 250 to 400 hours depending on the model.

Typically, the materials that Pere uses for his models are steel, aluminum, brass, thin O-wire, Napa leather, polycarbonate, and automotive paints. Once a model is finished, Pere puts together an album with photos and documentation of the entire build process. This album is given to the customer along with the finished model. A copy of the scale plans is also included in the file. 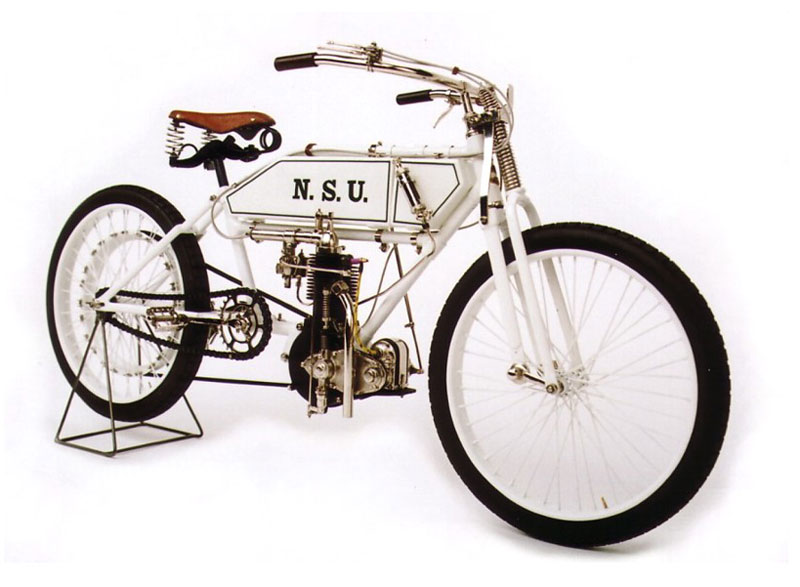 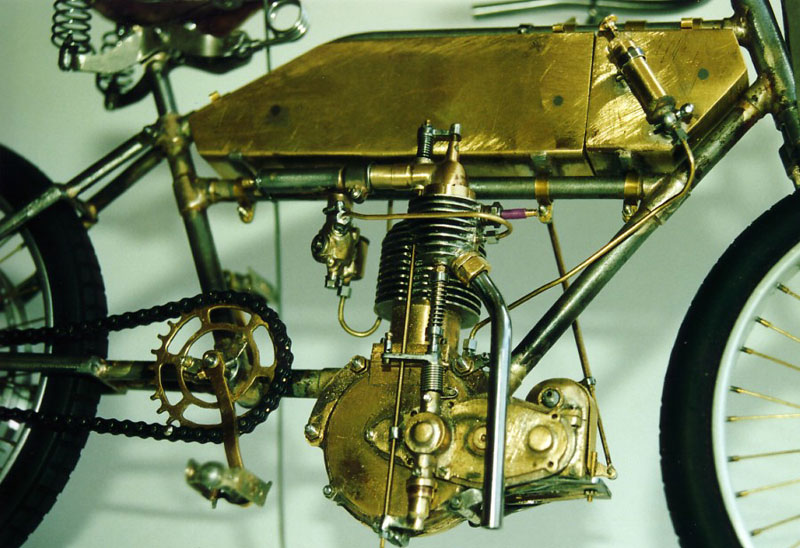 A closer look at the N.S.U. model before final painting. Pere spares no details in his miniatures.