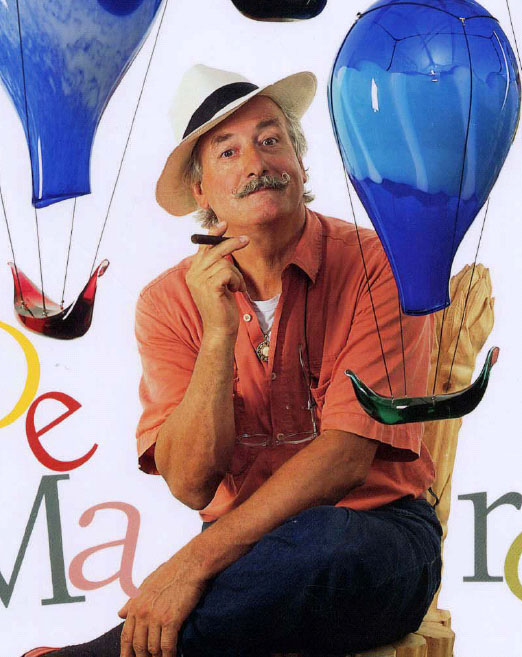 Livio De Marchi came to the attention of the Craftsmanship Museum when a peer suggested we take a look at his work. Normally, the focus of the Joe Martin Foundation is to display the work of craftsmen who might not otherwise come to the attention of the public. In Mr. De Marchi’s case, his work has already received worldwide acclaim. However, we felt that the distinct quality of his carving skills merited praise here.

Additionally, Mr. De Marchi’s work displays a certain sense of whimsical contrast between subject and material that jars the senses. The soft folds of cloth on a table, or the smooth curves and mechanical detail of a full size Ferrari F50, are not typical subjects for a wood carver. When something in America is described as wooden, it carries a connotation of stiffness. Mr. De Marchi’s work, though carved from wood, is anything but stiff. Even so, the common wood that he carves—knots and all—make it clear that the artist is not trying to disguise the nature of the medium.

Mr. De Marchi’s work has been honored many times in the art world, but we would like to honor him here for his expert craftsmanship in woodworking. His skill in that realm had to be mastered before the art could ever be created. We hope you enjoy this slight departure from our typical displays of craftsmanship. 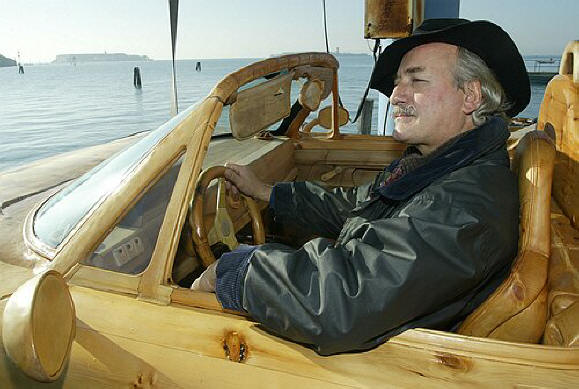 Livio De Marchi navigates the canals of Venice in his floating, powered, carved wooden Ferrari F50. He created a number of other floating works of art as well, from different cars to origami sculptures—all rendered in wood. 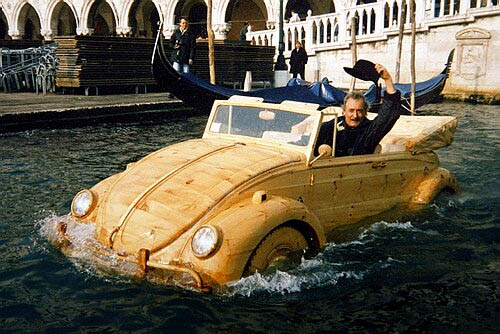 Mr. De Marchi tipping his hat as he floats down a Venice canal in a wooden VW Bug—which he carved and built in its entirety.

(Reproduced in part from Livio De Marchi’s website, with permission.)

Livio De Marchi was born in Venice, Italy. As a child, he worked on ornamental sculpture in the Venetian tradition in the workshop of a local craftsman. Around the same time he was studying art and drawing at the “Accademia di Belle Arti” in Venice.

His career started there, as Mr. De Marchi showcased astounding skill at molding materials, transforming them with wit and panache, and creating sculptures detailed to perfection. During his artistic evolution, De Marchi worked first in marble, then bronze, and eventually in wood. However, wood has always been his favorite material, because it affords him a vitality which other materials cannot.

After opening his own studio, De Marchi allowed his artistic fantasy to take flight. A long artistic evolution led to De Marchi’s own unique sculpting style. His artwork has been shown in cities all over the world, including Milan, Florence, London, Paris, Düsseldorf, Zürich, New York, Los Angeles, San Francisco, and Tokyo.

Additionally, his work has received acclaim in a number of magazines, such as Interior Design, Capital, Casa Vogue, Madame Figaro, Vogue, Hauser, and more. Furthermore, Mr. De Marchi’s work has been the subject of many television features in several foreign countries. 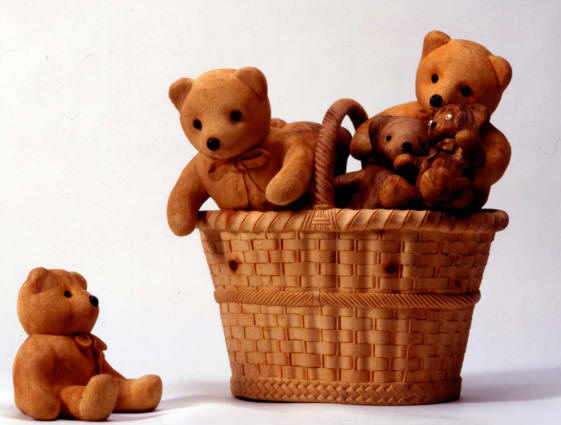 Soft, fuzzy teddy bears and a wicker basket, all rendered from wood! This kind of excellence in carving, and sensitivity to surface texture, is apparent in all of Livio De Marchi’s work. 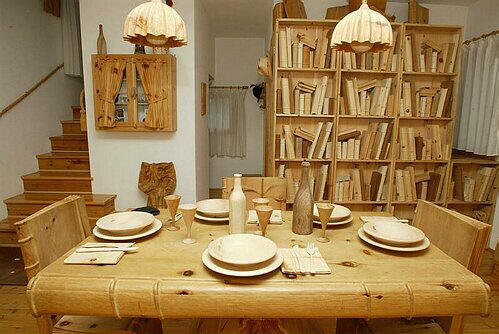 The living room of Mr. De Marchi’s “House of Books.” Everything is carved by Livio, and much of the furniture has the appearance of being carved from book pages and bindings.

Mr. De Marchi’s website displays the great variety of his work, and lends insight into the artist’s life and style. Although his work is primarily done in wood, De Marchi also created an interesting selection of glass pieces—some of which are combined with wood. We’ve reproduced some of his work here, but the link above has much more.

When it comes to his wood carving, Livio De Marchi uses simple and familiar tools. He uses about 100 different chisels, and an old wooden hammer which is dated from 1964. These tools are always on his workbench, and De Marchi uses each and every one of them. If just one chisel is missing, he finds it difficult to work. 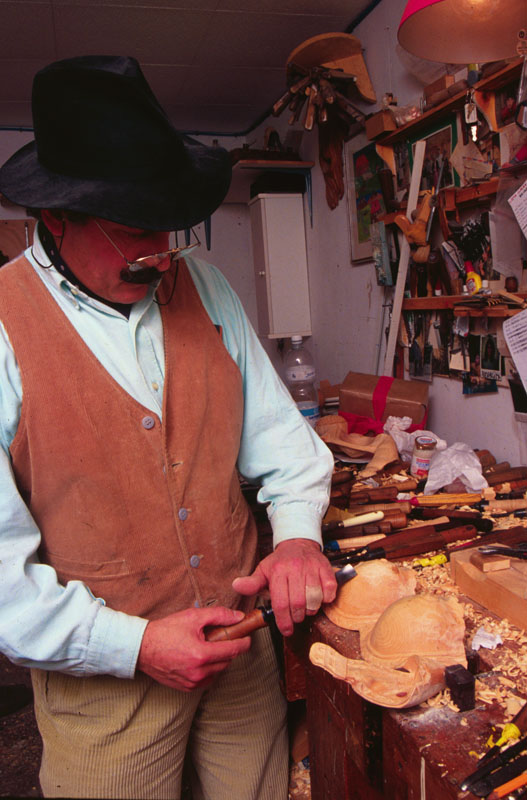 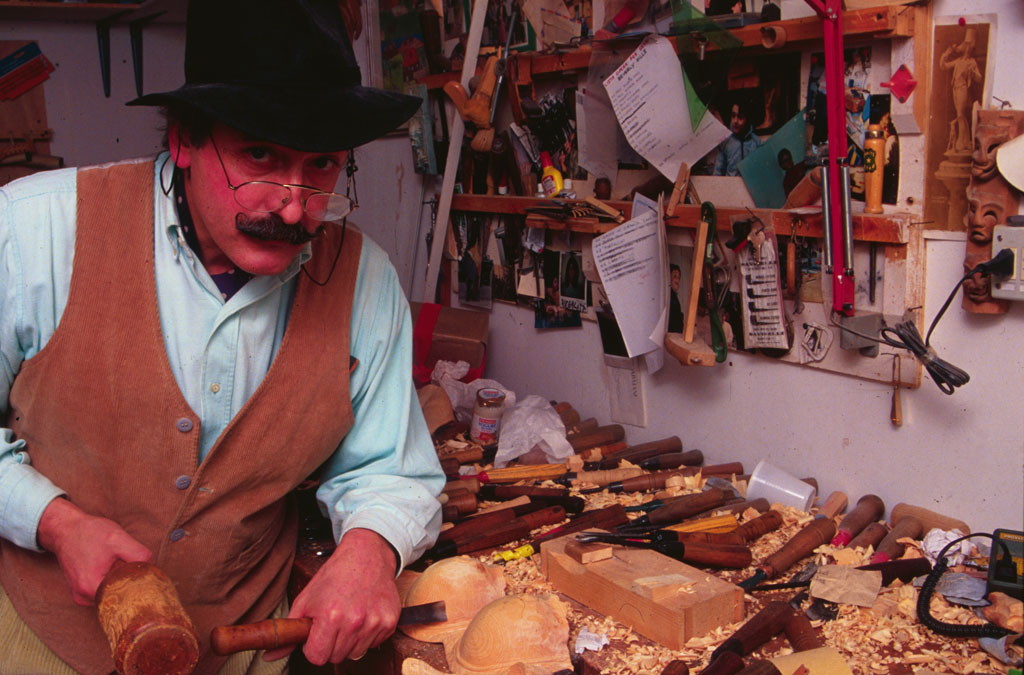 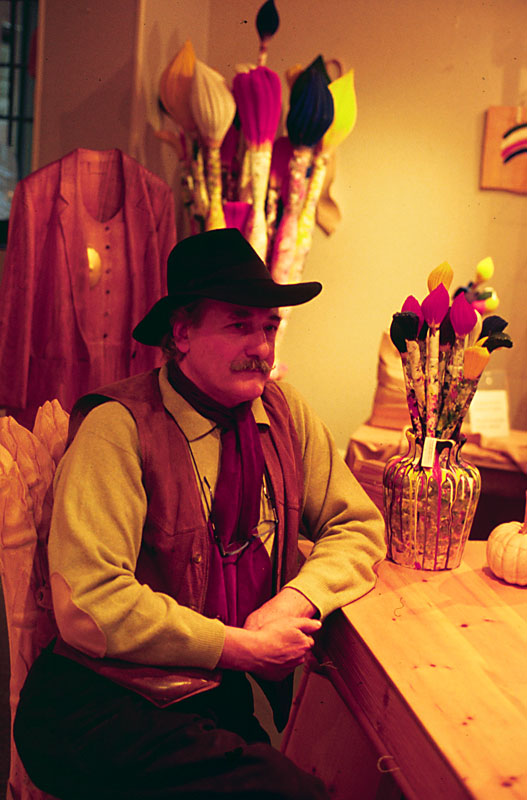 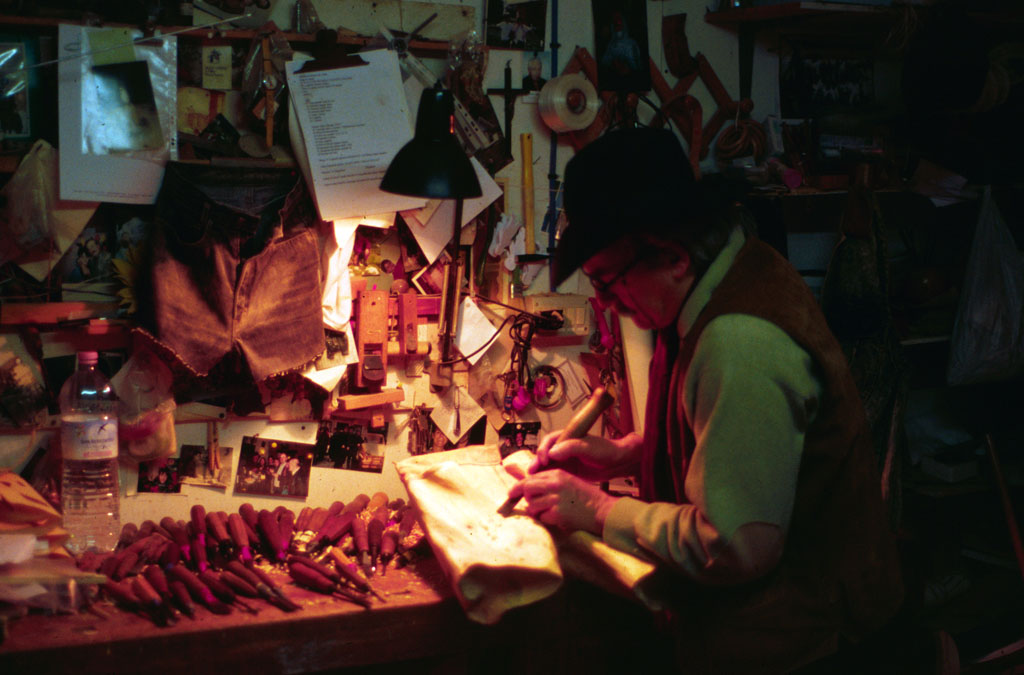 Livio De Marchi at work in his studio. Notice the many chisels strewn about his workbench, and his wooden hammer. These photos were taken by a friend and customer.