Miniature Tools Are Just One of Jerry’s Interests 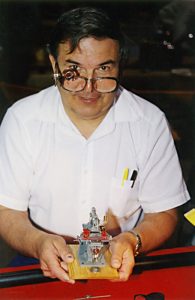 Jerry displays his 1/12 scale Brown & Sharpe mill. Note the magnifying optics attached to his glasses. Some kind of magnification is needed to work on parts this small.

Among his many endeavors, Jerry likes to make models of old machine shop tools. Like his other projects, Jerry insists on working in total scale down to the smallest fastener. On a tiny dividing head, for example, the exact number of holes and the correct pattern were adhered to. Most of Jerry’s tools are built to 1/12 scale. His post drill is much smaller than you might think from just looking at the photo. He has also built a complete machine shop model with overhead belts, a calendar on the wall, and all the rest. Below you can view more photos of Jerry’s scale model machines. Click on images to enlarge. 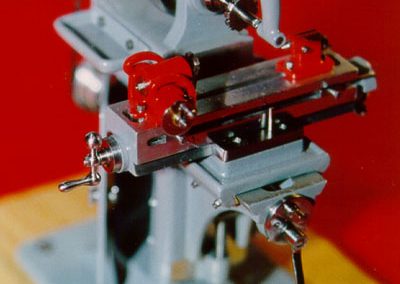 This 1/12 scale Brown & Sharpe mill started out as a PM Research casting kit. However, Jerry modified it and added a great amount of detail. Note the tiny milling cutter, and the dividing head sitting on the bed. A quarter sits on the base for scale reference. 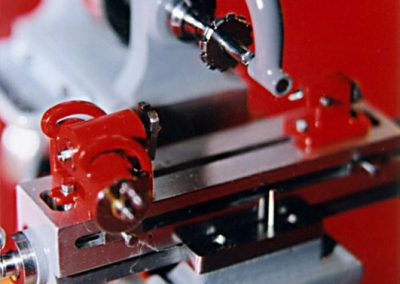 A close-up of the mill table shows even greater detail in the small milling cutter. The original kit had an access door that was inoperable, and simply marked by lines in the surface. On Jerry’s scale model, he opened up the access door and hinged it like the real thing. 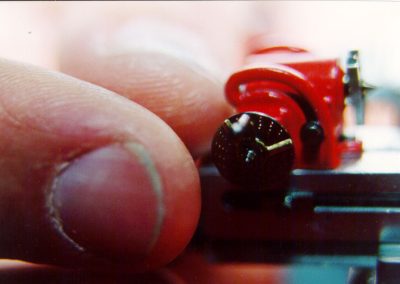 The dividing head is smaller than Jerry’s fingernail. Of course, it still has the exact same number of holes in the dividing plate, and they were drilled precisely in the correct pattern. 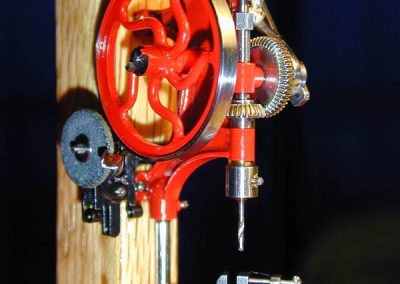 Jerry is building an entire vintage machine shop in 1/12 scale. This miniature post drill was scratch-built. The S-spoke flywheel is about the size of a quarter. 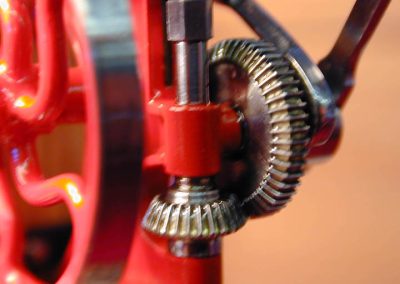 These tiny bevel gears drive the miniature post drill. Along with the engineering, Jerry also excels at getting a fine painted finish on his models. Even so, he rarely uses anything more sophisticated than a can of spray paint. 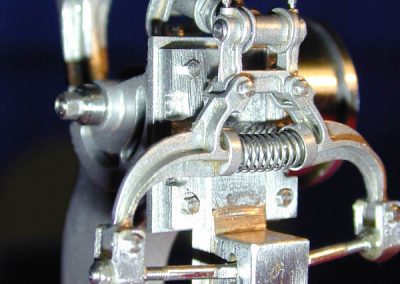 The head of Jerry’s scale model blacksmith’s triphammer. Some of the tiny parts and springs in the mechanism are visible. Notice the quality of the fillets and silver soldering. 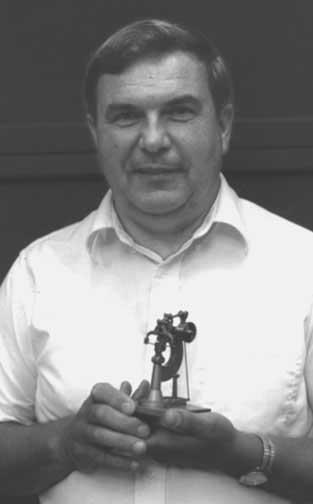 Jerry With His Scale Model Triphammer

Jerry holding his scale model blacksmith’s triphammer. It stands at about 4” tall.

Sherline is proud to confirm that Jerry Kieffer uses Sherline tools in the production of his small projects.