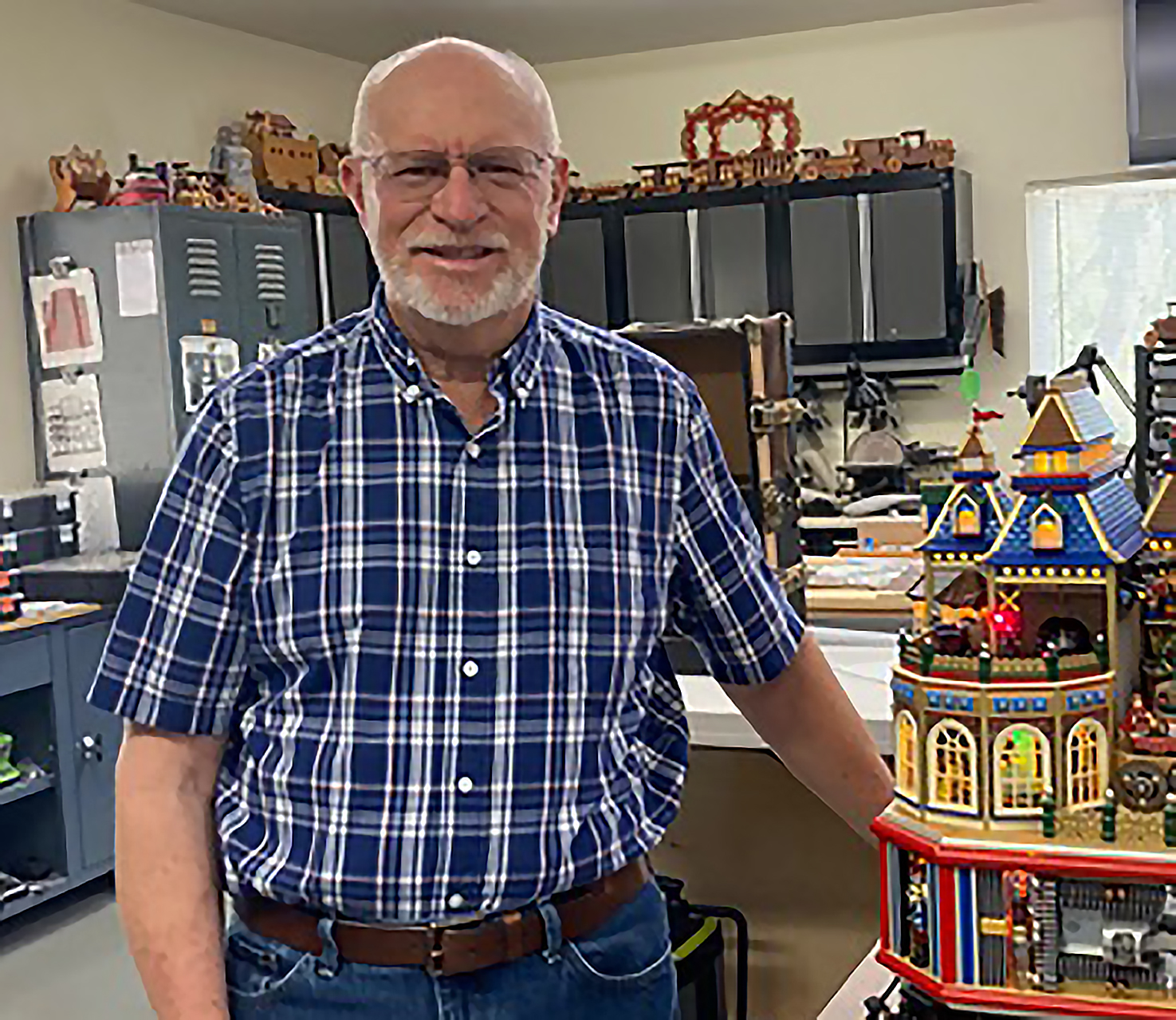 Donald Riley in his workshop.

It all started with some simple plans for a wooden toy train that Donald Riley bought at his local hardware store. After building the toy for his one year old son, Donald was hooked. What he didn’t know, however, was that he would then embark upon a years long journey building thousands of wooden toys, and designing dozens of his own original pieces. The driving force behind this labor of love is the pure satisfaction of crafting toys from wood, and handing them out for free.

After years of making toys, Donald started designing his own animated music boxes. His very first music box was the Carousel Waltz, and since then, Donald has made several others. The themed music boxes have been on public display for many years, mostly at local hospitals and libraries. Children and adults alike are entertained by the sounds, motion, and animated lighting. 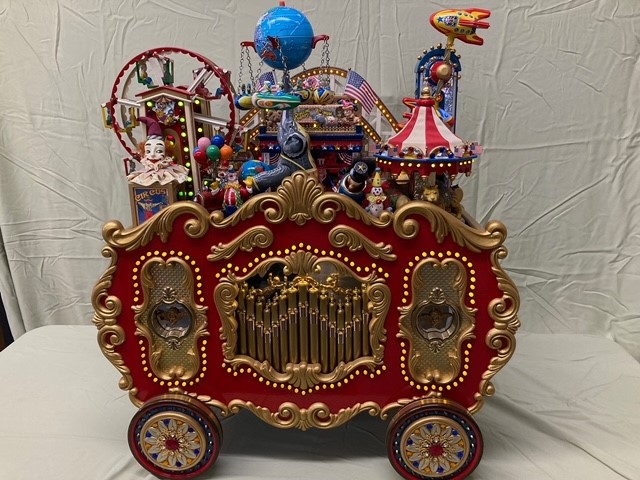 Donald built this animated music box, “Calliope” in 2005. Flashing lights and a wealth of detail make this piece a real eye-catcher. 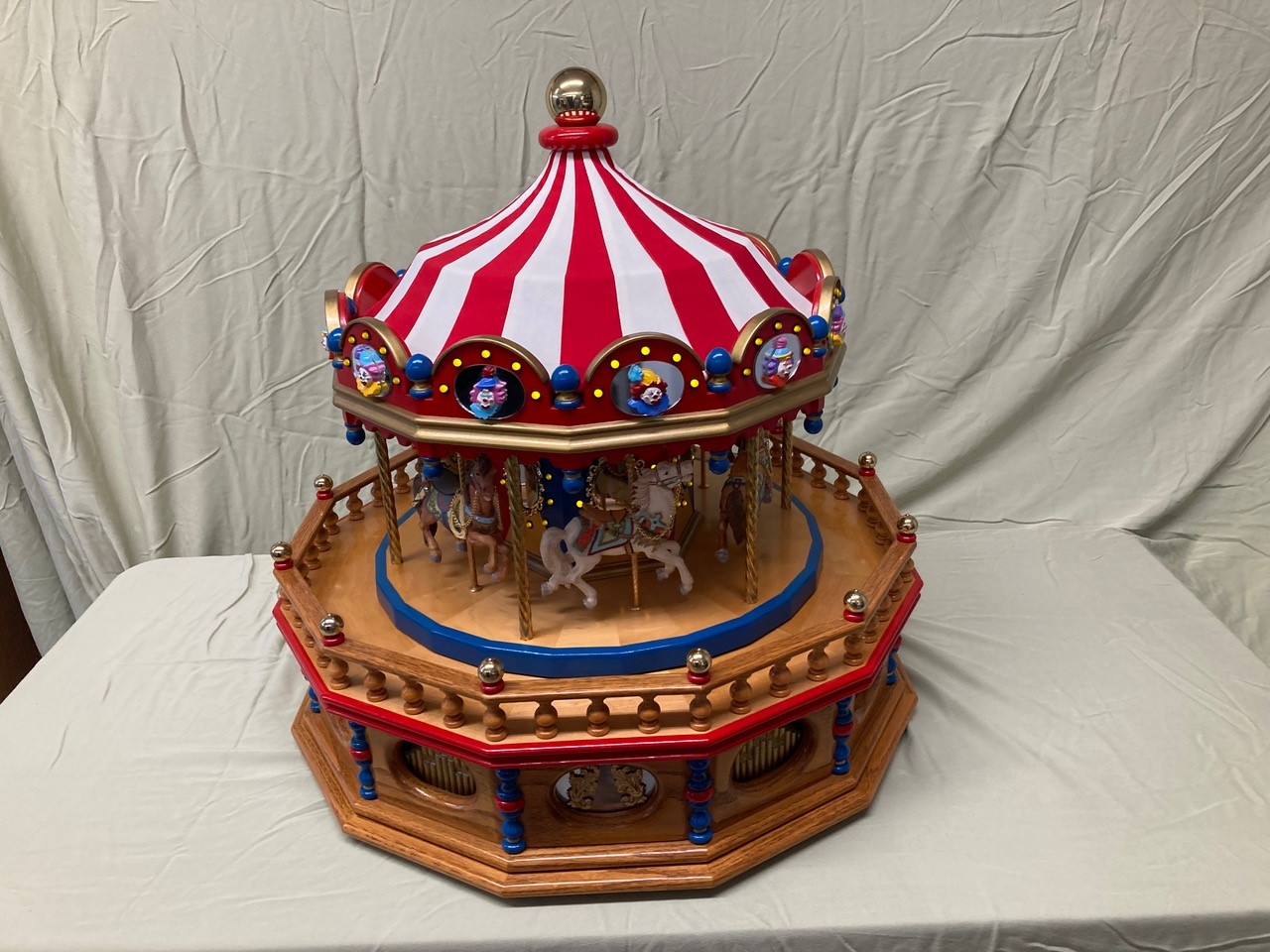 Don recalls that his encounter with that first wooden toy train has enriched his life to a great degree, and opened up many new doors. The toy maker’s motto is, “Changing the world through random acts of kindness, one toy at a time.” It’s safe to say that Mr. Riley and his family have added plenty of joy to the world with their heartfelt creations. Read a little more about their story below, submitted by Donald himself. 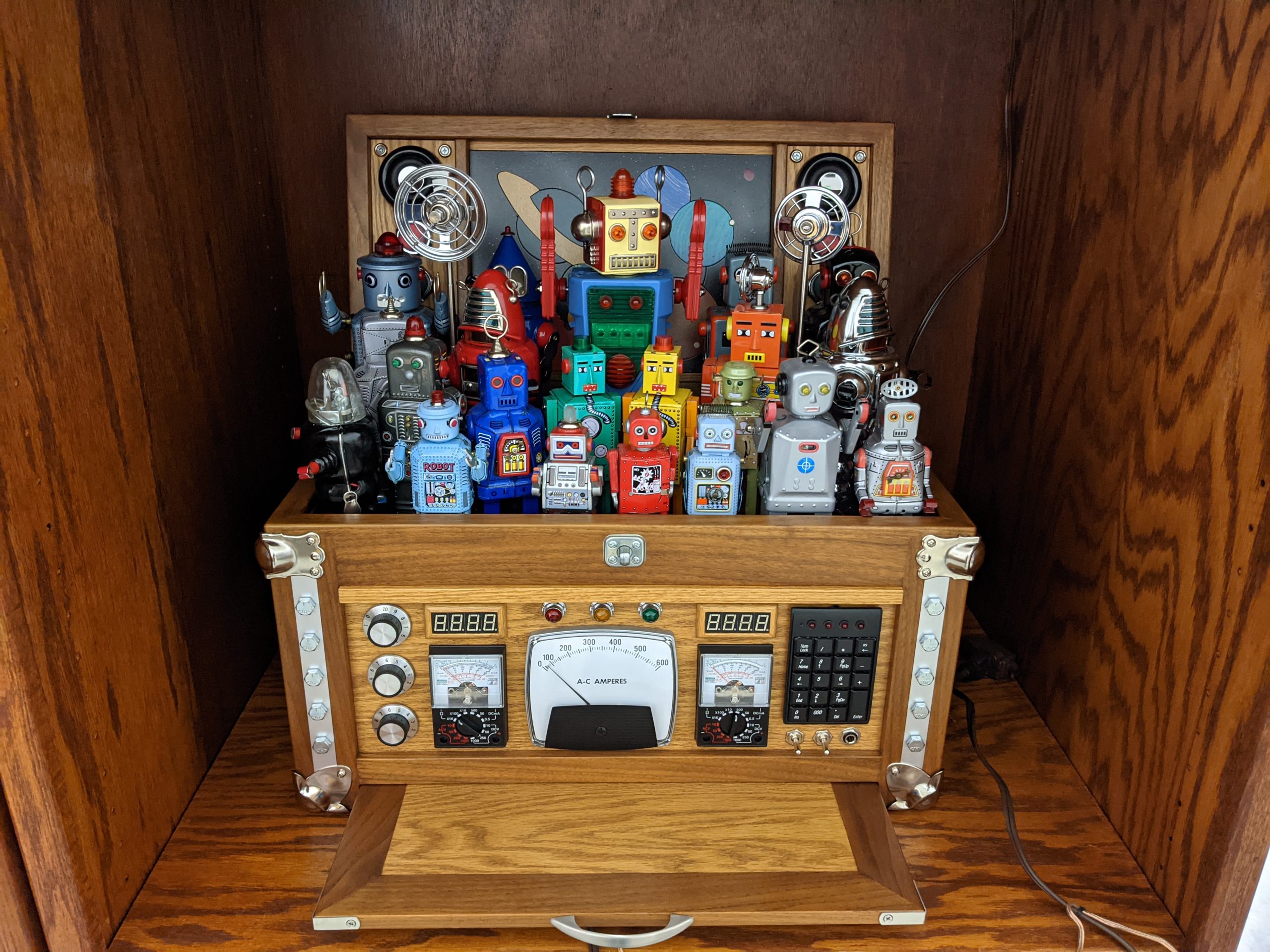 This animated music box called, “Robot Chest” was built in 2012. For years, Donald’s music boxes have entertained many passersby at local hospitals and libraries.

I wanted to share with you a story of my family in El Cajon, Calfornia, trying as it may to make a difference in our community. In 1990, I was in one of our local hardware stores. Up on a shelf was a wooden toy train, rather simple in design; your basic train engine with a smokestack, wooden people in one of the cars, a barrel car, and caboose.

I purchased the plans, and bought the wood needed to build this project for my son, Andrew, who was one year old at that time. Since that project, I have fallen into joyful bliss designing dozens, and building thousands of wooden toys. All my toys are a non-profit endeavor, and a labor of love. 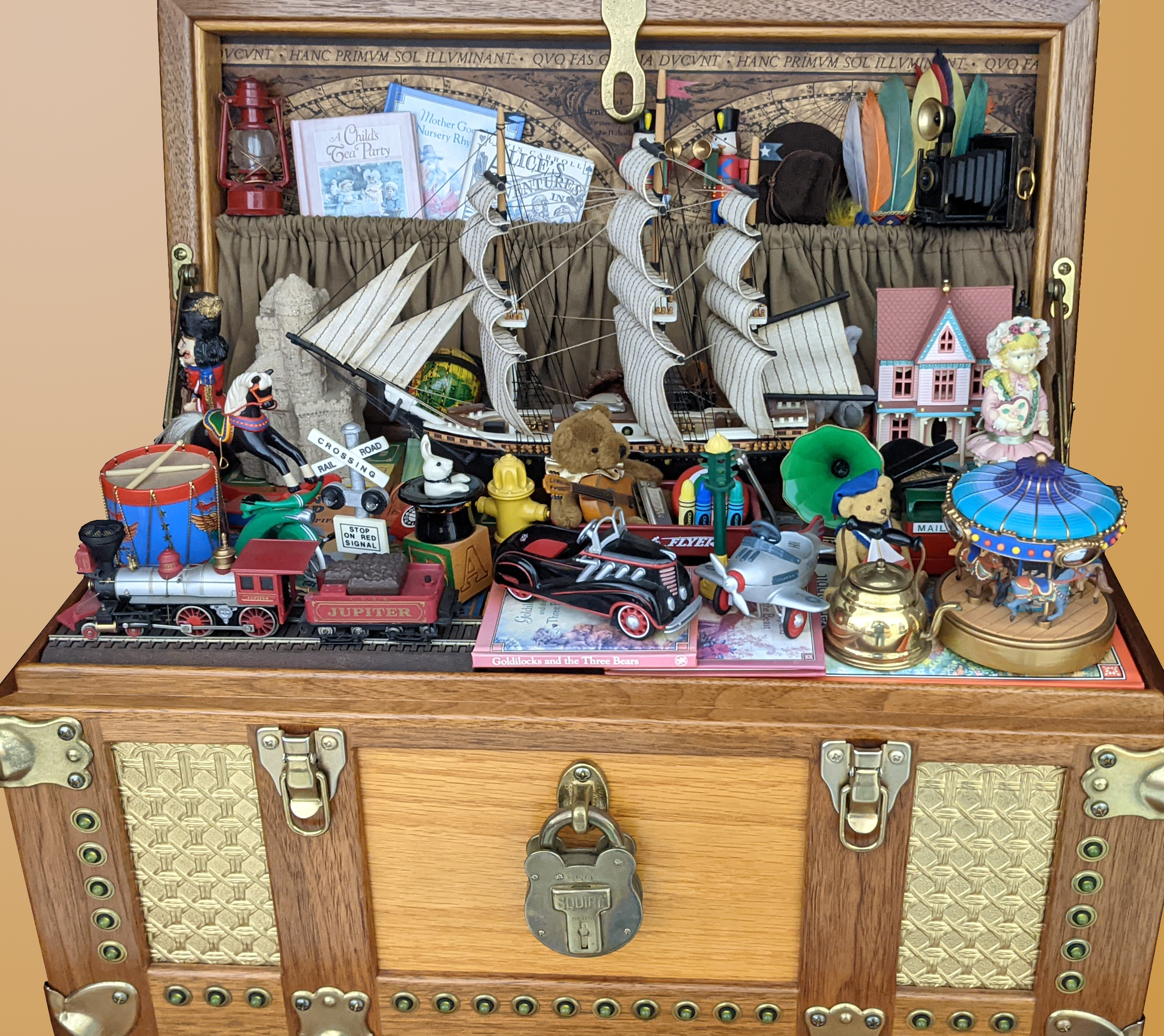 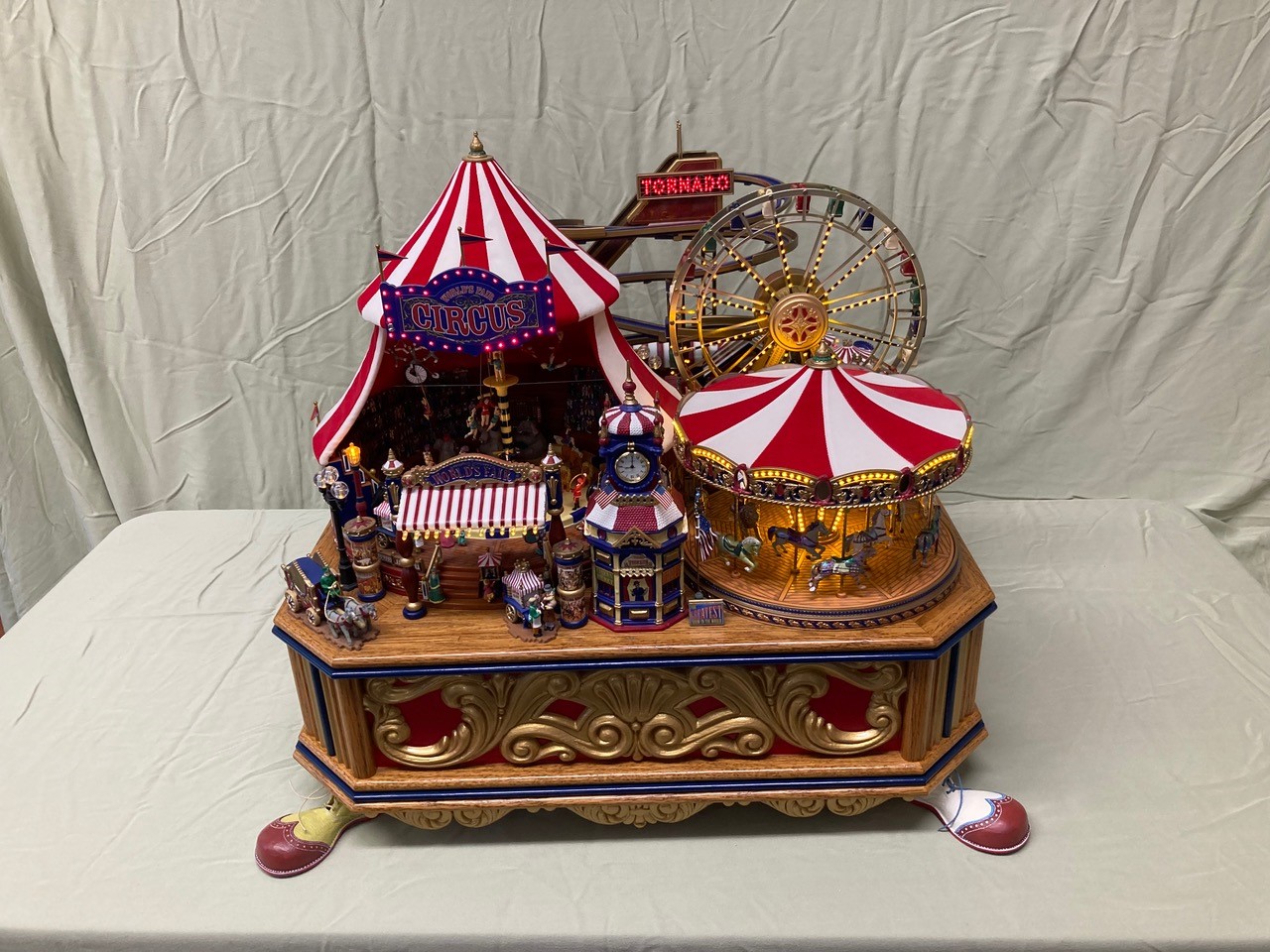 There is nothing more satisfying than creating toys out of wood, and freely giving them to others. Several years ago, I started designing one of my animated music boxes. With basic electrical and woodworking skills, I started from scratch teaching myself about motors, timers, transformers, lighting, pulley systems, painting, etc.

My first music box was The Carousel Waltz. These animated music boxes have been on public display for many years at our local hospitals and libraries. Children and adults can freely push the button on the display case as many times as desired, and will be entertained by sound, motion, and hundreds of lights. 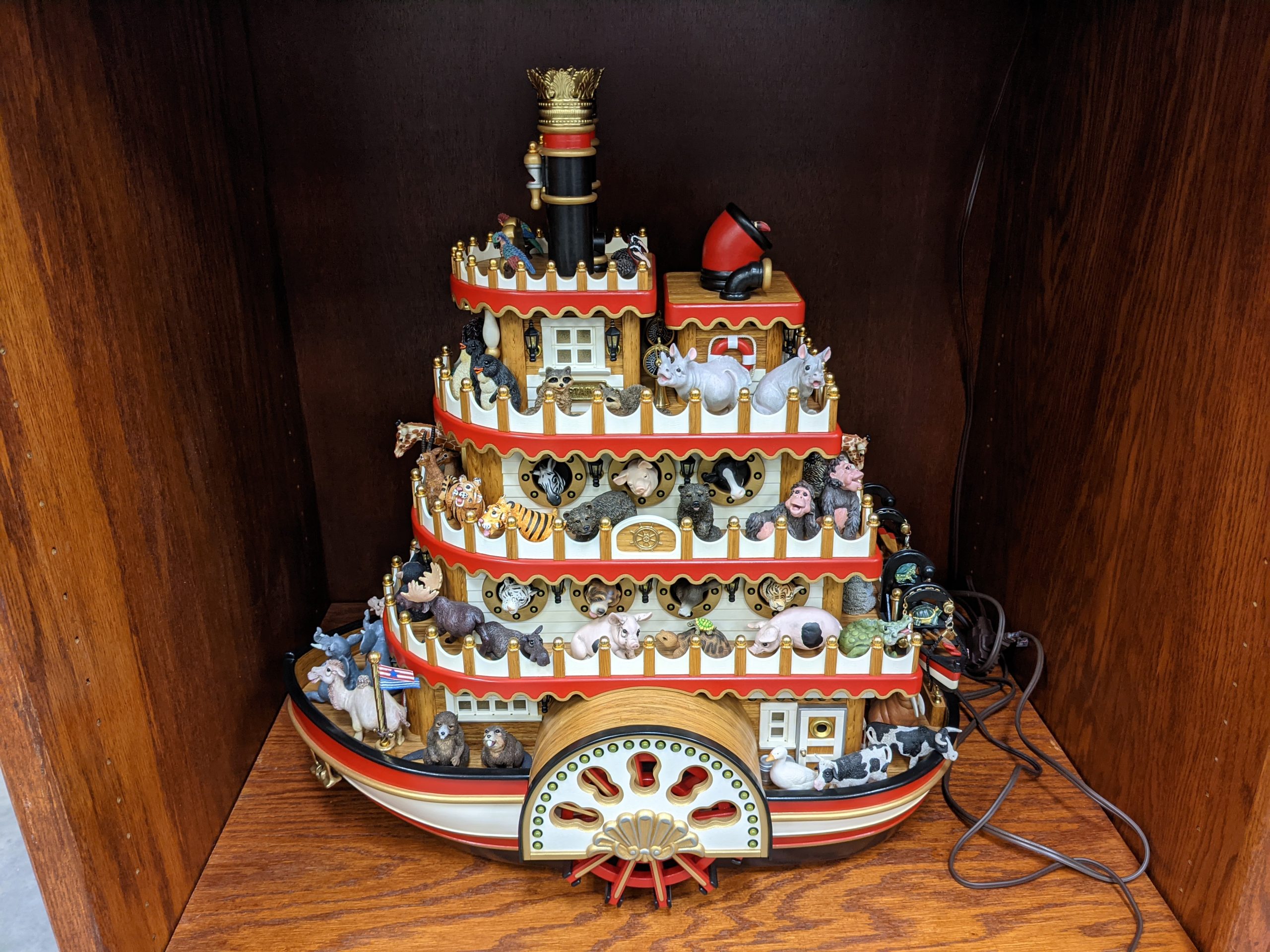 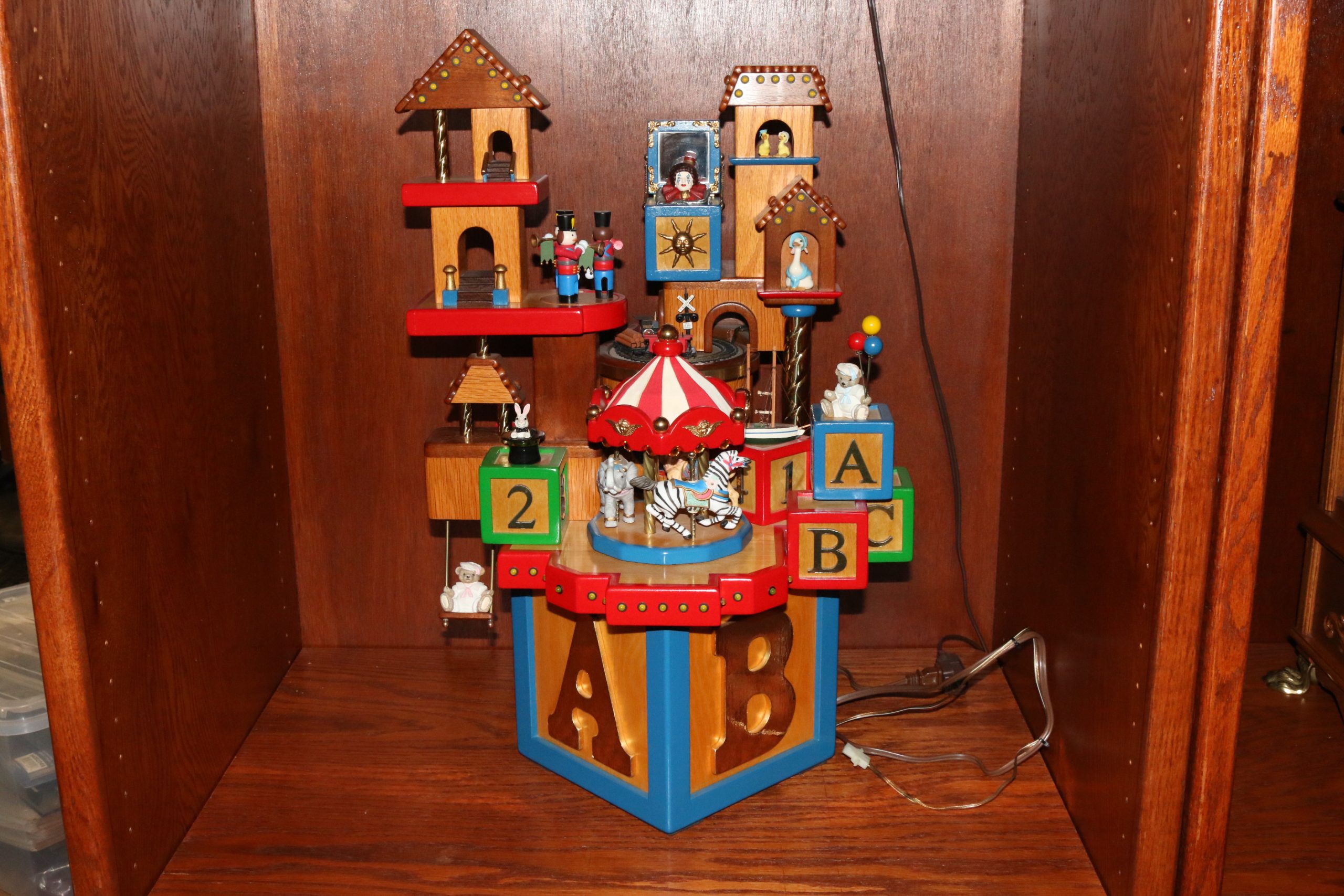 Toy building has become quite the family project over the years. My wife, Lois sews the carousel tops, the sails for the ships, and cloth bags for the toys to go into. My son, Andrew helps me clean and exchange the animated music boxes at the hospitals and libraries. This journey my family has taken together has been a priceless experience, and has allowed us to meet many wonderful people who normally would have been strangers.

My encounter with that wooden toy train has enriched my life, and opened doors of possibilities I could have only imagined. I have truly learned that when you lose yourself in the service of others, you find yourself. 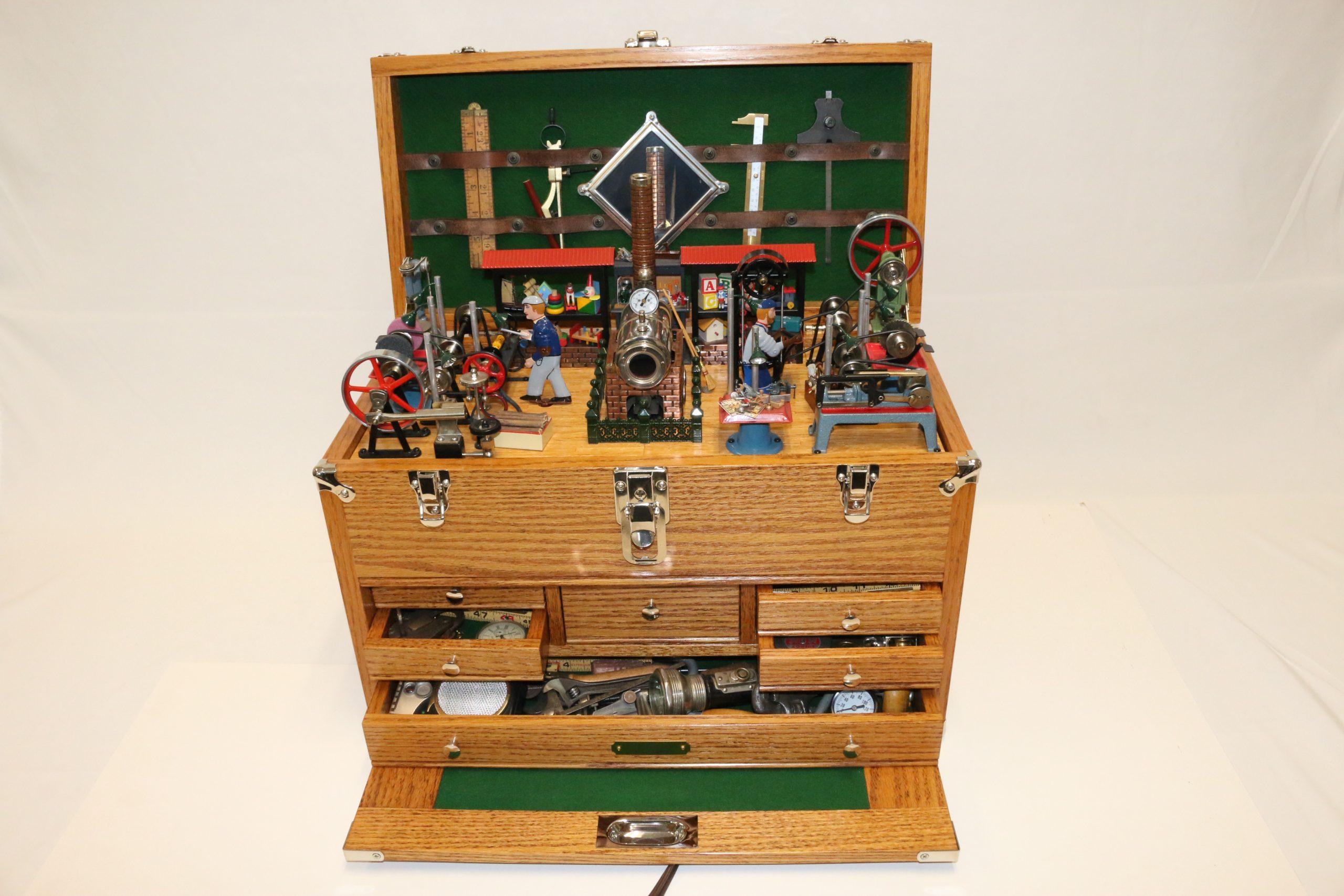 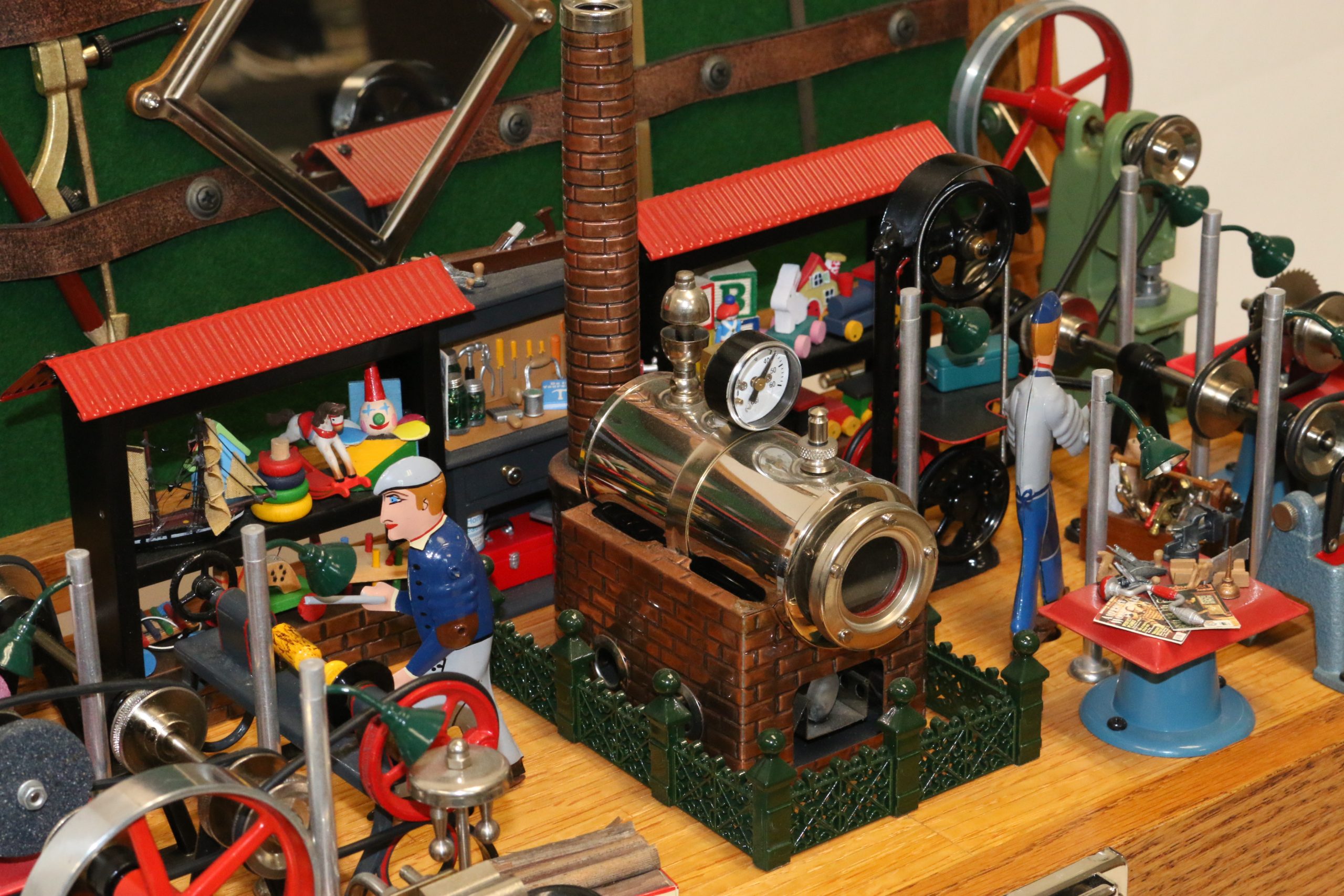 A close-up detail of the Tool Box reveals many tiny elements.

Note: This is not a complete list of Donald’s projects, it features several of his most prominent pieces. 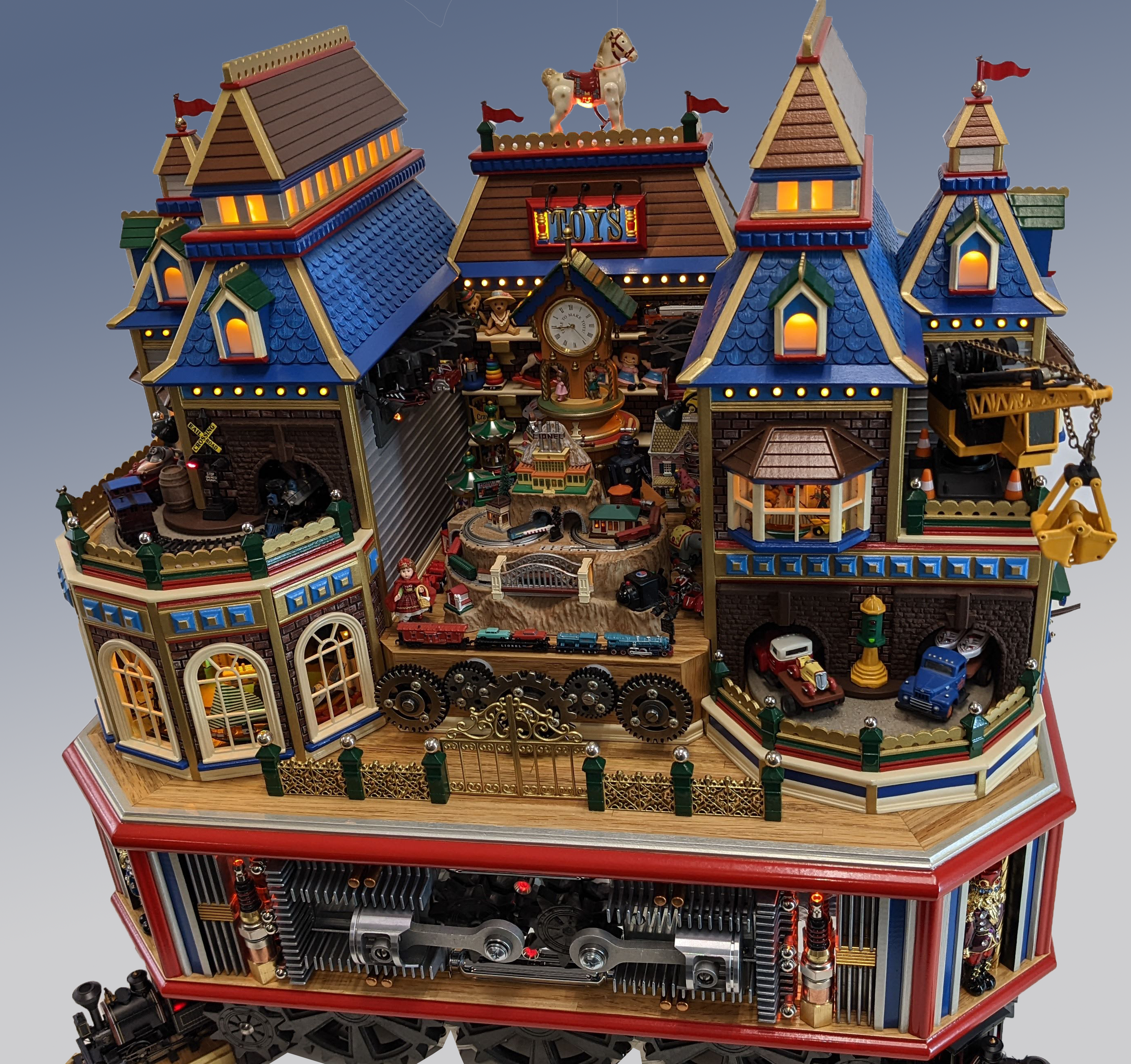 The “Toy Factory” music box is one of Mr. Riley’s most ambitious projects. It took ten years to fully design, and to collect all of the wonderful animation components. The scene includes moving trains, cars, gears, pistons, a crane, and more. Watch a video of the Toy Factory in action. 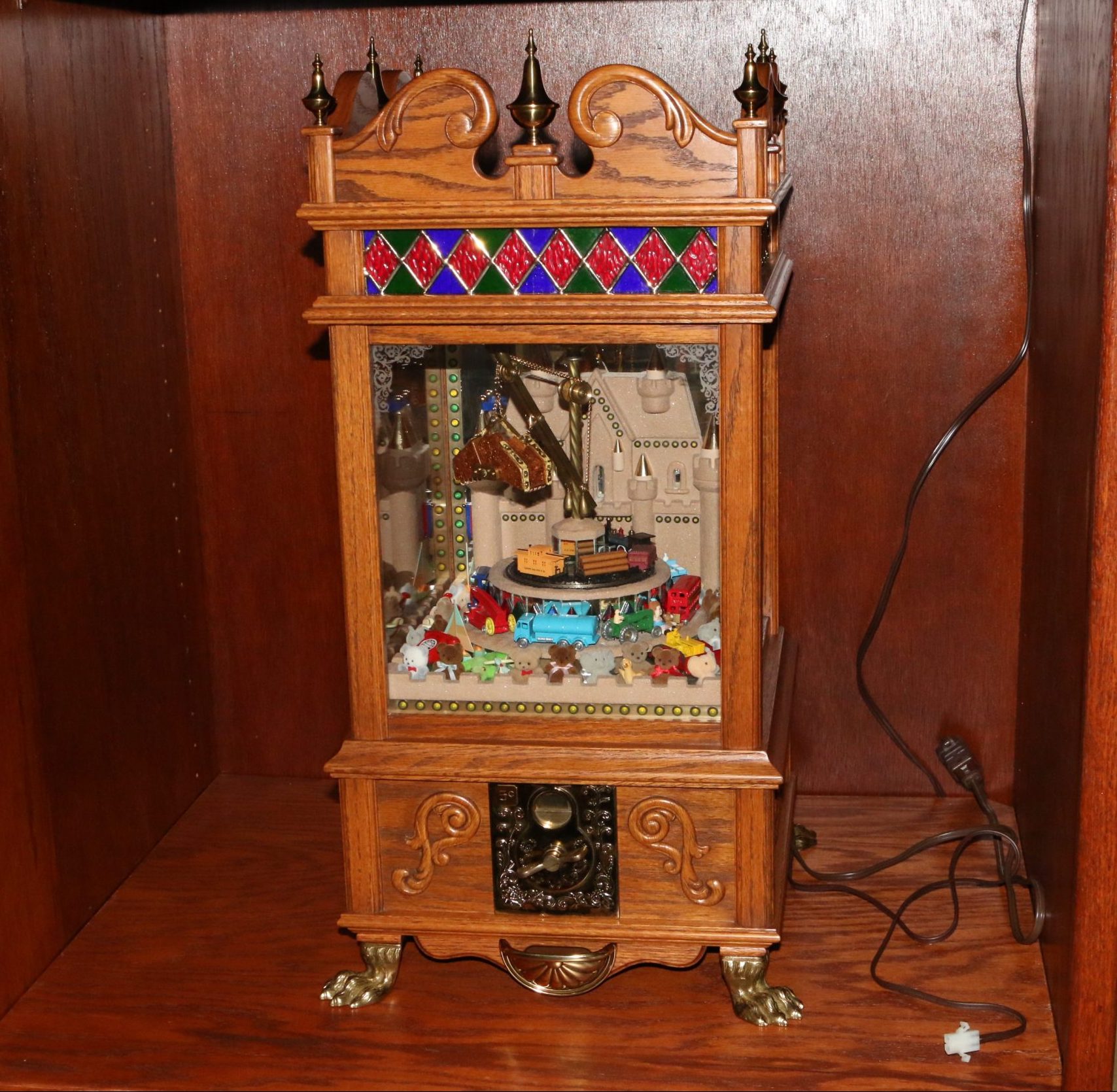 Video of the Music Boxes

These intricate machines need to be seen in action to be truly appreciated. Watch a YouTube video that was taken while some of Don’s impressive animated music boxes were on display in the Miniature Engineering Craftsmanship Museum in Carlsbad, CA. 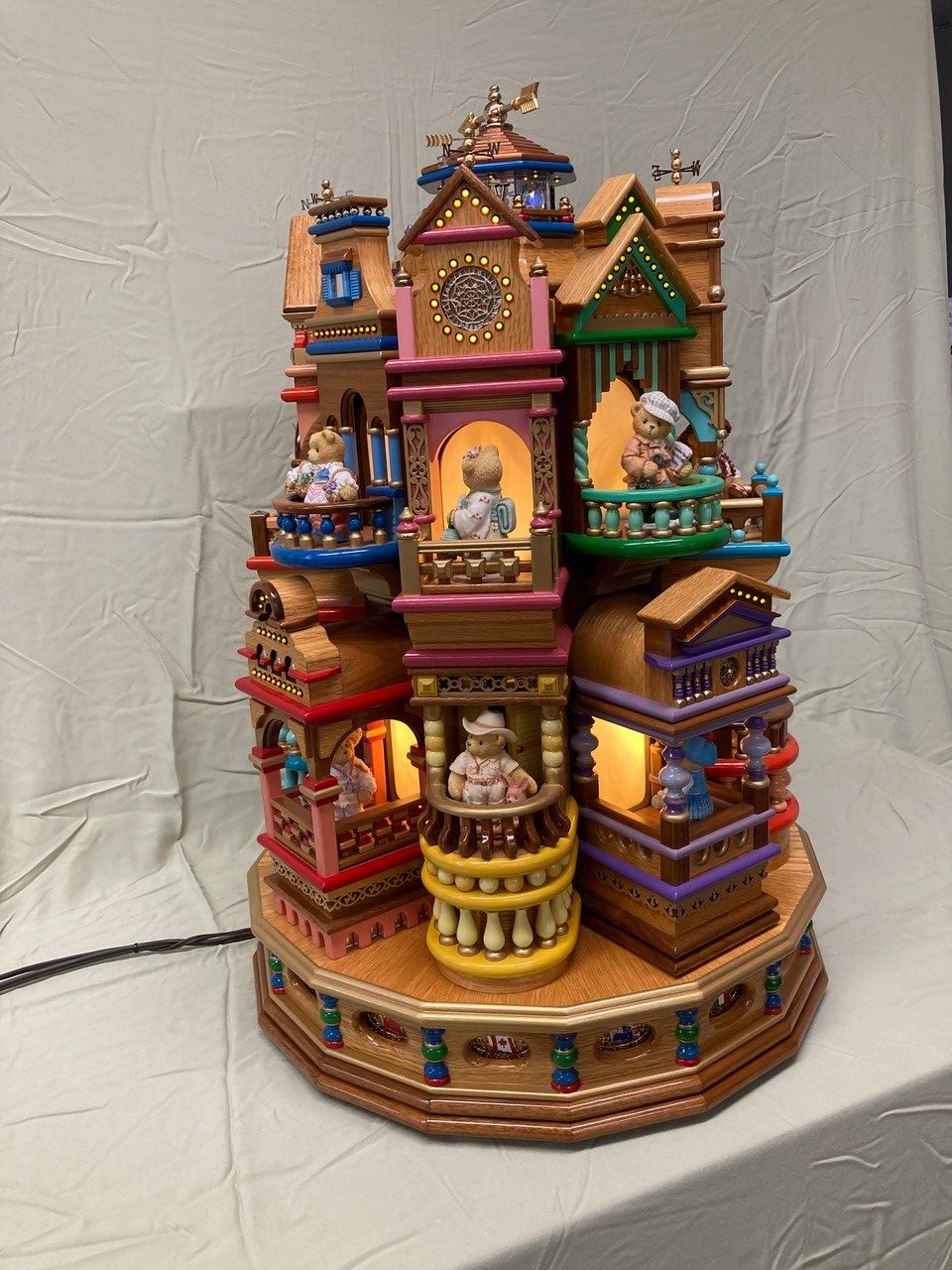 This music box is called, “Around the World.” 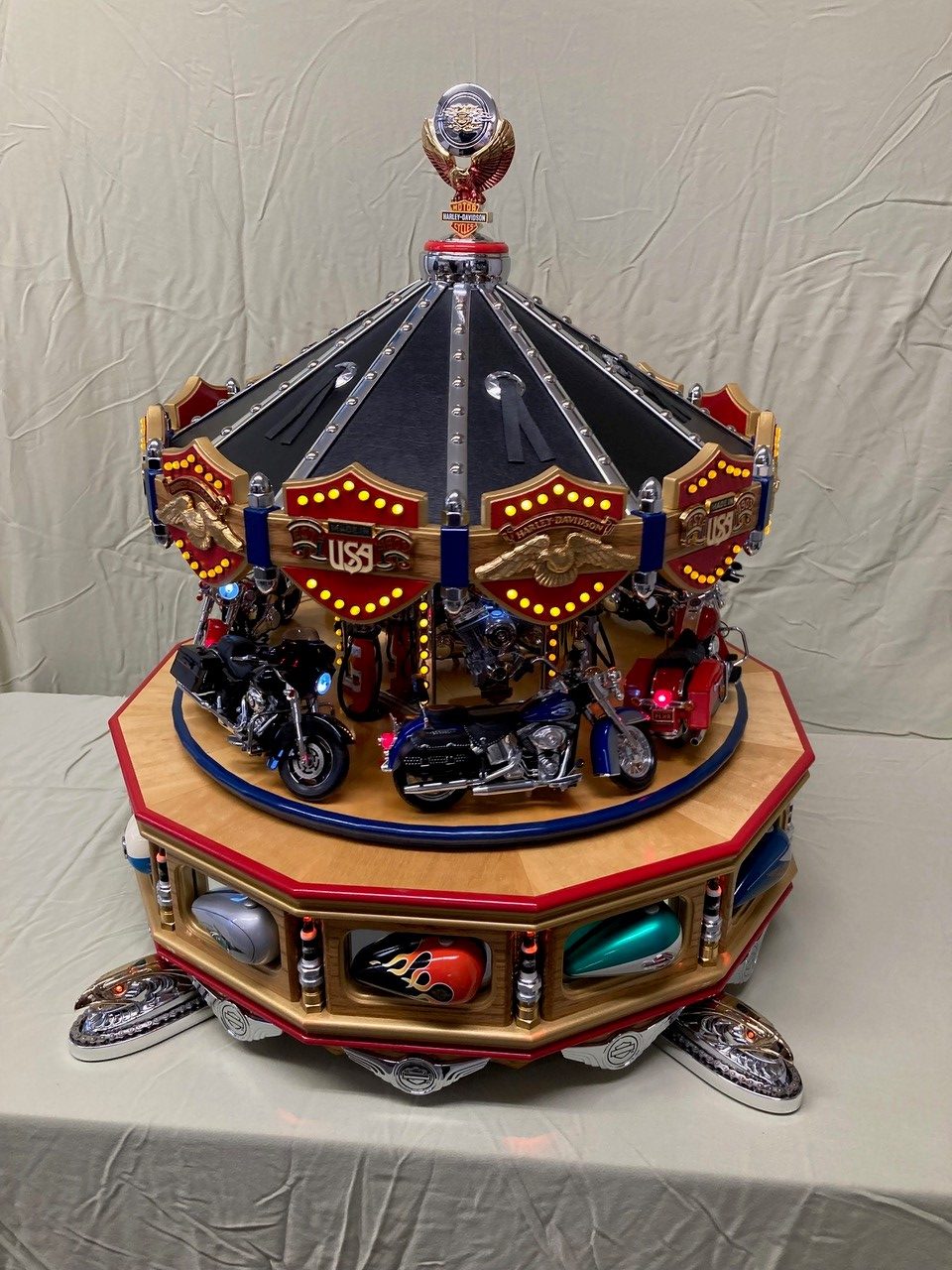