Chuck Hoggarth stands in front of his home with his collection of large scale construction equipment models. This Father’s Day display in 2006 attracted quite a bit of attention in Chuck’s neighborhood, and even brought out the local TV news crew.

From Ford Motor Co. to Building His Own “Big” Rigs

Chuck Hoggarth has lived in Michigan all his life. Born in 1931, Mr. Hoggarth was 74 years old when his work first caught our attention in 2006. Chuck had worked at Ford Motor Company for 46 years, and retired in 1994. He has worked with wood for the past 30 years. However, he only started building large wooden models of construction equipment around 1998.

Chuck gained his woodworking experience by building cabinets for himself and others. In fact, he has added several thousand dollars worth of oak to his own home in the form of cabinets, trim, and stair railings.

Chuck also owned a backhoe for about 5 years in the 1970’s, and did some plumbing jobs with it. That experience spurred his interest in heavy equipment. Chuck didn’t build his models to sell, and still owns the entire collection. Although, the models now take up a lot of space in his home. Chuck’s garage shop houses five of the projects, while three reside in the bedrooms, one in the living room, and the last in the family room. When asked if he ever planned to sell any of the projects, Chuck laughed and said, “I have to do something with them, I’m running out of room.” 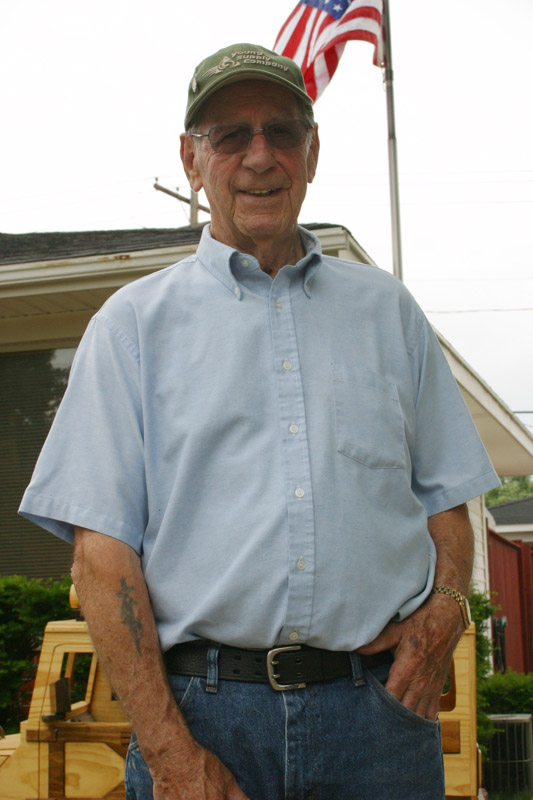 Chuck Hoggarth worked at Ford Motor Company for 46 years before retiring. Now he builds his own scale model construction equipment. 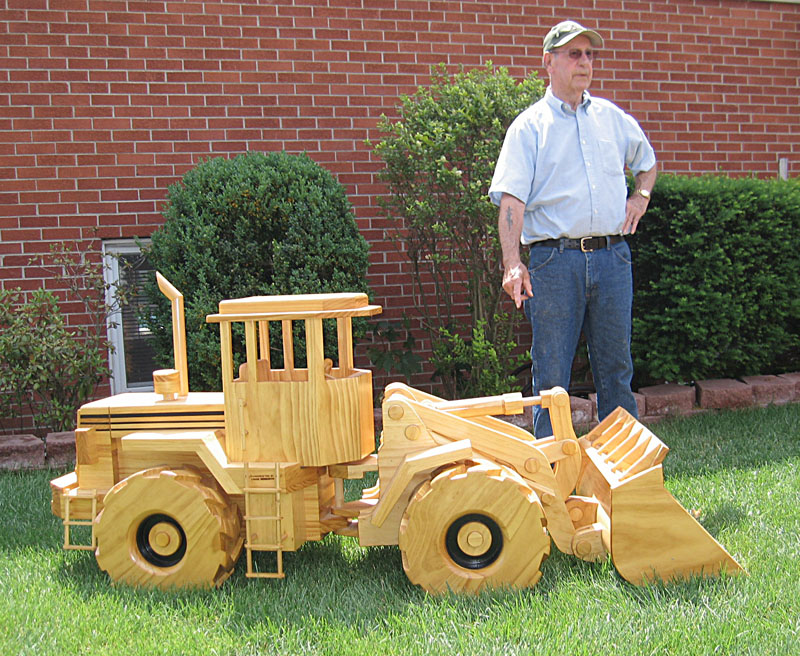 How It All Began

After Chuck retired from Ford, he started looking for something challenging to make. He found plans for a number of heavy equipment projects available from a company called Toys ‘N Joys in Lynden, Washington. Chuck ended up purchasing their plans for a bulldozer and a Kenworth truck. However, they were only about 12″ long once completed, which didn’t seem to do justice to the massive machines.

Ultimately, Chuck decided that his projects needed to be bigger for two reasons. He wanted the projects to be more challenging to build, and he wanted the construction equipment to give the proper impression when viewed. From then on, Chuck scaled all the dimensions on his plans up in size by a factor of four. The resulting collection of large scale models is very impressive. 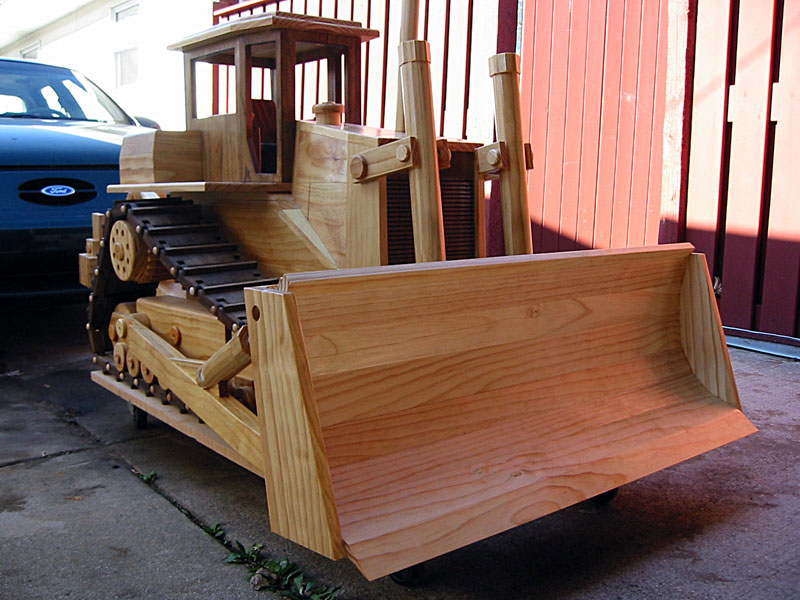 Relatively speaking, this scale model bulldozer is huge. Parked in front of a full-size Ford, viewers can better appreciate the size of this model. 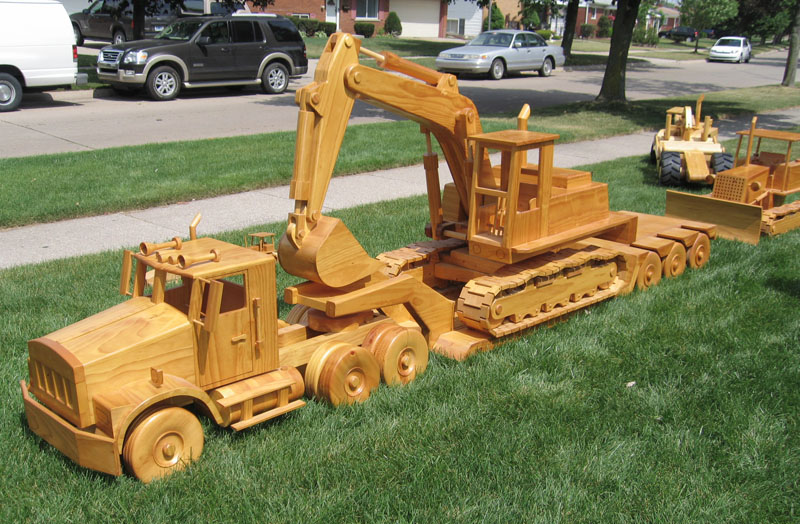 Chuck’s sizeable wooden Kenworth truck tows a lowboy trailer, which is hauling his scale model excavator. From front to back, this setup measures 12’ long, making for an impressive display on Chuck’s front lawn.

Chuck displayed some of his models at a local show at Heritage Park in Taylor, Michigan on Father’s Day in 2003. He then took them to a construction show at the Novi, Michigan Expo Center in 2005, where they attracted quite a bit of attention. “Everyone did a double take when they walked by them,” Chuck recalled.

In 2006, he displayed all the models on his front lawn on Father’s Day, and had neighbors and strangers stopping for photos. The local NBC TV station even sent a cameraman out for a story on Chuck’s work. 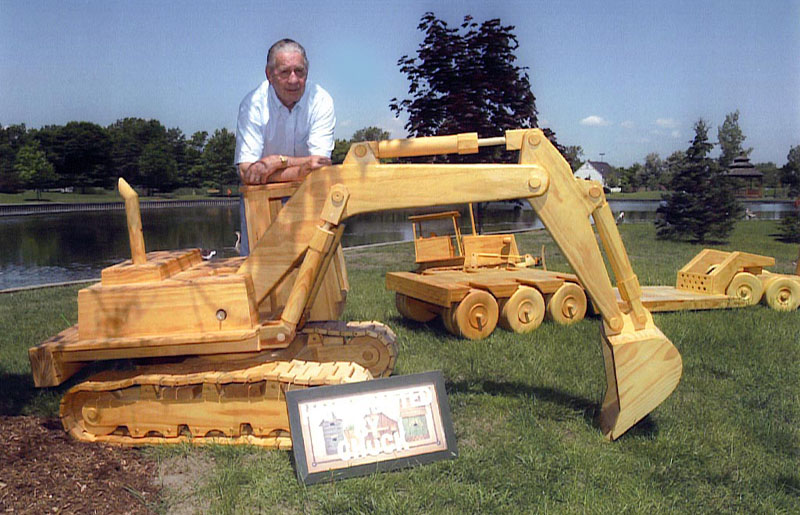 Chuck poses with his scale model excavator. The wooden lowboy trailer and a bulldozer are parked behind him.

All told, Chuck Hoggarth has handcrafted eleven large wooden models of construction equipment. Each one was made from sugar pine wood that is free from knots. A single model can take up to 8-9 months to build. The largest is a Kenworth truck and trailer that is 12′ long and 3′ high. Chuck’s scale model Hummer is also quite large at 4′ high, 4′ wide, and 7′ long. He has also built two large excavators, a high track dozer, a mining truck, an articulated tractor, a front end loader, a bulldozer, and a scraper.

At the time of this writing, Chuck was working on a fishing trolling boat that would eventually float on display in his swimming pool. He would also like to build a model of a backhoe similar to the one he operated many years ago. The moving parts of Chuck’s models actually function, and the tracks and wheels turn. He considered motorizing some of the functions, but decided to keep everything moveable by hand to keep all the parts wooden. 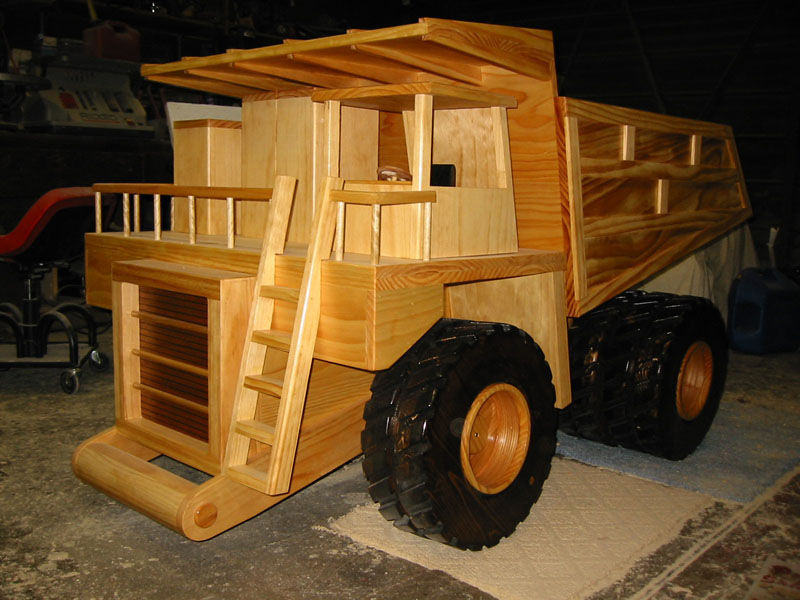 Although it’s technically a scale model, this wooden mining truck is enormous. 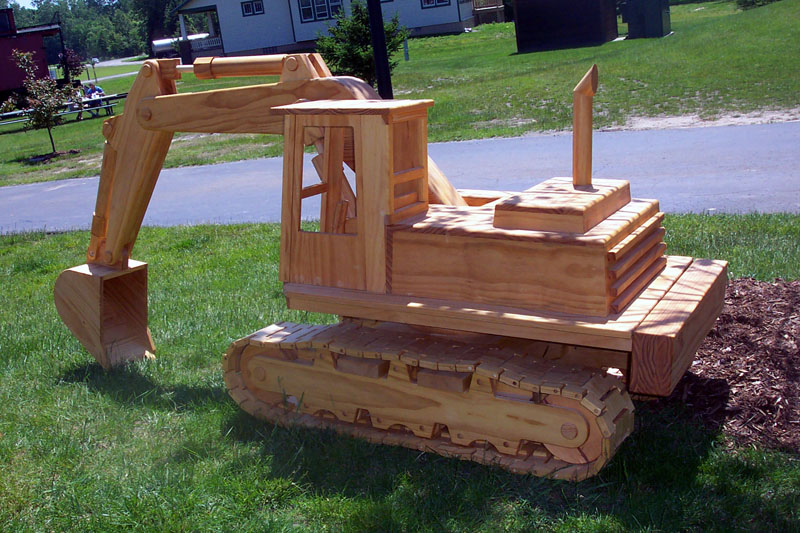 All of Chuck’s models have been left in their natural wood, rather than painting them. That way the beauty of the wood itself is maintained. The models were given a clear finish of tung oil, and finally a tough coat of clear polyethylene to protect them. To build the parts, Chuck’s garage contains all the basic carpenter’s hand tools—plus a table saw, band saw, lathe, eight different routers and more. 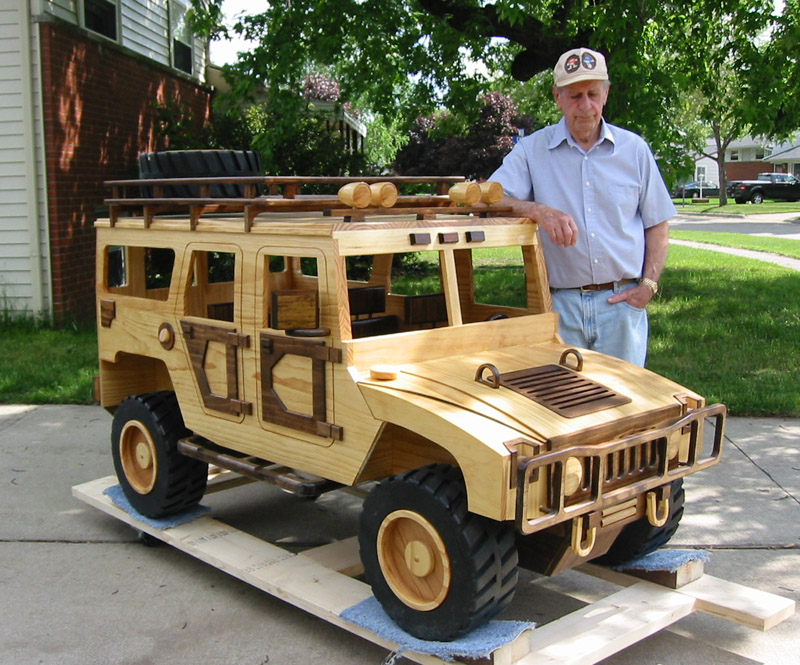 This wooden Hummer model looks almost big enough for Chuck to jump in and drive away. The model is 7’ long and 4’ high. Some of the wooden pieces were stained dark for contrast. 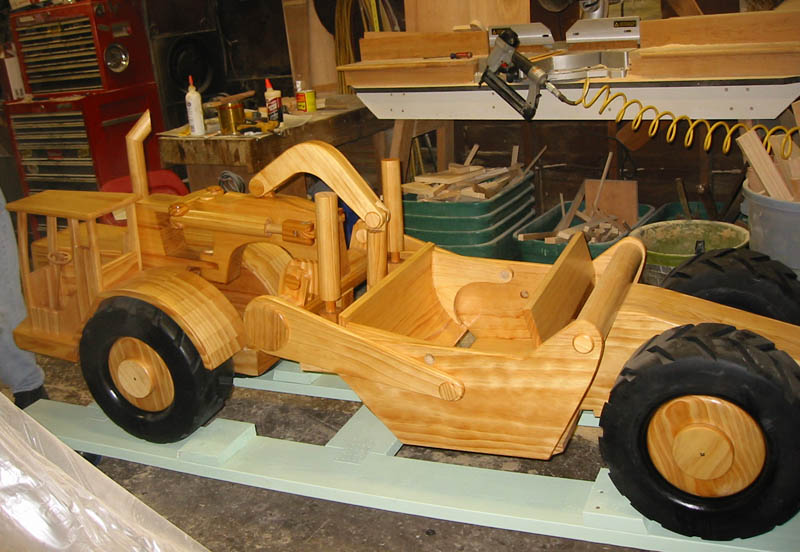 A wooden scale model scraper sits in Chuck’s shop. Some of his woodworking equipment can be seen in the background.