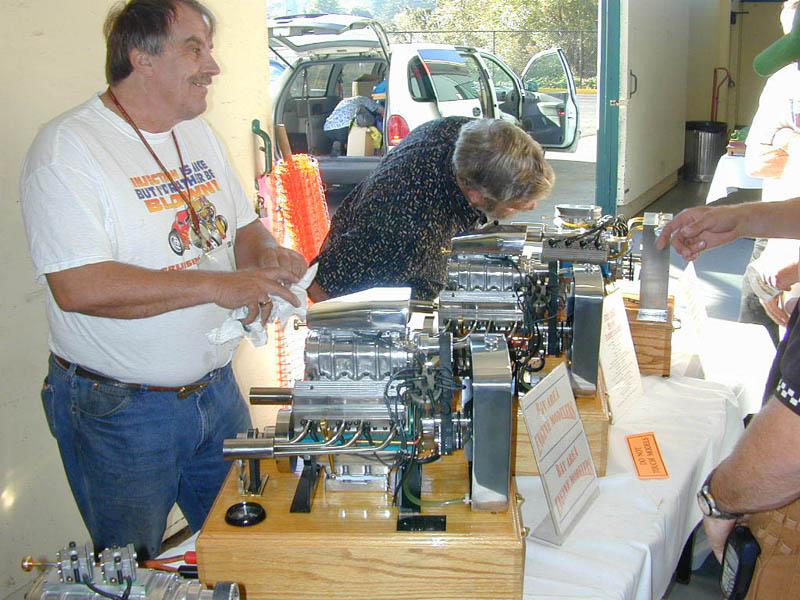 BAEM club members display their engines at a model engineering show in Oregon. These supercharged V-8’s attracted a lot of attention, as did other engines on display. Their large, active club can always be counted on for a good display of engines at west coast events.

The Bay Area Engine Modelers (BAEM) is a club for those interested in building, running, and discussing internal combustion engines. They have a large membership in the San Francisco Bay Area, but also have associate members all over the country and world. By gathering such a large group of people with varied skills and interests, members can share a wealth of information in a fun setting. Perhaps more importantly, though, is the fact that creating such a cohort improves the level of craftsmanship for every member far more rapidly than any individual could achieve alone.

The BAEM in particular is an excellent example of how well this type of organization can be run. Several years ago, Robert Washburn, the late publisher of Strictly I.C. magazine, asked the BAEM group to describe how their club was formed. Mr. Washburn was writing an article aimed toward helping other modelers who were thinking about forming their own clubs (it should be noted that Robert and his wife, Frances, were awarded the 2007 Joe Martin Foundation Lifetime Achievement Award). The following information about the origin and operations of BAEM was gathered from an article submitted by then club secretary, Dr. Bob Kradjian, and has been updated and edited by the Craftsmanship Museum staff.

Getting the Club Going

In 1993, Gordon French wrote an article on camshaft grinding which was printed in Stricly I.C. magazine, Issue No. 32, April/May 1993. Several Bay Area engine enthusiasts who were already members of the local steam power organizations—and subscribers to Strictly I.C.—would read Gordon’s article. Upon reading the article, several people asked Gordon to start a club devoted to building miniature internal combustion engines. Now, Gordon himself thought the idea, “would never succeed,” but in order to stop the nagging he asked Robert and Frances Washburn for help. The pair sent Gordon a set of mailing labels for Strictly I.C. members in the local area. With this information, Gordon mailed meeting notices to eighty addresses, made some phone calls, fielded a raft of return calls, and waited.

The first meeting was held on December 17, 1993. It was an instant success with over 30 attendees. The response was so positive that the group decided to meet again the next month, and the next month, and so on and so forth. In short, the group has never stopped meeting from that time to the present! 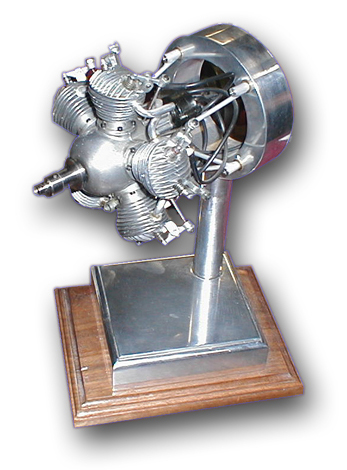 A Morton 5-cylinder radial aircraft engine made by a BAEM member.

At the outset, a common question for the attendees was, “What does the group plan to do?” The answer was published in an early newsletter: “Build, run, and tune miniature internal combustion engines.” By the third meeting, the mailing list had grown to about 100 names. Early on, the fledgling club had no formal organization. Gordon would simply pass a hat among the interested parties to collect the costs of sending out the newsletter—which came to about 50 cents per letter at the time.

Before the group was a year old, it became apparent that they were in need of at least some semblance of organization. As a result, three officers were designated: President, Treasurer, and Secretary/Newsletter Editor. First dues were established at US $25.00 per year. This was chiefly to cover the cost of the newsletter, and to gain insurance coverage by joining the Early Day Gas Engine and Tractor Association (EDGE&TA).

In the beginning, the first three gatherings were held between a machine shop and a restaurant with a meeting room. The fourth club meeting was upgraded to an aeronautical museum in Oakland. A more permanent meeting place was procured when club member Paul Bennet offered his race car fabrication shop for use in November, 1994. Aside from field trips and swap meets, the club met there for over five years. Since then, meeting venues have rotated to accommodate club members living across the Bay Area. Their current meeting times and venues can be found on the club website. 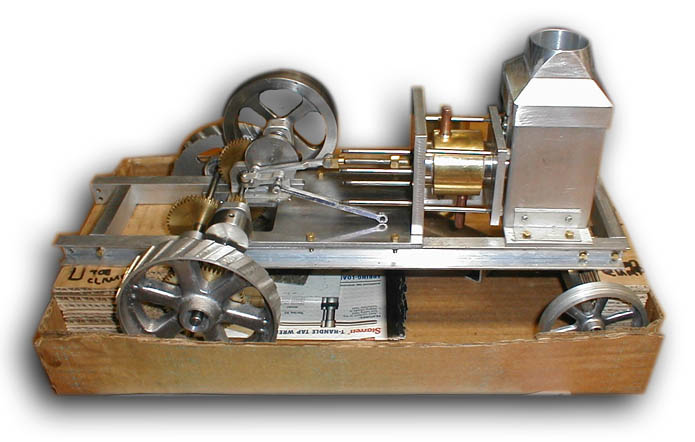 A tractor with Stirling engine made by a BAEM member.

Meetings That Keep People Coming Back

Notices from the BAEM club stress that visitors are welcome at all meetings. The meeting structure itself is very informal. The president begins by asking members to quiet down, and then seeing if there are any visitors. All visitors in attendance are asked whether they would like to join the club. Essential club business is then dealt with as quickly as possible in order to get the truly important matters. The important matters, of course, consist of diving into all aspects of miniature I.C. engines. Nothing will kill a club more quickly than having meetings dominated by endless discussion, and bickering over trivial matters. The meetings have to be enjoyable for everyone in attendance, otherwise the club will not last. Following these quick formalities, a call is made to describe any “first pops” since the previous meeting.

A “first pop” refers to the completion and successful running of a new engine. Such an auspicious event is given the due respect of all members, as everyone understands the commitment and work which precedes that point. At every meeting, members are encouraged to bring with them any work in progress, new projects, finished engines, tooling, or anything else they believe will be of interest to the group (and to which they have bragging rights). There is usually a table set up in the meeting venue for the purpose of displaying these items. The collection of things brought by members are referred to as “bits and pieces.” If a member has a specific area of expertise, such as silver soldering or tube bending, they might give a short talk on the subject to pass on some of that knowledge. 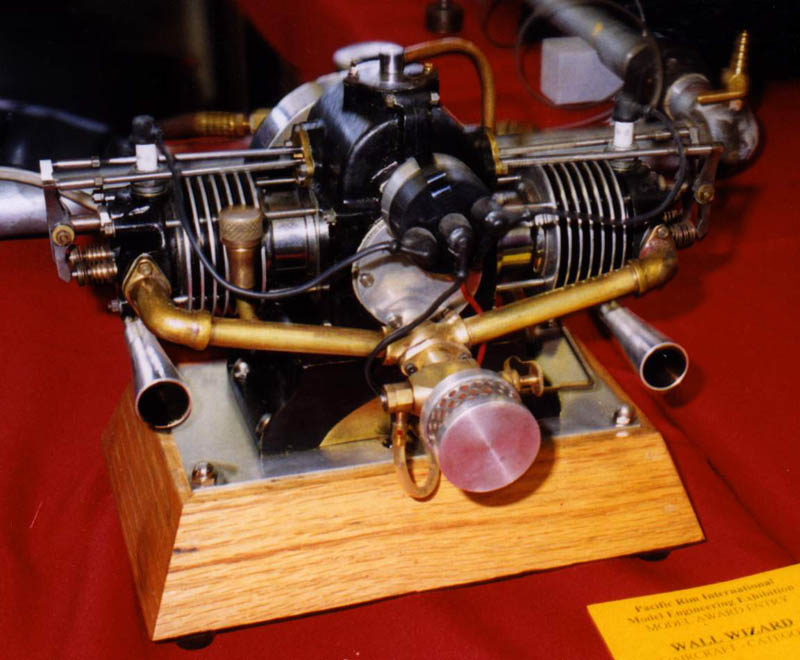 A Wall “Wizard” horizontally opposed engine. Made by a BAEM member.

The Newsletter—the Heartbeat of the Club

The newsletter generally comes out about one week in advance of the monthly meeting. It serves as both a reminder to attend, as well as inspiration for those unable to make it. Many members have collected past issues in binders. By the year 2000, the total cost of each newsletter was about $1.00, which included postage. A hardworking editor would invest about 6-8 hours of work in each issue doing the writing, designing, printing, and eventual mailing. Nowadays, the newsletter can be easily downloaded via the BAEM website free of charge. 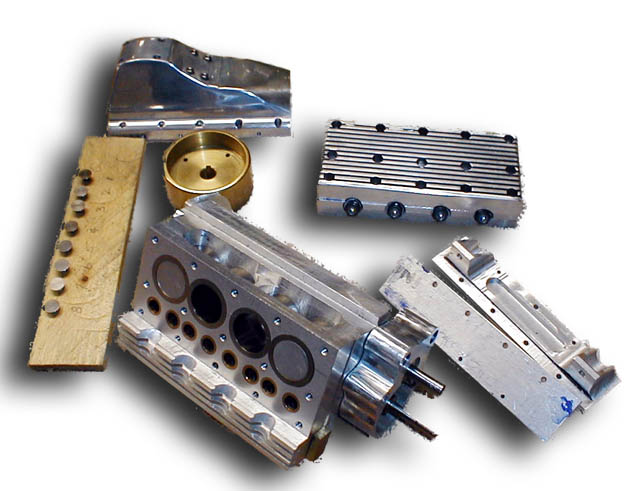 Components of a 4-cylinder in-line engine. Made by a BAEM member. 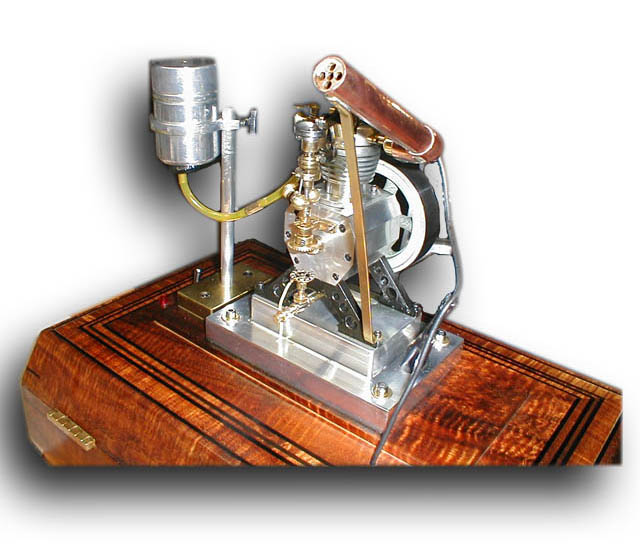 A single-cylinder engine created by a BAEM member.

The club takes trips to different model engineering shows, but also some major automobile shows like the Concours d’Elegance. Members bring displays, and they also demonstrate the running of some of the engines. They have been asked back to every event where they’ve exhibited due to the popularity of BAEM displays. They also average about two field trips a year. Club members visit places like machine shops, restoration facilities, air museums, tool shows, and other members’ shops.

The BAEM also hosts an annual swap meet. This event allows members to clean out the junk in their garage, and replace it with someone else’s junk—at bargain prices, of course! Around Christmas, they have a social evening called a “snack and yack” with pot-luck food and desserts brought by members. Naturally the festivities are highlighted by the running of engines.

More updated information on the Bay Area Engine Modeler’s club can be found on their website. There you can find a schedule of meetings and upcoming events, as well as newsletters dating back as far as November, 2000. You can also see more photos of BAEM work there.

The following statement was taken from the official Joe Martin Foundation press release for the 2016 Lifetime Achievement Award, which was given to the Bay Area Engine Modelers Club:

While past foundation awards have honored individual achievement and contributions to the world of model engineering, this award is presented as a group award to the members of the Bay Area Engine Modelers Club. Through the interaction and sharing of information between members of this active and productive group, advancements in the field of building running model engines have been able to reach people more quickly, benefitting the whole hobby. With over 100 members from not only the San Francisco Bay Area, but from outside the USA as well, the club is a major force in the advancement of Model Engineering throughout the world.

Read the full press release from 2016.