Joe Martin Foundation Craftsman of the Year Award Winner for 2003 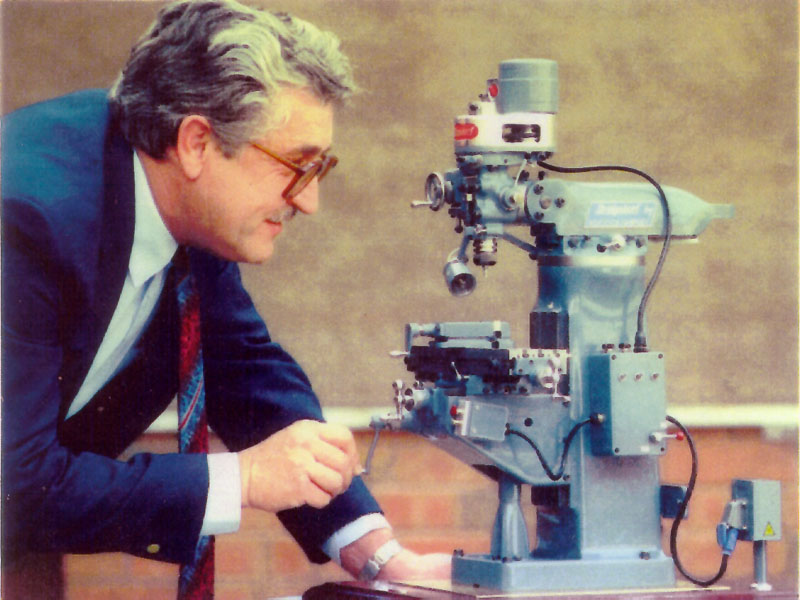 Barry Jordan first came to our attention when his 1/5 scale Bridgeport mill, and the tiny rotary table that preceded it, appeared as the cover story for Model Engineers’ Workshop magazine in December, 1997. Then, in 1998 the Joe Martin Foundation’s first winner of the Craftsman of the Year Award—Jerry Keiffer—got to see Barry’s work firsthand at a model engineering show in England. Over the years, we have followed Barry’s progress as he turned out machine after machine—each to the same superb level of quality and detail.

Now, what impressed Jerry Kieffer the most about Mr. Jordan’s miniature machines, on top of their remarkable quality, was the fact that they all work! These are more than mere models, they are functioning miniature machines capable of the same jobs as their full-size prototypes, just at a smaller scale. In fact, Barry has even used his miniature machines to make tiny parts for even smaller miniature machines! Although it’s difficult to tell from just looking at the finished models, no castings were used in their production. Barry machines all parts from billets of solid metal. 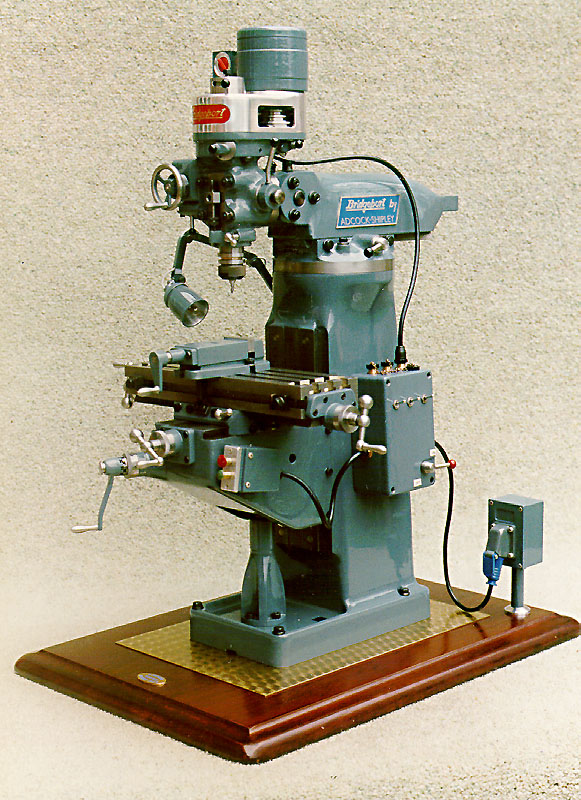 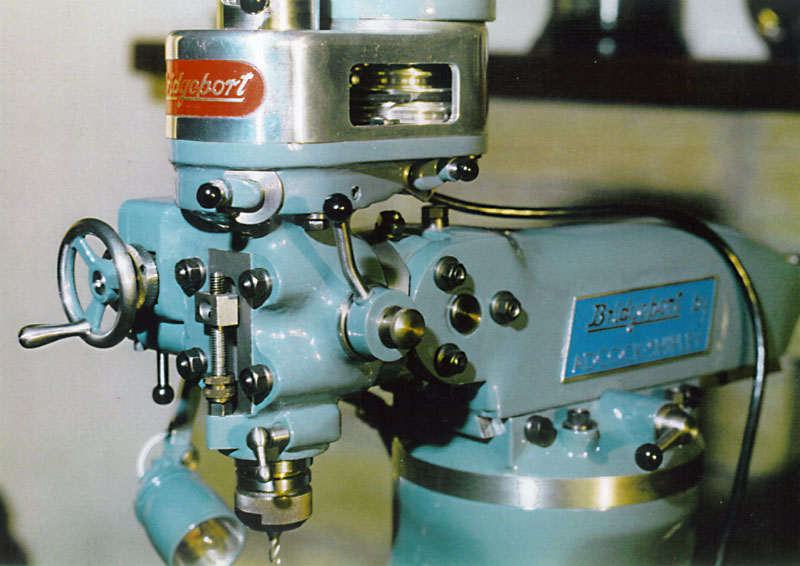 Barry’s 1/5 scale Bridgeport milling machine stands just 23-1/2” high. The machine was made from cast iron billet and aluminum plate—no castings were used. the second photo shows a close-up of the ram and head. Note that this tiny scale machine can perform operations just like the full-size mill.

As a result of his commitment to miniature craftsmanship, Barry Jordan was selected by Joe Martin to become the seventh recipient of the Craftsman of the Year Award in 2003. Mr. Jordan attended the 2003 North American Model Engineering Society Expo in Detroit to receive his award, and a check for $1,000.00.

While at the NAMES Expo, Barry also displayed some of his prize-winning miniature machines at the Sherline Products booth. This was a rare opportunity for show goers to see Barry’s outstanding models firsthand in America. We thank Barry for making the long trip, and for sharing some wisdom along the way. 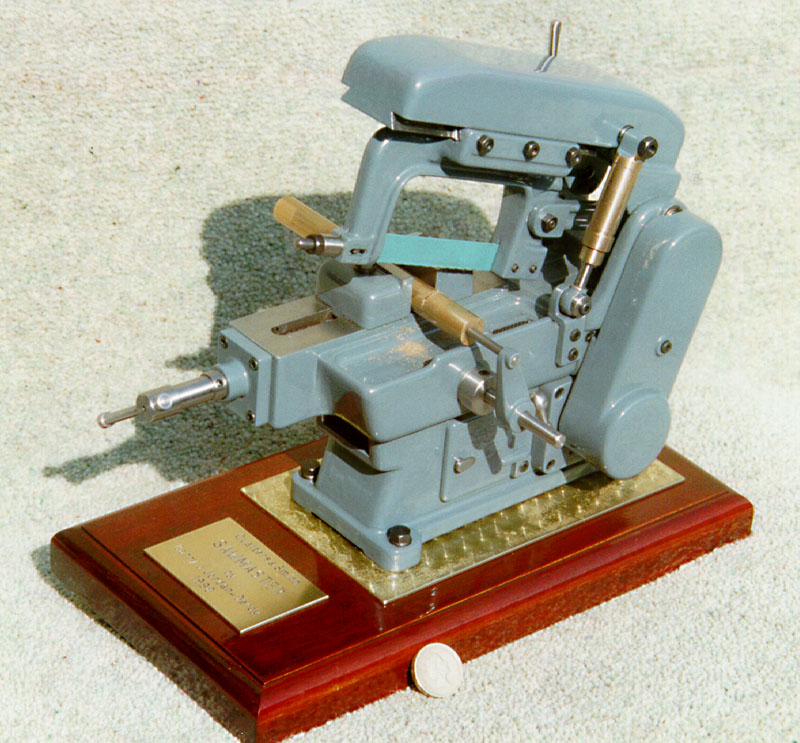 This 1/5 scale Qualters and Smith Sawmaster 6” power hacksaw was built between January 6 and March 11, 1999. Barry made it from cast iron billet, aluminum sections, mild steel stock, and without the use of any castings. A coin at the base provides scale reference. 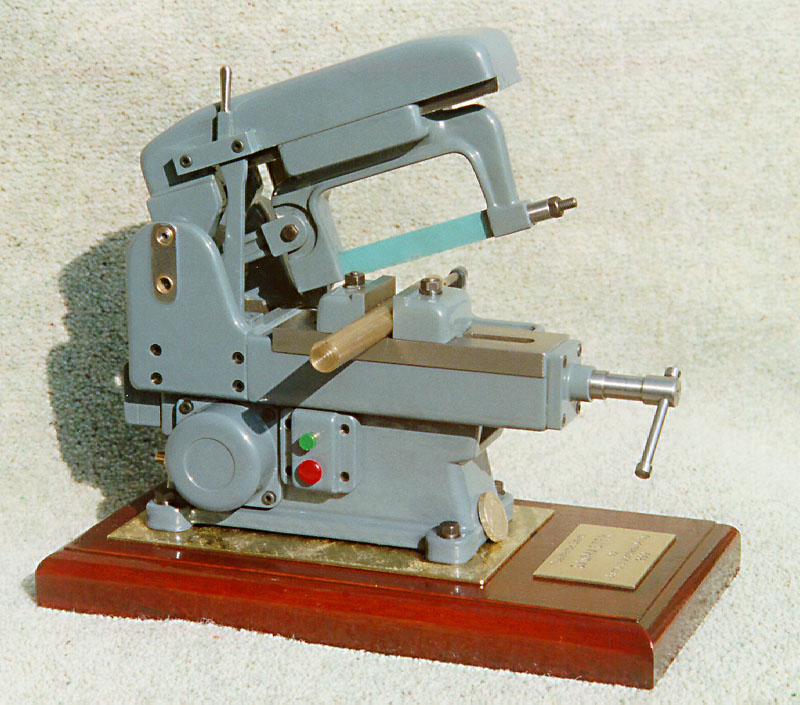 Here the miniature power hacksaw is shown ready to cut a brass bar. After all, the miniature is fully functional! Barry used photos from a 1968 catalog for reference in its construction.

Barry J. Jordan was born in Derby, England in 1945. He left Joseph Wright Art School at 15, and secured an apprenticeship with Rolls-Royce Aero Engine Division, Derby in the experimental department. After developing a range of ultrasonic crack detection equipment used in non-destructive testing, Barry formed his own company in 1977 to manufacture this equipment. Unfortunately, in 1994 Barry was diagnosed with an inoperable brain tumor.

Fearing the worst, he sold the business to Rolls-Royce and Associates. Berry then bought a Myford Super 7B lathe, a Raglan milling machine, built himself a workshop, and went back to his boyhood love of model engineering. Fortunately, his tumor has responded well to medication, and he was still turning out wonderful models from his home shop at the time of this writing. 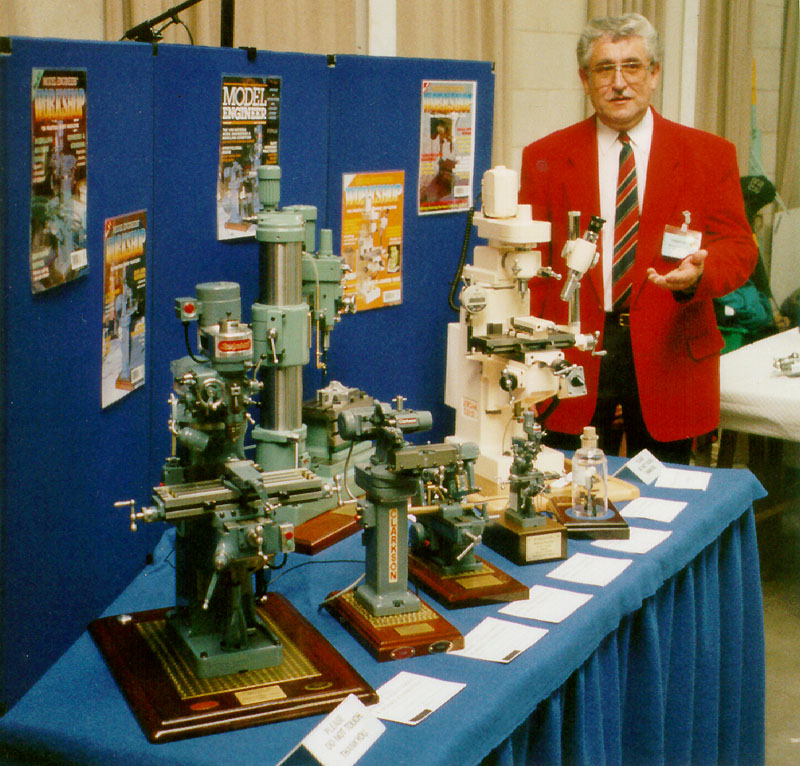 Barry is shown here with several of his model machines at an engineering exhibition in England. Magazine cover photos featuring his machines adorn the blue backdrop.

Barry’s first project was a one-inch scale miniature traction engine. Then, looking for a theme that diverted from the models typically found at exhibitions, Barry decided to start making classic machine tools in miniature. In 1997, he produced his first—the award-winning 1/5 scale Bridgeport BRJ mill. Barry’s model Bridgeport took Best in Show at Harrogate, England in 1998, and has received many other awards in the UK since.

At the time of this writing in 2003, Barry was working on his eleventh miniature machine—the Swedish made Tricept 805 five-axis machining center. Even for a craftsman of Barry’s caliber, this is quite a challenge. Regardless of the difficulty, Barry noted that this hobby has been an important part of his therapy. 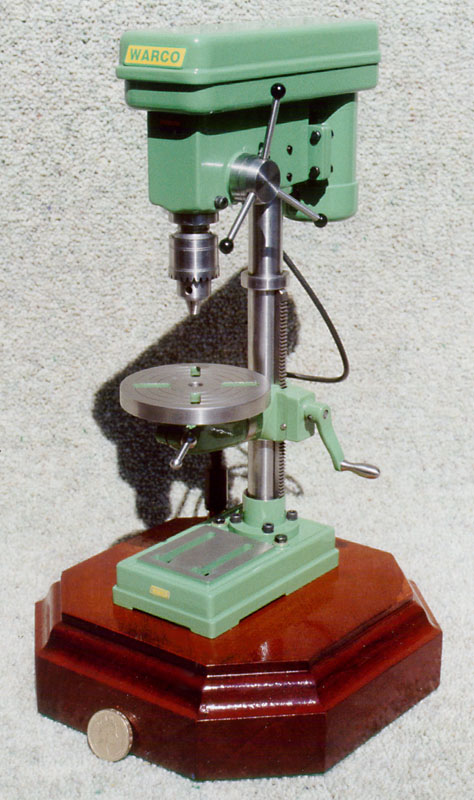 A coin at the base of Barry’s 1/5 scale Warco hobby drilling machine lends a sense of scale to the miniature. 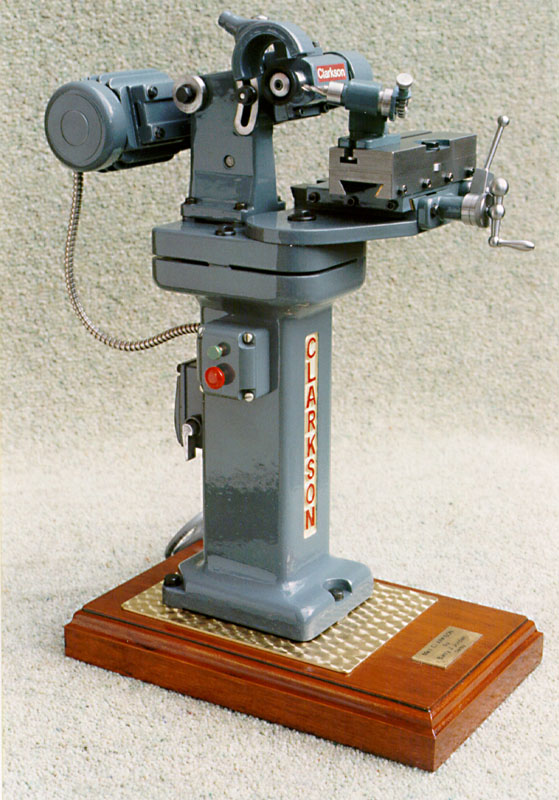 Barry built this MK 1 Clarkson tool and cutter grinder at 1/5 scale. It stands 14” high, and was built between November 24, 1997 and March 18, 1998. No castings were used, and the grinder was made from cast iron billet, aluminum sections, and mild steel stock.

Building the 1/5 and 1/14 Scale Bridgeport Mills

Bridgeport milling machines have had a special appeal for me since I built my award-winning 1/5 scale model back in 1997. I have now built a second model Bridgeport, but this time it is the ultimate in miniatures at 1/14 scale. This has to be the smallest working BRJ made to date. The overall height of 7.800 inches is from the base to the top of the motor case. Inside the case is an extremely small Swiss-made electric motor. This is rated at 1.5 volts, but I am running it on a 3 volt battery concealed in the base.

In the earlier stages of building the model, I did consider having the motor in the base alongside the battery pack. This would have allowed a larger, more powerful motor to be used. However, because I wanted flexible movement of the head in all directions, and the sliding ram to function as in the full-size machine, I soon concluded that this idea was totally impossible to produce in this scale. So I reverted back to mounting the motor in the correct location as in the full-size prototype. 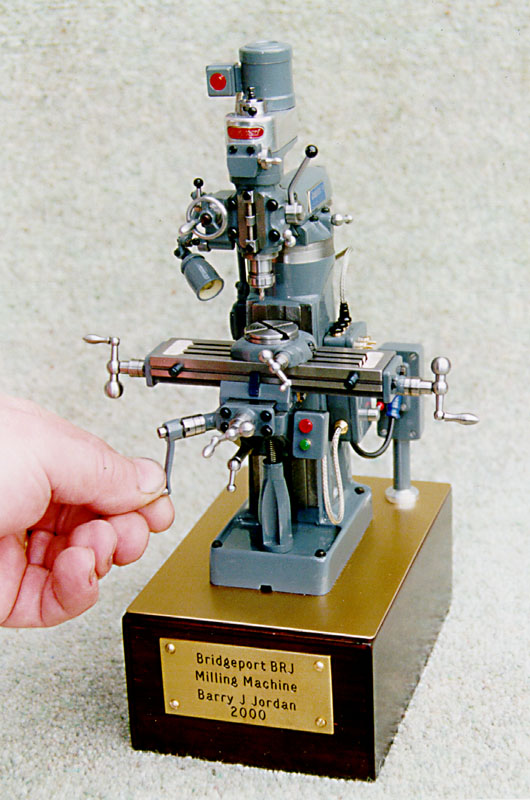 Barry’s smaller 1/14 scale model of the Bridgeport mill was completed in late January 2000. It took 17 weeks (640 hours) to complete. This machine stands only 7.8” high, and was made from cast iron billet material. 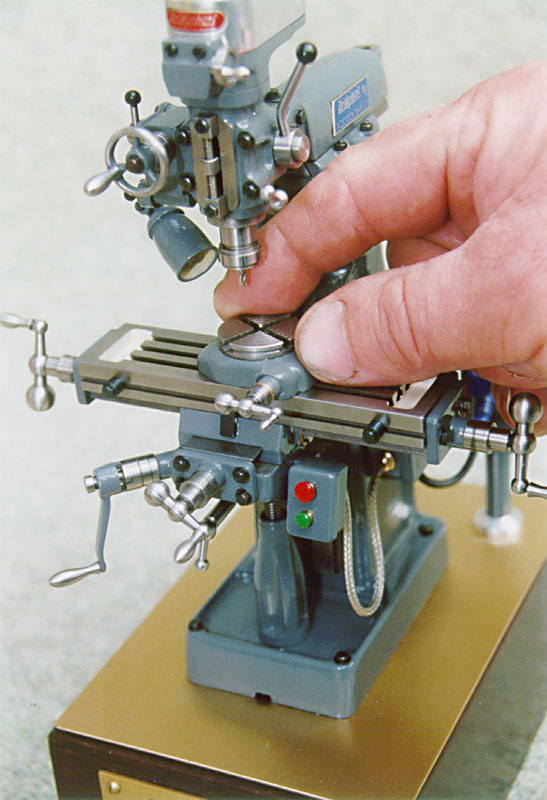 Another view of what is likely the world’s smallest working Bridgeport mill. It runs on a miniature Swiss 1.5 Volt DC motor that Barry runs using 3 VDC.

To complement the model, I have also made a machine vice and a matching rotary table which is .800 inches in diameter. The small table has a ratio of 60:1. Two miniature T-bolts secure the rotary table to the machine. To cut the actual T-slots, I had to make the milling cutters myself, as no commercial equivalent miniature cutters are available. Building this miniature was a challenge which I enjoyed executing to prove a point.

Jerry Keiffer’s beautiful little models (which appeared at Olympia in 1998) were such an inspiration to me that I had to try to emulate his excellent craftsmanship, and show that we British are as capable of precision engineering projects as our American friends. I do not intend to do any further work in this scale, as the parts are too fragile to make working models. Any future projects will be in my preferred 1/5 scale. 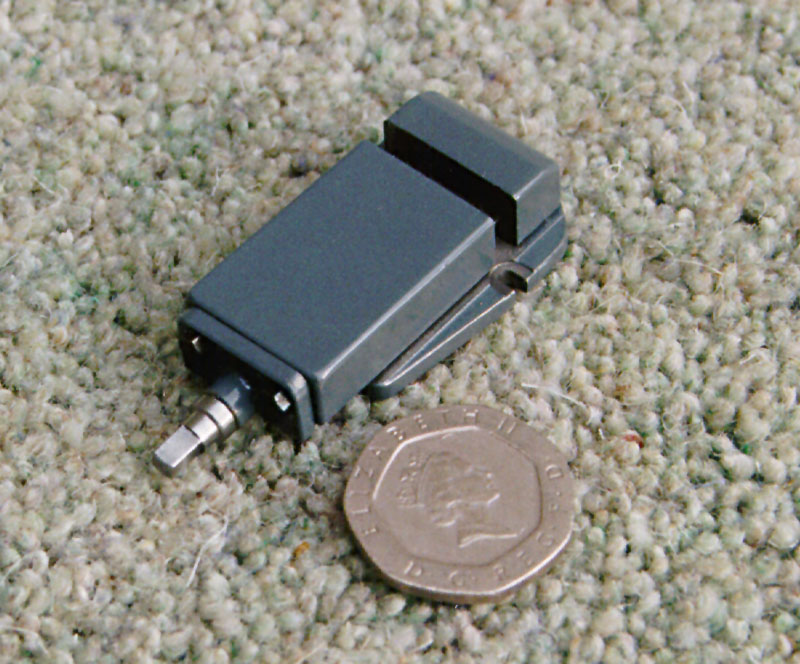 A tiny machine vise that Barry made for the miniature Bridgeport. The coin lends a sense of scale. 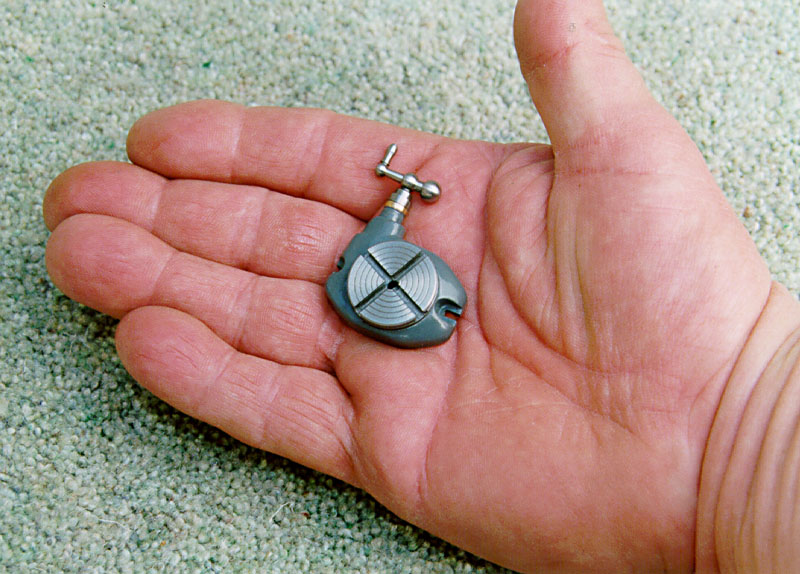 Barry made this tiny 60:1 rotary table to accompany the miniature Bridgeport. He had to fabricate his own tiny cutters to make the T-slots.

Barry also designed and built a miniature Jordan precision milling machine. Not only does this tiny machine work, but he actually used it to make parts for his miniature Fobco drill, and the 1/14 scale Bridgeport! This tiny mill took about 15 weeks to build, between April 29 and August 12, 1999. It’s made from cast iron billet, aluminum sections, and mild steel. Specifications for this one-of-a-kind working mill are included in the following column. 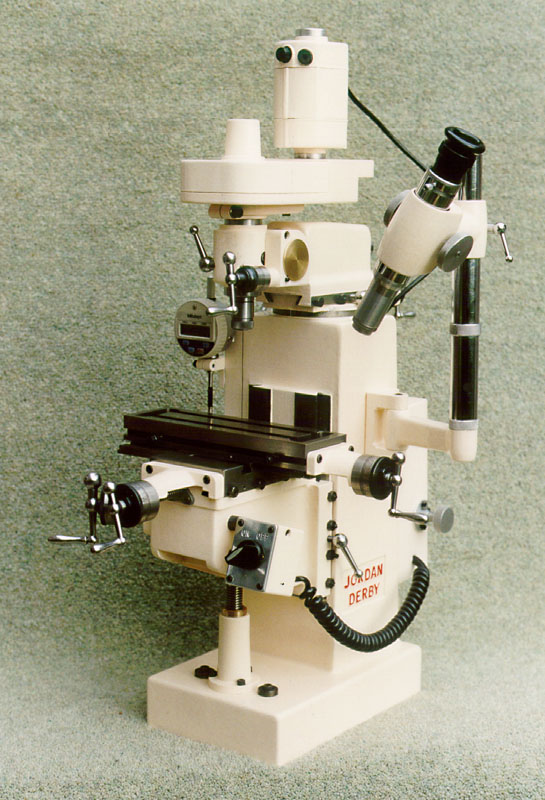 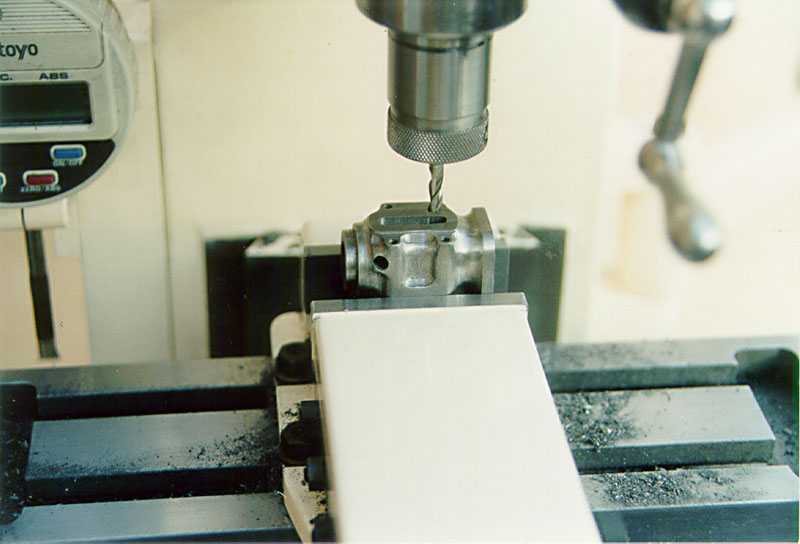 In this photo, the miniature Jordan mill is set up for an operation on the headstock for Barry’s 1/14 scale Bridgeport mill!

Outside of his miniature engineering hobby, Barry also completely restored a 1934 Brooklands Morgan 3-wheeler replica. He took the partially completed project and finished it up himself (including paint) in about 8 months. The restored vintage 3-wheeler could be seen competing at vintage race events, as well as tooling around the local roads.

The 950 cc V-twin engine is connected by a shaft drive to the single rear wheel. The chassis is original, but Barry has brought certain parts up to date for racing—such as adding 8″ disk brakes for better stopping power. Barry said it’s like driving a combination of a car and a motorcycle.

When it rains, you get wet, but the radiator for the V-twin engine right in front of your feet acts as a heater (usually a good thing in England). Also, Barry noted that cornering at speed takes some getting used to. The driver can’t let up suddenly on the gas mid-corner, or it tends to swap ends!

This unique car was affectionately named “Oggy,” in reference to its license number. When driven locally, Barry can be seen behind the wheel—complete with leather WWII flying helmet, goggles, and a large black handlebar mustache. 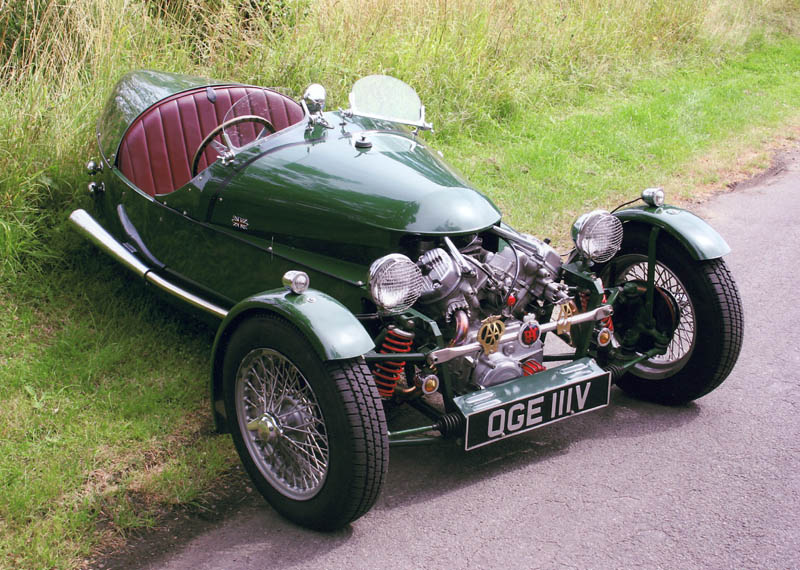 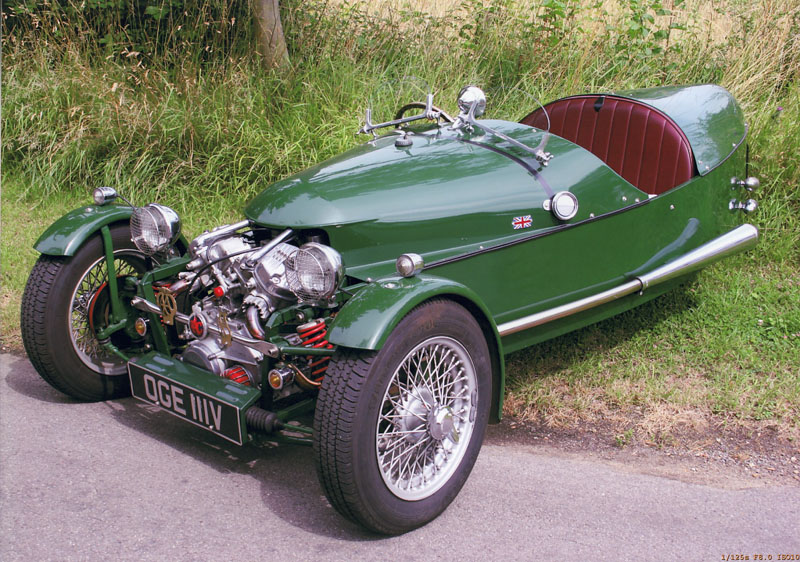