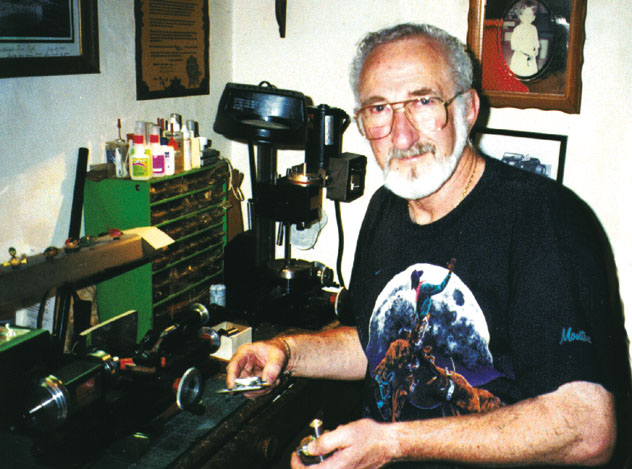 At age 7, Augie Hiscano was already carving model airplanes out of blocks of wood. He went on to win contests in U-control model airplane flying, and eventually got interested in building and super-detailing plastic model cars. In 1964, he won the biggest national model car building contest ever held—the Revell National Championships—which started out with over 500,000 entries at the local hobby shop level. Augie’s tools at the time were no more sophisticated than a Dremel tool and files.

Contest rules prohibited former winners from entering again, so after winning that contest, his interests over the years moved on to building real hot rods, and going drag racing. Augie applied his skills as a craftsman to working on guns, model trains, cars, boats, and tanks—he loved all things miniature. Eventually, Augie found a job with Orange Blossom Hobbies in Miami, which kept him close to the hobbies he loved. He remained there for 35 years as manager until his retirement.

In 1989, Augie was invited back to the National Model Championships in Salt Lake City, as a former winner and special guest. Augie’s return to the event inspired him to take up building model cars again. A change in the rules meant that he could also enter his own work again. However, having been 25 years since his first entry, the level of quality had risen so much that Augie knew his hand tools would no longer be sufficient to build a winner. 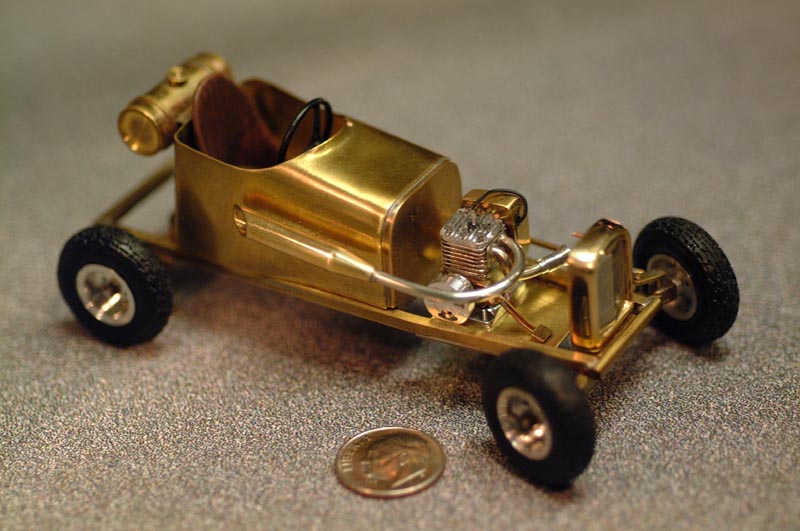 Here is Augie’s interpretation of a dirt track hot rod from the 1930’s. A dime shows the small size of the all-metal model. 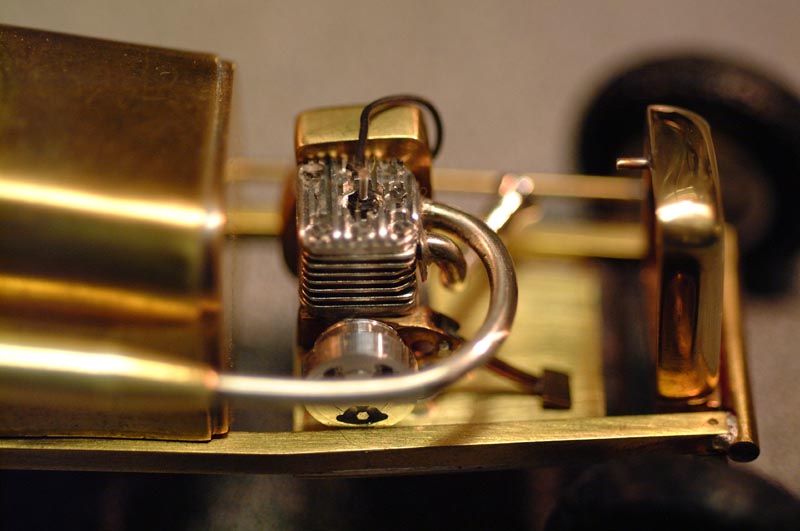 A close view of the tiny engine in Augie’s hot rod.

In 1990, Augie’s wife bought him a Sherline lathe, and he began making machined parts. In 1991, he received a mill, and his entry in that year’s contest—a 1932 Ford Victoria hot rod—won both “Best of Show” and “People’s Choice” awards. In 1993, Augie built what he called, “the best car that never won a ‘Best of Show’ award,” and finished second at Salt Lake City (that car is pictured at the bottom of this page). Determined to build another winner, he went to work on a black ’33 Roadster. It won the 1997 National Championships “Best of Show” award.

In 1999, he came back with an even more detailed 1932-1/2 Ford Roadster, which won “Best in Class (hot rod),” “Best Engineered,” and “Best of Show.” It’s rare in any vocation to find someone whose national championship quality work spans over three decades, but Augie’s did. He took four “Best in Show” awards at the largest national show over a 35-year period. With typical modesty, he gave a lot of credit to his tools saying, “Without tools of this quality, I could not have won in the 1990’s.”

This 1933 Ford Roadster was the “Best in Show” winner of the 1997 Salt Lake City contest. Aside from a portion of a plastic kit body in the rear of the car and the tires, almost every part is scratch-built from metal.

Side view of the 1933 Ford shows details of the handmade 427 engine, and custom turned aluminum wheels. The frame is scratch-built from brass and chrome plated. The front and rear suspension are fully functional.

Augie only had two years of machine shop in high school, so everything he learned came from reading books, talking to other machinists, and just plain experience. When he was younger, Augie built real hot rods, so he knew what went into a car. However, after his return to modeling, Augie preferred working on the 1/25th scale variety. He said, “Today I can make my ‘dream cars,’ and park them in my dining room.”

After his retirement, Augie spent some of his time attending shows that weren’t solely focused on model cars. He expanded his modeling to include boats, airplane engines, steam engines, bikes, and other small models. All of these models share his craftsman’s touch, and a level of perfection that goes down to the degree that magnification is needed to appreciate the smallest details. 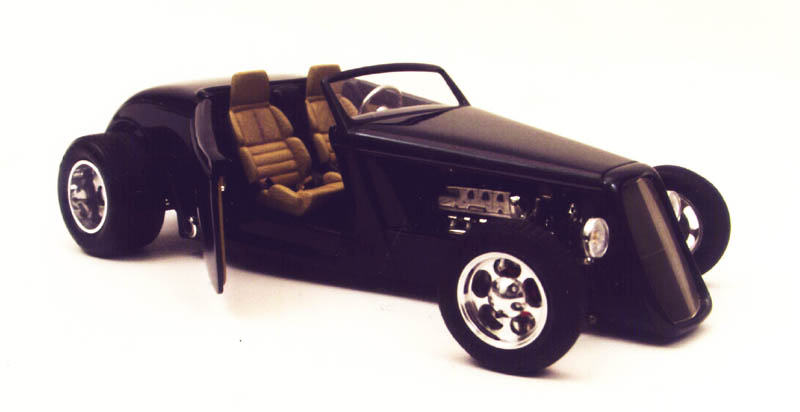 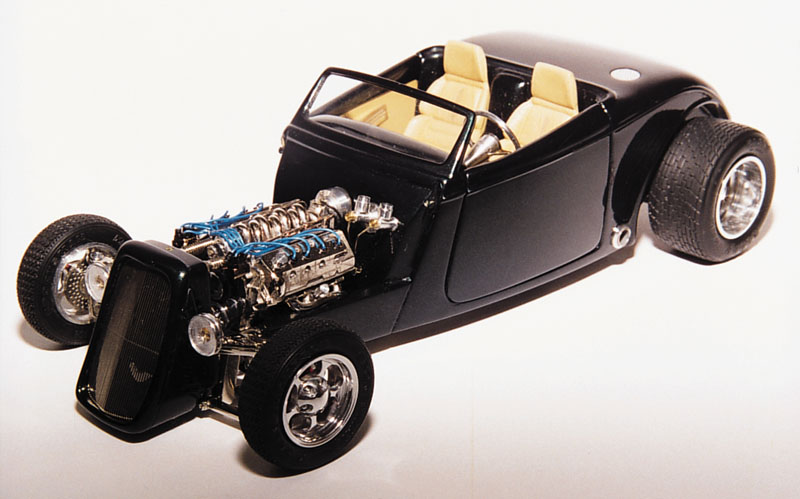 With the hood removed, the detail of the Mustang Cobra engine can be seen. The higher angle also shows some of the interior details.

Augie continued to take his modeling to new levels, and also to pass on what he’d learned to as many interested modelers as possible. Having spent months—even years—working on some of his prize-winning entries, Augie preferred taking on a greater number of smaller projects in retirement. These could be finished in a shorter span of time. During retirement, Augie worked on his models while also traveling the United States in his motorhome, with wife of 51 years, Carol. They attended model shows, and Augie gave seminars on modeling to pass on what he’d learned. It is with great sadness that we must announce that Augie Hiscano passed away suddenly in his home on April 21, 2005. His obituary can be found here.

Augie had just helped complete a new trophy, sponsored by Scale Nuts & Bolts, that was to be presented at the Salt Lake City Model Show for “Best Metal Work.” It would be called the “Augie.” The trophy contained a custom machined 1/25 scale metal wheel that Augie had produced. We hope his legacy of quality will continue to inspire new generations of modelers. 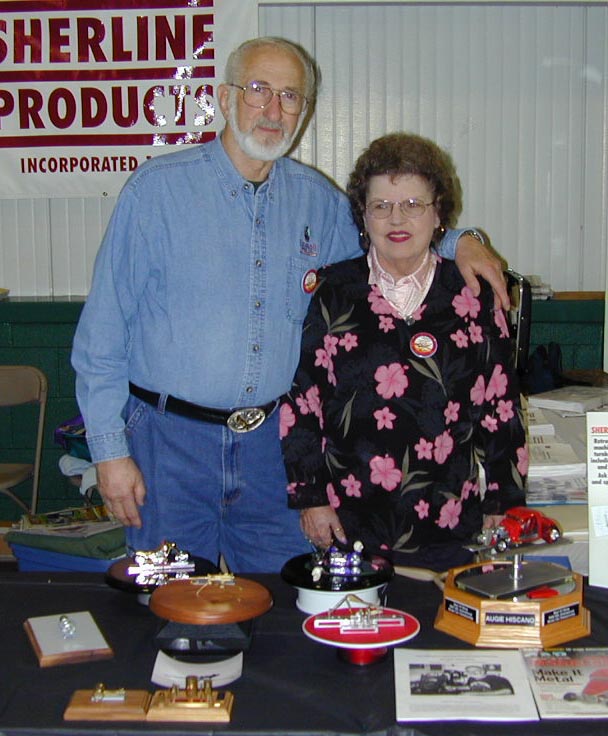 Augie and his wife of over 50 years, Carol, showing off some of his models at the 2005 Cabin Fever Expo in York, PA. Augie was great at getting both kids and adults fired up to take their modeling skills to a higher level. Augie will be greatly missed not only by his many friends, but also by those he taught and inspired in the world of high quality model making. 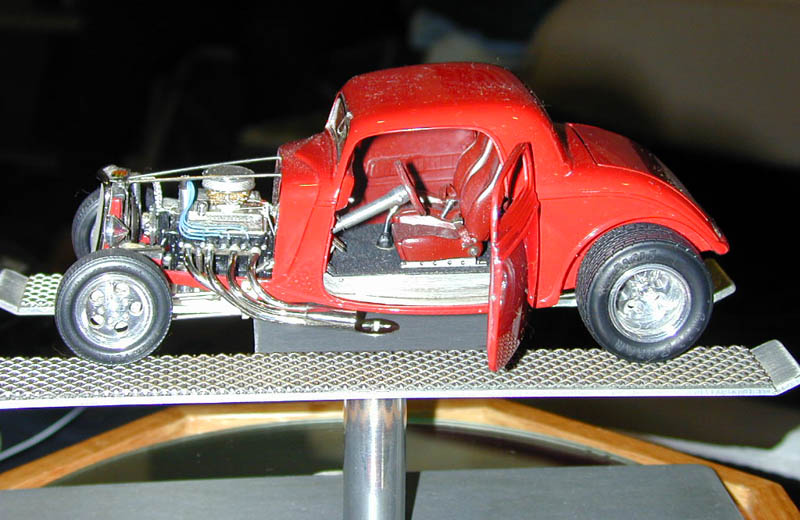 Augie called this, “the best model to never win ‘Best of Show.’” The 1/25 scale Ford hot rod is displayed here on a model hydraulic lift, and includes Augie’s usual high level of detail. It’s a little dusty on top from being on display at the show. Augie left his models uncovered, and would gladly pick them up to show viewers the details underneath and inside.