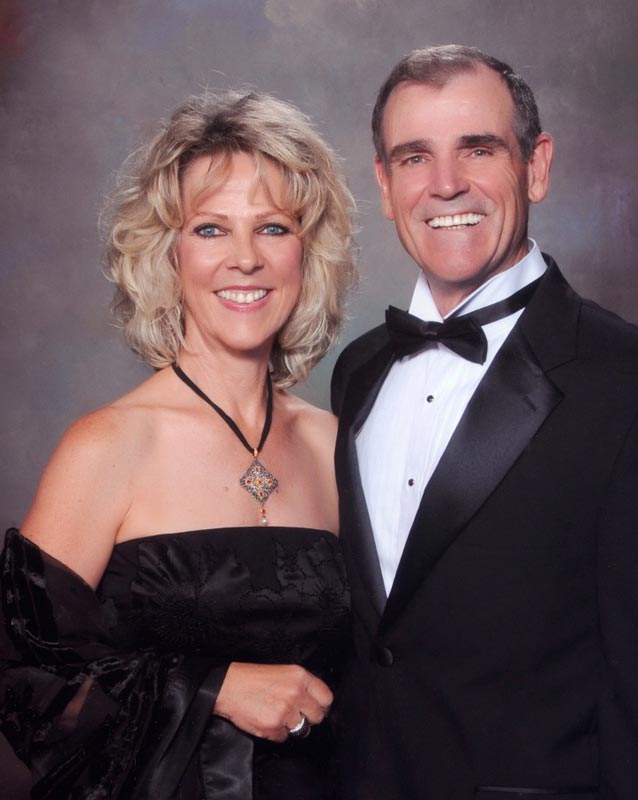 Patty and Allen in a photo taken in 2009 at the Booth Western Art Museum, in Cartersville, Georgia. The Eckmans’ work can be seen on permanent display at the Booth Museum.

Two Artists With a Shared Passion: Paying Homage to Nature, Native Culture, and the Beauty of Imitating Life

Allen Eckman was born in South Gate, California in 1946. From ages five to fifteen, his family of three brothers and two sisters lived with their parents on a small farm in Lancaster County, Pennsylvania. They eventually returned to California to stay.

After graduating from Thousand Oaks High School in 1965, Allen enlisted in the Marine Corps. Four years later, he was a Sergeant E-5 and a decorated combat veteran of the Vietnam War. When Allen left the military, he began pursuing his lifelong passion: art and design. He completed his formal education at Art Center College of Design (Advertising Art) in 1974.

Then, Allen met and later married Patty (Tenneboe) Eckman. They met while attending college. Patty majored in illustration, and shares her husband’s passion for art and design. She was born in Brookings, South Dakota in 1950, and grew up in Rapid City. In 1965, her family moved to Southern California’s San Fernando Valley.

The couple owned and operated a small advertising company in the Los Angeles area, where they raised their three children. Twelve years later, Allen and Patty decided they’d had enough of their stressful advertising careers. So they set out on a whole new career path, opening up an exciting and different world for both of them: the fine art of cast paper sculpture. Allen discovered the medium as an art director while photographing a brochure. He instantly recognized the purity, warmth, and most of all, the possibilities that this medium had to offer. 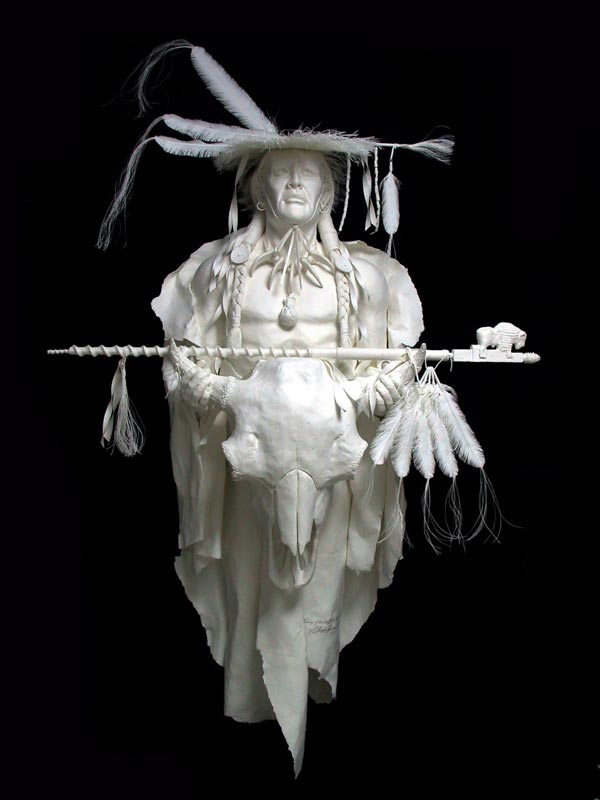 Here is one of the Eckmans’ highly detailed works, made from a process using molded paper that they have perfected. This piece is entitled, “Offering of the Buffalo Medicine.” Artwork like this can be ordered from their website, where they also offer instruction in person and on DVD, plus the unique materials needed for this unusual medium. 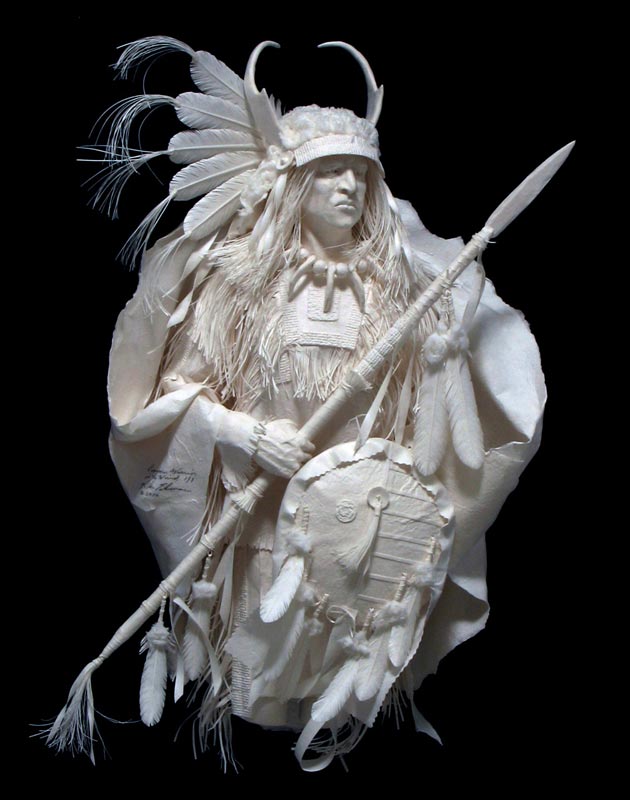 Cast paper sculpture has been around since the 1950s, originating in Mexico. It should in no way be confused with papier-mâché. The two mediums are completely different. In cast paper sculpture, the Eckmans first mix an acid-free paper pulp in the studio (“hydro-pulper” from two raw stocks, cotton and abaca). Then, the pulp is cast into silicone rubber molds taken from original sculptures created by Allen and Patty.

The paper is then pressed under vacuum pressure—or by hand—in the mold, where most of the water is extracted at the same time. The drying process is completed by evaporation while the paper is still in the mold. After the dry and hard casts are removed from the molds, the exclusive process of chasing, cast additions, cast alterations, sculpting in paper, and detailing begins.

This piece is entitled, “A Way of Life.”

It takes a great amount of time and experience to create each piece. Some works are so painstakingly detailed that they can take many months to complete. The cast paper process is similar to the cast bronze method in many ways. Of course, the finished cast paper product is white, lightweight, and can have an enormous amount of detail due to its properties, as well as the artists’ own inventiveness. The Eckmans are the inventors of this process. Eckman Method® of Cast Paper Sculpture is a proprietary trademark. Since 1988, Patty and Allen have developed and perfected the medium of cast paper far beyond any other artists in the world.

As a result, their work is considered by many critics to be the premier of the industry. Since the paper is acid-free, the sculptures are all museum quality. “We have really enjoyed the development of our fine art techniques over the years, and have created a process that is worth sharing, said Allen Eckman. “We believe there are many artists and sculptors who will enjoy this medium as much as we have.” 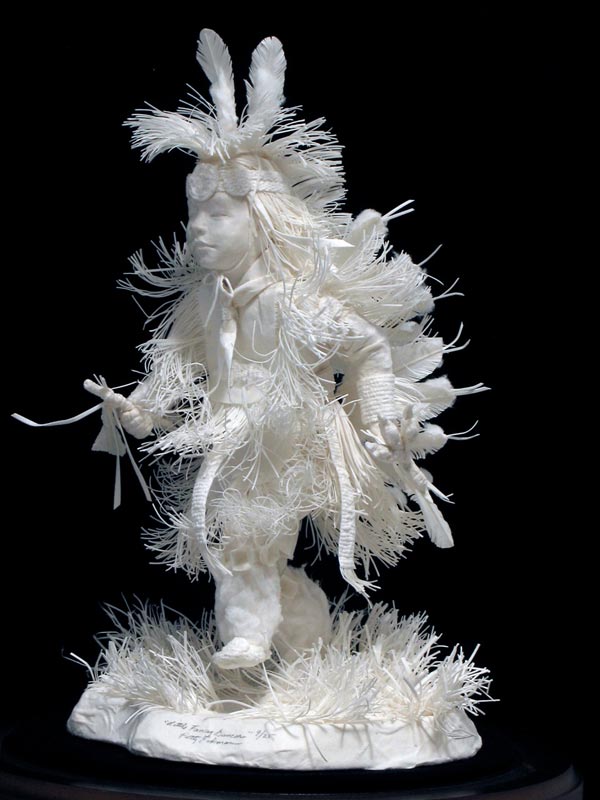 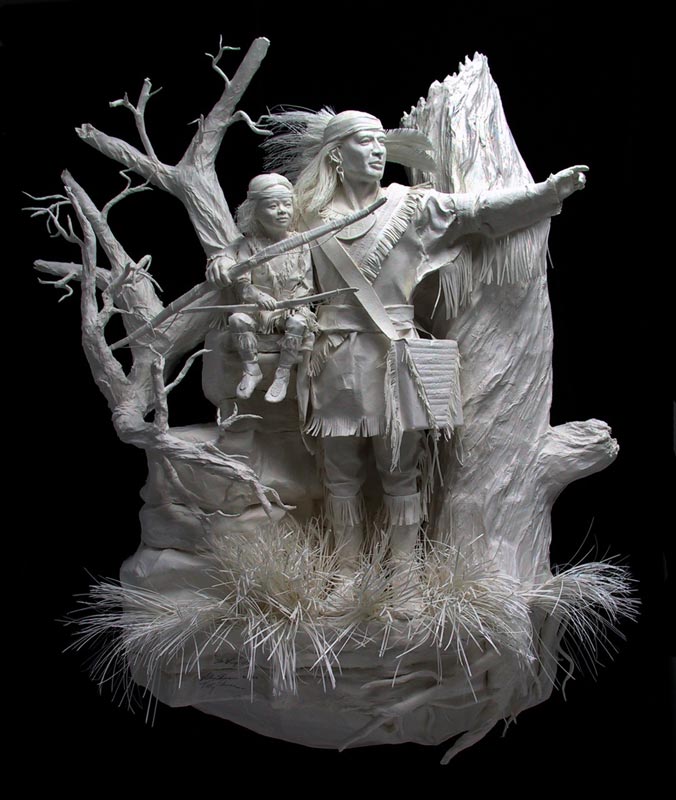 A piece entitled, “The Way.”

Allen’s inspiration for the Native American subjects he creates came from a significant event in his life. “When I was a small boy in Pennsylvania, I found an arrowhead in a newly plowed field. I took it home to my grandfather, who told me we have a Cherokee ancestry,” Allen proclaimed.

“My great, great, great grandmother’s name was Tounacha-Cherokee Case. She was born in the year 1793 in North Carolina, by the census record. It does not say she was Cherokee because the box on the 1850 census record specifying ethnicity was left blank. My guess is that being married to Laxton Case (a white man) at the time of the Indian removal (The Trail of Tears), and living in Cherokee country, was a precarious situation for both of them.”

“I really am interested in the Indian’s material, physical and spiritual culture, and that whole period of our nation’s history, which I find fascinating,” he continued.

“From the western expansion, through the Civil War, and beyond is of great interest to me.” Eckman has expanded his work through all these subjects and time periods.

In harmonious contrast, Patty has a great interest in wildlife, birds, and flowers in particular. “Ever since I was a child I have had a great appreciation of wildlife,” said Patty. “I can sit for hours and watch the birds come to my feeder. When I look at a flower I don’t see just color, I see form and grace. Wonderful shapes that the color tries to overpower.” Patty also has a deep interest in Native American culture, and since the year 2000 has been sculpting beautiful Indian women and children. On large, complicated, detailed works, the couple often works together, both signing the piece when completed. 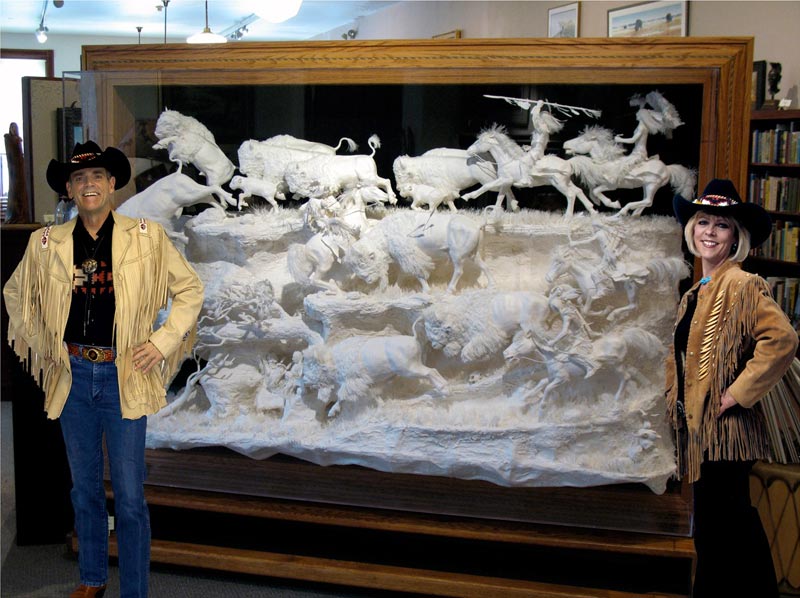 This joint effort between Allen and Patty is called “Prairie Edge Life.” It is the fourth piece in a series of 90” x 60” x 20” relief museum quality cast paper sculptures. This photo gives a good idea of the extensive work involved in some of the larger pieces.

The Eckmans have resided in Rapid City, South Dakota since 1992. Their home and studio are in the beautiful Black Hills. There, the couple finds inspiration everywhere. The wildlife, the history, the climate, and the spirituality of their lives provide Patty and Allen with an enormous amount of creative direction.

To learn more about the artwork, instruction in cast paper sculpting, or t0 purchase specialized materials, see the Eckmans’ website.