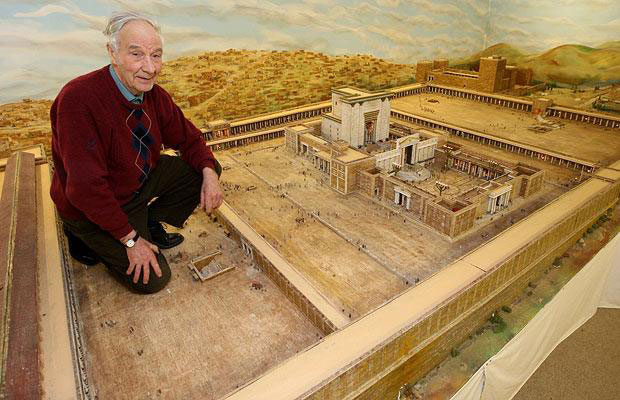 We regret to inform that Mr. Garrard passed away on May 10, 2010, and that his model of Herod’s Temple is no longer available for public viewing. At that time, the family was making arrangements to find it a new home. For a while, it was located in his daughter’s book shop, but according to her, Mr. Garrard’s final wishes were that his temple model would no longer be available for viewing after he passed away. The family is honoring those wishes.

There are few craftsmen with the initiative to take on a project that they know they will probably not finish in their own lifetime. Alec Garrard, however, was one of those rare few. Mr. Garrard took on the massive project of building a giant replica of the Temple of Herod, at a scale of 1:100, in a shed on his property. The following story is based on an article from The Telegraph, and the photos taken by Geoff Robinson for that article are reproduced here with his permission. The original article can be found here. 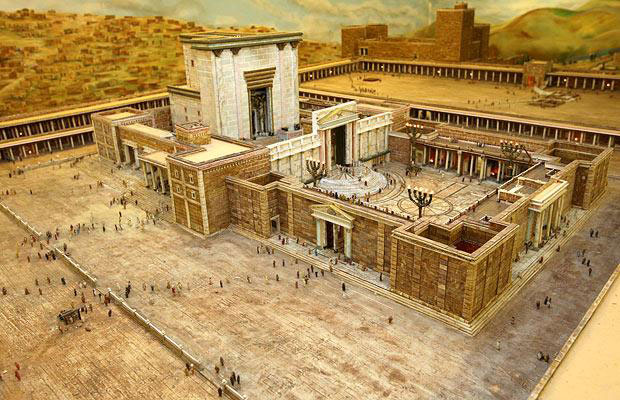 Another view of Mr. Garrard’s detailed temple. The painted backdrop adds depth and realism to the model. 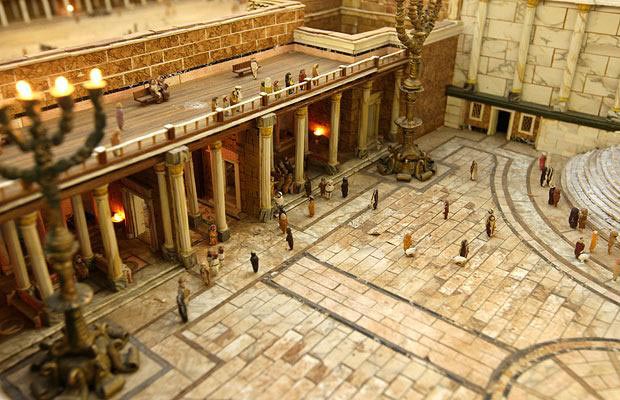 A close view of the prayer court inside the temple.

A Miniature Temple Built To Be Larger Than Life

Biblical history is a subject of interest to many, but few have devoted as much research, time, and effort to bringing the past alive as Alec Garrard of Norfolk, England. While in his 40’s, Mr. Garrard became interested in the Temple of Herod.

The temple was destroyed by the Romans in 70 AD, only six or seven years after the completion of the entire complex. (The temple itself was completed before Herod’s death in 4 BC.) Alec spent three years doing research on the temple before beginning construction of the model in a shed on his farm.

Mr. Garrard was quoted in the article by The Telegraph saying, “I’ve always loved making models, and as I was getting older I started to think about making one big project which would see me through to the end of my life. I have an interest in buildings and religion, so I thought maybe I could combine the two, and I came up with the idea of doing the Temple. I’d seen one or two examples of it in Biblical exhibitions, but I thought they were rubbish and I knew I could do better. I have been working on it for decades, but it will never be finished, as I’m always finding something new to add.” 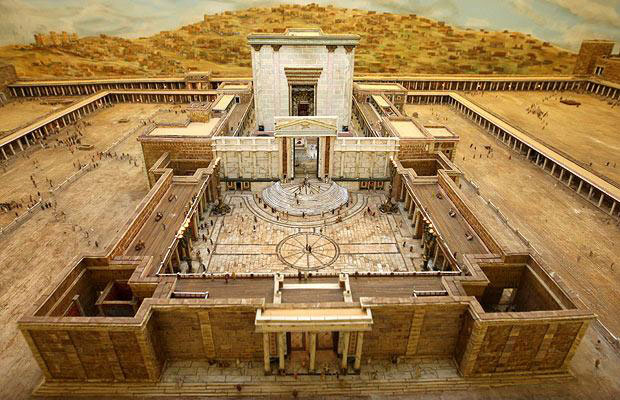 A wide angle shot gives a better view down into the temple. 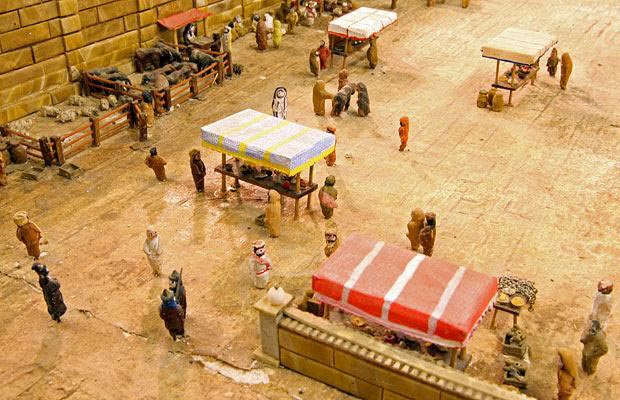 A closer look at the temple marketplace.

Indeed, at age 78, Alec had already devoted over 33,000 hours to the construction of the 20’ x 12’ model. Even when the model was already populated with over 4000 handmade clay figures, there was still work to be done. Alec admitted that it would take many thousands more before it would accurately represent the number of people who occupied the temple and surrounding area. Each clay figure is about 1/2” tall, dressed in correct period costume, and took about 3-1/2 hours to make.

All told, there were 32 different versions of Jesus that could be found in various parts of the model. Additionally, each tile and column in the model was individually made from clay. They were baked in Mr. Garrard’s oven before painting and assembly. The tiles were applied over a plywood understructure for the buildings, and then the bricks and tiles were attached with glue. 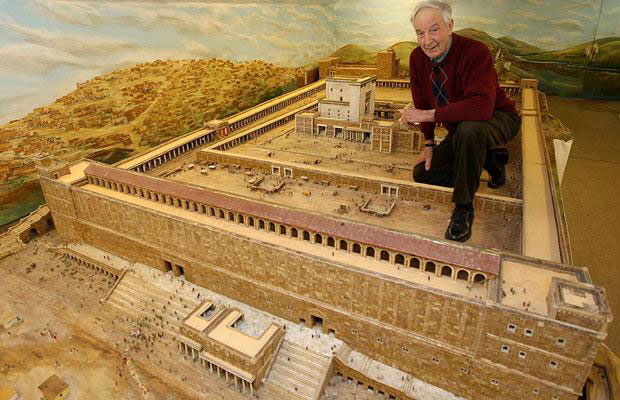 Alec Garrard posing on the model that he spent over three decades building. 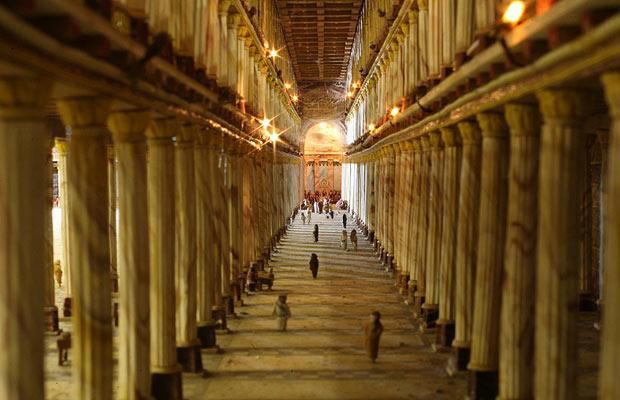 A view inside the royal porch. Note the level of detail.

The model was housed in a wooden shed on Alec’s property, and people from all over the world traveled to see it. He provided visitors with a pair of binoculars so they could closely examine the details. At the time, historical experts believed it was the best representation in existence of what the ancient Jewish temple actually looked like when completed. Mr. Garrard had worked directly with many of the archeologists who studied the actual ruins.

Though he had received several offers to buy the model, Alec said it wasn’t for sale. All that actually remains of the real temple in modern Jerusalem is the Western Wall, or “Wailing Wall,” making this model one of the best guides to the magnificence of the original construction.

For those interested in learning more, Mr. Garrard also produced a book on the model entitled, Splendor of the Temple—A Pictorial Guide to Herod’s Temple and its Ceremonies. The 96-page illustrated book was published by Kregel Publications in 2001, and is still available through many booksellers. There are two other models of this temple in Jerusalem at the Israel Museum and the Holy Land Hotel, respectively.

Additionally, Mr. Garrard’s scale model temple is featured at the 25 minute mark (25:13 to be exact) of a YouTube video that centers on the German writer, W.G. Sebald. Mr. Sebald had met with Mr. Garrard at some point, and photos of the temple are shown from 25:13-26:52 in the video. 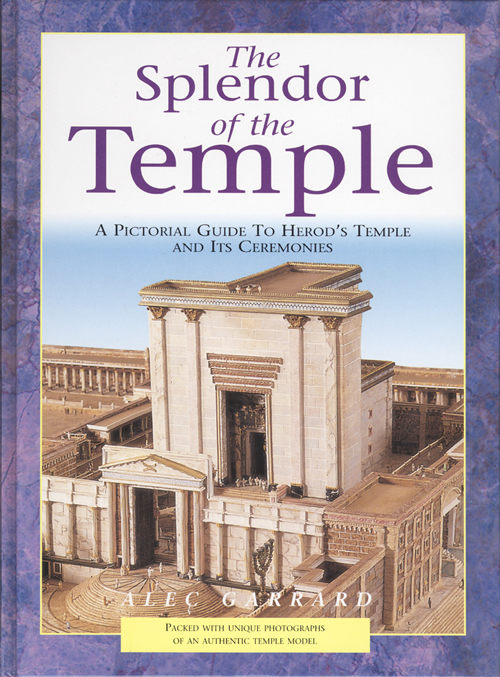 Mr. Garrard’s published book on the Temple of Herod. 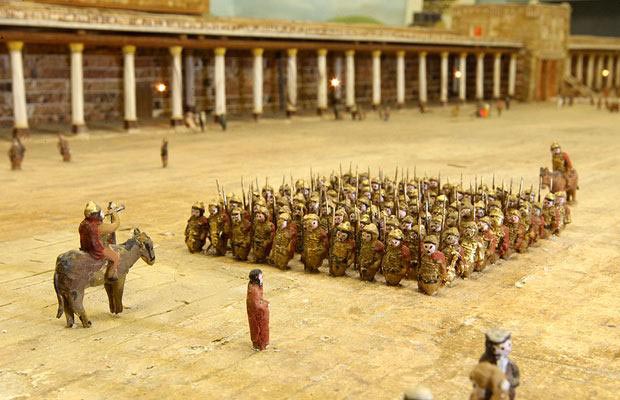 A group of soldiers forms in the temple courtyard.

We applaud Alec Garrard’s single-minded devotion to this project, and the uncompromising craftsmanship in its construction. We hope it will inspire others to follow their dream. Even though Alec was quoted saying that his wife, Kathleen, thought he was “mad” for taking on such a project, it never bothered him. Mr. Garrard took this commentary in stride, with good humor, and never let it hinder his efforts to construct a model of truly biblical proportions!

View more photos of Mr. Garrard’s incredible model of the Temple of Herod.