Jewelry With a Precision Machined Touch 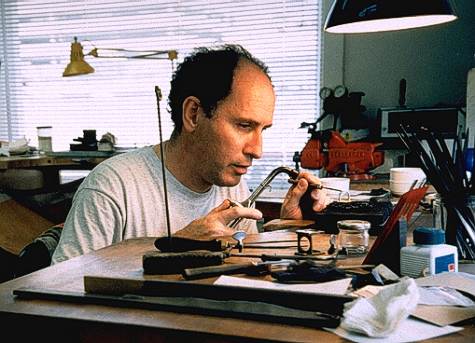 Abrasha at his workbench. Many skills went into making these highly precise pieces of jewelry including: 3D CAD design, machining, casting, soldering, hand filing, and polishing.

San Francisco-based jewelry artist Abrasha (who stopped using his last name long ago) says he became a goldsmith the moment he first walked into a jeweler’s workshop. It was a chance meeting in Amsterdam in the early 1970’s. Abrasha was studying to be a dentist when a friend brought him to an acquaintance’s goldsmithing workshop. After one look at the goldsmith’s shop, Abrasha immediately knew what he would do for the rest of his life.

Abrasha was born and raised in the Netherlands. From a very early age he knew that he had good manual dexterity, and very good hand-eye coordination. He recalls that once, when he was about 6 years old, his class was tested at school by what must have been a psychologist.  The man had a strange box which had to be closed with a separate lid. However, you could not simply put the lid on the box. In order for it to close, someone would have to slide, push, and move all kinds of levers and buttons in a particular order. Abrasha remembers enjoying the challenge, and being able to complete it successfully. He later found that he was one of the few students in the class who had accomplished the feat. 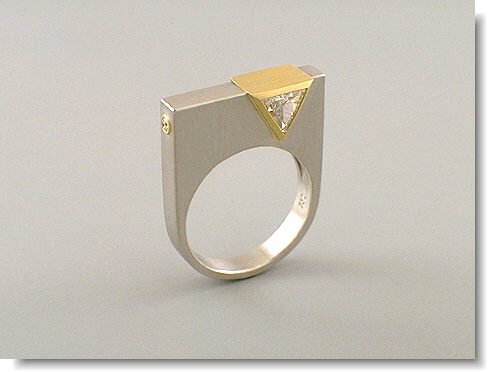 This Double Trillion ring is made from platinum, 18K gold, and 64 total carat weight of diamonds. The ring has two “trillion cut” diamonds, set back to back in the bezel, so that one trillion is visible on each side of the ring. 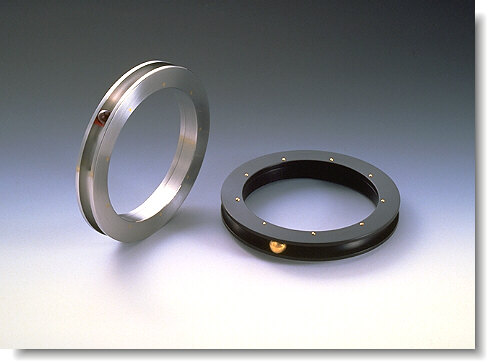 These “Race” bracelets enclose balls of ruby or gold that can move around the edge like a ball bearing in a bearing race.

When he got a bit older, Abrasha very much enjoyed building plastic car, airplane, and ship models. Most of the model planes and ships that he built were American warplanes and vessels. Abrasha did not speak, read or understand English, but he was always able to build the models based on the instructional drawings included in the kits.

Abrasha also enjoyed taking things apart. He remembers taking his piano, clarinet, and saxophone apart more often than he practiced playing them. He never disassembled the piano completely, but would simply remove the keys and return them. However, when it came to the clarinet and saxophone, he enjoyed taking all the parts off, mixing them up, and then puzzling everything back together. Later in his life, Abrasha’s wife and oldest son found an old IBM electric typewriter sitting on a sidewalk near the garbage. His wife brought the typewriter  home, and Abrasha took it apart with his son’s help. It took them some time as there must have been a few thousand parts in the machine. They counted over one hundred small springs alone. Abrasha was amazed to think that just a few years before, state of the art printers were machines with thousands of movable parts. Now they had computer printers with only a few dozen movable parts. Needless to say, Abrasha was always intrigued by the different mechanisms of everyday objects. 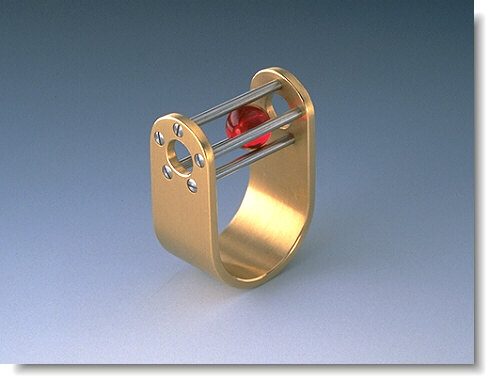 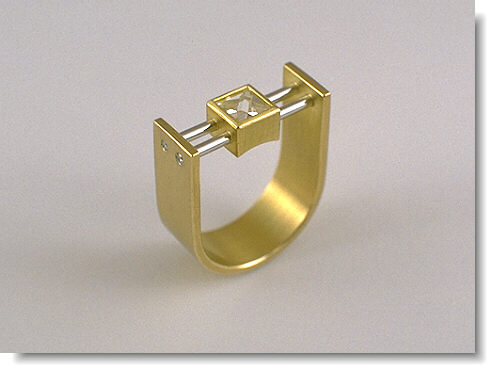 This ring is made of 18K gold, platinum, and a “context cut” diamond.

After high school, Abrasha wasn’t really considered “fit” for further academic studies. His counselors suggested that he should become a watchmaker, but that didn’t appeal to him at all. In fact, the thought was horrifying. Abrasha was advised that if he did want to pursue an academic career, then dentistry would be a natural choice given his manual dexterity. He decided to follow this course, but he wasn’t a particularly strong student. Abrasha excelled with his manual subjects and lab work, but he simply didn’t spend enough time with the books to get great grades.

One day, Abrasha’s best friend Benjamin introduced him to a woman named Victoria, who ran a goldsmithing shop. Benjamin brought him to the shop, and at first glance Abrasha knew that his goal was to become a jeweler. When he came home a few days later and told his parents what he wanted to do, his mother replied, “A goldsmith? But you don’t even draw!” She was right in saying that it didn’t make much sense at the time, but Abrasha was sure that this was the course he wanted to take.

Following his visit to that workshop, Abrasha started researching schools. Initially, he was able to find some good programs in his home region of Holland. However, with some additional research he also found the “Goldschmiedeschule” (School for Goldsmithing) in Pforzheim, Germany. This seemed to be a better choice for the training he wanted. Pforzheim was to the jewelry industry what Detroit was to the automotive industry. With the support of his family, Abrasha moved to Germany in September of 1973 to begin his formal training. 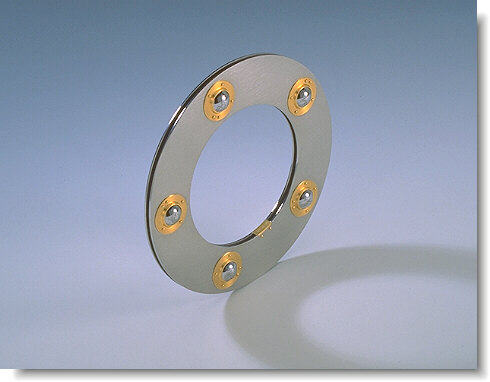 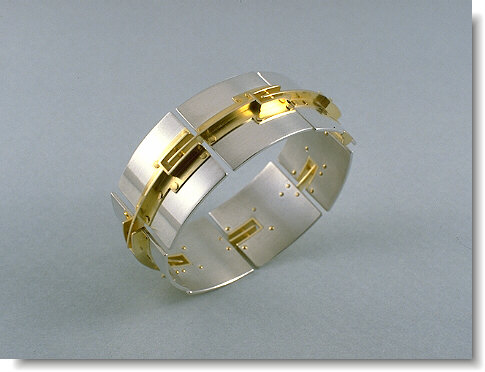 This bracelet with rivets was made of Sterling Silver and 18K Gold.

Following his certification, Abrasha worked as a bench jeweler for Klaus Ullrich—one of Germany’s most important and influential post-war jewelry artists and innovators. In 1977, the Chief Essayer of Amsterdam granted Abrasha a Master Sign after proving his ability in the field of jewelry making. He still uses this Master Sign (hallmark) to inscribe his work today. Shortly after this, Abrasha took up an opportunity to come to the United States. He worked for two years as an instructor at the California College of Arts and Crafts in Oakland, and the Revere Academy of Jewelry Arts in San Francisco. Eventually, he set up a studio of his own in 1979. Abrasha started his business doing “trade” work for jewelers, such as ring sizing, general repairs, chain repairs, and stone setting. It took several years for him to become successful with his own designs. He has since gone on to produce many award-winning pieces. Here is a list of some of the honors he has received: 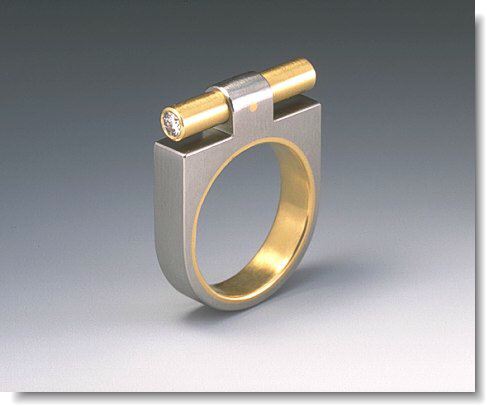 This piece is simply called “Machined Ring #2.” The ring is made of stainless steel, 18K gold and 22 carats in diamonds. 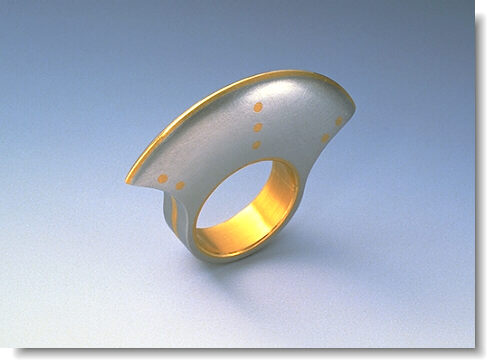 This Washer ring is made of stainless steel, sterling silver and 24K gold.

At one point in his career, a colleague (who was an old-time watch maker and jeweler) suggested that Abrasha should get a lathe. The colleague noted that Abrasha’s work was already very precise, and that he would probably enjoy incorporating a lathe into the process. Abrasha was glad he listened, because the precision offered by machine tools allowed him to take his work to a higher level. He imported his first lathe from the Czech Republic. Later on, he also found a used milling machine on the Internet. Thanks to the help of a couple of friends on the East Coast (the mill was in upstate New York) he was able to buy the machine sight unseen. 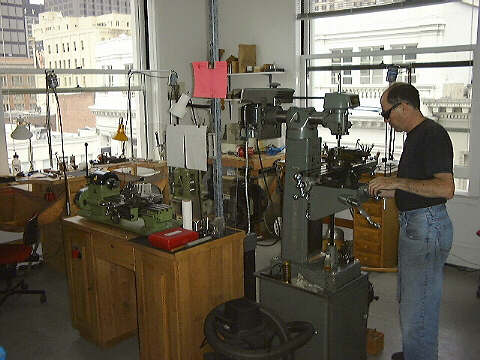 Abrasha’s jewelry shop looks, in many respects, like a machine shop. Here he works on his milling machine. To the left is a small benchtop lathe. The many windows offer plenty of light, plus a fine view of downtown San Francisco.

When asked, “What inspires you?” Abrasha answered as follows:

“I am inspired by objects around me and by images of objects in newspapers, magazines and books. Technology inspires me in general and machines and buildings in particular.  Since I am a goldsmith, I am very detail oriented, and I will dissect machines and buildings and focus on certain parts of these objects. Other things that have inspired me are discarded items like rejected platters from hard disks, used carbon dioxide cartridges of soda water siphons, rusted steel, washers and scrap plywood to name a few. Objects like the hard disk platters and the CO2 cartridges were especially fun, because they are directed from the start into their final shape by virtue of their function.”

For more on Abrasha’s work, see his website. You will want to visit the “Process” page of his site, where he goes into step-by-step detail on how two of his rings are produced. It offers an excellent photo record that allows for deeper appreciation of the numerous setups and operations involved in making a seemingly simple ring.