From Hot Rods and Motorcycle Engines to Innovative Model Engines. 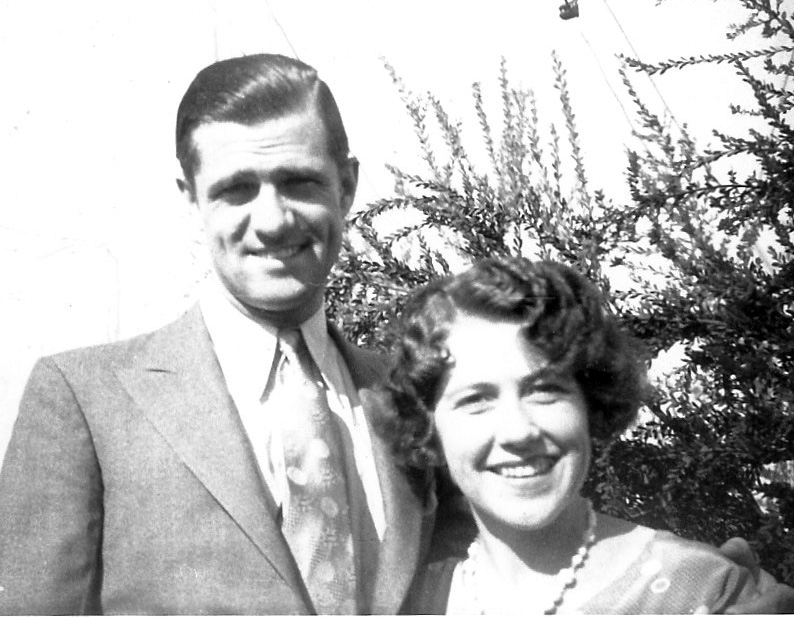 The following information on Mel Anderson was written and provided by Tim Dannels, Publisher of The Engine Collector’s Journal.

Mel Anderson made his first model airplane in 1922, powered by rubber. After making many rubber powered models, he thought there must be a better way, and in 1929 he made a two cylinder engine powered by compressed air. It was made from brass fishing rod ferrules, and is believed to have been the first engine with a front rotary valve.

Eventually, Mel grew tired of modeling and his interest shifted to hopping up Model T Fords and motorcycles. After a few years of playing with two-cycle motorcycle engines, he thought, “Why not an engine for a model airplane?” In 1932, Mel made his first model engine. It was massive with a 1.125″ bore and 1″ stroke, and an all-up weight of 28 ounces (see photo below). In spite of its size and age, the workmanship of the Anderson .90 was superb, and was a hint of the many fine designs he would later perfect.

The cylinder is a well machined iron casting, topped off by a German Bosch spark plug bigger than some of the 1/2A engines he would later build! The piston is cast aluminum with 3 rings. The aluminum crankcase provides for radial mounting only. Automotive points are used on the adjustable timer and the prop hub assembly is a miniature of full-size aircraft design. Carburetion is through a dual throat casting with a throttle and high and low speed venturis. The word “ANDERSON” is cast around the back of the crankcase. 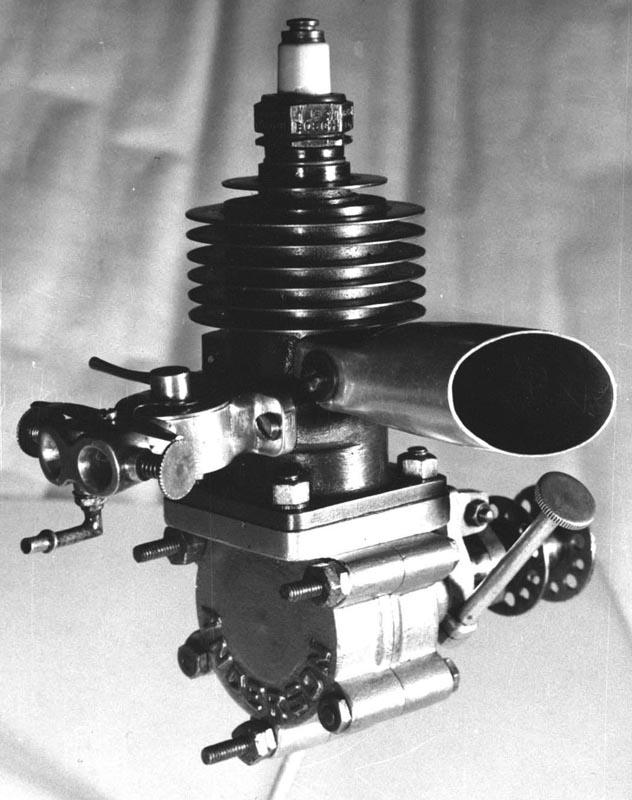 This was Mel’s first engine, which was quite large by model standards. The engine belonged to Ted Enticknap.

Mel decided that, while it ran well, the engine was too big for practical use and set out to make an engine more suitable for model use. The front rotary intake on the air motor worked well so he incorporated it on his next gas engine. It had a bore and stroke of 7/8″ and a displacement of .525 cu. in. Mel, as he did on the large engine, made his own patterns, core boxes and castings. It was all aluminum with a cast iron sleeve. The piston and sleeve were lapped with the fit tighter at top dead center—a trick Mel learned from his Indian motorcycles. It had an updraft carb and is believed to be the first gas engine to use a front rotary valve and a true needle valve. The name “ANDERSON” is cast on the bottom front of the case. The plug was made by AC as a watch chain ornament in an advertising campaign (see pictures of the engine below). 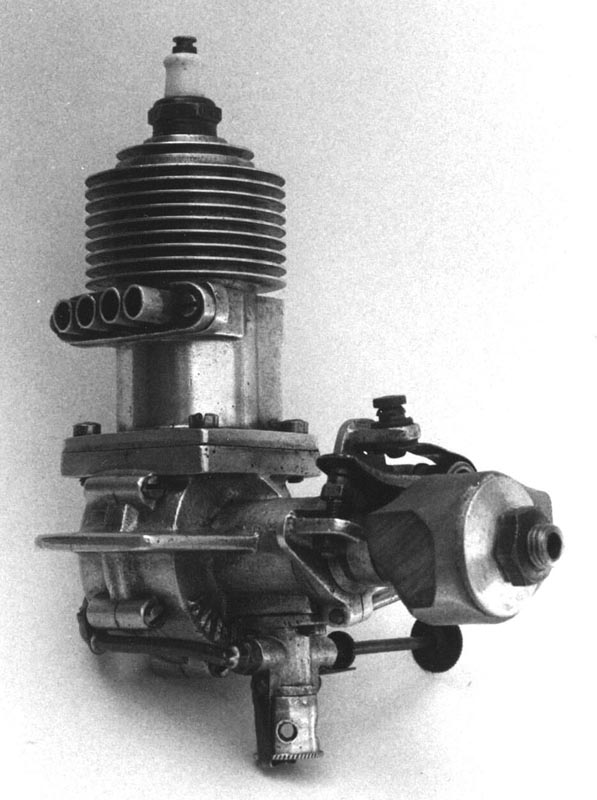 Mel’s .525 engine is shown here. It was the first known engine with a front rotary valve and true needle valve. 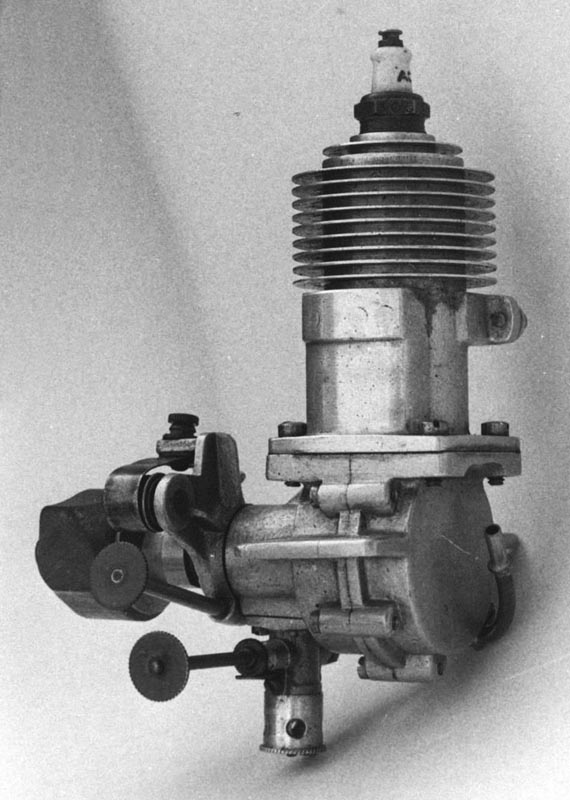 Alternate view of the .525″ engine. This historic engine belonged to Bill Simpson, and the photos here are from John Morrill.

In 1936, Mel teamed up with Bill Atwood to design the Baby Cyclone engines. After a short stay, Bill Atwood left Aircraft Industries and Major C.C. Mosley to begin his own long line of engine designs. Mel Anderson stayed on and took the Baby Cyclones through several stages of development. In 1939, Mel designed the famous Super Cyclone and developed it further through several models. After WWII, Mel started his own manufacturing company. The Anderson Spitfire was the first engine he manufactured. Styled after the earlier Super Cyclone, the Spitfire was more robust and delivered quite a bit more power. These started as .60 cu. in. displacement engines, but switched to .65 shortly thereafter. Mel was very quick to jump on the small 1/2A wagon with his beautiful Baby Spitfire. This was followed by a series of small engines.

As a result of a business partner’s wrongdoings, Mel Anderson Manufacturing was closed and all tooling and remaining engines were sold off. Mel then went to work for Gil Henry at VECO where he designed the Series 100 VECO 19, 29 and 35 engines. 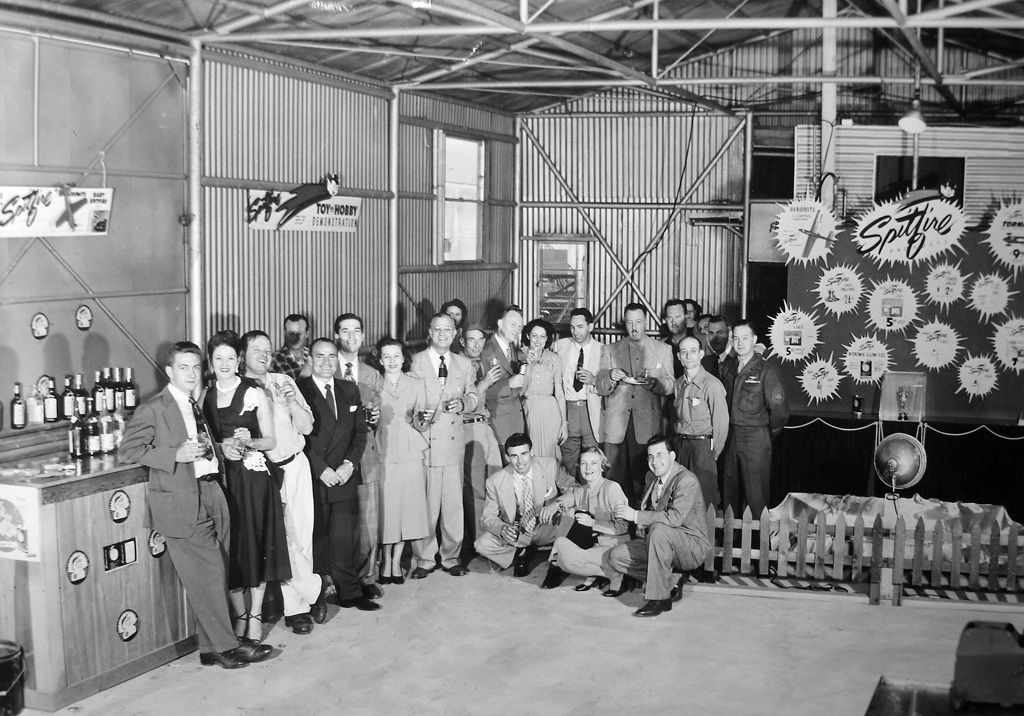 Mel and some employees celebrating an occasion. Note the Spitfire display at right.

More About Mel Anderson and His Engines…

This information was pulled from a web discussion group archive. Authors are unknown.

“…the original Mel Anderson 1/2A engine, the .045 Baby Spitfire, had a curious origin. In the early 1930’s Mel worked with Bill Atwood (America’s most prolific model engine designer, responsible for the original @asp .049 and the Cox Tee Dees) on the first model engines to be manufactured on the West Coast. These were the Baby Cyclones: .36 displacement but about the same external size and weight as the Brown Junior .60’s. The Baby Cykes were also the first front rotary valve model engines.” 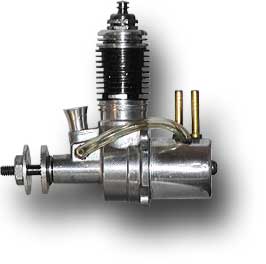 This is Mel’s “Baby Spitfire,” which was his first small engine design (0.74 cm³). The bypass ports are cut into the cylinder just below the exhaust ports, and the transfer channels are formed by a hollow between the steel cylinder and the aluminum spacer ring. The fuel tank is attached to the back with a single screw. Production started in 1949, and special versions were produced for other companies like American Junior, Wen-Mac and Royal. The complete cylinder assembly, from piston to head, was also used in Roy Cox’ first powered race car, the Cox Special. (Information and photo contributed by Martin Hepperle.)

“In 1948, three separate approaches to tiny model glow engines were made: by Lud Kading and Johnny Bordbeeck at K&B (resulting in the .020 Infant), by Charlie Brebeck at Herkimer (the OK Cub .049), and by Mel Anderson. To simplify setting the design parameters for his new tiny engine (the term ‘1/2A’ was months in the future), Mel took the easy way out and made the Baby Spitfire’s bore and stroke precisely half those of the Baby Cyclone.” —[JW] 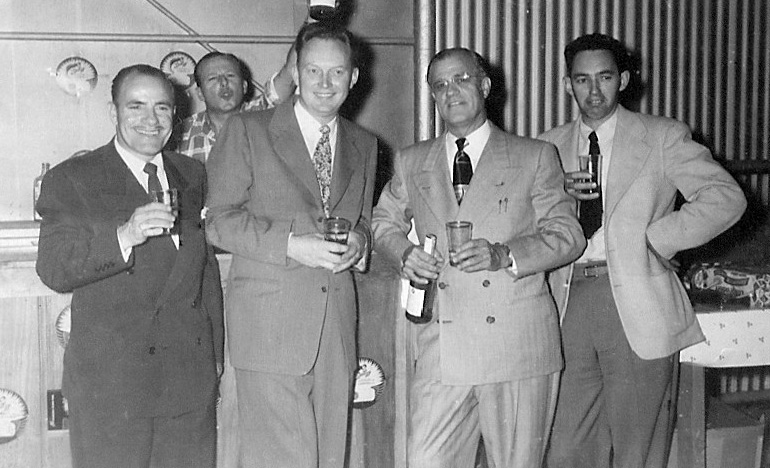 Mel Anderson with some associates in their Los Angeles factory.

Bob Meza submitted the photos of Mel, Ruth, and the group shots. His mother worked for Mel in 1952. Bob noted that the factory was located at 2982 W Pico Blvd in Los Angeles.

More information about Mel can be found in this short biography from the Academy of Model Aeronautics (AMA).