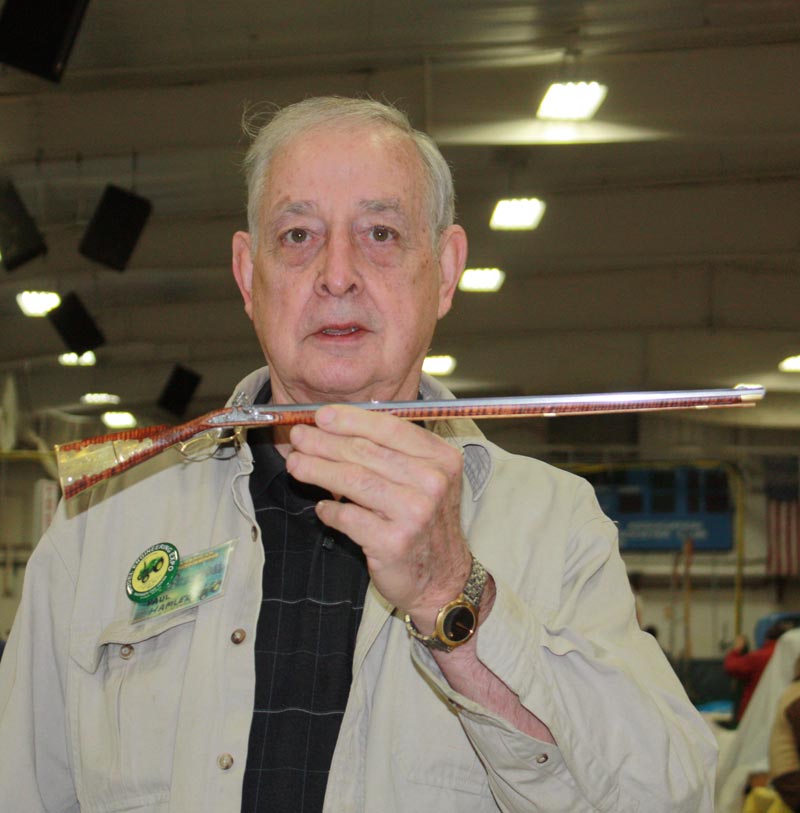 Paul Hamler holding up one of his 1/3 scale Kentucky long rifles at the NAMES Expo in Southgate, MI in 2011.

The following article has been reprinted here with permission from The Tool Shed, which is the newsletter of CRAFTS (Collectors of Rare and Familiar Tools Society).

The Best of the Past, Brought Back To Life in Limited Editions of Finely Crafted Miniature Tools

I was first introduced to Paul Hamler and his miniature tools in 1990, at the MW-TCA Spring meeting held in Reading, Pa. I had seen handmade miniature tools before, but never like these. Paul’s were amazing in both their quality and detail. He had truly elevated this craft to new heights. These miniature works of art are actual working tools, constructed with an exactness that is unexpected in something so small, and truly have to be seen to be believed.

Paul comes from a family of craftsmen. His father was a carpenter, and according to Paul, could work in any craft and fix anything. As a teen, Paul began a lifelong interest in the game of billiards. He developed his craftsmanship by building billiard tables and selling them in order to, what else, acquire more tools. When asked how he got started with miniatures, he relates a story familiar to most of us, “after I collected most of the common stuff, I started collecting the exotics….” And when faced with the financial realities of owning some of these rare tools, he decided that making copies of them might be a way to “own” those he couldn’t afford. 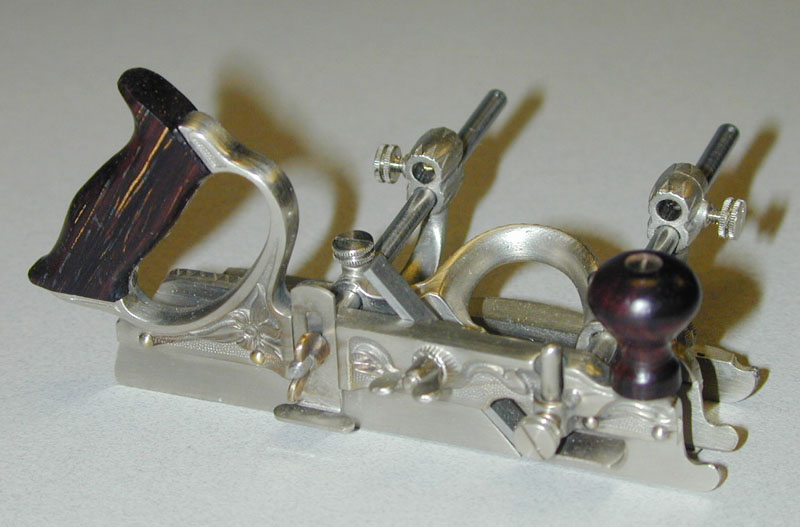 A miniature Stanley #45 type 4 multi-plane. Paul modeled it after the full-size original, which was used to shape wooden moldings. It was apparently named the #45 because it had 45 different shapes of usable cutters.

Now, Paul’s very first miniature was a plated brace he had seen in an old tool catalog, which just happened to be illustrated in one-third scale. It was completed in 1980, and he brought it to a tool show in Memphis, TN, where he showed it to Don Wood—another miniature toolmaker. With Don’s assistance, Paul picked up the essentials that a budding toolmaker needed to develop his skills, and it was at that time that Paul realized there might be a market for his miniatures.

When Paul began making miniatures, one of the first things he had to learn was investment casting—better known as the “lost-wax” process—to create some of the metal parts. While deciding on a list of items he would need, a chance call to a company that made casting tools and supplies connected him with the company’s president. The ensuing conversation resulted in a visit to Paul’s shop, where he got a first hand education in the art of casting, and further inspiration. 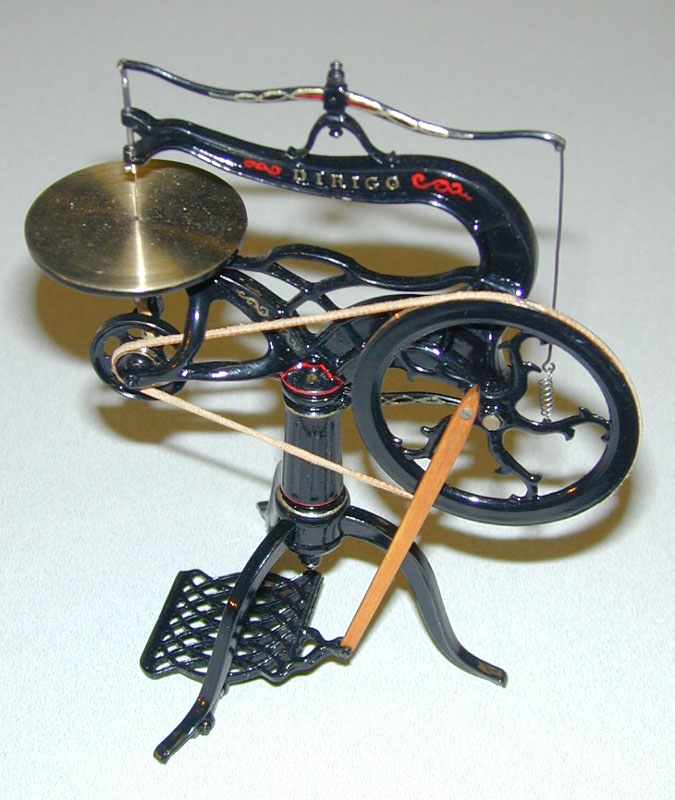 One of Paul’s more recent pieces is this beautifully painted 7.5:1 scale Dirago treadle scroll saw. The original was manufactured in Maine in 1854. Paul’s small model captures every detail of the fine castings, despite the fact that it stands only about 5” tall. 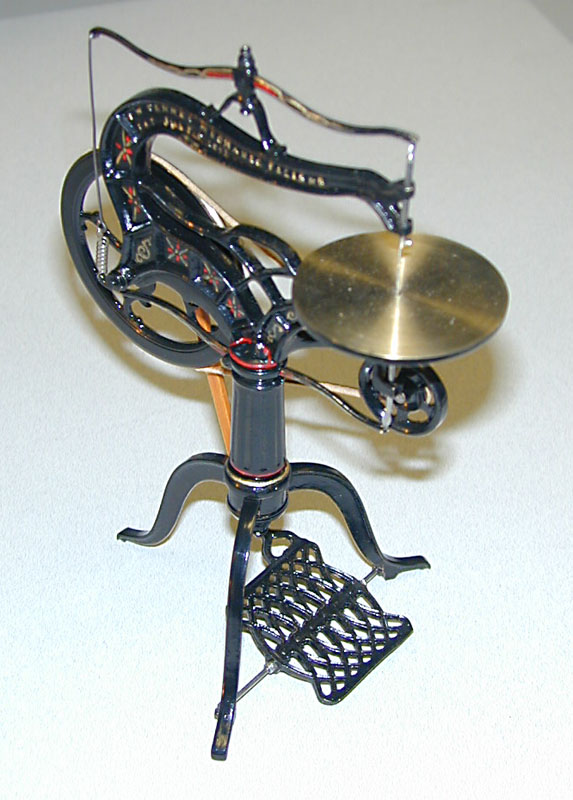 Lost-wax casting starts with the creation of a rubber mold of the item to be copied. The mold is filled with a special wax that takes on all the detail of the original model. An additional piece of wax, called a “sprue,” is added to the wax mold to create a channel through which the molten metal can be poured. This assembly is placed in a flask, into which the plaster-like investment compound is poured and left to cure. The wax mold and sprue are removed under high heat, which melts the wax, but leaves the detail and creates the final casting mold. Although very labor intensive, this method of casting provides an extremely high level of detail.

As for materials, Paul uses brass, bronze, silver and gold for casting; steel for blades and screws; and ebony, rosewood, boxwood, beech and ivory—all used just as they were in the original tools.

In addition to his miniature tools, Paul has crafted three full-size plane tools. The first was a copy of Stanley’s No. 212 scraper plane, which can be identified by the HT (Hamler Tools) logo in place of the Stanley logo. Next, was the exquisite John Mosely ivory plow plane, which was thought to have been created for the 1855 Paris Exposition. The original was “discovered” in the workshop of the Record-Ridgeway Tool Company in London, and was put on display in the company’s main office, only to disappear again a short time later. This plane was made from elephant ivory, and was elaborately engraved along the body, wedge and fence. Also, sadly, somewhere along the way the arms had been shortened on the original, probably so it would fit into a toolbox. Paul made five full-size copies and two 1/3 scale miniatures, all using pre-ban ivory with sterling silver fittings. 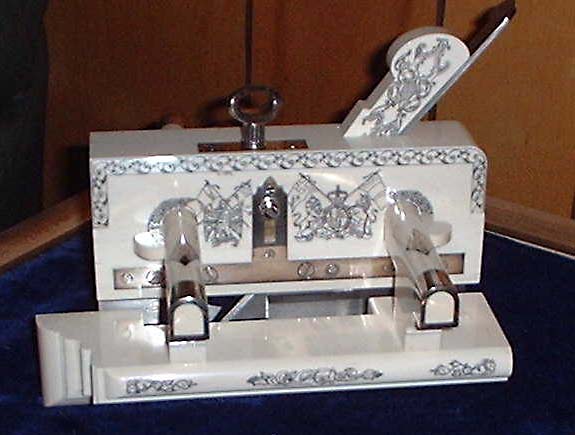 This miniature plane exhibits a lot of engraving detail. Evidently, this type of tool comes from an era when craftsmen were very proud of their tools. This is one of only five 1/3 scale models that Paul made before the ivory ban. 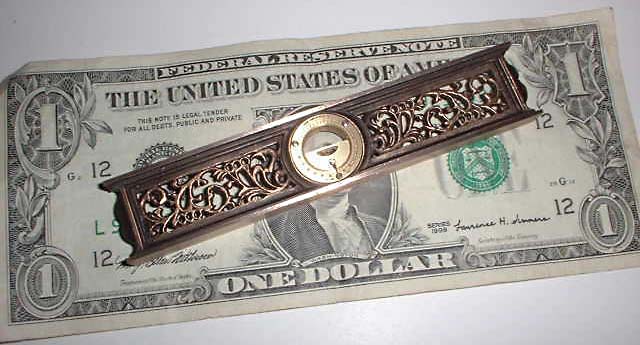 A miniature Davis level sits atop a dollar bill, giving a good sense of the size and detail of Paul’s work.

The third plane, a working copy of Charles G. Miller’s No. 50 plow plane, patented in 1872, is certainly one of the most beautifully detailed planes ever manufactured. Paul’s limited edition of 500, in bronze, are actually nicer looking than the originals, since the details in his castings are deeper and have better definition. The Miller’s Patent plane took Hamler more than 18 months to develop, working mostly from photographs.

A short-list of the miniature tools he has made are: marking gauges, in both ivory and ebony; a rosewood plow plane with ivory tips and nuts; the Marcus Tidey beveling plane; a Stratton Bros. brass-bound level in rosewood; and a number of Stanley planes, including transitionals. The Sargent “Lady Bug” plane, a Sandusky center-wheel plow plane, the Miller’s patent plane, and a Marples “Ultimatum” brace in ebony are all part of Paul’s output. His most recent work includes two Davis Level and Tool Co. inclinometer levels, the 12 inch “Filigree,” and the familiar “Mantle Clock”—both with working inclinometers.

With each new creation Paul seems to challenge himself further, raising the bar to increase the quality of his work. As Paul says, “the fun part is figuring out how to do it.” At the recent Brown Tool Sale and Auction in Harrisburg, PA, Paul displayed prototypes of three of his recent projects: a Kinney’s patent marking gauge, consisting of 35 individual parts; a Disston and Morss Fisher Patent bevel, with 32 parts; and a very elaborate foot-powered scroll saw, based on the Seneca Falls “Fleetwood” model.

As a personal project, Paul is constructing a miniature working model of a Bridgeport milling machine, which will stand only nine inches tall when completed. Also, he’s just completed a miniature of the elaborately engraved Colt Firearms powder flask for a friend who makes miniature Kentucky long rifles. 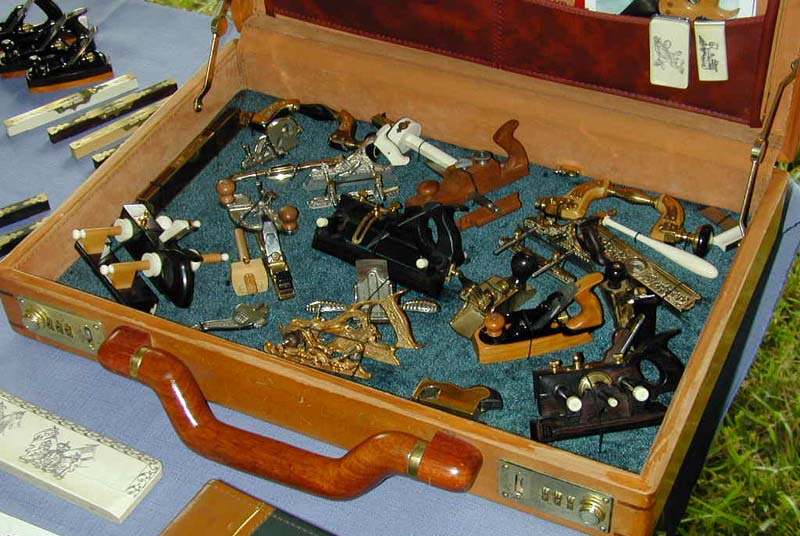 When Paul takes his models to shows, he carries them in this custom wooden attaché case.

The days of tedious filing and fitting, once required to finish the many pieces which make up his miniatures, are coming to a close. This is mainly because Paul has introduced Computer Numeric Controlled (CNC) machines to take up the slack. He has three lathes and three milling machines run by two computers, along with a Computer Aided Design (CAD) program to provide the fixturing and machining chores. A total of 22 separate machines are housed in Paul’s shop, which is less than 600 square feet.

Paul Hamler has developed a significant following for his limited edition miniatures, and most pieces sell out very quickly. He’s the only tool collector I know of who can boast of carrying his entire collection in a briefcase. He also hosts a blog on miniature tools. 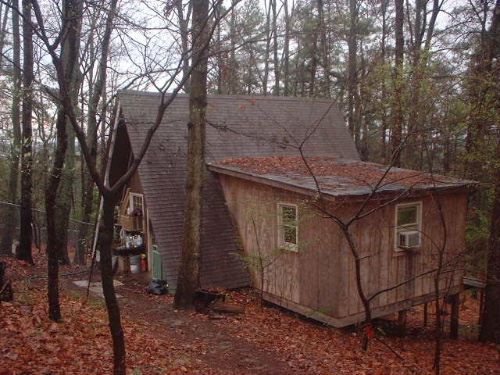 Paul’s old 600 square-foot workshop in the Georgia woods was packed with tools and materials. 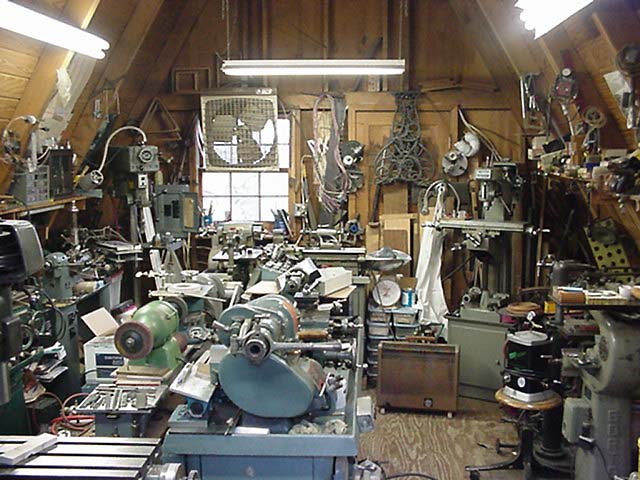 While this shop was sufficient enough, Paul has since moved into a larger workshop.

Around 2009, Paul noted that his passion for making miniatures had cooled. He was looking for a new miniature venture, and turned his focus to Kentucky long rifles. He purchased an early Lancaster kit by Jim Chambers, and spent the next 18 months making parts and tooling. Paul wanted to be able to produce miniature versions of the rifle as accurately as he had made his miniature woodworking tools. Like the tools, the rifles are made in 1/3 scale.

Now, Paul chose the Lancaster rifles made between 1770-1780 because of their fully developed style. They represented the finest architecture with a high, straight comb, slender wrist and forestock, and a wide, flat butt plate. Lancaster rifles were used all along the American frontier in Pennsylvania, both before and during the revolutionary war. Following the Revolution, these rifles were carried west into Ohio and Kentucky, and south into Virginia, Tennessee, and the Carolinas. The Lancaster is authentic, with either brass or sliding wood patchbox in the stock, and Paul reproduced both versions.

As noted by miniature gunsmith Michel Lefaivre, 1/3 scale is a good choice for a miniature gun. Any larger, such as 1/2 scale, and a bigger weapon like the Kentucky long rifle will appear to be too large for consideration as a true miniature. By contrast, going smaller than 1/3 scale will make the details and function of the gun extraordinarily difficult to reproduce—if not impossible to see altogether. Scaled engraving becomes hard to appreciate without the benefit of magnification.

More images of Paul’s miniature rifles can be found on his personal photo site, along with the pictures below. 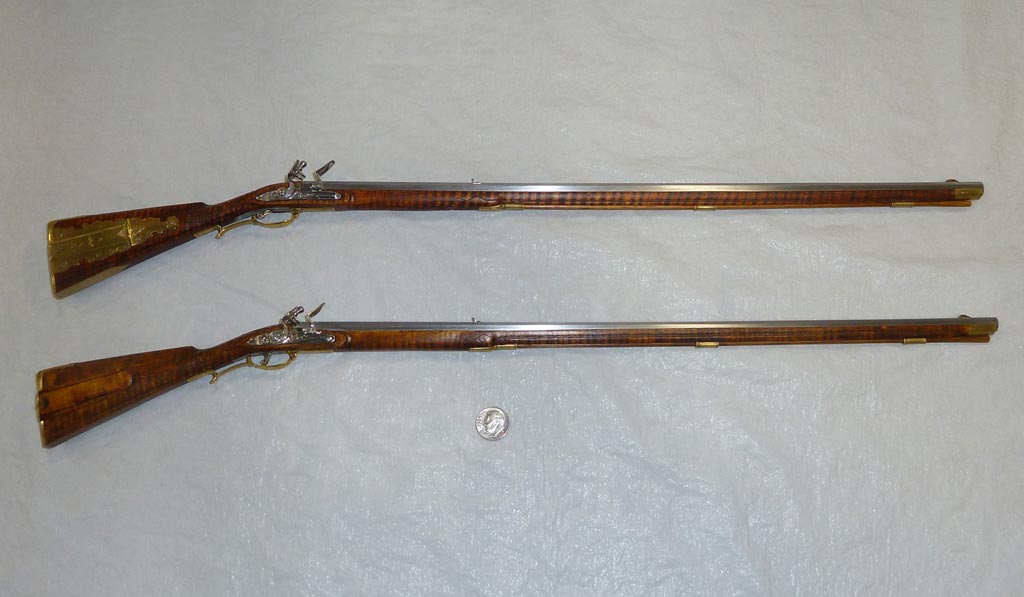 Two of Paul’s miniature Kentucky Long Rifles. This picture was taken at the 2011 NAMES Expo in Michigan, where Paul had them on display. 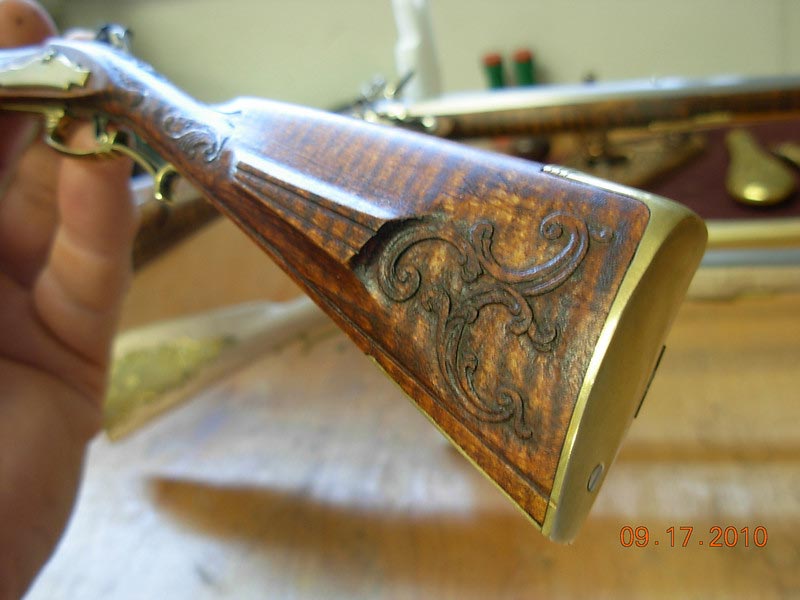 Notice the decorative carving on the miniature long rifle stock. 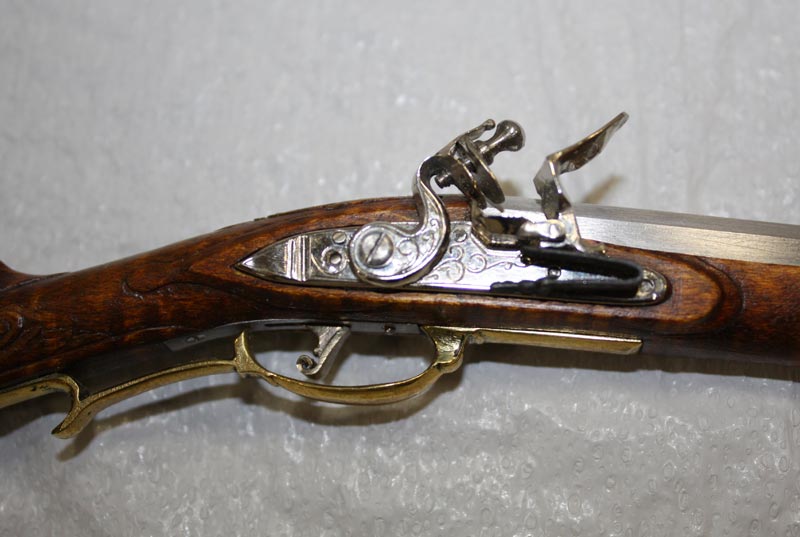 A close look at the long rifle’s flintlock firing mechanism.

Continuing on with his interest in miniaturizing significant guns, Paul’s next project was to model one of the world’s most well-known pistols. Colt pistols have long represented the gold standard in magazine-fed, semi-automatic handguns. All modern semi-auto pistols trace their roots to the Colt M1911 pistol. Designed by John Browning, it was the standard issue U.S. military sidearm from 1911 to 1985. It’s use spanned through both World Wars, the Korean War, and the Vietnam War. Paul’s 1/3 scale version includes all the functions of the full-size weapon.

Paul used the knowledge gained through making his miniature tools to create very detailed lost-wax castings of the various major components. From there, many manual and CNC operations were performed to bring the parts to final size and finish. As of 2015, Paul was also working with a company that could provide a perfect representation of the original blued finish on the appropriate cast parts. An initial run of 25 models was planned for 2016. 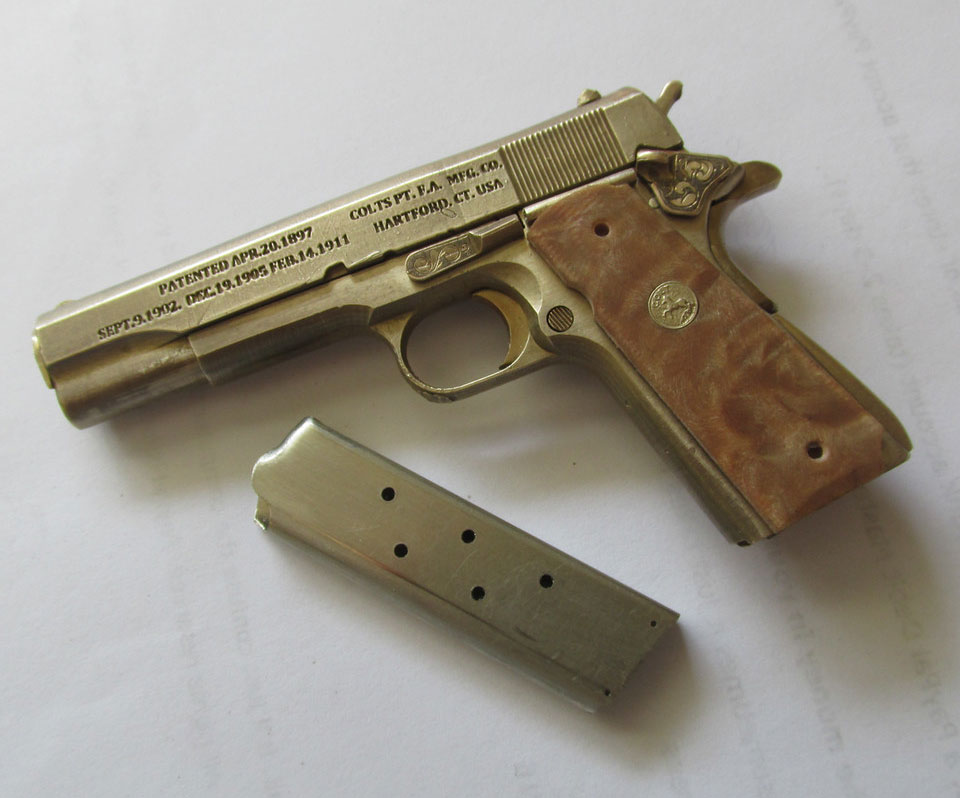 One of Paul’s finished miniature Colt pistols, and a magazine with dummy rounds. 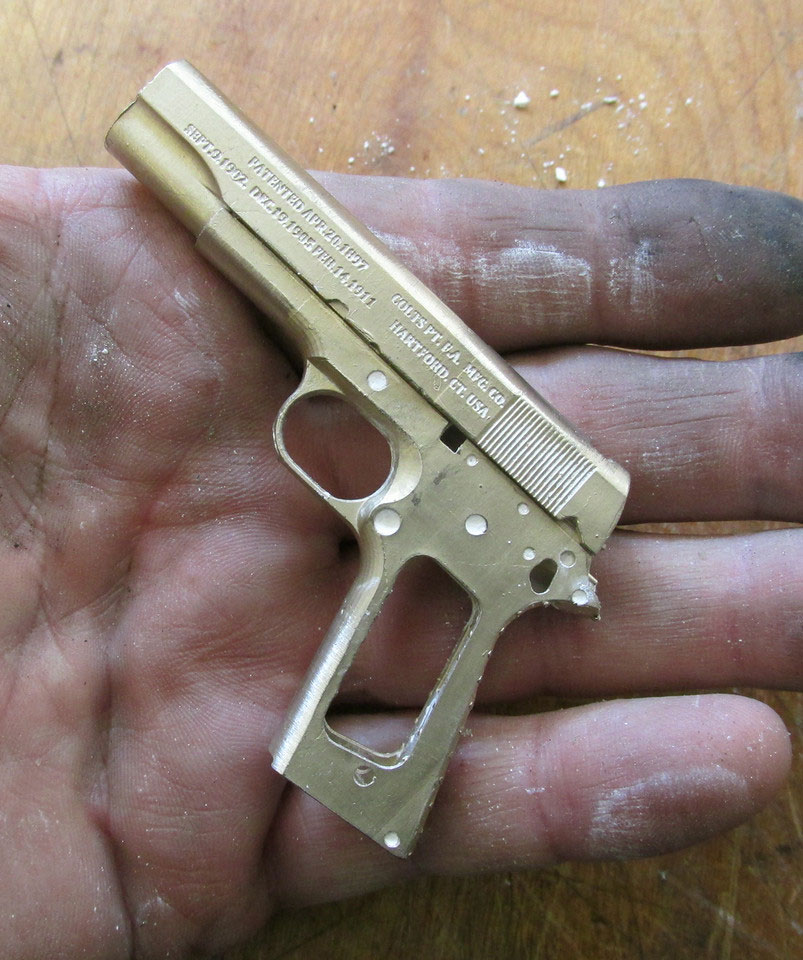 On top of all of this, Paul has introduced yet another new skill to his many talents. After a week of intensive training from master engraver Steve Lindsay, Paul began working on engraving as another option for his pistols.

For those interested in learning more about Paul’s miniature gun building process, or any of his other work, visit his personal page for a trove of pictures and information.